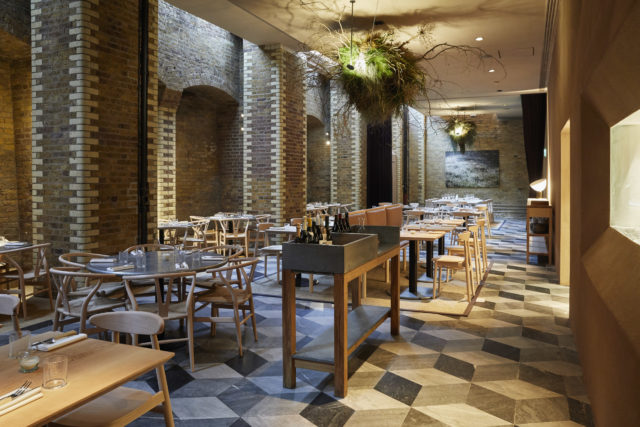 The concept: While every modern British restaurant worth its Maldon salt claims to adhere to a local ethos, Wilder practices what it preaches.

Opening last October within the bowels of Boundary – a former Victorian warehouse in Shoreditch owned by Sir Terence Conran boasting an all-day café and rooftop restaurant – Wilder is the dream of head chef Richard McLellan, and is named after his successful supper club series.

Prior to Wilder, Suffolk-born McLellan has manned the stoves at a number of top London restaurants, including Pied à Terre, Alyn Williams at The Westbury and The Typing Room at the Town Hall Hotel in Bethnal Green.

Best known for being a furniture designer, Sir Terence Conran is also a successful restaurateur and the brains behind London icons Quaglino’s,  Le Pont de La Tour and Bibendum.

The décor: Basement restaurants are a challenge to design, but the high-ceilinged, cathedral-liked space makes the most of its original features. Both the 60-cover restaurant and bar are lit by candlelight, while the exposed brickwork, earthy tones, ash wood tables and stoneware ceramics add to its back to nature character.

Suspended from the ceiling is a giant art installation crafted from foliage foraged from Conran’s Berkshire estate. Looking suspiciously like a bird’s nest, I was half expecting startled starlings to dart out of it mid meal. In place of flowers, sheaves of wheat sprout from tiny vases on the tables.

The food: Aiming to work solely with ingredients sourced from the British Isles, much of the produce is foraged by McLellan’s fair hands. Veg comes from an allotment in Clapton and edible plants from Lymington, while seafood hails from Cornwall and beef from Henley.

McLellan also makes use of produce from Conran’s 145-acre estate in Berkshire, including brassicas, game, trout and crayfish. In keeping with the changing seasons, the menu at Wilder is a moveable feast.

Staying as faithful as possible to his local approach, vinegar is used in place of lemons and rapeseed oil instead of olive oil. Featuring among the snacks are homemade pickles and home-cured charcuterie.

Signature dishes: The bar snacks were among the most exciting things we tried on our visit. A simple sounding seeded cracker arrived in a brown paper bag. The poppadum-light bubbling mass of golden shards came with a creamy pease pudding dip that was quickly devoured.

Equally thrilling was the squid tentacle tempura with a burnt cucumber dip, the silky squid and beautifully light batter lifted by the cooling dip. Packing a serious flavour punch were intensely savoury morsels of moist pig’s head on squares of sourdough. The smoked pork fat and parsley root fudge is also worth ordering as an after-dinner amuse-bouche.

Standing out on the main menu was the exquisitely crafted, subtly flavoured steak tartare that benefitted from the pleasing sour crunch of beer-braised onions. The most intriguing dish we encountered were the barbecued potatoes with salsify, yeast and scurvy grass. Creamy, decadent and super savoury, the umami-rich dish is a must for salt lovers.

McLellan isn’t afraid of richness – my discerning companion’s smoked pork jowl main was full of flavour from its flamboyance of fat, while my generous hunk of pollock came swimming in a salty broth infused with trotter relish.

The drinks: Rising star sommelier Lucy Ward, of Dinner by Heston and Noble Rot fame, is in charge of the wine list, which focuses on organic and biodynamic drops from small producers.

The by the glass offering is a wine lover’s delight, taking in everything from a racy Assyrtiko from Crete, to Tissot’s DD Arbois – a funky mash-up of Trousseau, Pinot and Poulsard.

The wine highlight was a 2017 La Fontaine Burgundy from Cécile Tremblay, bursting with strawberries and cherries, that made me yearn for summer.

Ward has just launched a Wilder Wines series of tasting events that hone in on specific regions, pairing wines to some of McLellan’s signature snacks. The first takes place on 10 March and explores the wines of Bordeaux.

Wilder’s cocktails, devised by Alan Sherwood of Little Mercies in Crouch End, are well worth a look too. My refreshing apricot highball was an ideal apéritif and cut through the richness of some of the bar snacks.

Who to know: Our artfully inked sommelier, Thamila, was as enthusiastic as she was knowledgeable about the wines.

What could be done better: Sometimes the dishes were too experimental for their own good. The oddest thing we encountered was the inclusion of beef fat in an otherwise pleasant Yorkshire rhubarb and white chocolate pud.

Last word: The food at Wilder is admirably ambitious, the dishes united by their richness and intensity of flavour. At his best, McLellan comes close to the likes of Lyle’s and The Clove Club in creating modern British dishes that prove how interesting and diverse English cuisine can be.

With its ever-evolving menu, funky wines, friendly staff and reggae heavy soundtrack, Wilder ticks a lot of trend boxes without trying too hard and shows great promise, all it needs now are a few more people through the door.