Having trained under the wing of Pierre Koffmann, Bruno Loubet and Gary Rhodes, industry veteran Anthony Demetre founded several top London restaurants, including Arbutus in Soho and Les Deux Salons in Covent Garden. He is currently chef/proprietor of Wild Honey St James and, due to a passion for aromatised wine, runs a vermouth bar in Coal Drops Yard. 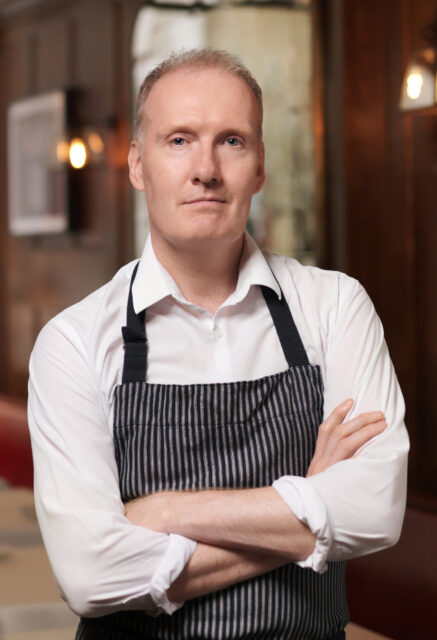 Describe to me your earliest food memory….

Helping my grandmother in the kitchen from an early age. She was a typical Greek granny – always busy in the kitchen. From the age of about 10 I’d act as her commis chef, putting egg whites into chocolate mousse; pulling the flesh from chickens. I loved both the solace of being in the kitchen with my granny, and getting away from my warring parents!

Did you always dream of becoming a chef or did you fall into it?

I signed up for the Fleet Air Arm division of the Royal Navy aged 19, but that was short-lived since I had a recurring knee dislocation from playing rugby at school. With my navy career scuppered, I decided I needed an alternative plan. I knocked on the door of Shaun Hill (of Hill’s Restaurant in Stratford-upon-Avon) for advice.

He was on verge of closing, but I worked there for a day and he pointed me in the right direction. I already had a love for food, but I quickly realised I was totally committed to the idea of becoming a chef.

What is the dish that you have created that you’re most proud of?

My squid and mackerel burger. It was so off-the-wall that people had no idea what to expect. It’s the dish that got the most media and customer attention at Arbutus, and it’s on the cover of the second edition of my cookbook Today’s Special.

What is your ultimate food and wine match?

My go-to apéritif cocktail is anything vermouth-based, especially a Negroni. It depends on my mood, though. If I’m with my wife or Michael Sodeau (my business partner at Vermuteria), sharing a meal with a great bottle of wine is great.

I love big wines made from Nebbiolo or Cabernet Sauvignon/Cab Franc blends – and the ideal match for those wines is a rich, meaty ragout (venison, oxtail or shin of beef), a slow-cooked piece of meat, or a grilled piece of seabass – anything that can hold its own with a big wine.

What is the most memorable meal you’ve ever had in your life?

I was lucky enough to have dined several times at Le Suquet in the earlier days of Michel Bras and the food was always sensational. They had a wonderful sommelier Sergio – every wine was on point, and I’ve had some fabulous Frédéric Emile Trimbach Riesling there. It’s also the place where I discovered an amazing wine called Peyre Rose.

The wine list is fundamentally classical, but they always searched for smaller, low-yield vineyards to include. My wife’s grandmother lived near Michel Bras, so we’d often pop in and have the less expensive lunch menu and then splash out on a great wine. Lunches were always packed with locals – the tourists would go in the evenings for the longer, more expensive meals.

What’s the weirdest thing you’ve eaten while on your travels?

In 1998 my wife and I decided to travel for eight weeks before we had kids. We did a tour of Vietnam and ate cobra, dog, and many other four-legged options on offer. When we were wandering around the back streets of Bangkok, we encountered a ‘bug trolley’ being wheeled around with locusts and all sorts of creepy crawlies, candied and crispy. We tried the lot – it helped that I’d had a lot of local beer!

Who is your culinary hero / heroine and why?

Great food writers – Richard Olney, Simon Hopkinson, Nigel Slater, Paula Wolford, and MFK Fisher – among others. They are all entertaining writers, but also have an in-depth knowledge of food. Chef-wise, it would be Alain Chapel – probably the best French chef and one of first practitioners of nouvelle cuisine. I love the legacy of the French masters and he was at the top of that list.

What’s the biggest blunder you’ve made while on the job?

There are so many! If you are making a custard tart or a terrine, there is no turning back if you don’t put in enough salt or seasoning. For example, a terrine en croûte is a highly skilled job – if you forget the salt you can’t add it later. Even with all my years of experience, a little distraction can occasionally mean omitting a minor ingredient that is vital.

What is your favourite season for food and why?

Spring and autumn, for different reasons, though with climate change they seem to be merging into one. For spring I love asparagus and wild garlic, and in autumn it’s all about game – any game. I love all wild food.

What single ingredient do you rely on most in the kitchen?

Garlic – I’d be lost without it. For me it’s the umami king.

What is the best bottle of wine you’ve ever drunk?

There is one really memorable one, and for a special reason. Fred and I opened a bottle of Château Latour 1983 to celebrate the birth of our first son Max in 2005. It was sublime, fantastic, a treat, and a very special experience.

What is your guilty pleasure food?

Anything with cream and butter – such as my own sourdough bread, toasted with French butter with salt crystals, and the most divine wild blueberry jam. I also love rich milk chocolate. A former pastry chef I know, now living in Chicago, has his own chocolate shop and recently sent me some of his chocolate. Sucré-salé is possibly the best taste you can experience.

If you had to only eat one country’s cuisine for the rest of your life, what would it be and why?

I love both French and Italian food, but it would have to be Indian. I crave spice – big spice – and enjoy dishes from every region of India, whether it’s street food or grilled meats or curries. One of my absolute favourite desserts is ras malai with alphonso mango and a hint of cardamom.