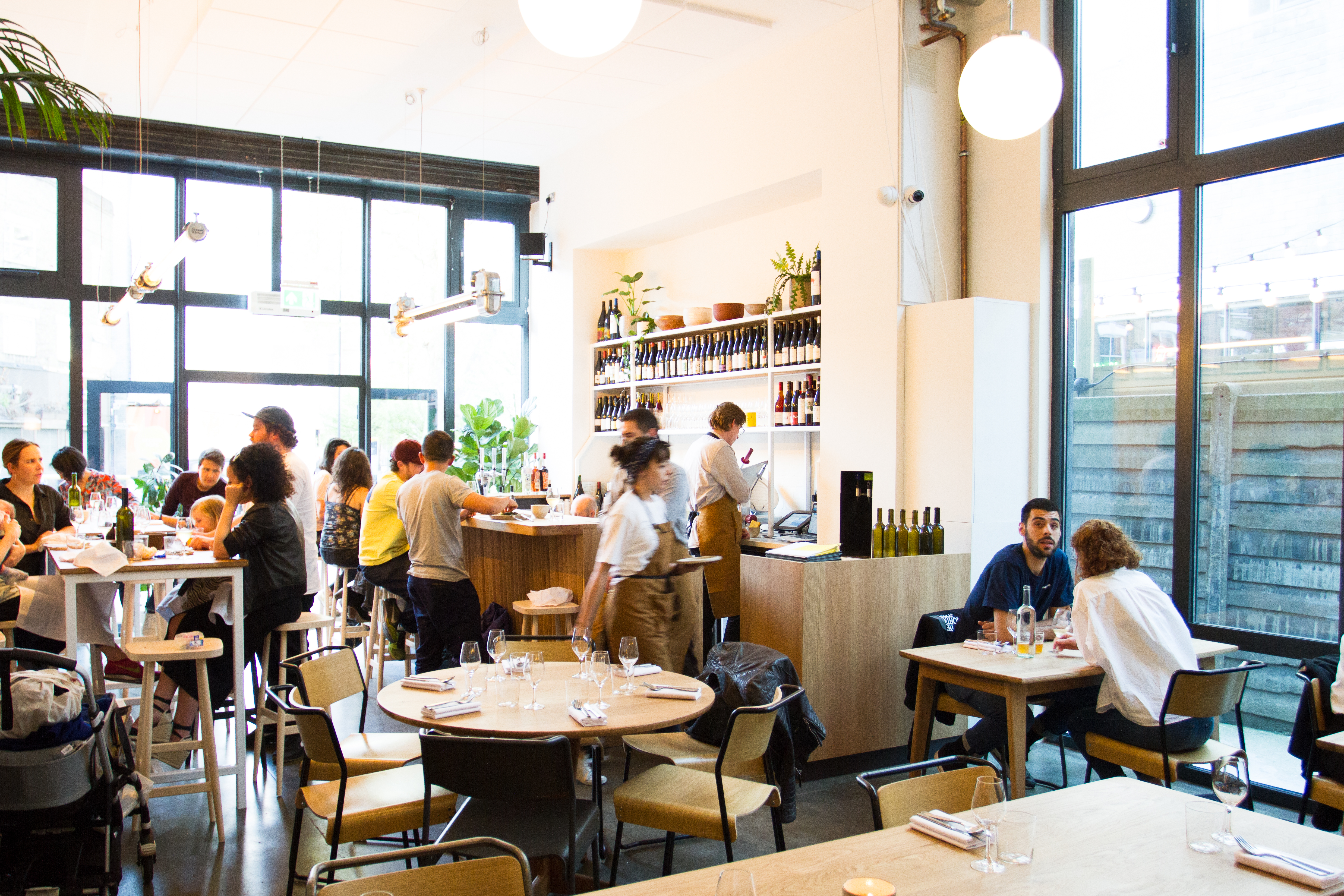 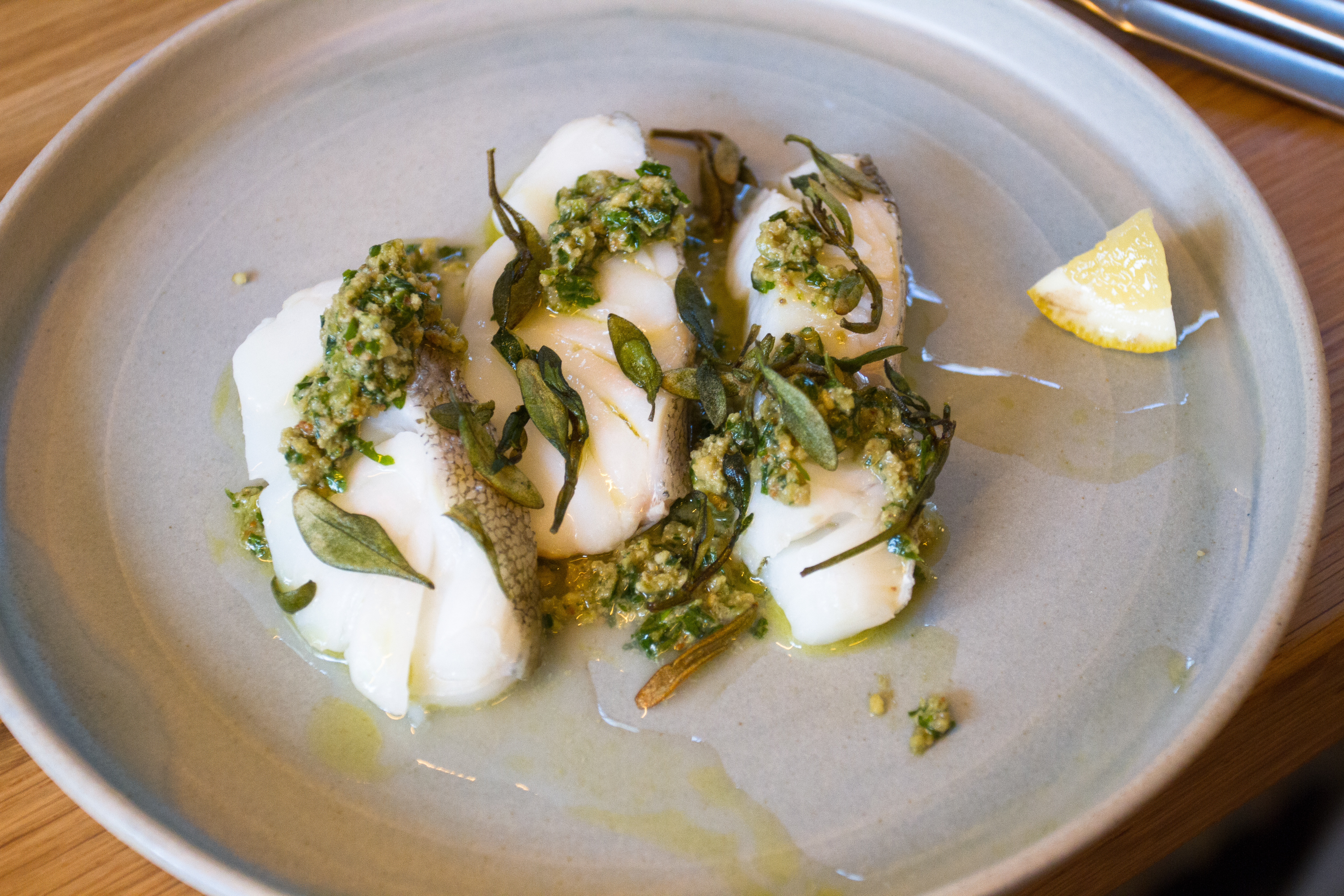 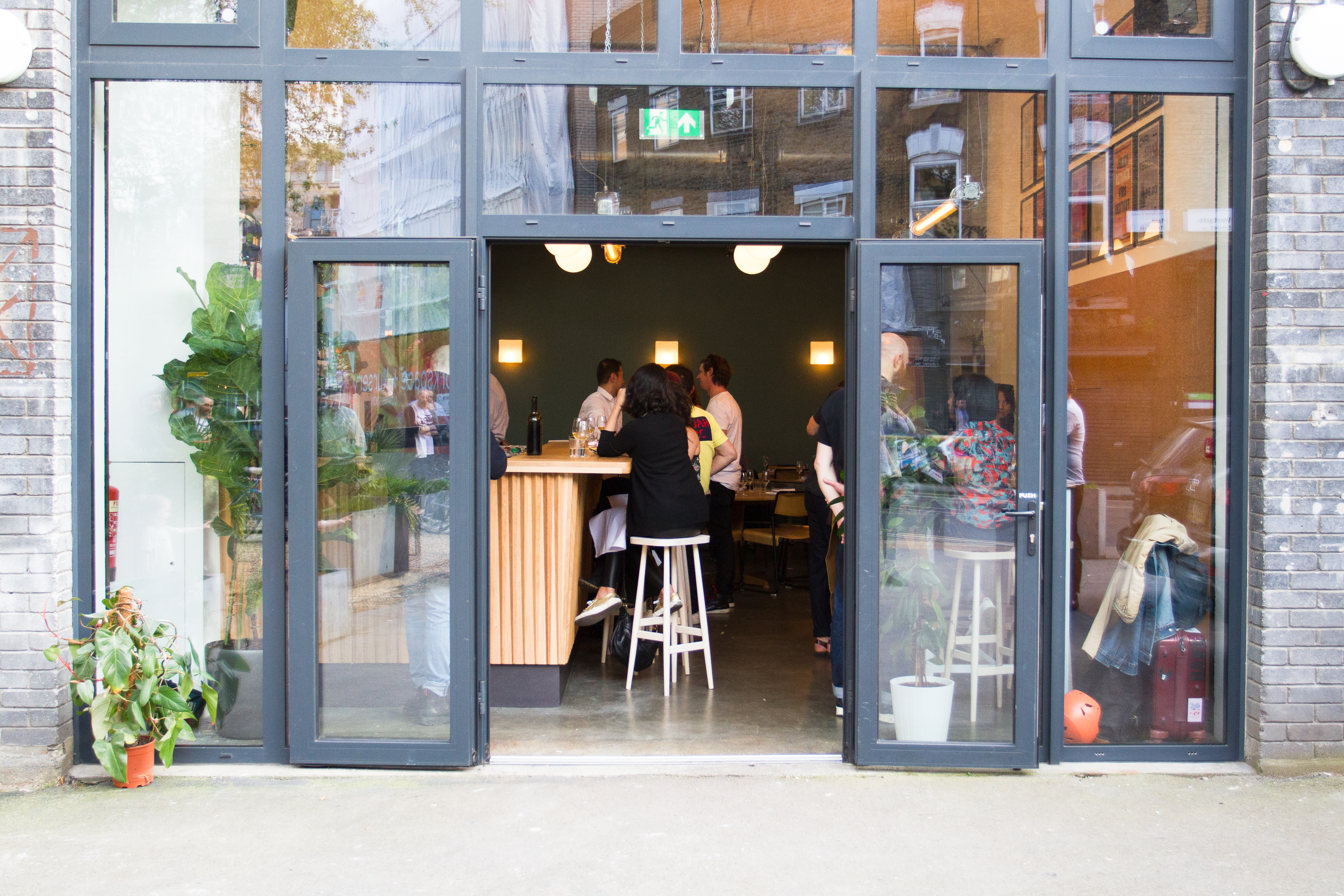 Formerly Ellory, Bright’s clean lines are brought into a glow with the help of Industrial tube lights made in Cornwall by the minds behind P.Franco and Noble Fine Liquor. Indeed, the stock is transported the short distance sometimes twice daily from the latter boutique’s cellar on an environmentally kind tricycle as part of the council’s zero-emissions trial.

Cork panels help reduce the tonal peaks of conversation while elevating the soundtrack of Nigerian psych rock, possibly inspired by a visit to the Stranger Than Paradise record store adjacent.

Phil Bracey, who “jumps back” from the term, “sommelier,” writes Bright’s pulsating fresh list with Francis Roberts. Both lament what Bracey calls, “the complete lack of transparency in wine over decades where you can add sheer amounts of things but only declare sulphur, which is natural anyway.” So what does one call Bright’s apparently honestly-made wines (which are available to drink in and take away? “Natural” is a term best avoided, insists Bracey, being “an imperfect word, best used sparingly for particular people.” Meanwhile, “minimal intervention” implies producers are “not doing a lot when they are – just in the vineyards.”

Named after a Dr. Who companion, Bracey’s graphic designer wife, Tegan is responsible for the look of the wine list at Bright as well as the seductive posters displayed within heralding historic winemaker takeovers at it and sister venues. And as a ceramicist, she formed several of the sauce pots in daily use.

The list is organised by “character” rather than country and region because Bracey prefers to “talk about the style of what I like to drink rather than geography.” In particular, he finds instances of Pét-Nats (wine bottled before it has fully fermented) “wildly fascinating” and examples such as Jean-Pierre Robinot’s L’As des Années Folles are “how I want to start my evening,” he says. Robinot is famed for having run one of Paris’ first natural wine bars, L’Ange Vin, I learn, while he also created the instrumental natural wine “bible”, “Le Rouge et Blanc”.

Another Pét-Nat to have wet Bracey’s whistle is the evocatively titled and beautifully illustrated, Fuchs Und Hase (Fox and Hare) which blends Cabernet Sauvignon and Zweigelt grapes reaped from Austria’s Kremstal, downstream of Wachau. “We go deep in Austria which has started over and is one of the most exciting countries for wine,” enthuses Bracey.

While 95% of wines are poured at the table to allow the team to explain what they are, two wines are available on draught, with one rosé listed under the categorisation, “MEDIUM-ER”. Bracey explains that “Chato Pelicano” from Spain’s Catalayud is “named after business partner, Liam Kelleher whose huge eating ability earnt him the name, the pelican!”

Honouring Bracey’s country of origin, from outside of Europe, Manon Peaches is made high above the Gulf of Saint Vincent in Adelaide by Monique Millton, daughter of New Zealand’s magnificent man of biodynamics, James Millton. It commingles Pinot Gris, Sauvignon Blanc, Chardonnay and Savagnin, “previously thought to be Albariño – a victory when it was discovered,” says Bracey.

Overall, the key to the atmosphere at Bright, Bracey says, is that he would like to think every winemaker represented on the list “should be comfortable eating here.” Served by a team clad in lived-in aprons from Bright’s friends at Labour and Wait, Redchurch Street, dishes by chefs William Gleave and Giuseppe Belvedere may include lasagna fritta, grilled oyster with lemon and jalapeño, lamb neck with young garlic, capers and yoghurt, and milk ice cream with caramel and sable.