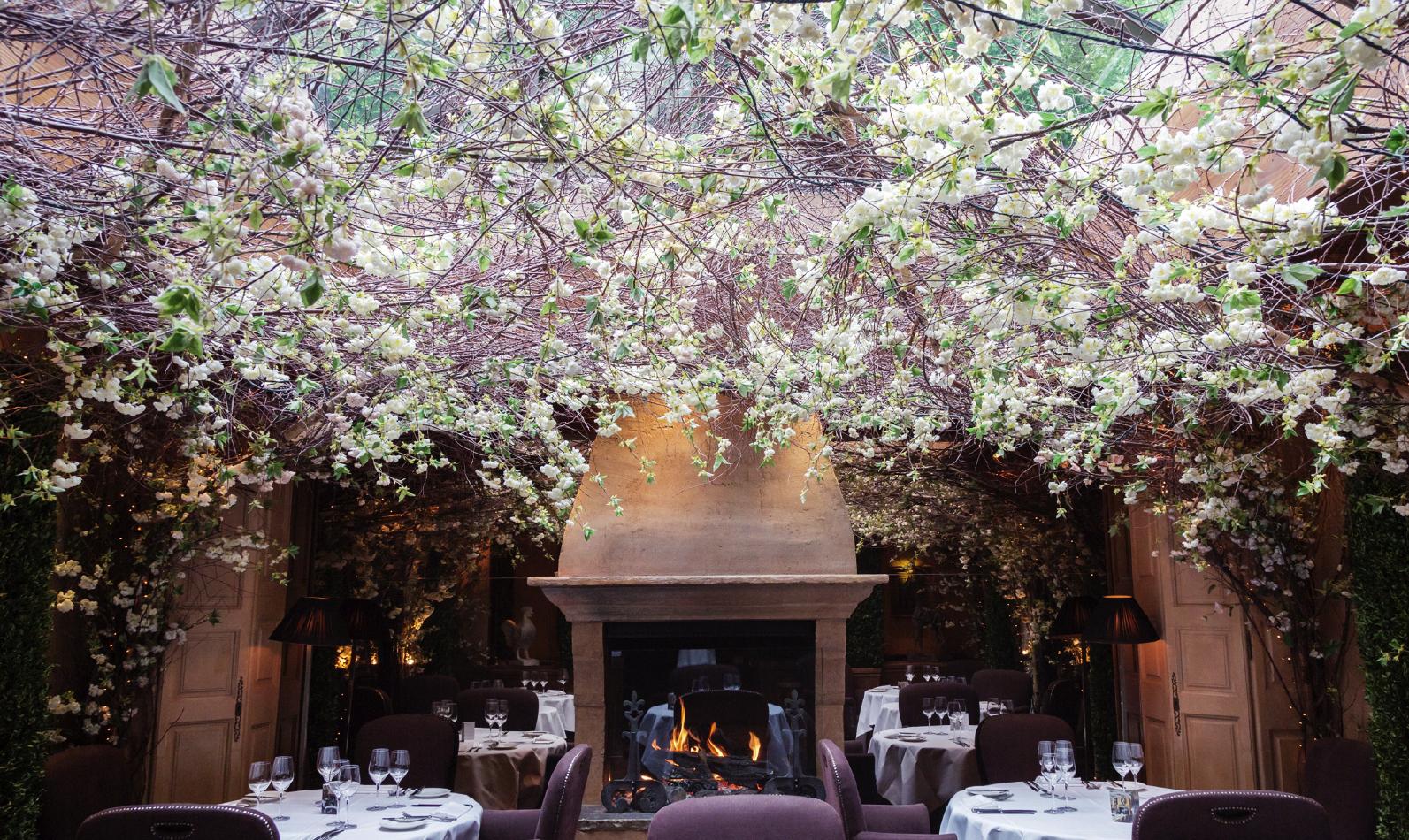 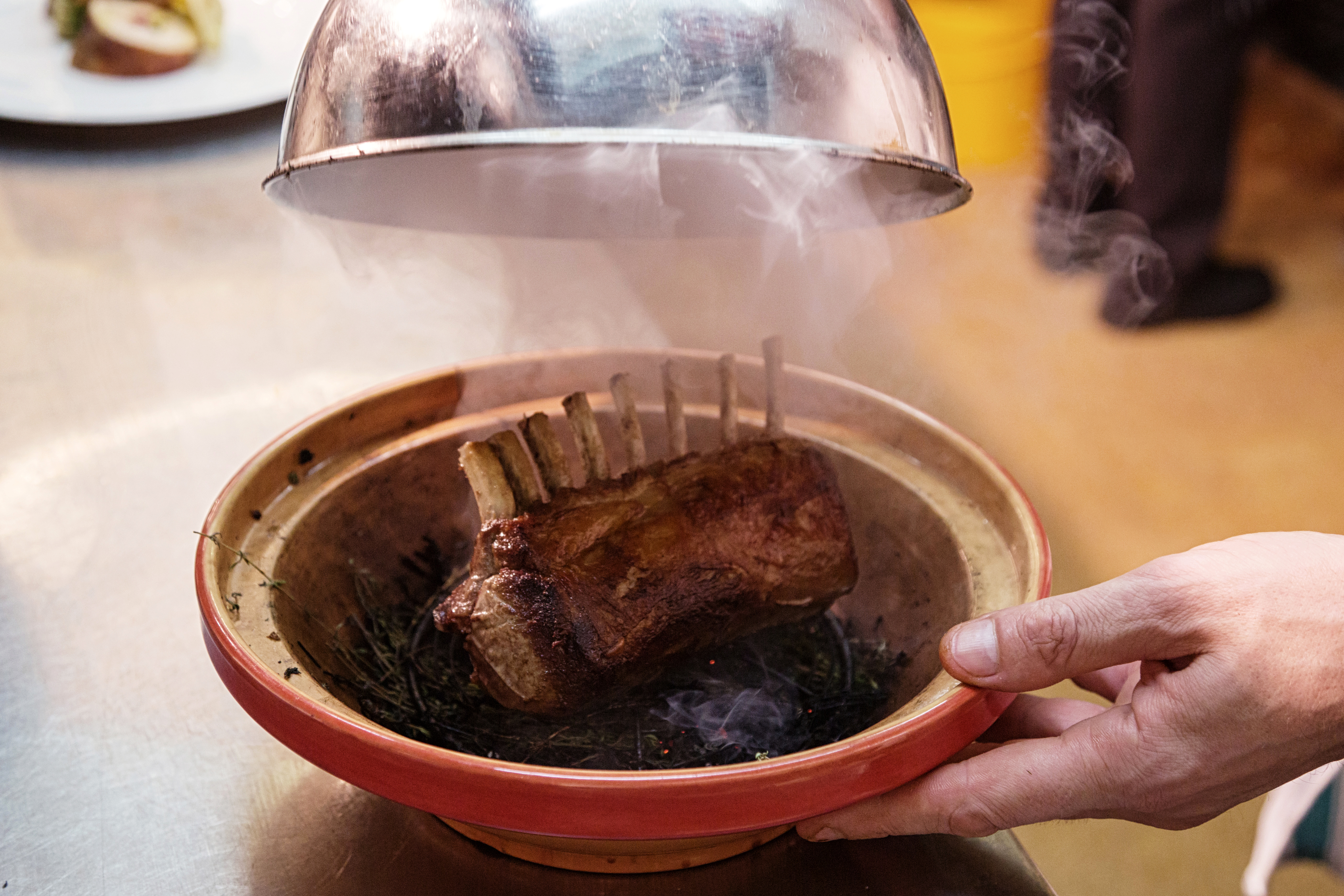 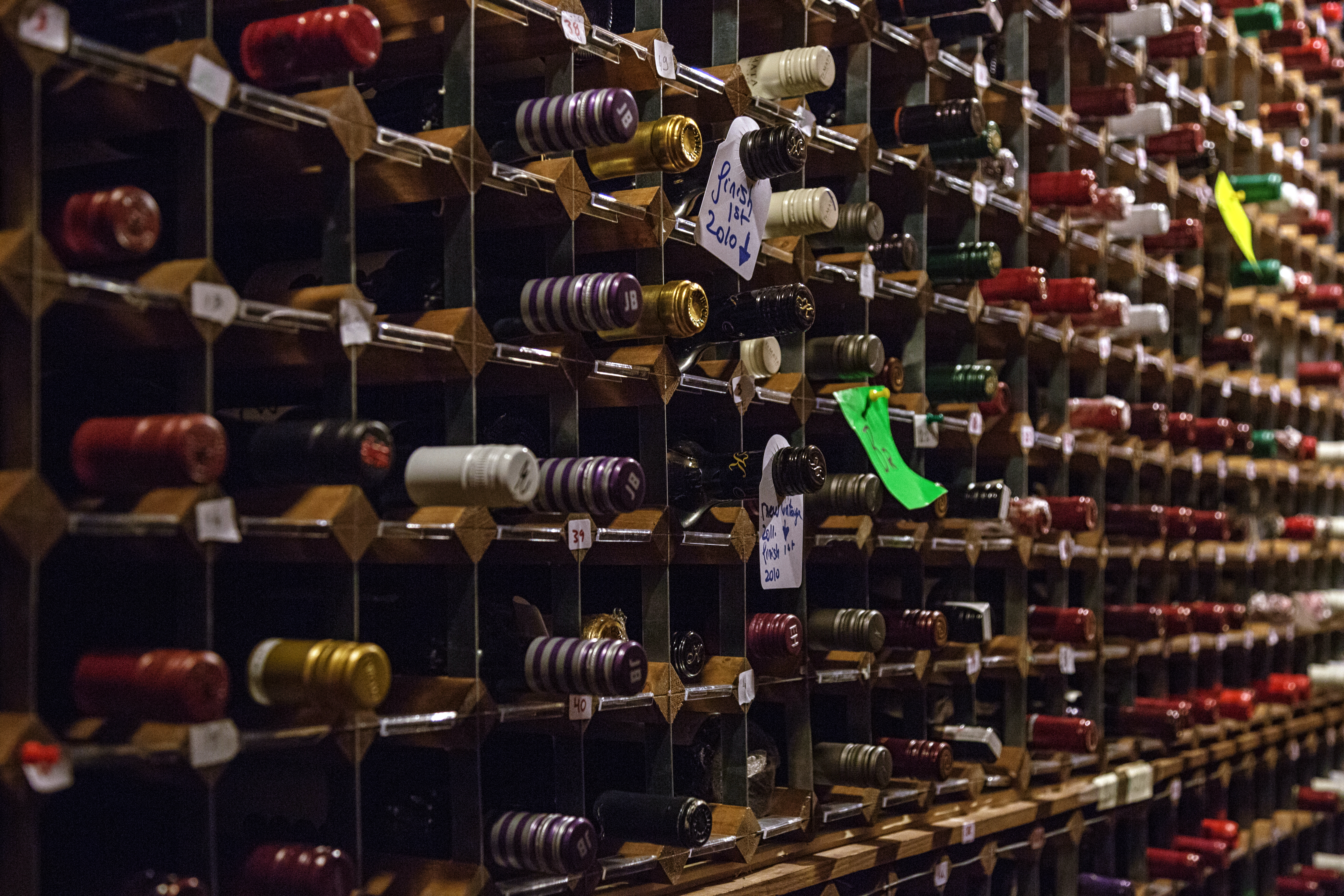 Head sommelier, Daniele Chelo oversees a depthful and very tempting list, bottles of which are kept locked high above the cosy dining rooms.

Chelo, who oversees a team of three sommeliers and has the responsibility too for the bar, “fell in love with hospitality at age 19” at Al Pont de Ferr, Milan, known for its gastrofollia. “It played with emotion,” he recalls. He came to London to learn English, “though, fairly speaking, London isn’t the best place to do that”, he admits. He rose the ranks at Jason Atherton’s City Social skyscraper restaurant, becoming a certified sommelier (Court of Master Sommeliers).

At just 25, Chelo remembers being handed keys to the fourth-floor eaves cellar at Clos Maggiores, to which he makes over 30 journeys daily fueled by adrenaline, one year ago by the outgoing sommelier, Antonin Dubuis with the advice, “take care of the hard work I did.” Although feeling very daunted at first taking on a list populated by Romanée-Conti, Leflaive, Raveneau, and Armand Rousseau, Ornellaia and Gaja, and Penfolds Grange, Chelo has gradually added “his touch” to the list, which he describes as “sponge-like” so he can keep guests stimulated. Additions include Mamete Prevostini Albareda, “a Sforzato di Valtellina made with Chiavennasca (Nebbiolo) grapes dried under the sun like Amarone.” He also amended the wine pairings, reaching beyond France. With contemporary Provençal-inspired dishes by head chef, Marcellin Marc, Chelo matches crisp, volcanic, Carricante – “Planeta 1614”, named after a particularly heinous eruption, with picked crab, smoked anchovy mayo and pickled cauliflower, and Szarka Pince’s apple-scented, incisive blotter dry Tokaj with cod, pancetta and Romanesco.

Although he enjoys London’s “city spirit,” particularly around Old Street where he lives, Chelo dreams of owning a vineyard of Nebbiolo in Italy’s Langhe, where he feels “peaceful”. When not at Clos Maggiores, he keenly surveys the restaurant scene, with a memorable meal occurring at The Fat Duck, “who contacted me beforehand to find out about my guest and I with our answers becoming part of a story on the day. It touched me emotionally even though my family would have thrown me out of the house had they known what it all cost…”

Milan-born Daniele Chelo oversees over 2,500 bins at Clos Maggiore, a tall Covent Garden venue with famously blossom-adorned conservatory, regularly touted as London’s “most romantic” restaurant. Chelo “fell in love with hospitality” at the Michelin-starred Al Pont de Ferr, Milan, and in London, rose the ranks at Jason Atherton’s City Social, where he became a certified sommelier (Court of Master Sommeliers).

Chelo fondly remembers the moment he was handed keys to the temperature controlled fourth floor eaves cellar from outgoing sommelier, Antonin Dubuis. “A nice, friendly speech: the juice of it was he was truly happy to give me the keys of the cellar and the ‘baby’ (Wine List) to take care of after the hard work he did. We finished celebrating at home with some good Champagne, wine and friends.”

Chelo has been gradually adding “his touch” to Dubuis’ list, with additions ranging from £30 to £2,000 per bottle, including: Guigal St. Joseph Lieu-Dit, “an incredible, powerful Marsanne”, Matias Riccitelli Republica del Malbec, “a beautiful option for Malbec lovers”, Mamete Prevostini Albareda, “a Sforzato di Valtellina from my region and therefore a love story between us. It’s made with Chiavennasca (Nebbiolo) grapes dried under the sun like Amarone.” Chelo also put Château Pape Clément Blanc 2006 by-the-glass via Coravin.

Clos Maggiore plays host to regular symposiums including Dom Pérignon and Napa’s Cakebread Cellars. “I couldn’t resist listing a few vintages of their Dancing Bear Ranch.” However, “the best is yet to come,” teases Chelo.

Chelo dreams of owning a vineyard of Nebbiolo in Italy’s Langhe, where he feels “peaceful” and “so amazed by the landscape.” The people and food just complete the dream scenario.

The list opens with a quote from Hemingway’s Death in the Afternoon – ‘Wine is one of the most civilized things in the world and one of the most natural things of the world that has been brought to the greatest perfection, and it offers a greater range for enjoyment and appreciation than, possibly, any other purely sensory thing…’

Evoking a French Ben Stiller in profile, guardian of the list, Antonin Dubuis has led a starry career, including Maze, Yautcha Soho, Yautcha City (which he helped open), and, immediately prior to being headhunted by Clos Maggiore, The Greenhouse – which boasts circa 3,600 bins.

The Brittany born Dubuis has a clear idea of the role of the sommelier. ‘Wine is a part of your meal and can’t be left to amateurs.’ He particularly laments uninformed service. ‘Guests aren’t always getting the service they’re supposed to in London, mainly due to a lack of knowledge and can therefore be surprised when they receive attention having forgotten they’re there to be looked after.’

Dubuis is particularly proud of his work in making the considerable Burgundy section more accessible. ‘When I arrived at Clos Maggiore, all the big names were already there. So I had to fill the gaps, hunting wines which don’t require a mortgage to drink, with a maximum cost price of £25.’ The resulting sub-section, entitled ‘The Big Little Burgundy’ is popular, collecting Bourgone Blancs from top domaines (Domaine Leflaive) as well as rising stars (Domaine Pernot Belicard Merusault) for £100 or fewer, ‘so people are not frightened to go for a bottle.’

Another of Dubuis’ missions is to include mineral, balanced Italian Sangioveses ‘which are far from Parkerisation,’ such as Rocca di Montegrossi. ‘Technically, Sangiovese shouldn’t be picked overripe because after 10 years it will be dead compared to the likes of the fine grained Biondi Santi.’ And on Massetto, Dubuis shares his assistant sommelier’s comparison to whisky. ‘An amazing marketing product, it’s not the Italian Petrus – that’s a lie. It doesn’t have the finesse.’

In terms of the new world, perhaps on account of Dubuis’ French accent, some guests show surprise when they encounter North American wines via the matches on the tasting menu. ‘They say, “but you’re French? Are you sure?” Indeed, Dubuis notes, if a guest wishes to part with £400 on a bottle, it is more likely to be spent on Bordeaux than California, ‘but maybe they should try California?’

Dubuis also relished the recent re-discovery of Australian wines such as Tapanappa’s Foggy Hill Pinot Noir. ‘I am impressed by how these wines have become more refined with a dramatic increase in quality while remaining kindly priced, which leads me to believe Europe needs to wake up before it’s too late. I love Burgundy, but my salary doesn’t increase, and the older you get, the more you drink because you become more and more resistant to it, and look for alternatives you can afford on a regular basis without making a compromise on quality!’

One of the most substantial re-orders Dubuis makes, which has suprised the owners of Clos Maggiore (The Big Easy group) is of Vin Jaune to pep cheese. ‘And, unfiltered, Warre’s ‘04 LBV is amazing with a medicinal, herbacious, freshness.’ Dubuis is also a big fan of sherry, Madeira and Marsala, offering the option of smaller serves (75ml) with, or instead of, puddings, ‘to allow competitive pricing, smaller glasses mean guests can justify treating themseselves.’

On seriously smarter wines, Dubuis applies a cash margin, ‘not GP, otherwise the cellar becomes a museum. What’s the point in having one of the biggest wine lists in the UK but not being able to sell it?’ Compared to his previous employer, The Greenhouse, Dubuis believes his list, which includes a vertical of Jacquesson, Bollinger’s Vieilles Vignes Françaises, Moutard 6 Cépages which is ‘very unique for the price’, and Moet et Chandon back to 1964, ‘is a bargain.’

Theatreland’s most romantic restaurant can still boast one of the largest lists in the UK. Its 2,500 listings from 18 countries include some extremely impressive verticals of first growth Bordeaux, Super Tuscans and Romanée-Conti. It has also been particularly strong in its Californian selection for some time.

Some might find it quite intimidating when this hefty, 100-page tome is placed on the table. It could even be deemed ‘anti-social’ given the silence that can drop while the list is examined. It is nevertheless a spellbinding collection to complement delicate dishes such as native lobster, scallop and king prawn tortellini poached in langoustine bisque, and roasted Wagyu beef from Kyushu Island, Japan.