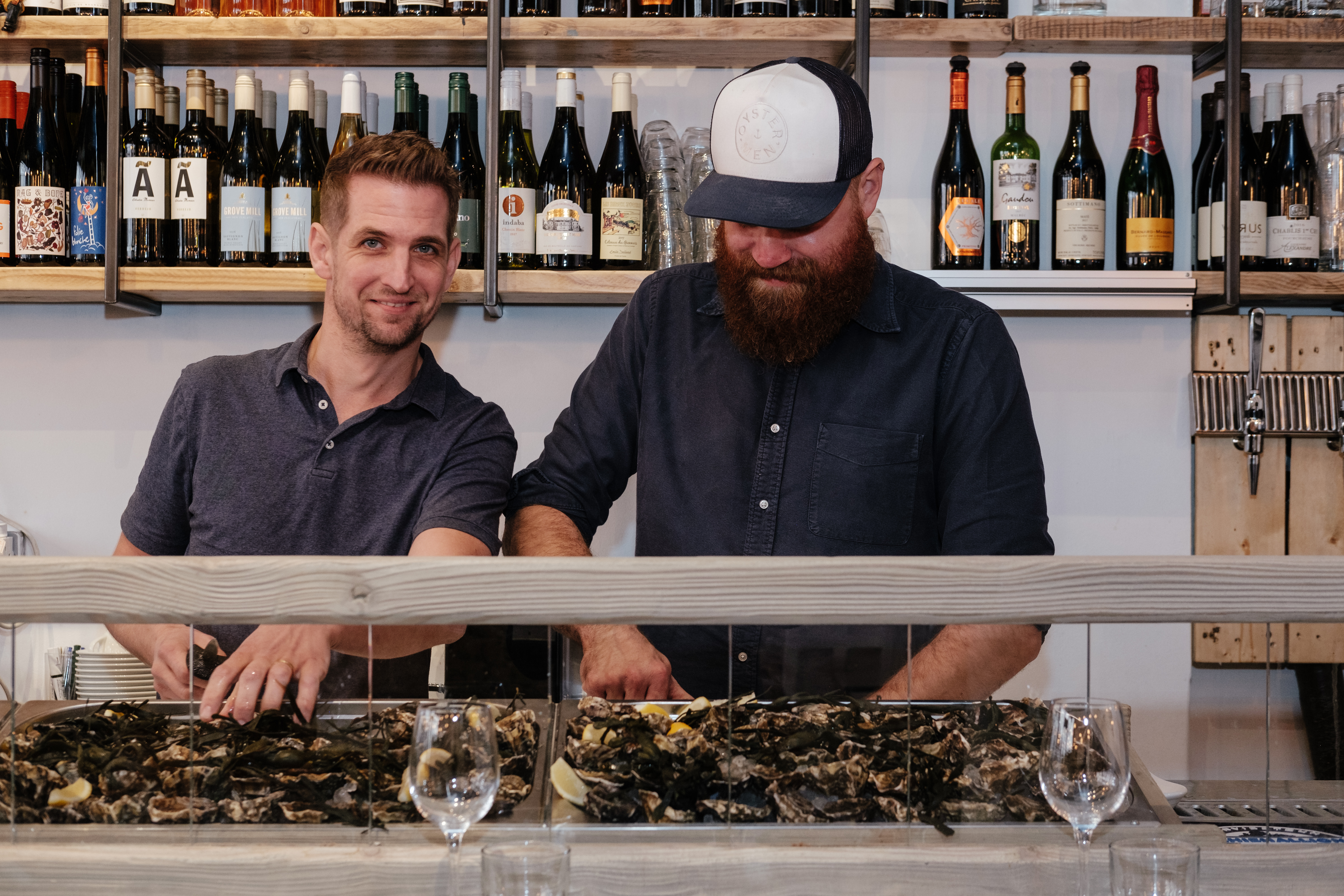 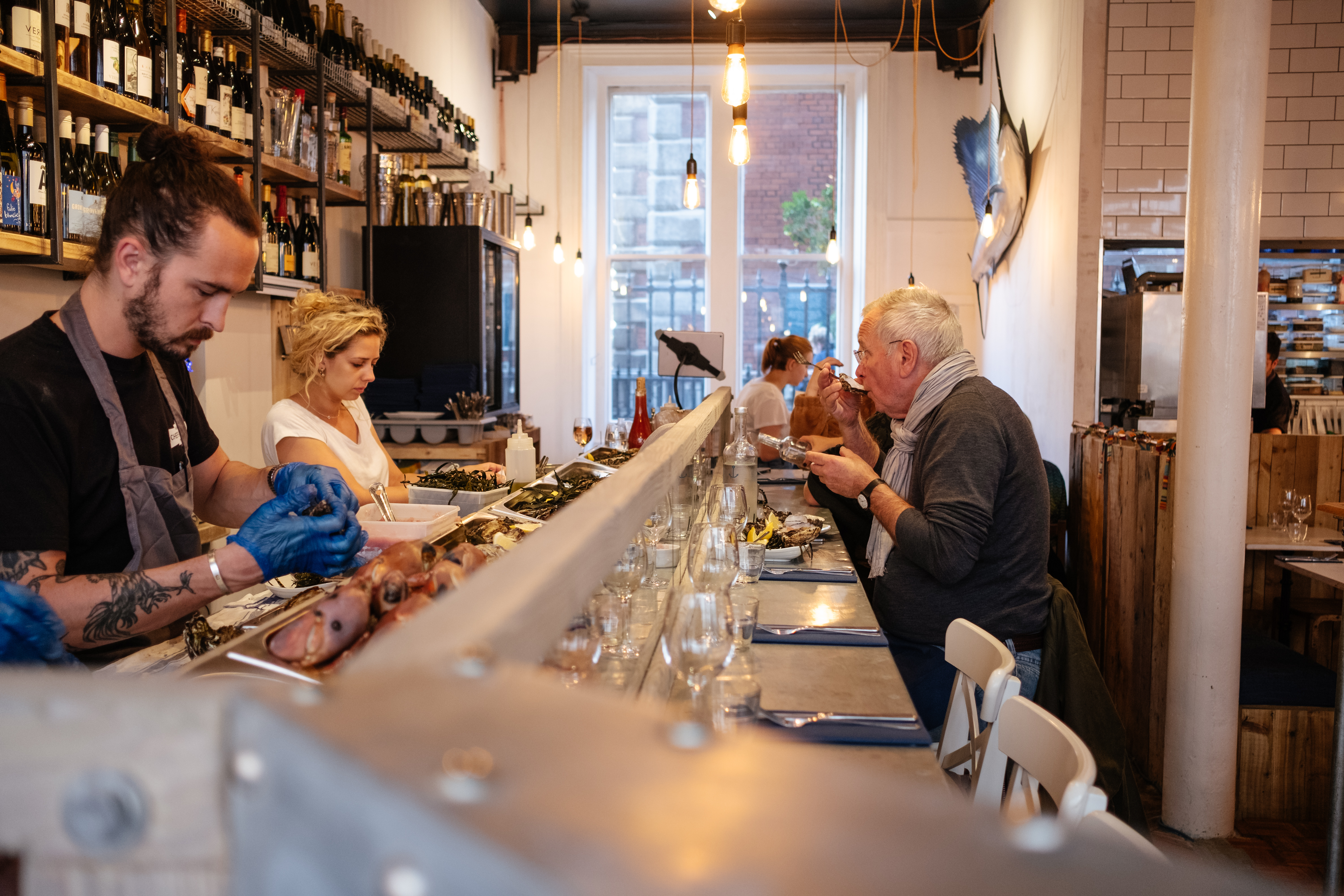 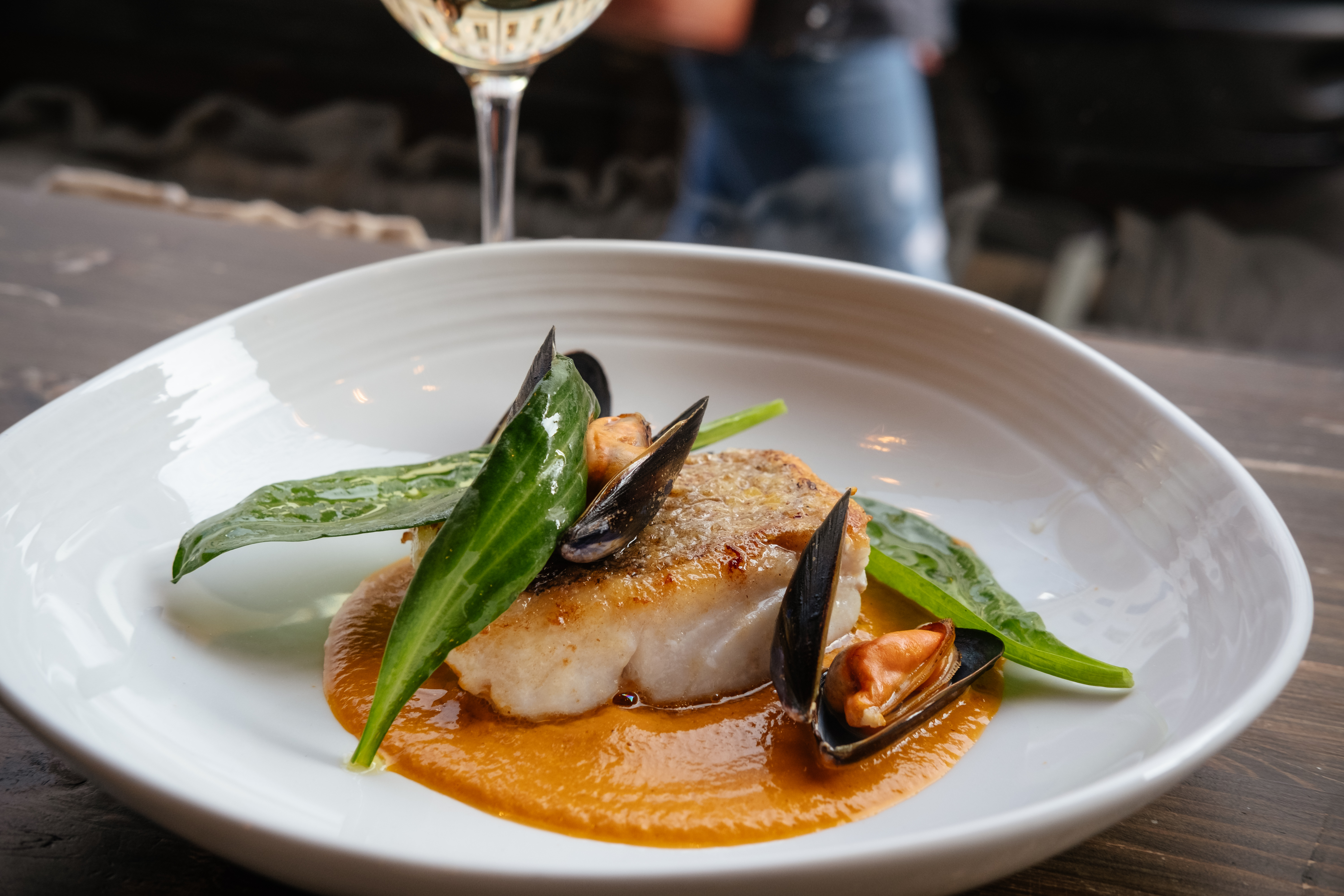 An excellent place for oysters and thoughtful ABV matches, The Oysterman in Covent Garden is brought to you by a duo who respect the fruits of the sea.

The ‘bearded half’ of The Oystermen, Rob Hampton, and clean-cut, Matt Lovell bonded over a mutual love of seafood, ‘particularly oysters’, says Hampton, and ‘an absolutely shared’ vision of hospitality. He adds: ‘we were tired of overly formal seafood restaurants in which oysters got trapped, wanting instead to create something casual and fun, but still with the finest quality food and wine and proper service.’

The recent enlargement of the bijou site on Covent Garden’s Henrietta Street, featuring a bar by a master boat-builder, allowed the team to double their wine offering, ‘increasing the amount of sparkling wine,’ says Hampton. ‘We wanted to avoid the obvious kind of Prosecco and Cava and go for something thing a little different, such as sparkling Gavi or sparkling Txakoli.’ This has also allowed them to fulfil the raw bar ‘we dreamed of,’ featuring a much larger variety of oysters.

As well as time-trodden wine and food matches, such as soft, buttery, long lees contact Muscadet with oysters, wrong, the duo are ‘really quite up for new things.’ Hence, Rotgipfler from Austria. ‘For a landlocked country, Austria produces amazing wines for more wintery seafood dishes. A touch of spicy pear and almonds… perfect with plaice à la meunière,’ says Hampton. And with firmer fleshed fish such as cured seabass, realised by head chef, Alex Povall, ‘Pinot Gris from Slovakia (Ormoz) is an absolute winner, with soft acidity and rounded stone fruit.”

The team has tended to avoid obvious, fashionable Picpoul and Albarino, opting instead for a perhaps forgotten Folle Blanche, says Hampton. ‘With a taster, immediately providing a more interesting (and better) food pairing. I guess it’s about trying to bring people slightly outside their comfort zones as opposed to radicalising their drinking!’

Note, too, the fine selection of spirits, including smoked rye bread schnapps, from the duo’s friends at Snaps + Rye, bringing waves of umami to Maldon oysters, leading to what Hampton calls ‘a salty baseline’. Also try ‘Everyday Oyster Stout’ collaboration brew with Canopy Beer Co, and the exhilarating, sweat-inducing Scotch bonnet-infused Bloody Mary which apparently made a Japanese tourist cry…

Co-founders, Rob Hampton and Matt Lovell believe in sourcing British ingredients where possible, paying their bills “dead on due” and rewarding regulars with a glass of wine and/or an oyster rather than enticing them back with discounts at The Oystermen. Located on Covent Garden’s charming Henrietta Street, the now expanded but still bijou and certainly special busy venue features a hull-like seafood counter crafted by a Welsh master boat-builder upon which rest whole brown crabs. “We sell 180kg of crab over a weekend,” says Lovell. There is also a model marlin gifted by a customer whose wife disapproved of it being at the family home, and rare fish-themed cigarette cards. In the open kitchen, the team have moved over to induction cooking resulting in a “much nicer environment.”

More space means more wine, although not for reds. “We’ve pulled it back to five options given our wonderful Kiwi Pinot from Kumeu River makes up for 85% of red sales,” says Hampton. The team also “got into bed” with the importer, 266 Wines, says Lovell, “which helps us get at bits we were struggling to find such as our Crémant.” They are also able to supply, wholesale, venues such as Noble Rot, Leroy and 45 Jerymn St. with their discoveries. The team tends to avoid the obvious and fashionable hence the presence of premium Txakoli, Slovenian Pinot Gris and an Austrian Riesling. The duo has, however, been dabbling in purchasing tremblingly “expensive” Burgundy en-primeur. And, coming soon, sherry is on the “to-do list.”

As well as the fermented grape, Lovell relishes introducing guests to brews, especially sake and oyster matching, often via flights – hence the four-day pop-up in Shoreditch supported by the Japanese government. A spectacular match at The Oystermen is Yauemon “Autumn Leaves” sake and premium, eponymous Louët Feisser oyster from Ireland’s Carlingford Lough, whereby the “rich, umami rice flavours mingle with the salty flavours of the oyster flesh, leaving a distinct and lasting flavour on the pallet.” However, Hampton laments the fact such specimens are getting harder to find in the UK, because “they sell for much more money in Russia and the Far East.” Be sure, too, to partake in a half of the Everyday Oyster Stout, a brew in collaboration with Canopy Beer Co, “who took on a new arch.”