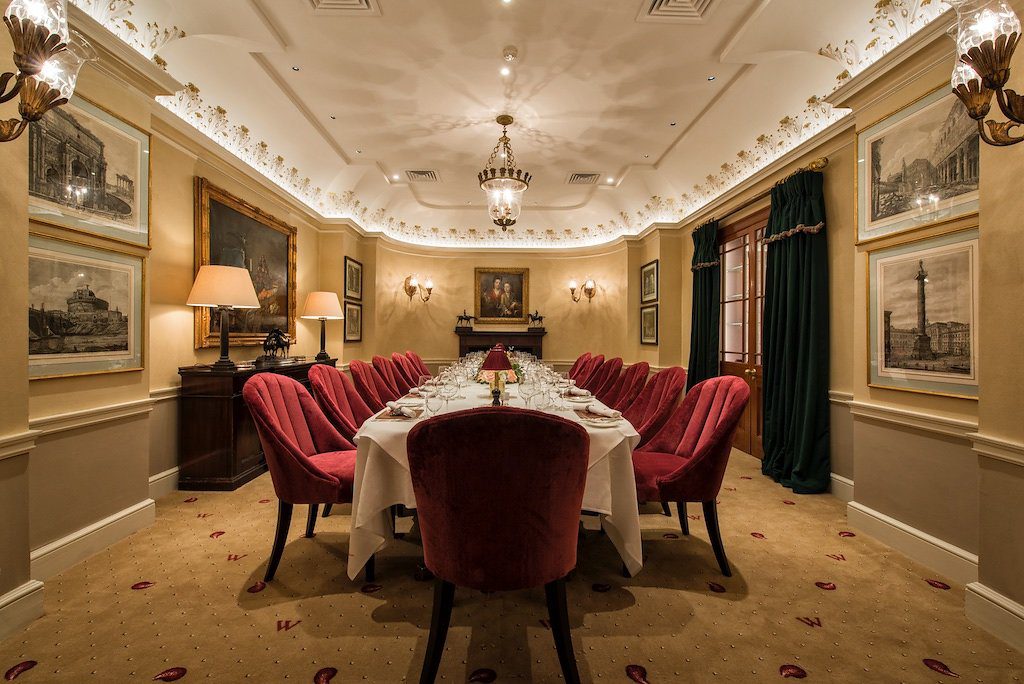 A grande dame of Mayfair allegedly once bought by a customer who insisted that the restaurant should be added to their dining bill...

With “nannies” rather than waitresses, much-coveted booths, and a champion oyster shucker, Wilton’s is a Mayfair stalwart, existing since 1742, albeit over more than a dozen locations in the vicinity

Evoking a version of the actor, Martin Freeman, mine host, Jason Phillips could pen a history of British hospitality, rising through The Savoy’s talent school then working at The Lygon Arms, Simpsons In The Strand and The English Garden. He was instrumental in stripping Wilton’s sister site, Franco’s back to its shell and rebuilding a once humble eatery into a pampering restaurant. “It had been a mafia hangout with a walk-in safe in the cellar to store all the cash,” he notes. When Wilton’s “should have been doing six knots, but was going four” Phillips trimmed the sails, so-to-speak, “and suddenly we were doing 6.5 knots. Nothing had changed to those standing on the shore, but in fact, everything had changed.”

Phillips did controversially relax the jacket and tie policy for gents, though, “although 90% still wear jackets”, and extended the menu, including more affordable dishes like lemon sole while keeping Dover sole, and reinvigorated the wine list, “which had been super, super precious”, introducing a page of kindly priced wines by the glass in addition to the premium offer.

The list is predominantly composed of classic regions, from the long-standing relationship with Beaumont des Crayères who author their 275th-anniversary cuvée of Champagne to verticals including Mouton Rothschild, and d’Yquem back to the late 1950s. “Our guests often tick off the vintages they drink and take pride in educating the sommeliers,” says Phillips.

Newly appointed Columbian sommelier, Paola Giraldo (formerly of Hakkasan, Mayfair) has increased her Hispanic selection, bringing on labels from Viña Ardanza, Castillo y Gay, La Rioja Alta, and a Bierzo from José Palacios. She has also sourced a still, Essex-grown Pinot Noir Rosé made in a Battersea railway arch (Black Book) in addition to Gusbourne’s Kentish fizz (which costs more than the Crayères!) She is also seeking Rieslings from Germany and Austrian Grüner Veltliners to expand her repertoire when it comes to food matching with smoked salmon, oysters and langoustines from the bar, or an individual beef wellington served on a signature lobster in bowler hat motif plate by head chef, Daniel Kent (formerly of Lutyens and The Wolseley). “My ambition is to help break the wall of our guests’ expectations, giving them the option to discover different regions.”

As well as the famous carving trolley, valuable spirits are conveyed to table on wheels, including Martell’s 1906 Cognac and Louis XIII – in fact, Wilton’s has one of Europe’s highest depletion rate on the latter.

Wilton’s are particularly strong on halves, to the extent guests often “regret not ordering a full bottle,” says Phillips. Magnums are also a growth area, bringing bonhomie to the fixed price “wine package” offered for board lunches, perhaps in the symmetrical private room. “We will also open a magnum of Rhône every now and again to offer guests a glass with grouse. A tiny bird and huge bottle…”