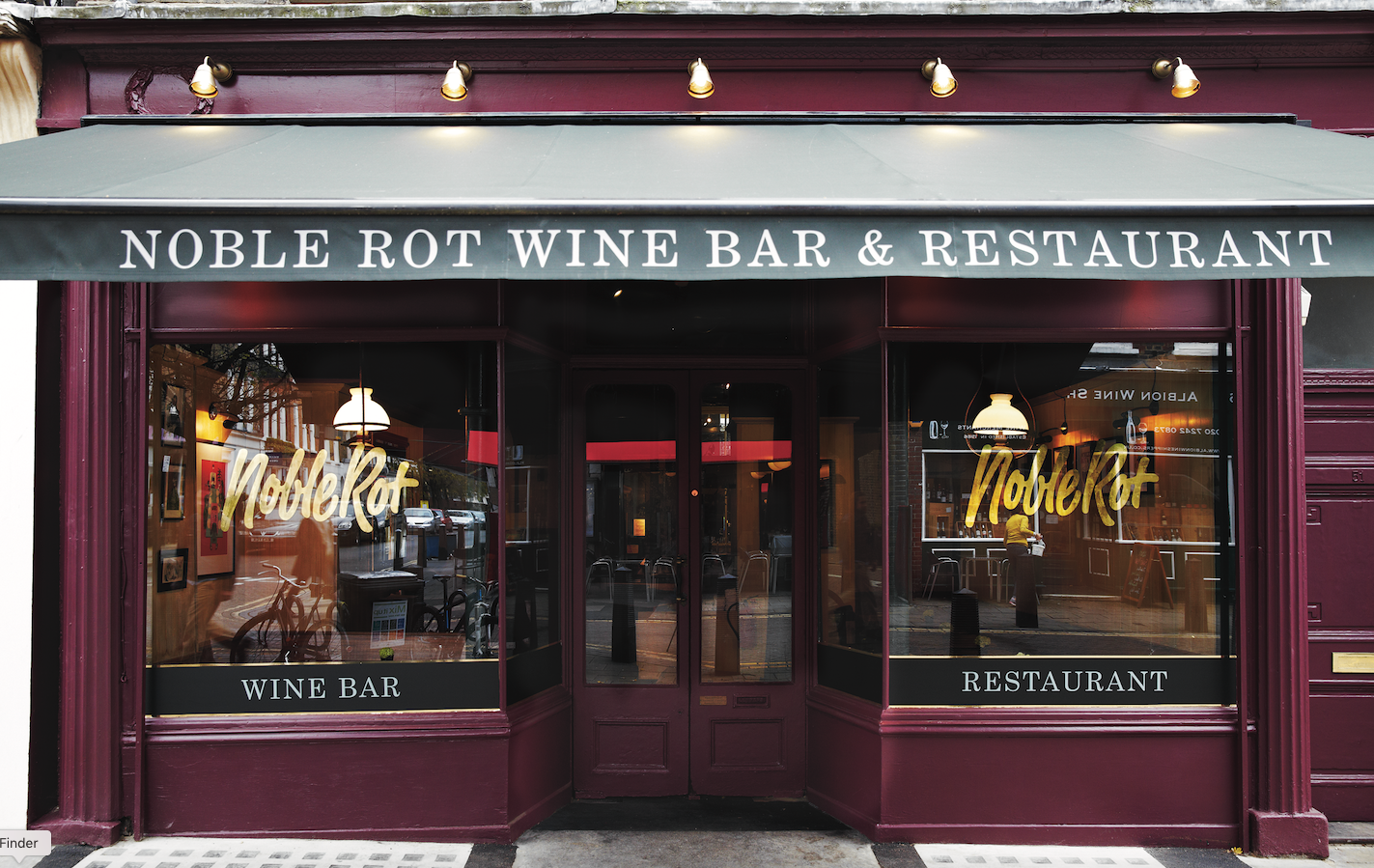 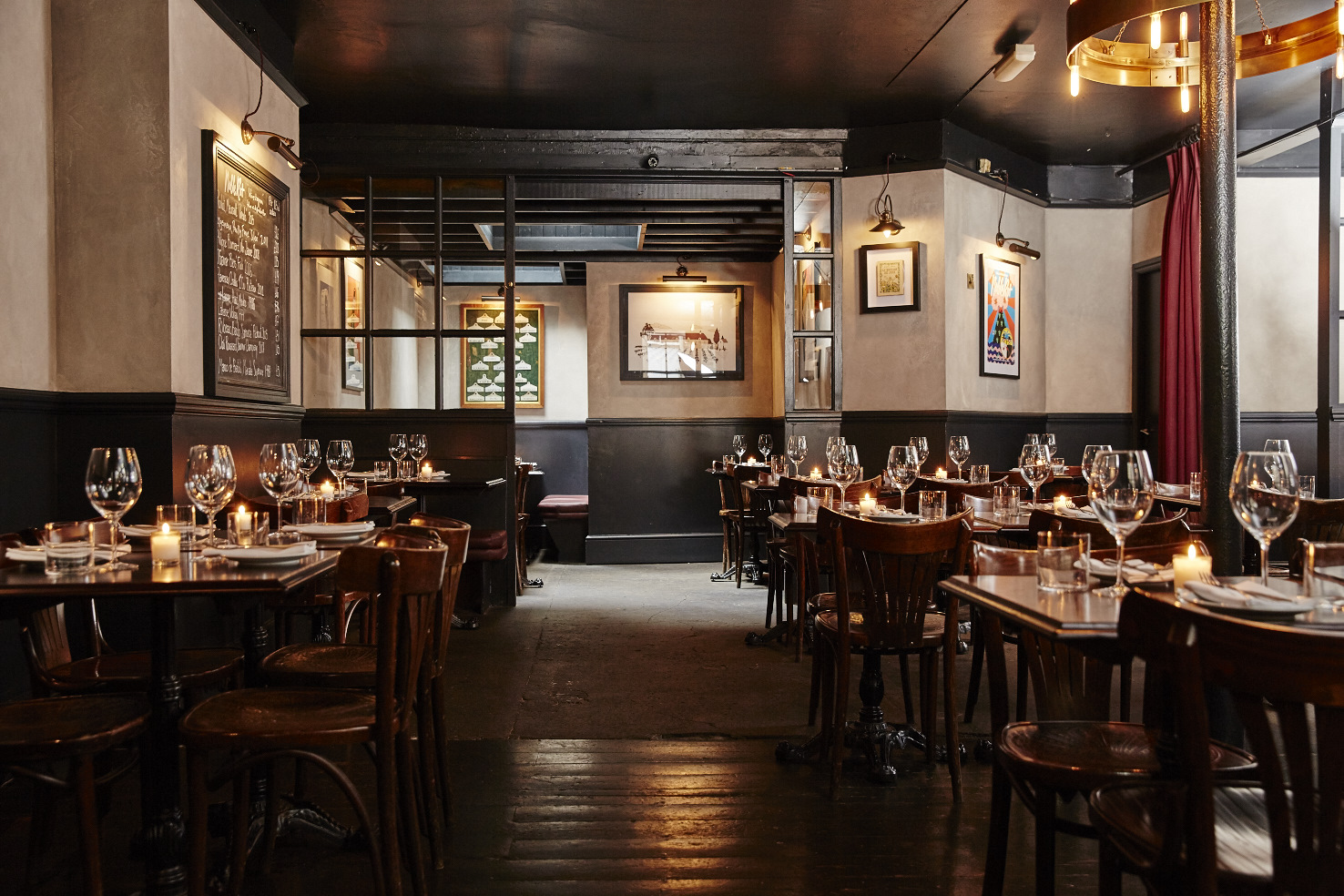 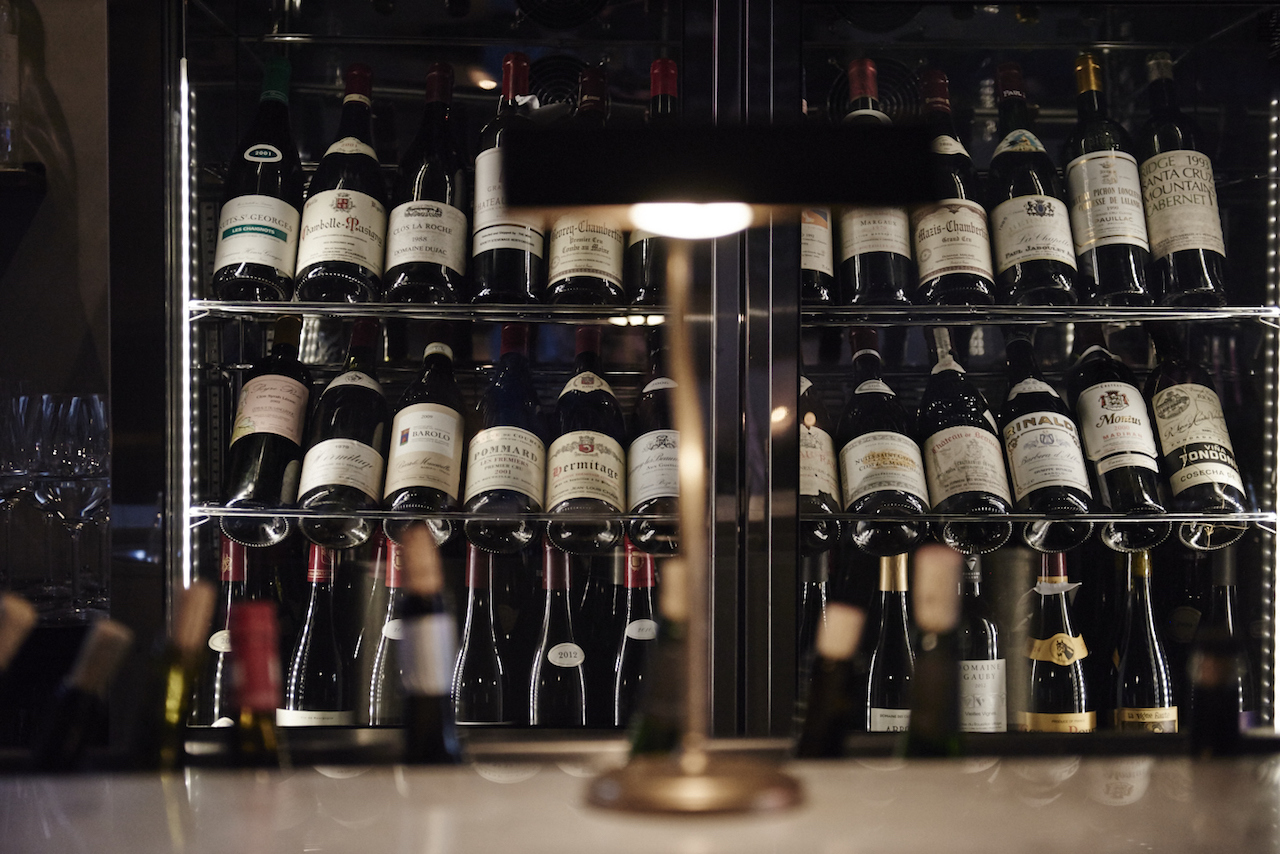 Chefs, Stephen Harris and Paul Weaver from the Michelin-starred The Sportsman in Whitstable offer "Franglais' plates in this homely, Parisian-style wine bar in Bloomsbury.

Previously Vats, which Australian sommelier, Josh Castle called, “a late-night boozer for lawyers,” today’s much souped-up version of Noble Rot is brought to you by dynamic duo Dan Keeling, former MD of Island Records and head of Artists and Repertoire at Parlophone, and Master of Wine, Mark Andrew. Previously head buyer for Roberson wines, Andrew’s research paper, “How can dry Assyrtiko from Santorini establish itself as a recognised ‘fine wine’ in the eyes of London’s premium on-trade?”, ensures plentiful filigree versions of that grape are included on the tremendously exciting wine list. That document, supplemented by a daily specials Coravin board which causes wine aficionados to “drool,” says Castle includes wines hitherto available only on merchant allocation.

Castle studied art and believes, “wine and art are similar, both being collected cultural artefacts.” To calm his student debt, he worked at City Wine Shop, Melbourne in a “warren-like tall building” opposite Parliament House which includes The European restaurant and its defiantly old-world wine list. He also staged at Joran winery, Stellenbosch “as part of a small team doing a big harvest, getting a chance to do everything.” His first job in the UK was at the Oxford Wine Company, being “a soft landing into the UK.” However, Noble Rot would better sate his thirst for vinous “esoterica” alongside rested wines from classic, hallowed producers. “When I came for the interview, they’d just received the Fourier order for that week and my eyes lit up. In at the ‘pointy’ end!”

Castle helps ensure a plentiful supply of desirable wines between £50-60, “which is where the trade drinks at,” including a “swollen” Beaujolais section, and, in honour of a previous employee who has gone to work there, the skin contact Ageno from La Stoppa. The downtime of the lockdown enabled the team to renovate guest bathrooms. “Since lockdown we’ve noticed that drinkers have become more adventurous, and so stocked up with an extensive range of minimal intervention wines from Tenerife, Greece, Hungary and South Africa.”

Alongside the wine bar and restaurant is the well-established Noble Rot magazine, featuring a starry list of contributors and provocative artwork.

Realised by head chef, Paul Weaver are the dishes of consultant chef, Stephen Harris of Whitstable’s The Sportsman. These may include Yorkshire pheasant with duck fat potatoes and Devonshire turbot resourcefully braised in oxidised Chablis. Produce can be so fresh it is “cycled in for service that night” says Castle.

Motivated by vinous discovery, Noble Rot’s team traditionally spend much time visiting producers old and new. “I still try to do a harvest each year, including Hambledon for tirage, Burgundy and Penedes – which sparked a love of the dry reds and whites of Catalunya,” says Castle.

Featuring several Hungarian wines, Noble Rot’s second restaurant occurs in the former Gay Hussar, Soho. “We don’t want to take a landmark away from London,” says Castle of the reverential list. It features such dishes as the daily goulash, alongside chef Alex Jackson’s pâte aux herbes and a whole roast chicken with morels and Vin Jaune for two to share.

“There’s always so much to discover about wine that our appreciation is continually evolving,” says Noble Rot’s Dan Keeling. “Witnessing how uncompromising Gianfranco Soldera (the Maestro of Montalcino) is when he makes his Sangioveses, or how steep the Terrasenmosel vineyards of Heymann-Lowenstein are to farm, gives you renewed respect for the lengths top winemakers go to.”

Keeling, who believes most things are “better by candlelight”, and has been garlanded with wine writing awards, was previously MD of Island Records and head of Artists and Repertoire at Parlophone where he signed Coldplay, Bombay Bicycle Club and Lily Allen, while co-founder of both the Noble Rot bar/restaurant and magazine, Mark Andrew worked for a decade at Roberson Wine as head buyer, becoming a Master of Wine in 2017.

Keeling describes the Bloomsbury bar and brasserie’s guests as being as diverse as the wine list, with a thirst for “Burgundy, Loire, Jura, old Claret, Etna, new-wave Spain, Greece, Beaujolais, Brunello di Montalcino, Barolo – our guests are as diverse as our wine list.”

Keeler and Andrew try to keep as many of the producers which they write about in the magazine in stock, “depending on availability”, including: Jean-François Ganevat, Julien Labet, Stephane Tissot, as well as Lalou Bize-Leroy, Soldera and Stella di Campalto.

“Franglaise” dishes by head chef, Paul Weaver and consultant chef, Stephen Harris of Whitstable’s The Sportsman, perhaps preceded by a postmodern glass of Retsina or Gaston Chiquet Black Velvet, may include grilled Scottish langoustine with seaweed butter, roast blackface lamb with puy lentils and green sauce, and stem ginger parfait with poached rhubarb oats. “I also loved Gerwuztraminer with Munster cheese – two things I’m not overly fond on their own – with Catherine Fuller at Domaine Weinbach, Alsace,” notes Keeler, who also enjoyed plundering the selection on offer at La Dive Bouteille in Saumur. “Thousands of wine lovers in a vast network of subterranean tuffeau caves, tasting and talking with some of the world’s most exciting organic/ biodynamic/ natural vignerons…”

‘The list at Noble Rot has always been a collection of wines and producers that we love to drink, rather than an exercise in ticking boxes or covering bases,’ says Mark Andrew, co-founder, with Dan Keeling of the characterful Bloomsbury wine bar, restaurant and also magazine of the same title. ‘As a result there are always lots of Burgundies and other French, as well as exciting artisanal wines from up and coming regions. The list changes all the time as we pick up parcels of mature wines often in very small quantities, never to be seen again…’

Keeling, garlanded with wine writing awards from Louis Roederer and Fortnum & Mason, was previously MD of Island Records and head of Artists and Repertoire at Parlophone where he signed Coldplay, Bombay Bicycle Club and Lily Allen, while Andrew worked for a decade at Roberson Wine as head buyer, becoming a Master of Wine in 2017.

The list shows the same humour as the magazine, with engaging introductions. ‘ls anything less than amazing after a glass or two of good Champagne?’ is a fair question posed, while another paragraph reads, ‘Many people claim they “don’t like Chardonnay”, but at Noble Rot we think that’s a bit like saying you don’t like chicken based on KFC, or disliking all music because of Robbie Williams.’ Another is, ‘Noble Rot might never have existed had it not been for our love for the Languedoc’s two finest cult domaines: Grange Des Peres and Peyre Rose.’ And of course, ‘With a name like Noble Rot, the wine list would be incomplete without a selection of top dessert wines…’

‘Franglaise’ dishes by head chef, Paul Weaver and consultant chef, Stephen Harris of The Sportsman, perhaps preceded by a Czech Sekt or Gaston Chiquet Black Velvet may include duck and guinea fowl hearts, followed by grilled Tamworth pork chop, with white beans and bramley apple sauce, or braised Cornish turbot with bisque of fennel and langoustine, then pistachio cake with mascarpone.

Expect a tangibly tasty bar-and-restaurant menu, where Colchester rock oysters (we found a pearl in ours) might be offered alongside perky gazpacho with smoked eel and chervil, and bigger dishes such as Landes guinea fowl with bright vin jaune sauce and game in season.

More than 25 wines are served by the glass, most of which hail from the Old World, including a Tenerife blend supplemented by intriguing, wine-slaked cocktails, such as the Noble Rotter (Chateau d’Yquem Sauternes 2, lime, mint and ice). The list is divided by region and sentiment, such as Pinot Noir / The Heartbreak Grape, and Cabernet Sauvignon, Cabernet Franc, Merlot & friends Bordeaux / So un-cool it’s cool.As well as hallowed French regions, Spain gets a good look-in, including older bottles such as Perez Pascuas, Vina Pedrosa (Ribera del Duero) from 1990.