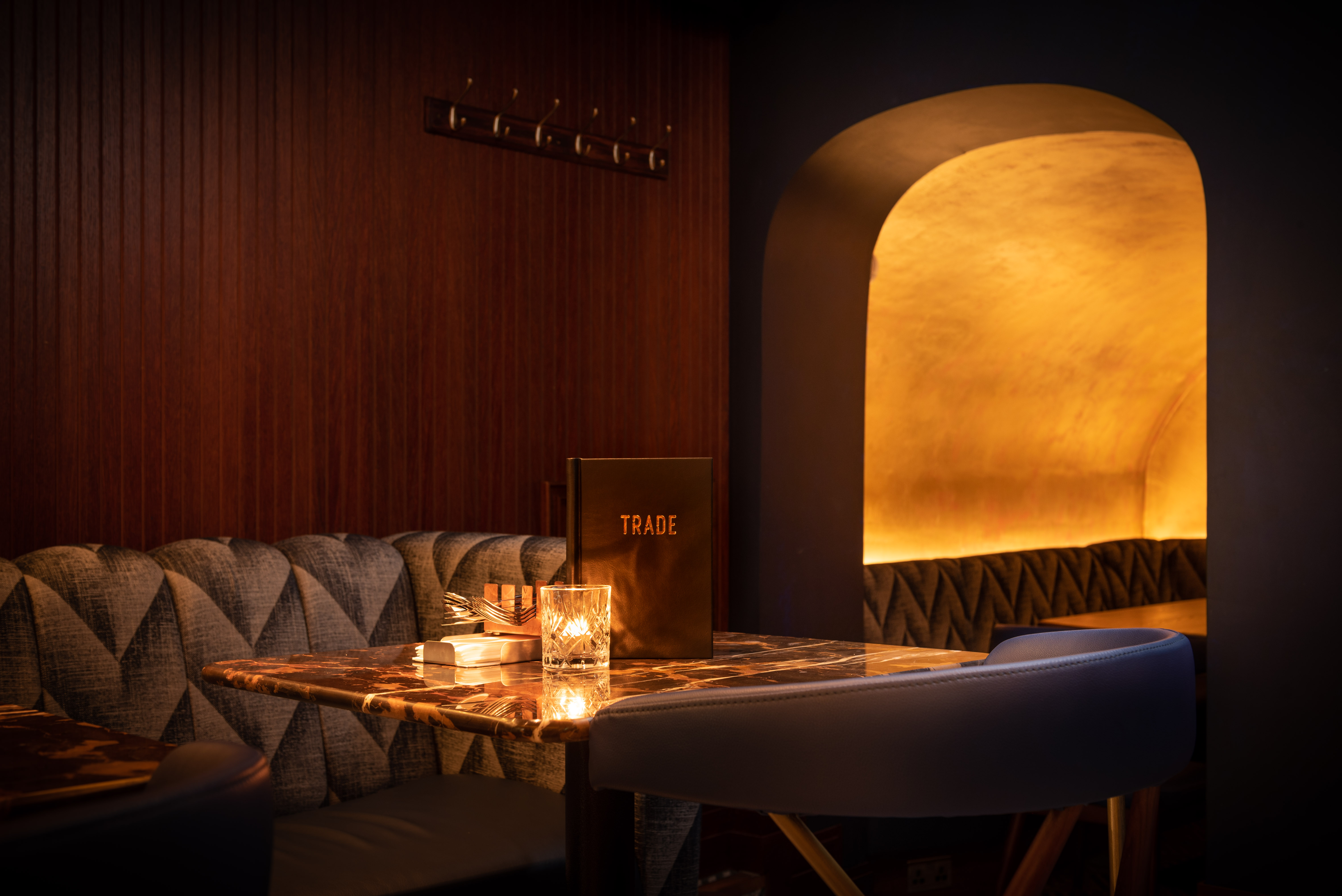 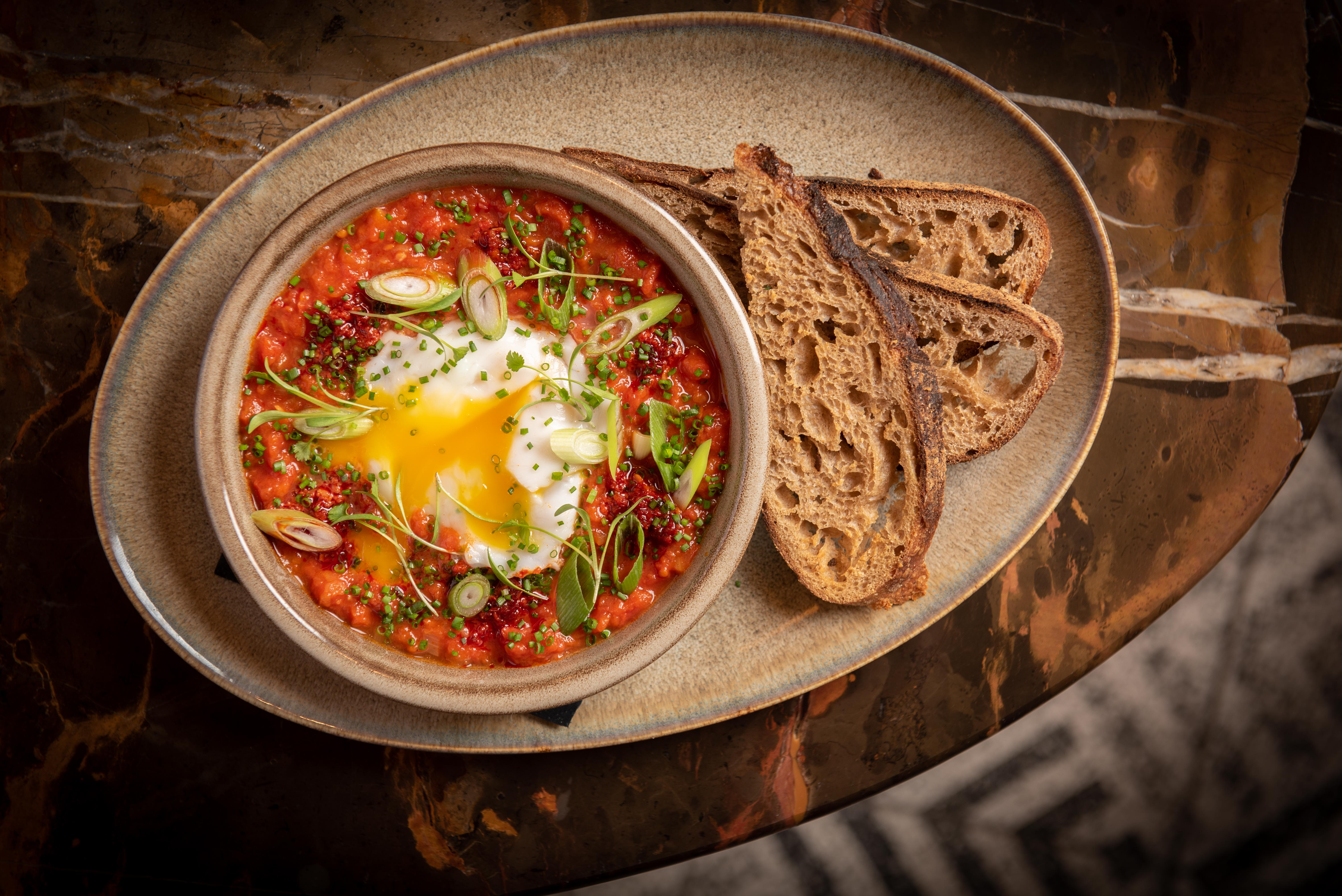 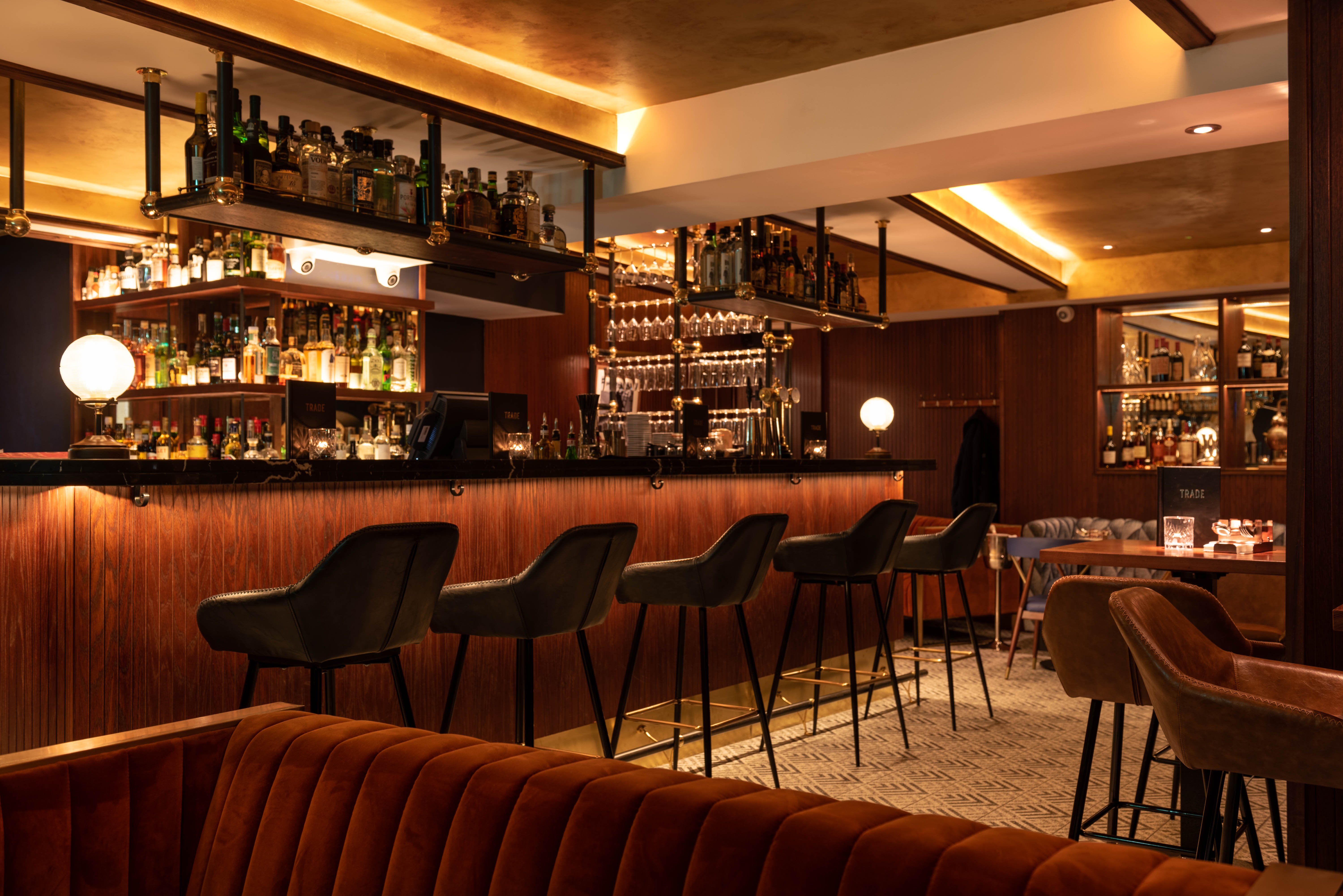 With “no rules, no borders and no restrictions” The Black Book takes its name from the hand-written ledger featuring “one-off, unique gems.”

Originally conceived as the members’ club, “TRADE” for people working in hospitality, “who are often hedonistic, but not very rich” according to co-founder, Xavier Rousset, the furtively-located venue neighbouring Bar Italia has morphed into a more inclusive concept which sees its doors opened to the public. Beyond a mint green facade, it is named “The Black Book” in honour not of the sitcom starring Bill Bailey and Tamsin Greig, but the hand-written ledger of fine and rare bottle personally selected by Rousset and fellow Master Sommelier, Gearoid Devaney.

The former gay club continues to physically host masterclasses, tastings and events beneath its gold ceiling, including Eric Rodez Champagne, Chartreuse, and an investigation into the colourful and ever-expanding no/low alcohol category. However, this is now supplemented by a lively virtual version of the original Club allowing, “access an ecosystem of resources, perks and tools to equip them in a post-lockdown world.” The latter may include, “post-lockdown support” such as “access to resources and support to help your business and staff, including licensing and employment lawyers, advice lines, links to hospitality-specific social distancing guidelines and more.”

Rousset, who is powered by five espressos per day, loves the excitement created by the eagerly thumbed little black book, which might feature 15-year-old Côte-Rôtie (Domaine Pierre Gaillard), 20-year-old Pomerol (Château Hosanna), 25-year-old Ornellaia, and young Domain Trevallon, served in spotless glassware. In collaboration with Coravin, the previously slightly forbidding private room has been tightly reimagined as a “cave au vin”, being home to a minimum of 300 fine bottles. The core list, meanwhile, features Charles Heidsieck and Gusbourne by the glass, as well as older San Leonardo, an Arbois (Capitale Rouge, Domaine de la Pinte) and a “Mystery Red” which, if deduced correctly, results in “a bottle on us” says Rousset.

Dishes by Marco De Frutos, who also oversees Blandford Comptoir, include starter of seabream ceviche with pickled cucumber and pineapple, main of lamb noisette with sweetbread, star anise and carrot purée, and tarte Tatin to finish, while the late-night menu (served until 1am) includes steak tartare, Maldon oysters and polenta chips with truffle mayonnaise.

Look out for special menus, such as the one night with Masterchef, Sven-Hanson Britt of Oxeye, and the tasting menu rendered in collaborations with Anglo’s Mark Jarvis, with whom Rousset took over The Gunmakers pub and steakhouse in Marylebone.

Alongside the specialist wine and spirit offering, the bar continues to turn out innovative cocktails where dancing on the tables is apparently still very much encouraged…

A classy refuge, day and night, for an initial 800 members of the hospitality trade, who are typically “hedonistic, but not very rich,” says Xavier Rousset, co-founder with Gearoid Devaney of this bijou Frith Street members club, as well as Blandford Comptoir, Comptoir Cafe & Wine and Cabotte.

Accessed via entryphone, the nondescript matt grey frontage beside the vivid Bar Italia gives way to a potentially decadent chamber with a brushed gold ceiling (adding an extra £6,000 to the build!), framed historic menus, and well-equipped handsome bar (thanks to Speciality Drinks’ Dawn Davies MW) and authored coffee counter. The best seats are the sofas in the alcoves. GM (and keen golfer, “weather permitting”) Michael Burke (formerly of Craft and Soho House) is the urbane mine host.

Wholly repaired and refitted, the former gay members club required much TLC to remedy water ingress, and is proving a learning curve for Master Sommeliers, Rousset and Devaney. “We’ve never done a members club before and are noticing things like Monday’s busier than Saturday.” Keep an eye out for special events, such as Bloodshot, an after-hours feast by chefs for chefs created by The Dairy’s Robin Gill, who worked alongside Rousset and Devaney at Le Manoir Aux Quat’Saisons.

Rousset, who is powered by five espresso per day, says the “quirky” core list of 40 whites and 40 reds including Slovenian Malvazija, and brand new Bordeaux, “Clavis Oréa” features “hardly any classics.” There’s real excitement via the eagerly thumbed little black book, which might feature 15-year-old Côte-Rôtie (Domaine Pierre Gaillard), 20-year-old Pomerol (Château Hosanna), 25-year-old Ornellaia, and young Domain Trevallon, served in fine glassware. The sweet spot is £50-100 per bottle, at which point “the wines fly out.”

Dishes by head chef, Tony Monzó (formerly of ETM, Aubaine, and Club Gascon) are not fixed to one cuisine and may include: miso braised mushrooms on toast with raw yolk, slow-cooked, crispy suckling pig (72 hours noticed required) and crêpes Suzette.