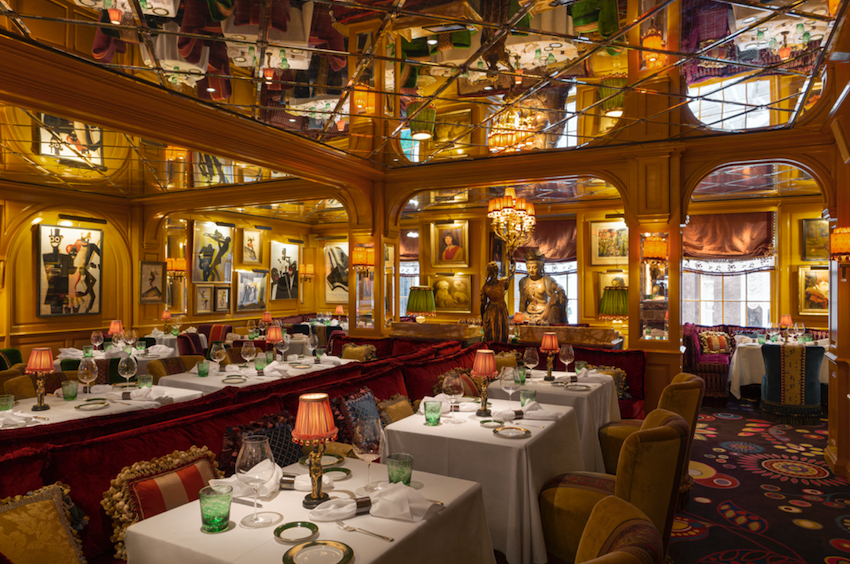 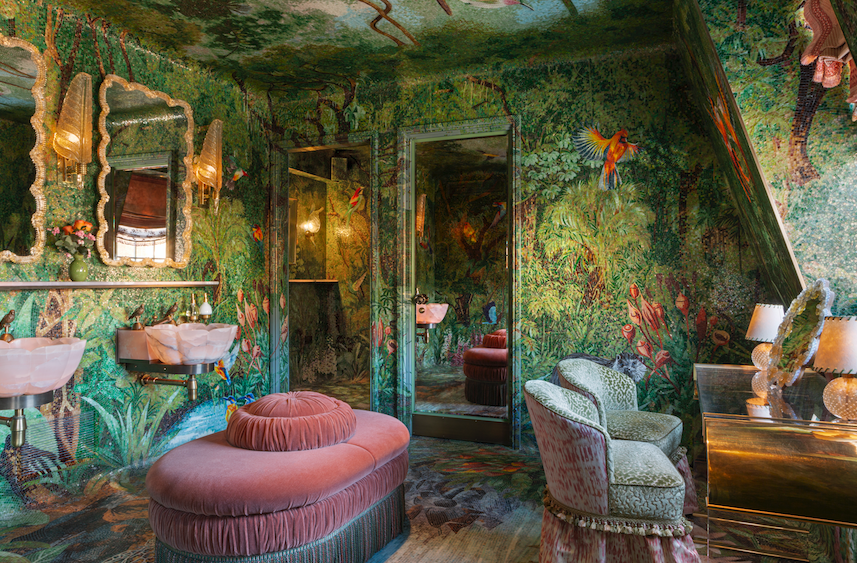 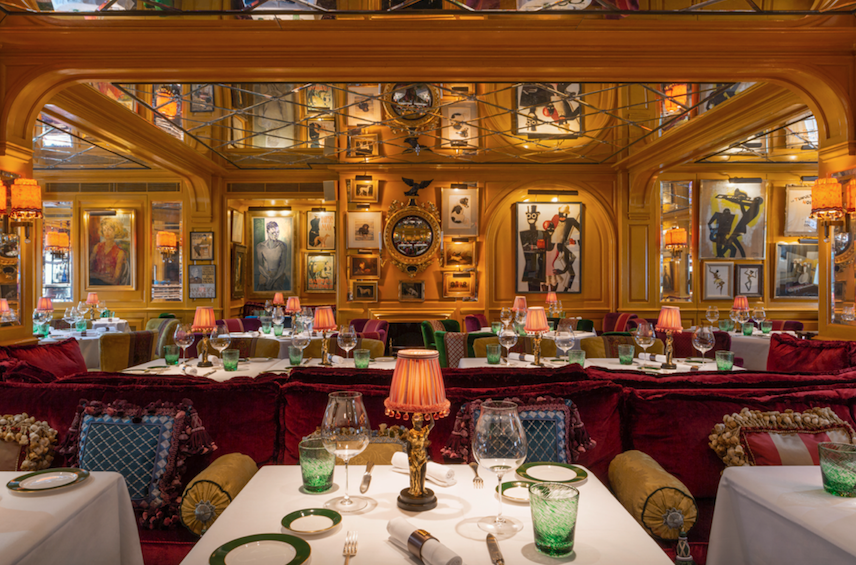 “I try to spend as much time as possible in the Langhe hills,” says Master Sommelier, Clement Robert, who has built the largest collection of Barolo in the world at Matteo’s, a new restaurant in members’ club Annabel’s.

It’s been so wonderful to reopen the doors of the clubs, and the magic of Annabel’s feels more prevalent than ever,” says Robert, head of wine and spirits for Birley Clubs.

Evoking the après-ski atmosphere of the original Annabel’s, Matteo’s is a 60-seat Italian restaurant with a £1 million cellar, subject to tender mark-ups. Overlooking the lush garden of the club, with its mechanically parting glass roof, the gold-tinted dining room features the golden Buddha, lavish mirror and personal art from the first club at No. 44 Berkeley Square. It takes the name of the operator, Richard Caring’s youngest son, whose portrait appears between those of Michelangelo and Marco Polo on the opening page of a wine list that includes likely the largest collection of Barolo in the world. Amassed by Robert and sommelier Erik Simonics (ex The Club – Ten Trinity Square), the regionally classified list stars many vintages of Conterno, Gaja, Scavino and Voerzio. Newly appointed is head sommelier Milena De Waele (formerly of Texture).

Expect also an incredibly detailed range of editions from Tuscan luminary estates such as Guado al Tasso, Ornellaia, Massetto, Solaia and, to 1968 and including imperials, Sassicaia. “We sell six bottles of Sassicaia a day, which created an issue because we couldn’t find enough on the market, although when Priscilla Incisa della Rocchetta visited us, she was so impressed that we can now get it direct,” notes Robert.

As well as Italian sparklers, including Annamaria Clementi (Ca’ del Bosco) and 1989 Ferrari in magnum, Matteo’s boasts bold reserves of Dom Pérignon dating to 1959, including rose-gold Methuselahs. “I’ve true admiration for the brand, which screams Annabel’s,” says Robert. Incidentally, consumption of Champagne has been above average at Annabel’s since the lockdown, “because a lot of our members have gone out to celebrate”.

Matteo’s host, Cristiano Pellizzari, a familiar face for 15 years at No. 44, is in command of the restaurant floor, overseeing a troupe of sommeliers in jackets emblazoned with the Italian flag. Be sure to ask him to whisk the invigorating vodka, Prosecco and lemon sorbet Sgroppino cocktail at the table at the end of a meal.

Incidentally, Matteo’s bathrooms, which warranted their own launch party, are the only places within the club to permit photography, and, in the gents, feature a 500kg onyx crocodile basin.

Elsewhere in the club, Robert oversees a massively endowed list of noble names, from Screaming Eagle to magnums of Montrose and Margaux, double magnums of Latour and Unico, imperials of Haut-Brion and Lafite, and magnums of Boërl & Kroff Champagne and Domaine Leflaive, as well as a collection of Romanée-Conti and Pétrus. Not all is ivory tower, however, with respectable bottles beginning at £29 for a handpicked Slovenian Pinot Bianco (Goriška Brda). As well as wine, there is a strong spirits focus, including 600 bottles of Tequila to say salud with at the top-floor Mexican restaurant.

Throughout the lavish, meticulously realised, four-storey townhouse-turned-wonderland for well-heeled oenophiles, Robert strived to build a knowledgeable, able sommelier team to advise members at the highest level. “I always had an idea that it would become a wine destination, and we’ve finally achieved what we wanted to do – to see regulars drinking exceptional wines at exceptionally fair prices.”

Expect the wine programme to allow guests to take in trips to otherwise closed-to-the-public cellar doors, as well as evenings in-house that will be both educational and ultra-fancy. When not working, Robert and his fellow Master Sommelier wife, Kathrine Larsen, whom Robert says will “smash it” of her ascent to becoming a Master of Wine, enjoys exploring the London dining scene, including the “amazing” Davies and Brook and the “exceptional” Lyle’s.

“I always had an idea it would become a wine destination,” says Master Sommelier, Clement Robert of the relocated and remastered Annabel’s. The extraordinarily lavish four-storey townhouse turned wonderland for well-heeled oenophiles is located on Berkeley Square, beneath which, legend has it, the wine reserves for the Caprice collection (running to at least 18,000 bottles) used to slumber. “Initially, we focused on the bars,” says Roberts (and in testament to those words, there are at least 600 bottles of tequila in the top floor Mexican restaurant alone), “and now we’ll be wine-forward.”

Robert oversees a massively endowed list of noble names, from Screaming Eagle to magnums of Montrose and Margaux, double magnums of Latour and Unico, Jeroboams of Dom Pérignon, Imperials of Haut-Brion and Lafite, and a “collection” of Romanée-Conti. Not all is ivory tower, however, with respectable bottle beginning at less than £30 for handpicked Slovenian Pinot Bianco, for example (Quercus, Vinska Klet).

In addition, beyond a bright green cover, The Wine Buff’s Wine List was launched by Robert within weeks of his tenure (post 28:50) as head of wine at Caprice Holdings and Birley Clubs. Implemented by Annabel’s head sommelier, Erik Simonics (ex of The Club at 10 Trinity Square), this stars at least five Champagnes, ten whites and twenty reds at a mouth-wateringly low margin – “sometimes as low as 5%” confirms Robert, albeit all is subject to a 15% service charge and conditional of a covetable membership to the club. Labels on this list are properly premier league and move more often than football transfers, and may include Salon Le Mesnil, Domaine Leflaive, Conterno Monfortino Barolo, Pétrus, Penfolds Grange and Chave Hermitage.

Quarterly wine dinners in the garden, complete with retractable roof, are an extravagant affair and have featured Mouton versus Lafite alongside wagyu cheek and truffled potato, and d’Yquem and Cheval Blanc served with thoroughly truffled beef Wellington..

NB: Review refers to Annabel’s and not to Matteo’s specifically. Matteo’s opened at the end of 2019.