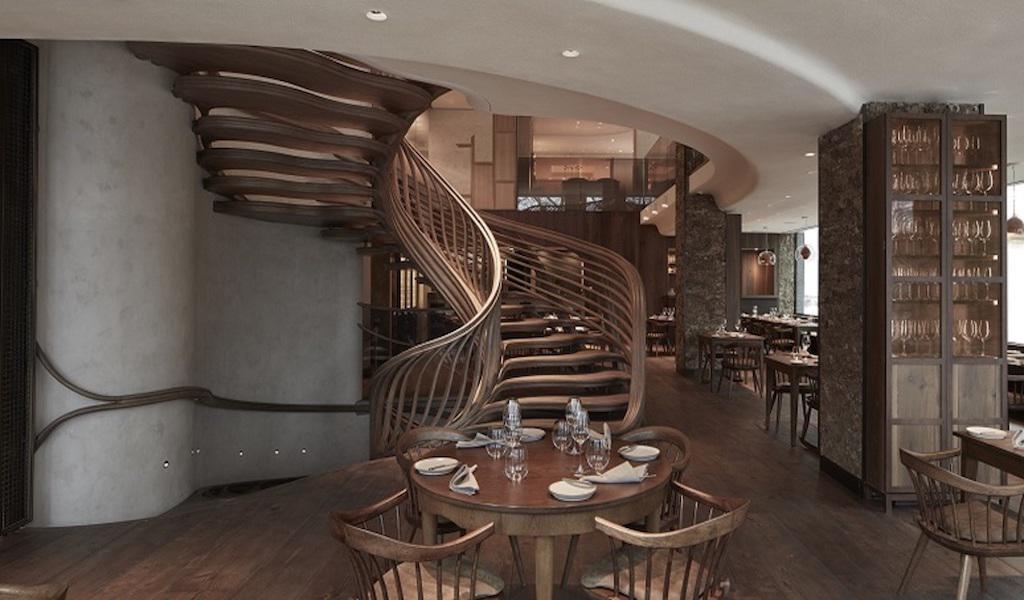 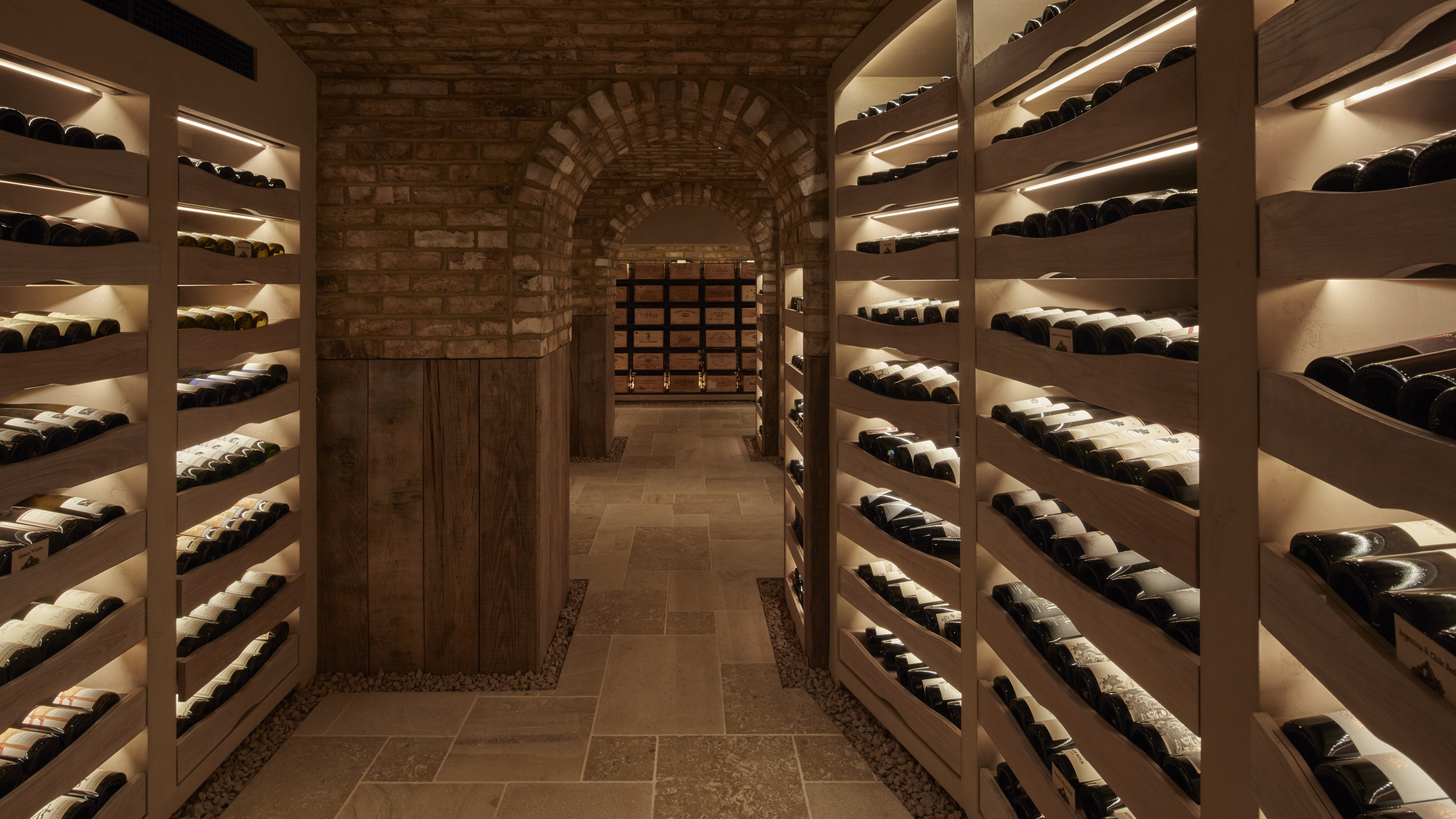 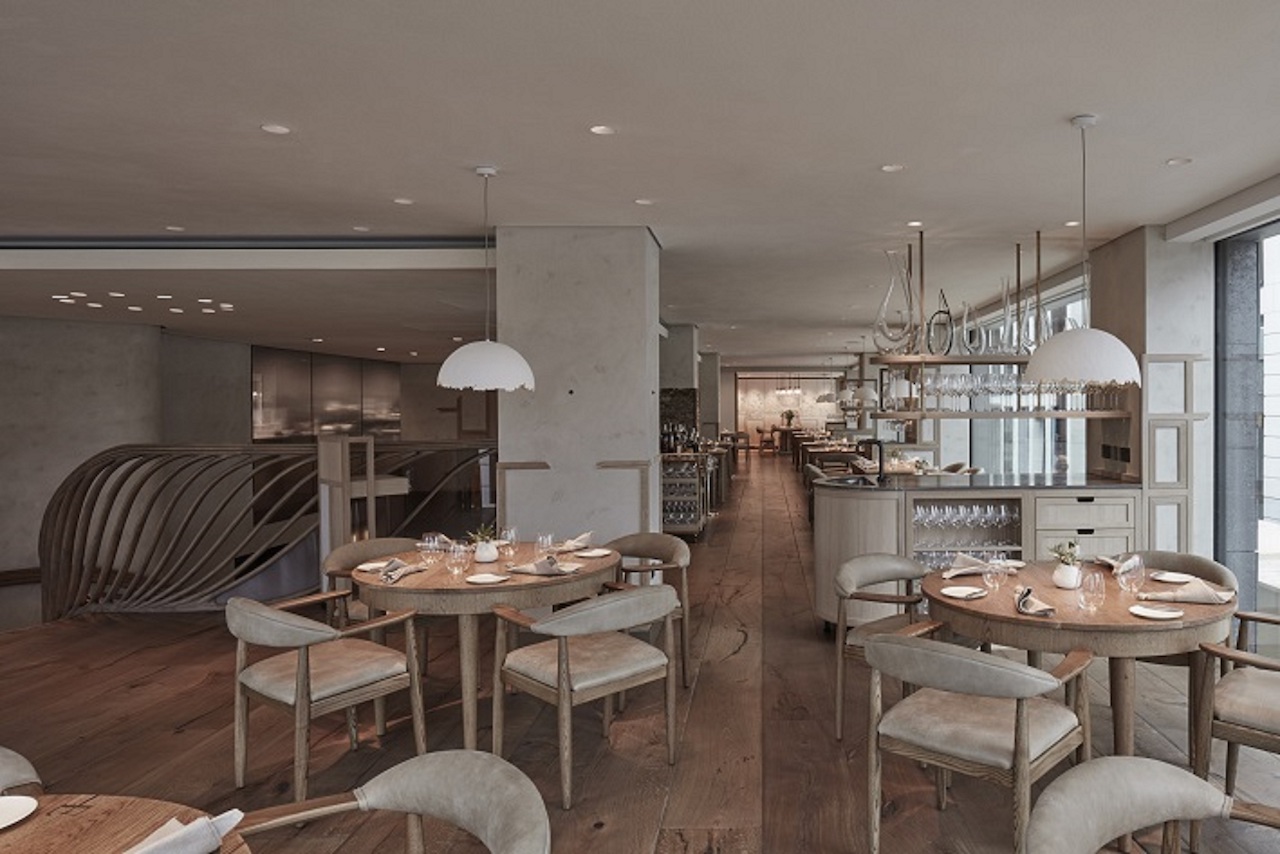 Former Best Sommelier of Ukraine, Dmytro Goncharuk keeps track of a massive, impeccably sourced wine selection at this three-floor temple to the grape, brought to you by Hedonism Wines and chef, Ollie Dabbous.

“With such a large wine list it’s very easy to encourage guests to try something new at Hide,” says head sommelier, Dmytro Goncharuk, who was once crowned Ukraine’s best sommelier. “Every time I mention that our cellar comprises 800 wines – with 6,000 more available within 15 minutes or fewer from Hedonism Wines – my guests ask to taste something from a lesser-known region or producer, such as Weingut Wolmuth from the beautiful Sudsteiermark in Austria, which I recently visited.”

Accessed via leather-wrapped tablets, the list of head sommelier, Dmytro Goncharuk opens with the words, “a corkscrew, a glass, a memory…” Formerly Fakhreldine (a restaurant named after a Lebanese prince) 85 Piccadilly was totally re-oriented as a wine lover’s Mecca connected by an Instagram-friendly curvaceous staircase. With cork-wrapped pillars and vine leaf plasterwork, both restaurants, Ground and Above, and the inventive cocktail bar, Below, are a collaboration between Evgeny Chichvarkin and Tatiana Fokina, the brains behind nearby wine megastore, Hedonism Wines, celebrated chef, Ollie Dabbous (a protégé of Raymond Blanc OBE), and mixologist, Oskar Kinberg.

The list is constantly changing, says Goncharuk, “updating in real time according to the stock on hand in Hedonism.” He is particularly proud of the selection of big bottles, running to over 160 bins, “from magnums to Methuselahs.”

On the mezzanine is the Michelin-inclined Above with a manicured cheese cart and views across to the kitchen and Greem Park, as well as the brightest of the four private rooms, Hide and Seek, served by its own lift. A further three private dining rooms, The Broken Room, The Shadow Room and The Reading Room, occupy alcoves beneath the Mayfair pavement and are distinctively decorated, including a banquette mounted on books.

Alongside the tasting menu at Above are three styles of wine pairings, featuring six accompaniments, from the £95 “Classic”, which might include Californian Old Vines Zinfandel (Turley) or Barolo (Scarzello), to “Iconic” at £250, with the option of Rioja Blanco Reserva (Remirez de Ganuza) or La Richemone Nuits-St-George (Domaine Perrot Minot) with nearly a decade of age. At the top end at £495 is the truly “Hedonistic” option starring such vinous luminaries as Quintarelli Amarone and Château d’Yquem from 1967.

Dishes realised by a brigade including Roux Scholar, Martin Carabott, may include Roast scallops, crushed swede with wood sage honey and spiced saffron buttermilk, then Wagyu beef shavings, Oscietra caviar and rye in a warm oxtail broth, then chocolate and burnt cypress bark to conclude…

Goncharuk thanks his father for inspiring him to make wine a profession. “It all started with his annual winemaking process in our garage: the process of harvesting, pressing and fermentation fascinated me. We used to make two wines: Seibel – a hybrid red grape created in Austria in the nineteenth-century with an intense colour and strong tannins, and aromatic Lidia, a variety found exclusively in Moldova and south-west Ukraine.” Prior to Hide, Goncharuk worked in Kiev’s leading restaurants, followed by positions in Dubai and Azerbaijan.

Hide’s wine list opens with the words, ‘a corkscrew, a glass, a memory…’ Formerly Fakhreldine (a restaurant named after a Lebanese prince) 85 Piccadilly has been re-oriented as a calibrated ‘wine lover’s Mecca connected by spiral staircase’ according to dynamic Wine Director, Piotr Pietras. With cork pillars, vine leaf plasterwork and the occasional bottle-shaped door, both of its restaurants and inventive cocktail bar, are a collaboration between Evgeny Chichvarkin and Tatiana Fokina, minds behind the nearby Hedonism Wines, chef, Ollie Dabbous (a protégé of Raymond Blanc), and mixologist, Oskar Kinberg. According to Dabbous, Chichvarkin was a regular guest at his Fitzrovia restaurant, ‘even doing a day in the kitchen.’

Pietras’ cellar, fronted by bow window cabinets stocked with Imperials, is no mere wine equivalent of a car park. Indeed, rarities such as 1889 Château d’Yquem, recorked 100 years on, halves of hallowed Hermitage La Chapelle 1961 (other formats from 1937 are also available), Pétrus 1949, and near cassis in colour, Sine Qua Non rosé rest upon baize lined, sliding shelves. ‘The project is about back vintages and direct relationships with growers,’ says Pietras. However, with over 100 wines under £50, and wines by the glass (totalling 65) beginning at £5, the selection is not undemocratically priced. And, ordered via leather wrapped tablets, guests have access to the wider portal of Hedonism’s 6,000 plus lines, meaning bottles may be couriered to table within 15 minutes or fewer of ordering, ‘and sometimes half that time,’ Pietras reports. Standard-sized formats of still wine attract a reasonable £30 corkage when chosen in this way.

Of the meticulous cellar, Pietras hopes to accrue a slightly more lived-in look over time, ‘making it a sommelier’s cellar rather than a designer’s cellar.’

Pietras and his 16 strong sommelier team, named on the wine list’s credit roll, and drawn from, among other countries, Australia, Dubai, Germany and Sweden, are divided between street level ‘Ground’ restaurant, featuring a bakery which is mostly operational at night, and glass fronted wine fridges amply stocked with Champagne reaching back to the 1950s; Bruno Paillard is house pour. ‘We would like to serve Champagnes at 12 degrees Celsius, but customers like it really cold!’ Pietras laments. There are also effervescent bottles from England (including opulent Hambledon), and Pietras has high hopes for German Sekt. ‘Serious Prosecco is available on the digital list from Nino Franco,’ he adds.

Mezzanine is Michelin-inclined ‘Above’ with a seriously well equipped cheese cart and views to the kitchen, as well as the brightest of the four private rooms, accessible by private lift. A further three PDRs occupy alcoves beneath the Mayfair pavement, and are distinctively decorated, including a banquette mounted on books.

Pietras is happy to decant wines such as Harlan and Screaming Eagle up-to 48 hours prior to a guest’s visit, ‘though we will process payment first…’ Just don’t ask him about Coravin, a system he mistrusts to best keep tapped bottles.

Alongside the tasting menu at Above, Pietras has devised three styles of wine pairings, of which ‘Discovery’ option is arguably the most exciting, including phylloxera-free Palo Blanco, Envinate, Valle de la Orotava from Tenerife with roast king crab and camomile honey. Meanwhile, ‘Hedonistic’ (based on ‘Hedonism’) could include 1982 Vieux Château Certan with 1999 Meursault (Arnaud Ente), barbecued Herdwick lamb with 1992 Harlan Estate, and, with coconut, 1937 Sauternes (Château Rayne-Vigneau).

Pietras began his working life as a footballer, ‘playing half-professionally – but I wasn’t injured like Ramsay,’ He subsequently embarked on a hotel management course, working part-time as room service waiter at the Sheraton hotel in cobbled Poznań (a city known for its whisky show) in his native Poland. ‘I remember literally not being able to open a bottle of Dom Pérignon for a customer,’ he recalls. ‘Pretty embarrassing!’ An inherent thirst for knowledge and competitive streak saw him study wine via Google and books. By the time he left Poland in 2013, Pietras had created the country’s largest wine list at the five-star City Park Hotel and Residence. He believes his upbringing in Poland, a country bereft of furrowed prejudices predominating mature wine markets, allowed him to develop, ‘with passion’, an unrestrictedly curious approach.

Not content with being a big fish in a small pond, Pietras ‘knew it was time to move to wine capital, London,’ resulting in a trial shift then instant offer of employment at Corrigan’s, Mayfair, followed by Maze, ‘which was fast paced with high profile customers and a huge wine list.’ That experience taught him to communicate concisely within a team, ‘sometimes without using words.’ After getting married, Pietras joined Launceston Place, which was, he says, ‘a completely different story, allowing me to explain wine pairings to guests for two-to-four minutes rather than seconds…’ Alongside, Pietras made time to achieve the Master Sommelier qualification.

From not being able to open a bottle of Champagne to leading arguably London’s most wine focused restaurant, Pietras’ journey is inspiring.

Harking from Mykolaiv, close to the Black Sea, Dmytro Goncharuk thanks his half-Moldovan father for leading him to wine, fermented in the family garage from “intensely-coloured red hybrid grape Seibel, and aromatic Lidia”.

With fellow head sommelier Julien Sarrasin, Goncharuk “always tries to be both a friend and a boss”, to his 12-strong team at Mayfair’s Hide, working with suppliers to offer incentives, such as the saké-discovery trip to Japan.

Hide’s famous organic looking, handmade staircase winds from the excellent snug haven of spirits and in-alcove private-dining rooms, beside which the cellar is laid out as a street, complete with shop window, to the excellent of acoustics, cork- pillared, cosy Ground restaurant with bakery, then past the deliberately fogged kitchen window to the bright Above restaurant that is replete with vine-leaf plasterwork.

The ever-changing list at Hide comprises circa 1,000 wines, 170 of which are large-format, “from magnums to Methuselahs”. This is amply supplemented by 6,000 more lines approved by the buyer, Alistair Viner, and available to diners within 15 minutes or less by electric bike or BMW from Hedonism Wines. These include 1,200 large bottles. Both Hide and Hedonism are brought to you by the enigmatic Evgeny Chichvarkin and Tatiana Fokina. The pedigree of the bottles, which can be extremely fine and rare, is of prime importance.

Such a volume of wine means it is, “very easy to encourage guests to try something new at Hide,” says Goncharuk, who recently demonstrated his own vinous curiosity by visiting the volcanic soils of Lanzarote into which bush vines of Malvasia and Muscat peep from rock-enclosed dips.

The kitchen is led by a protégé of Raymond Blanc OBE, Ollie Dabbous. The eight-course tasting menu at Above is accompanied by three grades of wine pairings, costing £105 for Classic, possibly including a Riesling Spätlese from J.J. Prüm, £280 for Iconic, perhaps including Yukimuro Chozo Junmai Ginjo Genshu saké, and the breathless £545 for Hedonistic, which could include white Ornellaia and Eight Track rosé from Sine Qua Non. Meanwhile, dishes at Below may include stuffed roast chicken with crushed Jerusalem artichokes, black truffle and roasting dishes, partnered with tannic Barolo or juicy Pinot Noir.

Before Hide, Goncharuk worked in Kiev’s leading restaurants, and he is proud to see two Ukranian wines at Hide, “including one from close to my city, Shabo Saperavi”, followed by positions in Dubai and Azerbaijan. Of the future, Goncharuk, who first worked under Piotr Pietras when Hide opened, will continue to nurture the wine programme, while having a little time for other escapades, given he has, for now, finished formal study. Hence, the keen sailor hopes to “sail to France and Belgium”. He also dreams of visiting Chinese producer Ao Yun in Shangri-La.