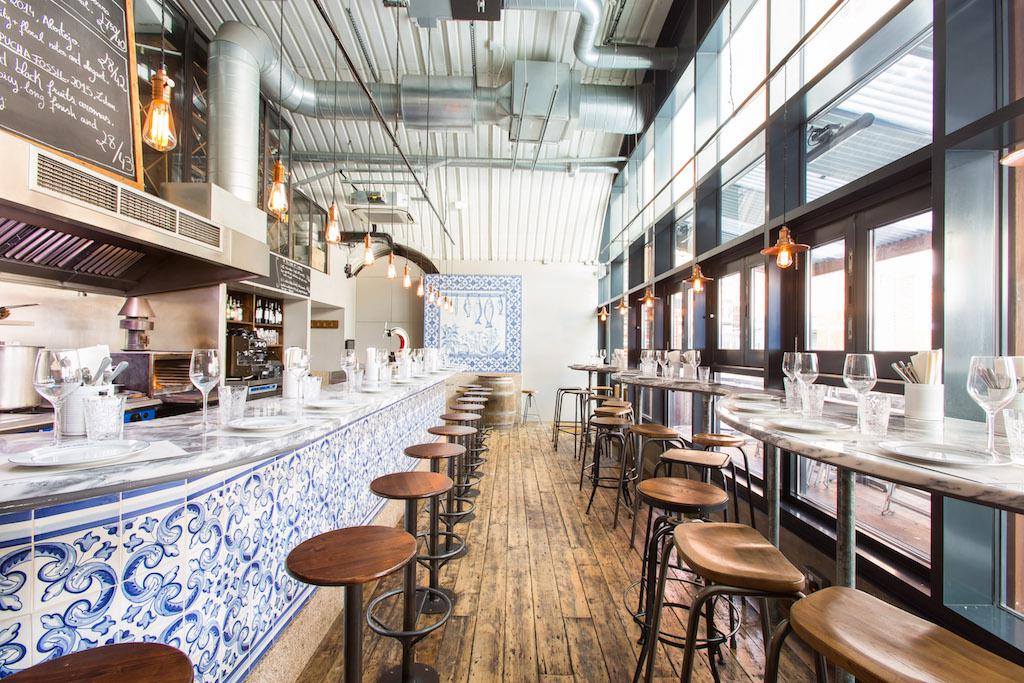 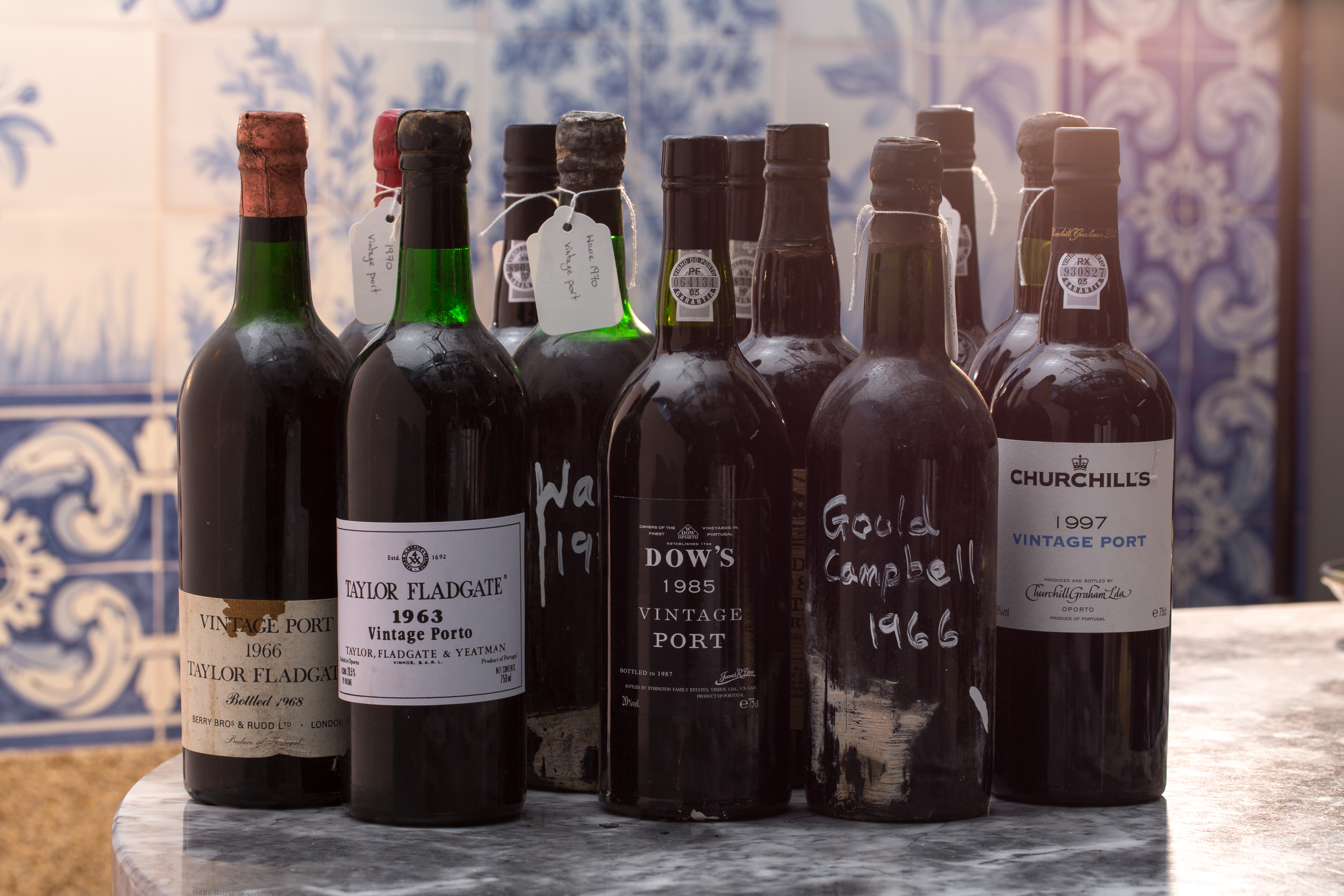 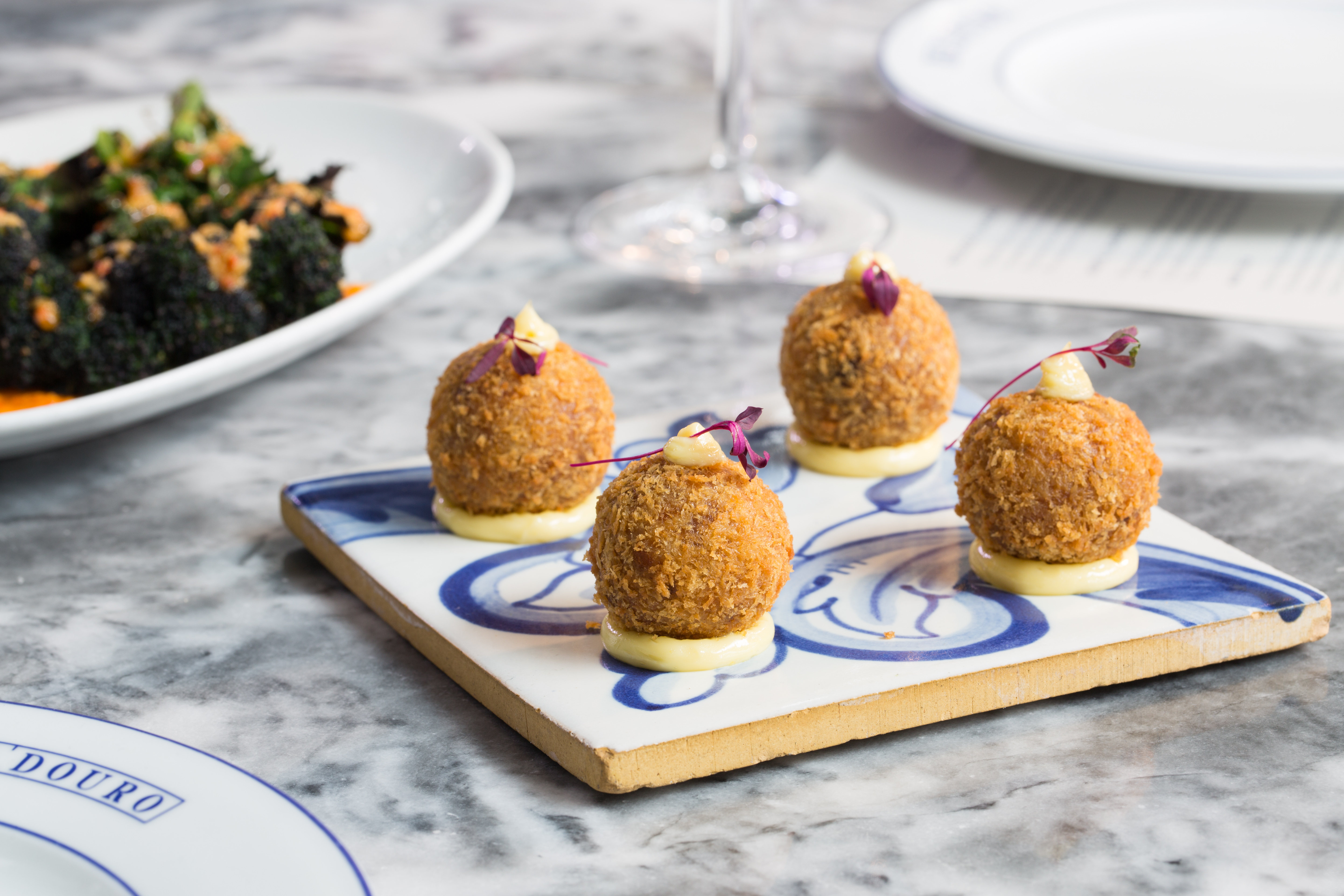 Emerging from a railway arch, Bar Douro is a gastronomic festival of Portugal created by Max Graham of the famous Port dynasty.

With authentic Portuguese tiles and marble counters for 30 at which you can easily while away the afternoon, Bar Douro wine bar and mezzanine cellar adorn one of seven railway arches at Flat Iron Square near Borough Market.

It is run by artist and restaurateur, Max Graham whose father Johnnie founded Churchill’s Port in 1981, being the first new Port house to emerge in half a century. Port, of course, features on the exclusively Portuguese list with Churchill’s emblematic 10-year-old dry white version “pairing perfectly” with the toasted almond tart, Graham recommends.

The Cellar List features a map highlighting regional flavour profiles which helpfully illustrates the diversity of what the country has to offer. “Portugal has over 250 native grape varieties and such varied terroir from the Minho in the North to the Alentejo in the South, to the Açores and Madeira in the middle of the Atlantic,” notes Graham.

Instagram-ready, flavoursome dishes are by Sean Marsh, “an honorary member of our Portuguese family,” says Graham, whose love of Portuguese cuisine “began with a pop-up in the Algarve, quickly escalating to a position at two Michelin-starred Vila Joya, followed by two years at St. John.” These may include croquettes filled, near to bursting, with smoky sausage, char-grilled sardines with blistered peppers and shaved fennel, and, with a little notice, whole suckling pig. “With heritage tomatoes from the Isle of Wight with white Port vinaigrette, I am also a huge fan of a slightly chilled glass of Tiago Sampaio’s Uivo Renegado which sits somewhere between rosé and a light red.”

At the start of 2020, Graham opened the sequel venue, Bar Douro City at Broadgate Circle. “While it was very upsetting to have to close our doors, we were forced to adapt, launching an online bottle shop, followed by Bar Douro’s Wine Club.” This provides members access to a Discovery Box chosen by “wine detective”, Sarah Ahmed, “featuring wines which we are introducing to the UK for the first time,” says Graham.

While Graham had to reduce his selection of wines by the glass at Bar Douro, “to better manage wastage being open only five days a week,” this has in no way made the offering less exciting, he insists. “We continue to rotate our wines by the glass with new discoveries imported from small independent producers such as Herdade do Rocim’s Fresh from Amphora, naturally vinified in Talha clay pots. Because it’s such an easy-drinking, quaffable wine, it’s served in a one-litre bottle.”

With fetching Portuguese tiles and long, tall, slaking marble counters at which you can easily while away an afternoon, Bar Douro wine bar and mezzanine cellar adorns one of seven railway arches in Flat Iron Square, near Borough Market.

It is run by artist and restaurateur, Max Graham whose father Johnnie founded Churchill’s Port in 1981, being the first new Port house to emerge in half a century. Port, of course, features at Bar Douro, with Churchill’s Reserve,14 LBV, 10-Year-Old and vintage ‘97 all available by the glass, while the white slaked with tonic becomes especially alluring on a summer’s day.

The rest of the list, illustrated with a map highlighting regional flavour profiles, is exclusively Portuguese. “We endeavour to show the very best the country has to offer, from less accessible reserves through to natural wines and more experimental projects at the vanguard of Portugal’s wine scene,” says Graham, who regularly undertakes reconnaissance in Portugal. “I recently tried Mateus Nicolau de Almeidas Curral Teles at Euskalduna Studio, a favourite restaurant of mine in Porto. Bar Douro now imports it and it’s our latest edition to the Cellar List. Light, fresh and full of those ‘Esteva’ (gum-cistus) resiny notes that are characteristic of The Douro. This is a younger generations approach to this historic terroir delivering light and elegant wines, less extracted and with a minimal intervention approach…”

Colourful, generously flavoursome dishes are by Sean Marsh, “an honorary member of our Portuguese family,” says Graham, whose love of Portuguese cuisine “began with a pop-up in the Algarve, quickly escalating to a position at two Michelin-starred Vila Joya, followed by two years at St. John.” These may include croquettes near to bursting point with smoked Portuguese sausage, a salt cod hash, char-grilled sardines with blistered peppers and shaved fennel, and, with a little notice, whole suckling pig, followed by toucinho do céu (yolk almond cake egg yolk almond cake). “New on the menu, our Crab Rissole pairs beautifully with Marcio Lopes’ Alvarinho,” says Graham.

Bar Douro recently launched a Guest Chef series, “hosting some of our favourite chefs from Portugal, who create a menu in which we add a wine pairing.” Participants include Antonio Galapito from Lisbon’s Prado, whose pudding of pear, honey ice cream and oats meets Churchill’s Dry White Port.

Max Graham, scion to Churchill’s Port dynasty, launched an eight month pop-up wine bar in Soho prior to opening Bar Douro, ‘which made me aware of how under-represented Portugal was in London in terms of food and drinks, and that was the inspiration for Bar Douro.’ With Azulejo tiles from Ceramica Bicesse, and granite and marble from Aveiro, the bijou, authored Bar Douro opened in Flat Iron Square in November 2016.

Graham’s family has long been connected to the Douro valley, making wine there for nearly two centuries. ‘The North of Portugal has always been a source of inspiration. Having trained as an artist, I spent many summers with an easel in the Ribeira, drawing people and watching the fishermen and local life,’ he recalls.

Port, of course, plays an important part in the offer at Bar Douro, whether it be in the summery Churchill’s white port and tonic, or more comprehensive collection of vintages, including Fonseca 1963 through to Taylor’s 1966, Warre’s 1970, Dow’s 1985 and Churchill’s 1997. ‘We also serve tasting flights for those wanting to sample the different styles of White, Tawny and Ruby,’ says Graham.

The rest of the list is also exclusively Portuguese. ‘We endeavour to show the very best the country has to offer, from less accessible reserves through to natural wines and more experimental projects at the vanguard of Portugal’s wine scene, encouraging customers to explore our list, which is divided by region.’ Portugal, enthuses Graaham, has a hugely rich tradition of winemaking, with over 250 native grape varieties. ‘The ungrafted Ramisco vines of the Colares region are some of the oldest in Portugal, and reds from this region are among my favourites. We list a Viuva Gomes Reserva 1969. The fact these wines grow on sand dunes within a stone’s throw from the Atlantic explains their high natural acidity and aging potential.’

Graham regularly visits Portugal, recently taking a recce to the Simplesmente Vinhos wine fair, Porto showcasing a new generation of vignerons. ‘It’s exciting to see what is happening in Porto; the rise in tourism is creating possibilities for boutique, independent winemakers and cultivating an environment fit for experimentation, including Mateus Nicolau de Almeida’s Ermitas – a collection of single varietal organic Rabigatos.’

The more established figures also feature. ‘The most important thing is that we like the liquid in the bottle.’ You might encounter Crasto Vinhas Velhas by the glass, and those wanting VIP liquid may purchase a bottle of rested, modestly marked-up Barca Velha.

‘It’s exciting so many of our guests wish to grow their knowledge. Even though prices on imported European wines have risen and may continue to do so post-Brexit, there is a growing interest, particularly among millennials, in lesser-known wine regions and independent producers. Our mission is to raise awareness of Portugal’s diverse wine regions and varieties. We are not dealing with mass volume and I think that by making rare and unusual wines available we will find an audience.’

NB. In terms of corkage, Graham advises, ‘if a customer has a special bottle of Portuguese wine not on our list we offer it at £20 per bottle.’