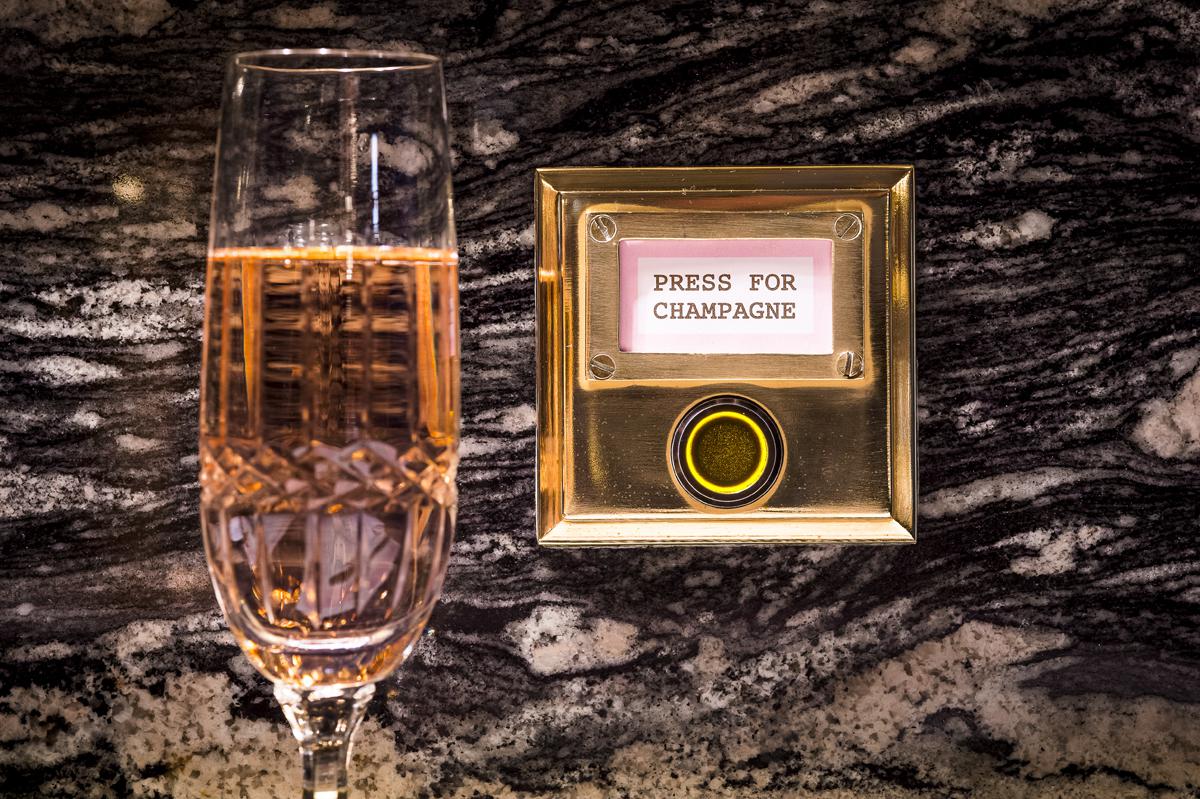 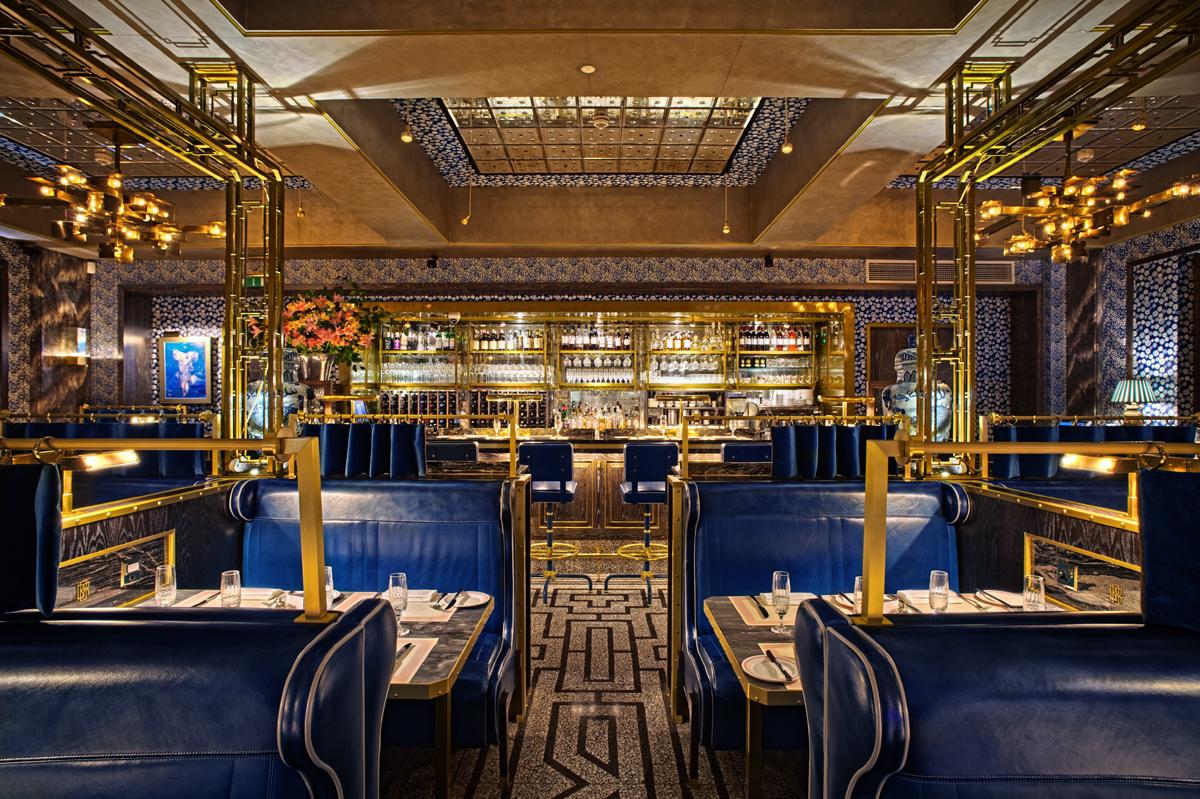 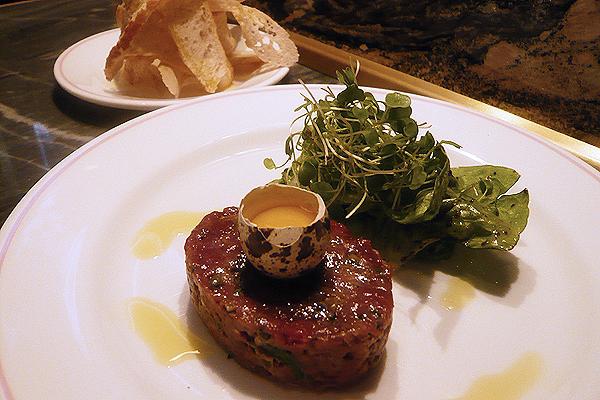 Elaborate, meticulously realised decor
Press for Champagne buttons
An engaging owner in the form of Leonid Shutov
Chateau d’Yquem by the glass

The antithesis of minimalism, Bob Bob Ricard remains one of the capital’s most enjoyable and memorable restaurants, with a well-considered wine list celebrating Champagne.

Maximalist deluxe designer, Bob Bob Ricard was created by Leonid “Bob” Shutov on the site of what had been one of London’s most minimalist restaurants, Circus. Shutov, who mentions his original designer, the late David Collins, fired him for embellishing the original scheme, has relentlessly gilded the lily of the restaurant rigged with “press for Champagne” buttons. These have become so popular that some 120,000 glasses of fizz a year are enjoyed within the all-booth restaurant.

The menu includes a dégustation of three caviars, baked oysters Brezhnev with black truffle, a steak tartare with buckwheat crispbread, a famous turbot Wellington, and to finish, cloudberry pavlova with whipped Guernsey cream or Stinking Bishop cheese soufflé with apple and gooseberry chutney. Come the end of the week, Shutov has devised a “weekend waffle hour” between 11am and noon, featuring truffle waffle with truffle-infused maple syrup.

As well as in accents to the dishes, Russia is present in the shots of “neutral, delicate” Russian Standard vodka, marked on the menu as being served at –18 degrees Celsius, “to allow a four-degree loss when it has reached the table from the freezer,” says Shutov. “Neutral, delicate, with a residual flavour on the back of the tongue – you can barely tell it’s a spirit.”

Having launched with a maximum mark-up of £50, Shutov’s list today features wines from Domaine Faiveley, Leflaive and Palmer, 10-year-old Sassicaia, and at over two decades old Beaucastel.

Shutov, who was previously the CEO of Ogilvy Moscow, also launched Bob Bob Cité in the City across the whole gallery of the “cheesegrater” skyscraper. Showing a “Tokyo nights” vibe is the dot matrix border inside highlights which tables have succumbed to their “Presser pour Champagne” buttons.

Running to three times the footprint of Bob Bob Ricard, but with only 30% more seats and, usefully in times of COVID, barely any doors, every dining room stars a Swiss-made crane to aid steady decanting of big bottles. These include Imperials of Château d’Yquem and priced at a £1 per centilitre and available as a bottle, magnum, Jeroboam and Imperial to suit all wallets, Moët & Chandon. And to finish, rather than opting for a premium, “fox poo coffee”, Shutov “would rather be educating you on Armagnac”, hence the collection of 50 vintages dating to 1888 – yours for £800 a glass.

In Bob Bob Ricard and Bob Bob Cité, the dapper Shutov, who first became interested in first-class alcoholic drinks in Russia, has painstakingly built two game-changing restaurants with considered and consistent cellars. “I am very fortunate to have daily access to some of the best, rarest or most valuable wines and Champagnes in the world,” he says. “The lists have evolved over the years, with the aim being, to balance populism with sophistication. They are designed to be quick and easy to navigate, even for wine novices, but to have enough interest and excitement for connoisseurs.”

Dapper Shutov first became interested in premium alcoholic drinks in Russia. ‘I was mostly interested in vodka, especially emerging malted and vintage versions.’ However, since moving to the UK and conceiving the restaurant, Shutov expanded his wine knowledge considerably. ‘I am very fortunate to have daily access to some of the best, rarest or most valuable wines and Champagnes in the world.’

The wine list has evolved over the years, he says, ‘much of the work and development done by me.’ Shutov’s aim is to balance populism with sophistication. ‘It is designed to be quick and easy to navigate, even for wine novices, but to have enough interest and excitement for connoisseurs.’

Value remains an important consideration. ‘Anyone can offer excitement when money is no object, but we look to delight customers at prices they can afford.’ And in terms of selection, first impressions must be harmonious. ‘If the wine does not show well straight after it’s been opened, then this is not a wine for us.’

The Champagne selection, which shows fair pricing, remains Shutov’s speciality, ‘and it is hardly surprising that it accounts for over 40% of our wine sales,’ he says. ‘Being in the restaurant business creates incredibly memorable moments. I had the privilege to drink Moët from 1914, and 1921, on the same occasion. There was something fantastical about drinking the juice of grapes harvested more than 100 years earlier in occupied Champagne, in the middle of WWI while battles were raging…’

Although the quirky on list comparisons highlighting high mark ups for the same wines at other restaurants no longer feature, Shutov continues to court attention for potentially revolutionary practices, such as the off, mid and peak pricing of the à la carte menu. Perhaps one day this could also continue to the wine list to help tempt those doing dry January into a more life enhancing beverage than mere water…?