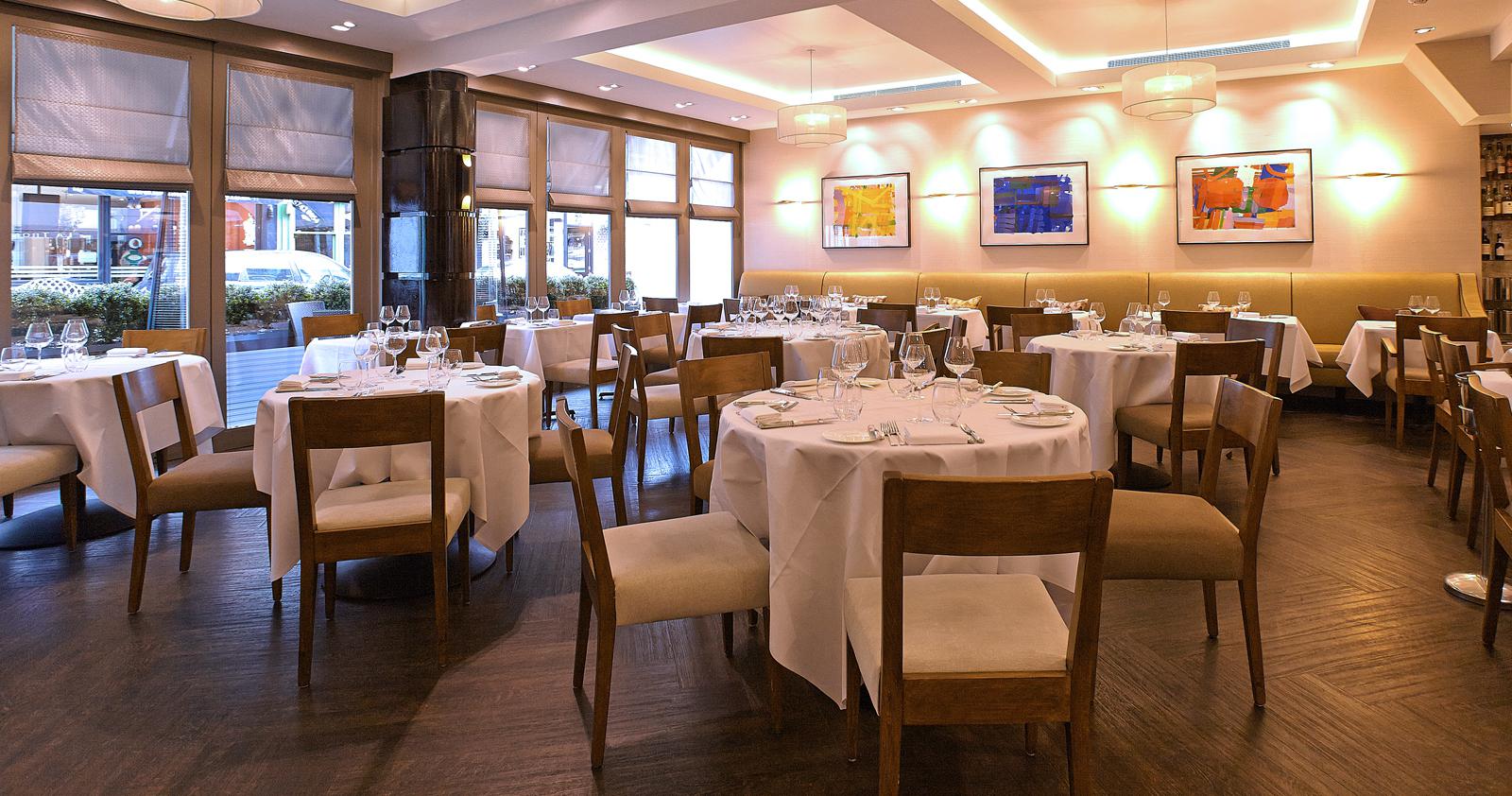 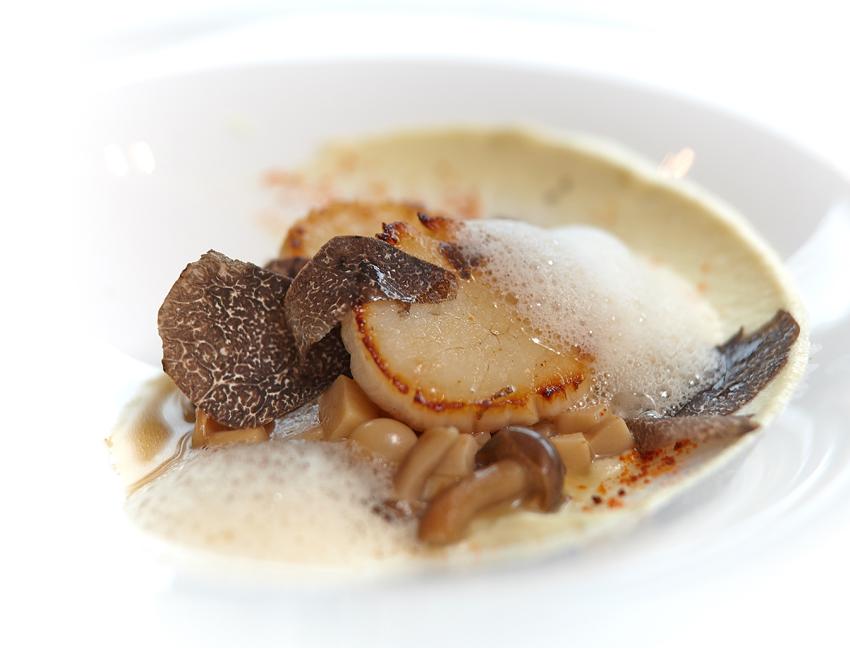 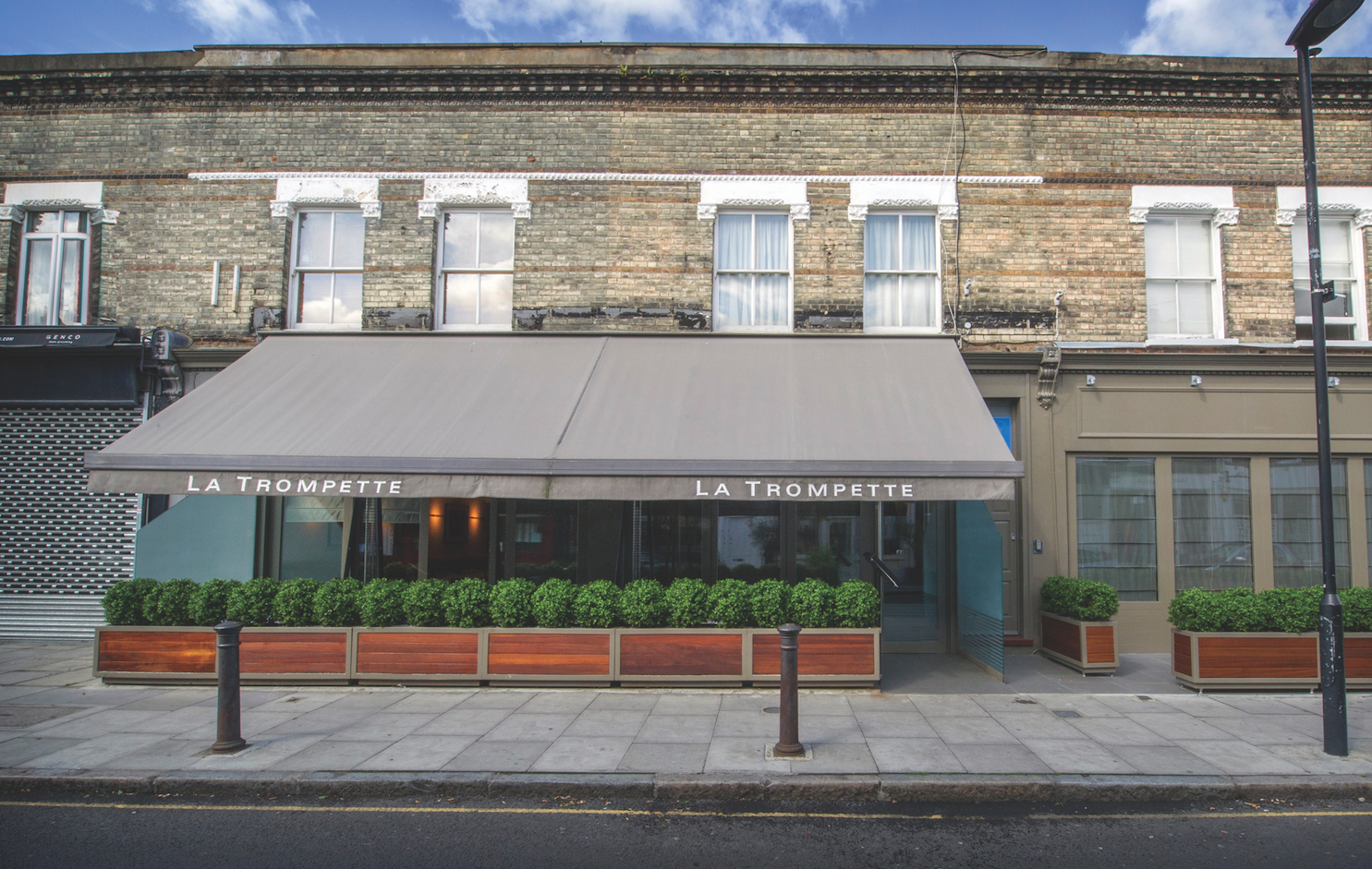 A haven for wine lovers from the Chez Bruce stable with a fine, explorative list by masterly, Stamatis Iseris and food from a chef who accrued 15 years experience at The Square.

Formerly the wine buyer for Brunswick House and St Leonards, Temper, and founder of Peckham Bazaar which celebrated Greek wines, Donald Edwards, who admits to having “a place in my heart for wines with really terrible labels,” is the intelligent, confident, opinionated head sommelier of Chiswick’s La Trompette. “It’s Nigel Platts-Martin’s baby, while Chez Bruce is Andrew Poole’s baby,” he says.

Given the advice, “not to ruin the list and have fun,” Edwards did not “do a hand-break turn,” on taking over in summer 2019. Rather, he has worked section-by-section to enhance the wine selection making it “a bit more representative of what is happening in the world.” He has included new listings from Stone, Vine & Sun, for example, “which work beautifully for the slightly more middle-classy people who live around Chiswick,” says Edwards, adding, “it feels like buying wine for my parents in a nice way.” That is not to say this is a dull list by any means – in fact, this draft is arguably the most embracing and alert window into the large cellar below which the restaurant has ever seen, including “Nigel’s paddling pools worth of Raveneau Chablis and all the surprise Burgundy that turns up.”

That cellar also features curing salamis. “Everything is done in house,” says Edwards of chef Rob Weston, “including our own black pudding and bread, with sauces done the absolute correct way.” This is also the only restaurant of the three in the group which also includes The Glasshouse, Kew, to offer a tasting menu, potentially featuring such matches as Benevolent Neglect Ribolla Gialla from Napa with staple linguine, black truffle and Pecorino, and Calmarossa Etna Rosso (Santa Maria La Nave) with Berkshire deer. Edwards manages to keep things eloquent without resorting to trophy bottles, noting, “we’re not about Americans flashing massive chequebooks – we’re a neighbourhood restaurant.”

Being respectful of the clientele’s desires and keeping pricing sane means La Trompette continues to be a magnet for sensational wine-rinsed meals, “which are hardwired into the culture here” including the monthly lunches for members of Tom Cannavan’s Wine Pages, and the event betwixt Antonio Galloni/Vinous and Austria’s Weingut Keller. “I’ve never worked with a chef as willing to tailor menus for wine dinners as Rob, who was Phil Howard’s number two during the glory days of The Square,” says Edwards.

Over time, expect more “sexy Jura stuff and fun central Europeans” as well as wines brought home from Edwards’ travels, including a mission to Ontario, “to marinate myself in ice wine after I perform manual labour in the middle of the night to harvest grapes at temperatures of minus 15 degrees.” In addition, with Gergely Barsi Szabo, Edwards produces the small-batch (fewer than 700 bottles annually) Hungarian wine, “Barsi Szabo Edwards.”

Formerly of The Gleneagles Hotel, Perthshire, head sommelier, Stamatis Iseris was drawn to London, “because it is the epicentre of the world’s gastronomy,” he says. “The wine trade can cover all their needs for whatever style of list they would like to build. And London diners – at least from a year’s experience at La Trompette – have educated, sophisticated palates.”

The sister restaurant to Wandsworth Common’s Chez Bruce, La Trompette in Chiswick magnetises bon viveurs. “We welcome all sorts of enthusiasts, from traditionalists who almost always remain in their comfort zone to the more adventurous ones such as the gentleman who went straight for our Japanese wine, or the regular who loved our recommendation for Georgian Orgo Rkatsiteli.” In addition, La Trompette hosts monthly lunches for members of Tom Cannavan’s UK Wine Pages. “We never get bored here!”

Given he has “almost complete autonomy” with the list, the Corfu-born Iseris has added his “personal touch” to the list, expanding his array of Greek wines, “adding lesser-known gems made from almost extinct white grapes, Aidani from Santorini and Cretan Plytó.” Iseris also rates Santorini 34. Bled from 120-year-old vines, it is “a pure, precise expression of the saline and citrusy Assyrtiko.” He also added Karydas Naoussa’s “savoury, earthy Xinomavro with grainy tannins.”

Iseris relishes food and wine matching. “Liaising closely with executive chef Rob Weston is paradise for a Sommelier,” he says. “One of the highlights based on guests’ feedback is Jackson Estate’s opulent, creamy, spicy Chardonnay from Camelot Highlands in the Santa Maria Valley, with hand-rolled linguine, black winter truffle and Parmesan. The weight and density of both food and wine match well, with the earthiness of truffles creating a contrast with the ripe citrus fruit and spice of the Chardonnay.”

Recent visits to regions have included the Mosel, Rheingau and Rheinhessen. “I love Riesling which is a very underestimated grape. Great to see German winemakers putting emphasis on making wines with a real sense of place!”

The sister restaurant to Wandsworth Common’s Chez Bruce, La Trompette in Chiswick magnetises restaurant regulars from near and less near, on account of the doughty dishes of Rob Weston (a former head chef of The Square for 15 years) and the dependable, largely food friendly, often well-priced wine list.

Here is a selection which juxtaposes a clean, characterful sparkler from Hugh Liddell at Hampshire’s Cottonworth, beside the Upper River Anton Valley, alongside the region endorsed by the fashionistas of Milan, Franciacorta, and also fine-tuned Prosecco from the sought after suntrap that is the hill of Cartizze. Still whites such as the non-vintage ‘Love and Pif’ Aligote from Yann Durieux, reaped close to Beaune, are but a few lines from a Meursault from hallowed Jean-François Coche-Dury. And Umbrian Grechetto which has bite shares the same document as ‘Honeymoon’ from supple, late harvest Parellada high up in Penedès, organic still English from Davenport, a Luxembourgeoise Rivaner, and one of London’s better-priced Koshu…

In darker tones, there are flights from arguably divisive Domaine Prieure Roch, created from parcels of vineyards bought from Domaine de la Romanée-Conti – perhaps on account of reflected glory – various pours bled from the Canary Islands’ volcanic soils, Georgian Saperavi, a 20 year old Greek Xinomavro (Naoussa, Château Markovitis) and both dry and sweet selections from Uruguay, as well as a neat precis of Bordeaux and ‘Iconic’ vintages from E. Guigal – Côte-Rôtie.

Lead by Stamatis Iseris (ex Gleneagles), the sommelier team see La Trompette as foremost a local restaurant, and such a varied list is intended to entertain as much as it can educate the guests who find harmony in this dining room and on the non-smoking terrace.

Note corkage at lunchtime is £15 per bottle, then £30 at dinner, and just £5 on Sunday and Monday nights.

Under the guidance of Nigel Platts-Martin, La Trompette’s wine offering has always stood out, but it doesn’t rest on its laurels, with some interesting suppliers and relatively moderate prices from top to bottom. A perfectly pleasant Alvarinho is yours for just £5.50 a glass; Van Volxem Riesling from the Mosel or Mullineux Chenin Blanc from South Africa are both less than a tenner.

Old-school classics are generally accessible thanks to careful focus on some of the ‘lesser’ appellations. Margins are generous on three-figure bottles, but affordable rewards will come from the Rhône. The list is also beautifully leavened with some of the most exciting new (often organic or biodynamic) producers from around the world.