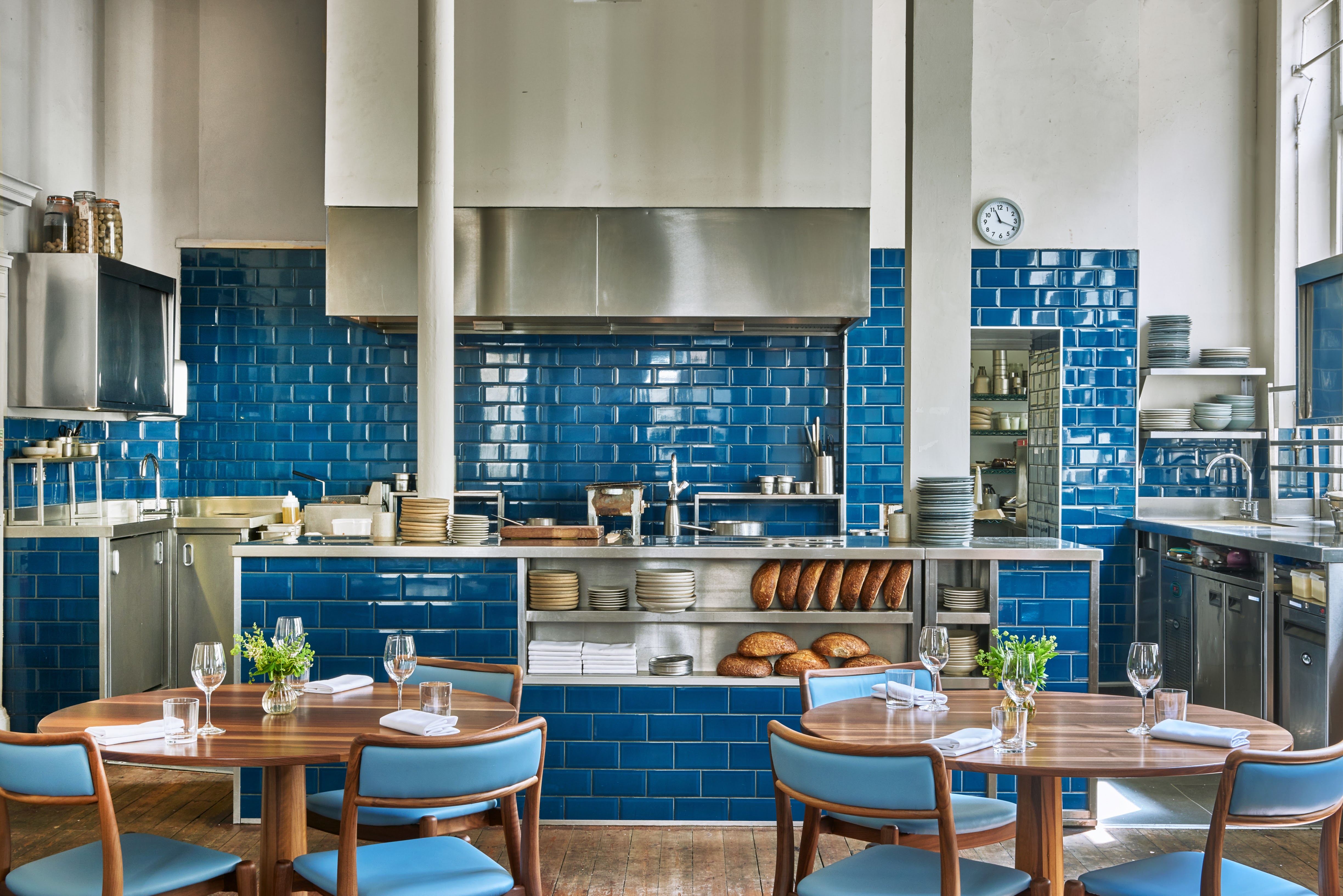 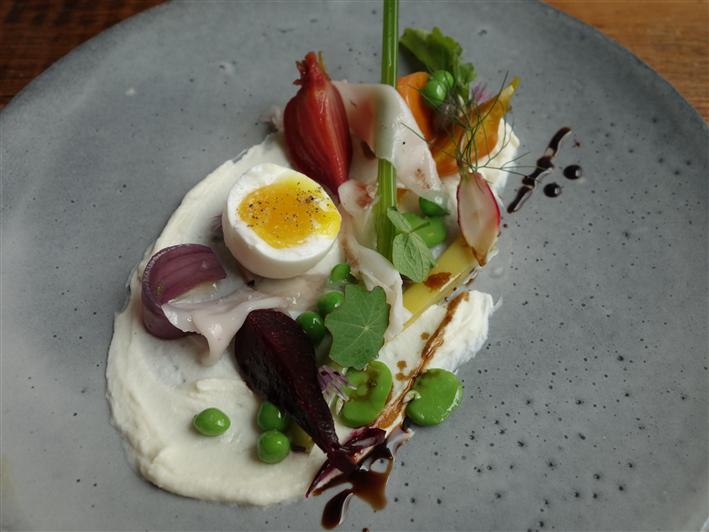 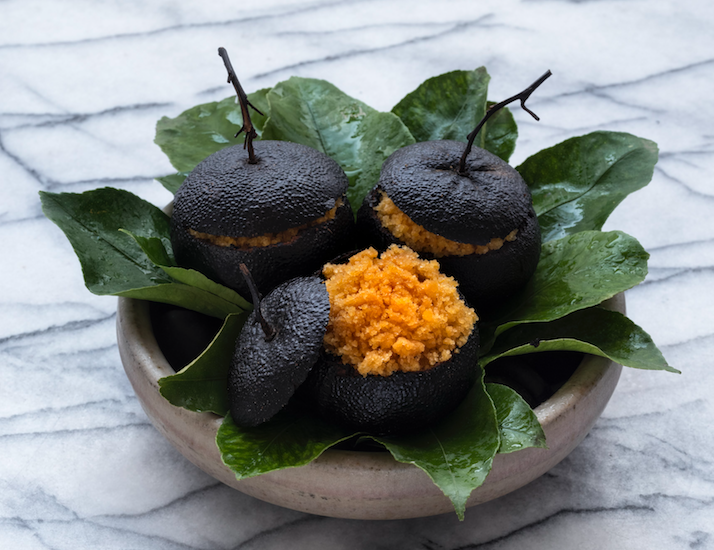 Meaningful sourcing underpins both the tasting menus of Orkney-born chef, Isaac McHale and the 500-bin wine list of the sommelier, Oliver Christie, who has recently fattened his half-bottle selection and introduced more producers from lesser-known regions.

Oliver Christie prefers to understand a guest’s preferences rather than leave them alone with the wine list meaning they often discover new finds. He is assisted by Mercury Music Prize awarded rapper and jungle, drum and bass MC, Dominic Smith, a.k.a. “Dynamite MC”. Christie says, “it didn’t dawn on me that he’s a big deal until I had the misfortune to find myself in Ministry of Sound where, on the stage with Ronnie Size was Dom the Somm!”

Christie loves building rapport with guests. Previously at Pied à Terre under mentor, Mathieu Germond (now of Noizé) Christie dreamt of doing the “big boys’ stuff” of ordering and accounting, but fast realised more fun was to be had on the floor.

Moving from being what Christie calls, “that funny crowdfunded restaurant seven years ago” to becoming “27th best in the world” (World’s 50 Best), The Clove Club today can claim an expertly refurbished wine list embracing producers who farm in a reasoned manner such as Gravner from Collio who gifted the restaurant 14 handmade glasses with pinch holes for older vintages. “Staying with Sasha Radikon, I spent a week in the Collio hills having long conversations with eight humble, honest producers, seeing vineyards teeming with life where there’s a heartbeat and rhythm from the biodiversity,”

Such meetings “shorten the distance between consumer and producer,” says Christie, who has visited up-to 40% of the producers whom he lists. “And from Isaac’s point of view, we visit the farms we get ingredients from, such as livestock farmer, Tom Jones who knows the story of his cows.”

Christie maintains a sense of joie de travaille during service. “Our industry has made wine seem mystical and therefore inaccessible. So, you won’t find me droning on about something which is exciting to me as a sommelier like soil types.”

In addition, Christie ensured his team can connect with guests not drinking alcohol, offering such pairings as the warm infusion, served from a glass teapot, of seasonal herbs, kelp and homemade koji to compliment the dish of koji, mackerel and cucumber.

Bringing more fun to the business of service is the miscellany of sake cups for the 25 strong range of brews, each with their own backstory. “Isaac loves sake, which has been a massive learning curve for me.”

When The Clove Club was “taken out”, Christie found the first weeks of life during the lockdown to be “a real learning curve”. He says: “I was no longer whizzing around the whirlpool of all-enveloping hospitality.” Next, Christie plans to spend a year working in the vineyards of Piedmont, “to see how wine is made, clean floors and tanks and prune vines.” And in time, expect to see him found an importer in Northern Italy. “When I speak to winemakers they tell me they’re fed up drinking their own wine or that of their neighbours…”

Head sommelier, Oliver Christie prefers guests to talk to his four-strong team rather than study the list, “so we can draw lines between our in-depth knowledge and what we have in the cellar.” He gives the example of “saline, oaky, high-altitude, old vines Verdejo,” Ossian 2014, as an affordable alternative to Super-Umbrian Chardonnay, Cervaro della Sala. “You’d never pick it off the list,” he posits, noting how well it works with chef Isaac McHales’ monkfish roasted over chestnut scented coals with turnips, and hollandaise enriched with pickled cherry blossom from the year before.

Christie puts guests first. “I’m at your table as many as 14 times during the night, building a rapport. The only thing that matters is you have something you enjoy – if I happen to open six bottles to do it, I will.” Previously at Pied à Terre under mentor, Mathieu Germond (now of Noizé) Christie dreamt of doing the “big boys’ stuff” of ordering, accounting and stocktakes, but realised more fun was to be had on the floor.

The Clove Club has “moved” from being what Christie calls, “that funny crowdfunded restaurant six years ago” to being rated “33rd best in the world” (World’s 50 Best). Hence the recent sea change from a list which serenaded foremost lovers of unmistakeably natural wines to accessibility. That is not to say natural wine is banished – rather, now there is quality control, hence the strengthened relationship with rigorous, Joško Gravner from Collio. “Joško said, ‘I’d be really interested in spending more time with you guys.’ He allows us older vintages and gave us 14 handmade Gravner glasses with pinch holes to serve his wine on the tasting menu. Normally I dislike gimmicky glassware but I learnt not everyone who takes the drinks pairing is super interested in wine, though they are interested in personality and story.”

Hence the array of sake cups, each with their own backstory, from the most popular, woggle-like metal vial with golden centre, to glass ones evoking, when upturned, Mount Fuji at dawn and dusk respectively. “Isaac loves sake, which has been a massive learning curve for me.”

The likeable Christie often invites producers for lunch with a view to intensifying his list, “and ask them what they have which I can’t buy on the High Street, such as the Syrah to die for from Knipser in the Pfalz.” Christie loves Syrah, incidentally, describing its wines as, “a gentleman in a purple smoking jacket with lime green trousers and moustache saying the wrong things sometimes while being utterly adorable.”

He also collaborates with broker, Fine + Rare on special parcels, indicating these acquisitions on the list with “F+R”. Chief executive, Patrick O’Connor allows Christie the right of return. “I was otherwise always sceptical of brokers.” And, with Stefano D’Andrea at sister restaurant, Luca, Christie is building a wine programme, so wines such as Pierre Gonon St-Joseph and gradually release. “Now we have a plan.”

As his list has grown, so has the time allowed for snacks and canapés, says Christie. “If you’re going to spend £500 on a bottle you don’t want to be rushed.” He also reaches guests via the intuitive booking system. “Initiated by Alinea, Chicago, ‘Tock’ allows guests to pre-pay their meal and gives scope to communicate preferences right down to still or sparkling water. So, the first time we meet isn’t when they come through the door.”

Similarly, wine service has significantly improved. “Bottles now come from the cellar in a cradle so we can decant, and we bought a red wine fridge. Temperature is even more important with reds than whites, whether a bottle is £35 or £3,500.”

Christie sees the restaurant as a two-way relationship.” Opening all these wines we wouldn’t normally have the money to taste for guests who hopefully get a fantastic experience facilitates our learning.”

Christie, who, next, is putting a half bottle list into being, hints he plans to expand the footprint of his cellar deeper into the town hall – “there are big renovations in hand!”

One ponders the point of such a clearly lovingly assembled list, sourced, it would seem in some cases from merchants no longer in existence, at a restaurant at which a good number of guests may only opt for the standard or premium wine pairing anyway? For this is a huge list hovering, like a starved bee, over many colourful crops, such is the way of the wine lover who falls in love monthly with new territories, or indeed the buyer spoilt with the daily offer of free trade tastings unravelling in our capital. And, in terms of mark-ups, ‘bipolar’ occasionally comes to mind for listings seem to veer from the reasonable to outlandish. This is a document which shunts, with social idealism, the extremely natural producer now easily at home in Shoreditch alongside the more polished fare more likely in residence at Mayfair dining rooms.

In fizz terms, the arguably overly powerfully priced late harvest Champagne from puritanical Jaquesson clearly contrasts the kinder costing on the home-grown, Rubenesque sparkler from home of cricket, Hambledon. The same sort of unusual mark-ups may be found with a 10-year-old Sancerre, albeit with good pedigree, which is positioned over the £200 mark and as such is likely, along with the £450 Terlaner, and £500 half of sweet German Riesling, destined to haunt the restaurant’s cellars, deep in Shoreditch Old Town Hall, for years to come. Such inflation could cause this reviewer, who is not a fan of monetary masochism, to instead head for cover in the nearest, reasonably priced Muscadet – a safe haven of a region which more often than not is cutely eager to over deliver.

Considering the territories covered, from Croatia to Kazakhstan a contents page would certainly help the wine lover return mentally, to their fellow guests faster given the list as is rather engrossing and takes more time than the meal to digest.

Billing themselves, modestly, as a modern British restaurant, but delivering haute cuisine in actuality, The Clove Club in Shoreditch Town Hall takes the name of the original supper club which operated above The Ten Bells pub, bringing together founders, Daniel Willis, Isaac Mchale (ex The Ledbury) and Johnny Smith in 2010.

An ‘ambient’ tea pairing is, intriguingly, offered to accompany the tasting menu, dishes of which could include Cornish sardine sashimi with smoked sardine and whiskey broth, duck and ginger consommé with indefatigable, century-old Madeira (que desperdício!), and apple tart Tatin.

The darling of the current fine dining scene. The right and focused wine list is full of small growers and wines of real interest in the grand space that is Shoreditch Town Hall.

Although there are fewer than 100 bins, the list shows curiosity and relatively tender mark-ups. Twenty wines are available by the glass, including reasonably-priced Mosel Riesling poured from magnum (Schieferterrassen 2012, Heymann Lowenstein) and 23-year-old finale of Pedro Ximénez (Toro Albalá, Montilla Moriles).

Relative bargains include Monte Bello 1989, if you have £200 to spare for a world-class wine.