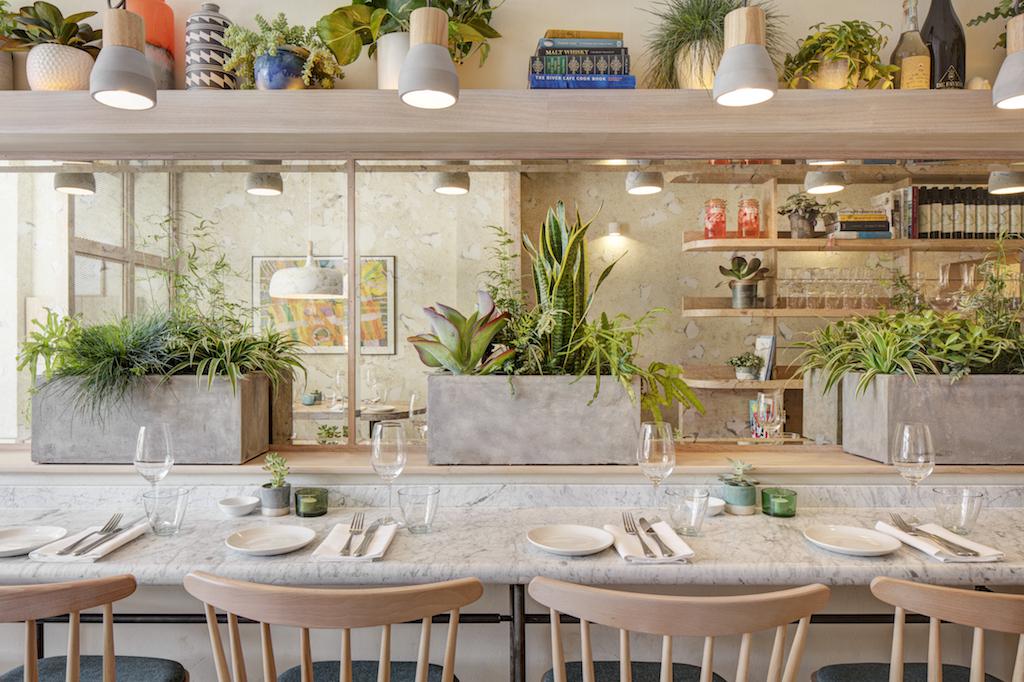 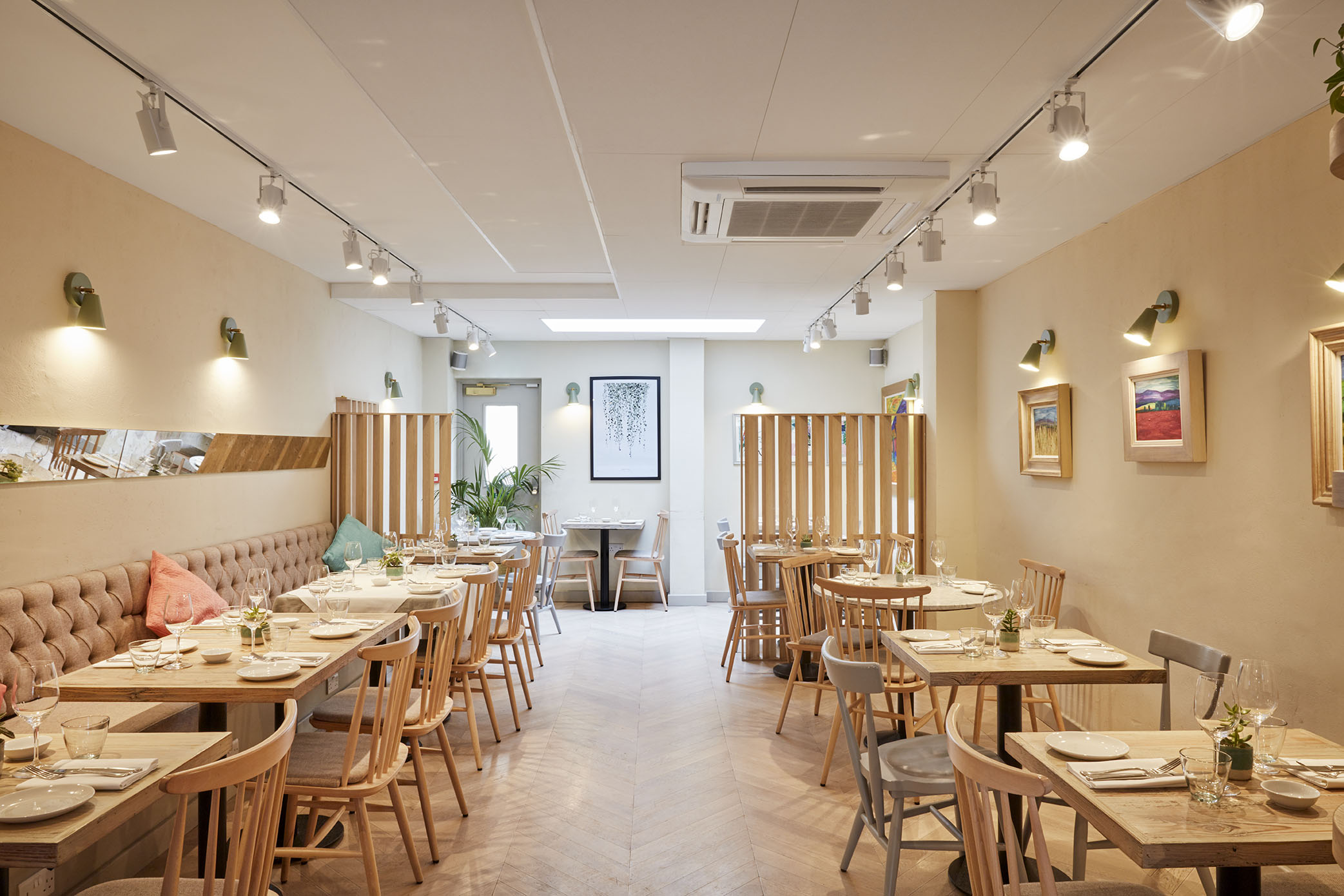 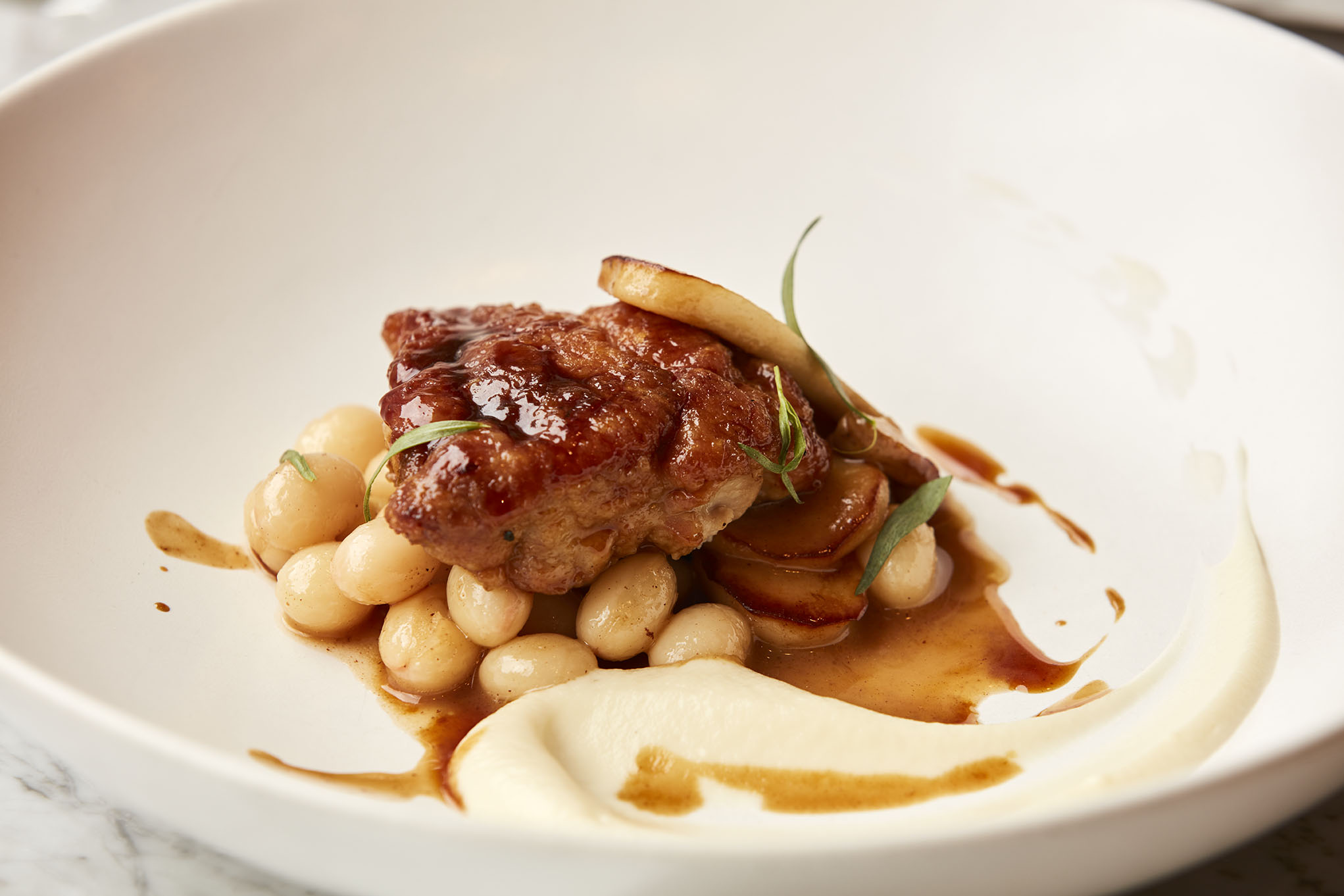 “There are tons of delicious things to get drinking at Lorne right now,” exclaims Katie Exton, who was part of the senior sommelier and wine buying team at The River Café, although she acknowledges her career “was really carved at Chez Bruce.” Exton is to the wine-loving diner, a very reassuring presence. Her balanced, reaching, and highly drinkable list at the chipper Lorne near Victoria bears testament to a harmonious palate and clear desire to delight her guests. It is also a beacon of sanity when it comes to pricing.

While pregnancy prevented Exton from attending her usual range of wine trips and tastings of late, her team, including two WSET diploma students, “made up for it in my absence,” she says.

Despite having to close Lorne’s doors for three months post a flood, Exton is pleased to report, “we are back and as strong as ever, having invested more in our single bottle fine wine list which always has low cash mark-ups.” This might include a 16-year-old rendition of Château Lagrange or Ten Minutes By Tractor’s McCutcheon Vineyard. In addition, in tandem with manager, Gianluca Bono (also ex Chez Bruce), who makes a lucent olive oil, Exton mentions she started a cellar plan for Lorne’s future, “so we have some lovely things like Rousseau, Fourrier, La Grange des Pères and Labet sitting happily for a few years – watch this space.”

Alongside Billecart-Salmon and Krug, Exton has added grower Champagnes, “so fans of Cédric Bouchard and Jérôme Prévost will be happy,” and uncovered new wines from Portugal, “which continues to impress us with fresher more refined wines that offer great value.” In addition, “areas the staff are loving right now include new-wave Californians such as fab looking FAILLA Chardonnay, Pax Syrah, and as always we have Littorai single vineyards Pinots at crazy prices.”

Complete, considered, craft rich dishes by chef-owner, Peter Hall, may include starter of red mullet with onion tart, fennel, olive, pickled carrot and bouillabaisse, followed by 55-day-aged rib-eye with black olive crumb, red pepper, yoghurt, pear and cavolo nero, then an apple terrine with Brillat Savarin, sable Sablé butter biscuits and salted caramel sauce to culminate, which is a good point to request the dedicated list of vin doux naturels, which may include Château Sisqueille’s 1946 Rivesaltes.

“Bar-wise, we continue to make our own batched cocktails, including the ephemeral Rhubarb Spritz. And gin-wise, we’ve discovered Garden Swift from the incredible Caprelous Distillery, whose eau-de-vies we list. And we have the briny, sugar kelp, beautifully packaged Isle of Harris Gin. So no excuses for a boring G&T here!”

A consummate professional with a sense of fun, contagious love for wine and an ability to explain it to almost anyone, Katie Exton is to the wine-loving diner, a very reassuring presence indeed. Her fresh, balanced, affordable and highly drinkable list is testament to her good palate and customer awareness, and is a beacon of sanity, offering lucky diners over 50 wines at or under £40 per bottle, including exciting German Riesling, incisive Hungarian Furmint, fragranced Clare Valley Arneis, plump Beaujolais and properly decent, rested red Bordeaux.

Prior to opening the minimalist but snug, breath of fresh air restaurant in February 2017, Exton, who describes herself as ‘sommelier, restaurant tourist, terrible runner, drinks snob and south Londoner’ was part of the senior sommelier and wine buying team at The River Café, ‘but my career was really carved at Chez Bruce,’ she says, ‘where I worked for seven years.’

Helping, no doubt, to engender loyalty in her team, Exton takes great pride in training all of the front of house staff ‘to be able to talk about wines which they enjoy.’ Indeed, two have done WSET level two, ‘and will do level three this year.’

The wine list ‘is quite personal,’ portraying the firm friendships which Exton and manager, Gianluca Bono (also ex Chez Bruce), who makes a cracking olive oil used at, and available for purchase from Lorne, have forged with winemakers and suppliers over the last decade, ‘and the regions we’ve been able to explore.’

Such friendships have legs. ‘We had a great few days with [Yarra winemaker] Mac Forbes who came to Lorne and helped as a Sommelier for four days and we let him take over our wine list for his stay,’ recalls Exton.

Most wines hark from small, family-run estates. ‘We like wines to speak of where they come from and have included benchmark wines from their region.’

Exton is a particular fan of Pinot Noir, Nebbiolo, Riesling and Chardonnay, and, in terms of regions, ‘we are strongest in Burgundy, Italy and Australia.’ Exton also applies cash margins on more expensive and off-piste wines. ‘We want people to drink great wines at Lorne to go alongside our delicious food.’

Recent investments include a parcel of Oregon Pinot Noirs. Exton explains: ‘with the ongoing challenges in Burgundy, we have been looking at new Pinot options for our customers. We also want to grow our Aussie list more. We have a nice Victorian Chardonnay offering, which aims to highlight the regional differences in Chardonnay just in Victoria (we have a Geelong, Mornington and Yarra V. Chardonnay) and we’d like to have a few more things like this.’

Begin with, alongside Nocellara olives, a smashing gin and tonic using Hepple gin from Northumberland, created by chef, Valentine Warner and foremost bartender, Nick Strangeway, or a flute of 1er Cru Blanc de Blancs Champagne – for under a tenner! Then order a starter of lamb sweetbreads with Roscoff onions, cauliflower, Parmesan and almonds, continuing with cod, octopus, harissa, ink gnocchi, rainbow chard and white beetroot as main, finishing with the recherché, excellent bay leaf and chocolate ‘Viennetta’ with blood orange and mint and a half bottle of one of the enticingly priced sweeties, such as the pink Moscato (Innocent Bystander).

Cursive text, soft pastel colours, a plethora of plants and simple green hue – if Lorne had an aura it would be calm and tranquil. Five minutes walk from Victoria station, which ironically is decidedly un-tranquil, it is part of a recent flurry of gastronomic ventures that have sprung up in this once culinary wasteland.

Its wine list is headed up by sommelier Katie Exton, formerly of The Square, who opened Lorne earlier this year alongside ex-The Square chef Peter Hall serving modern British dishes such as mackerel with ratte potatoes, cucumber and nasturtium.

Its wine list, much like its decor, is simple and unfussy, and all the better for it. Its by-the-glass and carafe menu is short and concise, with a good range prices, interesting whites and reds, including a £9 Chardonnay from Kumeu River and a bold Xinomavro from Naoussa in northern Greece. Notably its by the glass offer begins with a Beaujolais at £4.50 – an increasing rarity in London. Its by the bottle menu is diverse, balanced and reasonably priced.

An interesting list with plenty of choice – without being flabby – to suit all tastes.

“There are tons of delicious things to get drinking at Lorne right now,” exclaims Katie Exton of the modern classic, chipper Lorne, a pretty, textured, plant-enriched haven of a dining room with a playlist she calls a “pillow of warmth to make the room feel private.”

Exton was part of the senior sommelier and wine buying team at The River Café, although her career “was really carved at Chez Bruce.” Exton is to the wine-loving diner, a reassuring presence. Her balanced, reaching, highly drinkable list bears testament to a harmonious palate and clear desire to delight her guests. It is also a beacon of sanity when it comes to pricing, with plenty of joy at £40 or under on bottles discovered by both Exton and her co-pilot of the list, Alice Doran, the latter of whom arranges wine-paired game dinners at Lorne.

Alongside the likes of Pol Roger and Krug Grande Cuvée 164, Exton has added grower Champagnes, “so fans of Cédric Bouchard will be happy,” as well as showcasing homegrown sparkling rosé from Coates & Seely and slow-maturing Sekt from legendary Saar river valley winemaker, Peter Lauer.

Exton’s “infatuation point” wine-wise, is Italy. “I’m really loving Sangiovese at present and rate, too, the outstanding consistency and quality of Piedmont.” Furthermore, her quite “classic” customers are reaping the rewards of Exton’s re-discovery of everyday Bordeaux, of which “quality has improved.” Exton has also added several renditions from Greece this year and a dry Spanish Palomino. “The brilliant Viñateros tasting pre-lockdown is still lingering on my memory,” recalls Exton, hence the addition of an “incredible Bierzo” from César Márquez, nephew of Raul Pérez.

From the bar, the balanced, umami-rich, “Lorne Aperitif” is a perennial must order, combining white Port, sherry, Madeira, and rosemary-infused Chartreuse infused with rosemary. She has also paid much care to the non-alcoholic selection including Matthew Jukes’ “brilliant” Cordialities range, “which, having real palate weight, appeal to a wine drinker – the first soft drink I can sip throughout a meal.”

Complete, considered, craft-rich dishes by chef-owner, Peter Hall, who recently discovered pleasure in the wines of Romania, may include mac and cheese bites, the starter of glazed veal sweetbread with ale soaked barley, main of Hertfordshire beef and oxtail pie with mushroom purée, and poached comice pear, sorrel granita to culminate, perhaps with a glass of Yarra Yarra Pink Moscato (Innocent Bystander).

Be sure to seek out the single bottle fine wine list. This might include a Chambolle-Musigny from Domaine Ghislaine Barthod, Bruno Giacosa’s Asili Riserva Barbaresco, and an older rendition of La Rocca from Pieropan, all subject to cash mark-ups.

When not at Lorne, Exton tends to her budding toddler, Martha.