Hélène Darroze at The Connaught 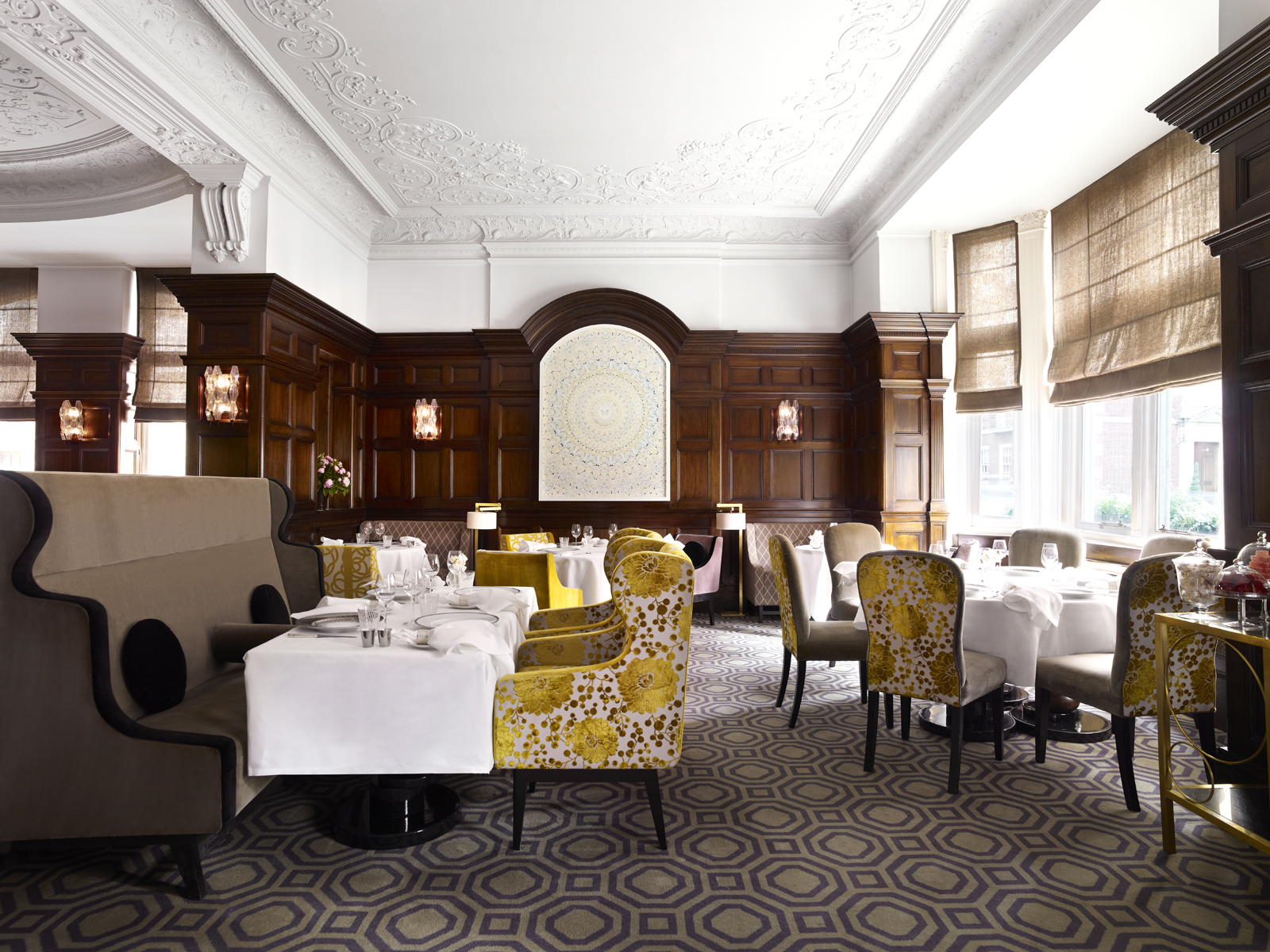 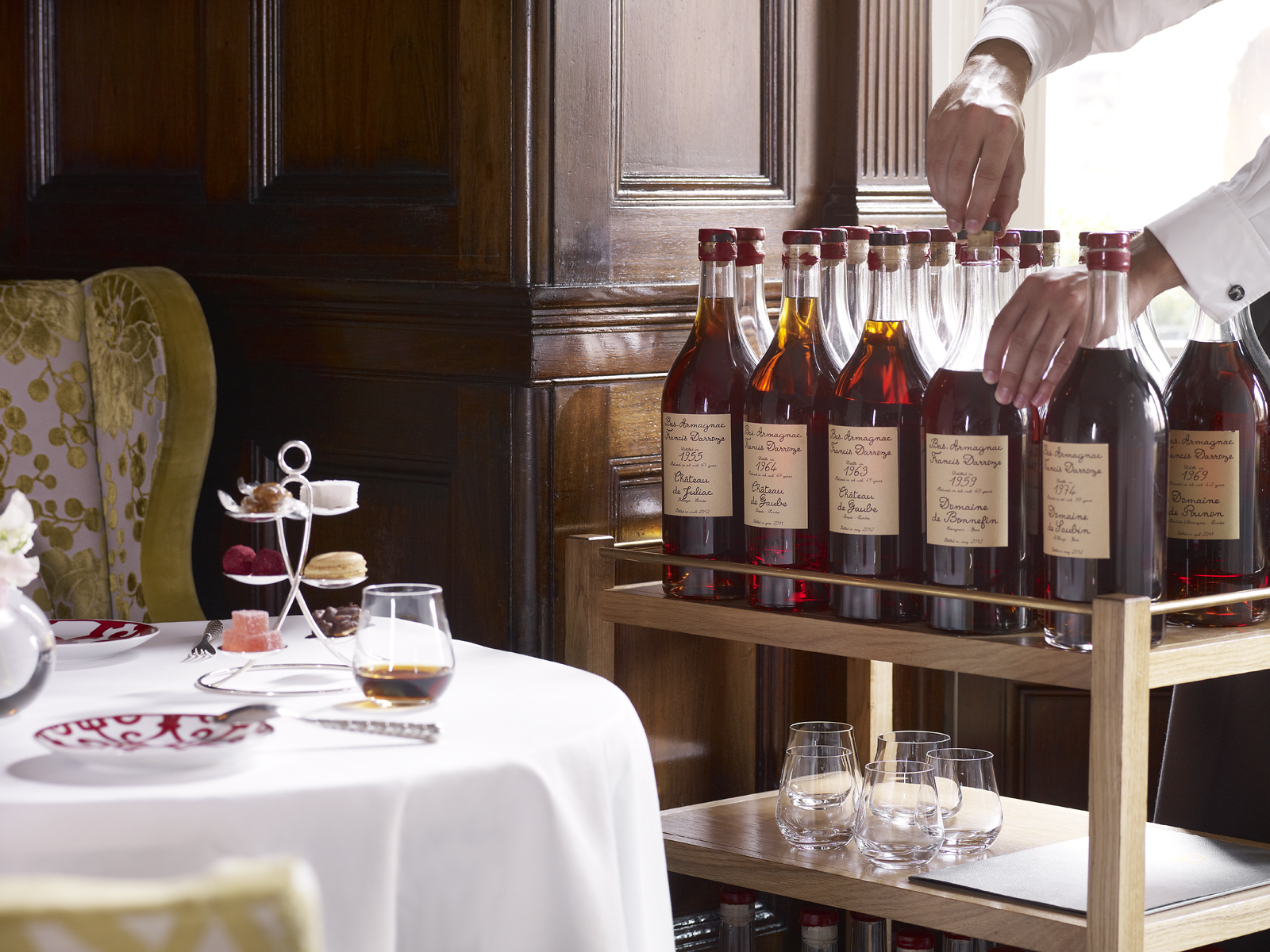 A forward-thinking buying strategy and rock-solid relationships with iconic producers ensures The Connaught retains a wealth of liquid assets.

While at The Connaught, Tuscan born bartender turned sommelier, Daniel Manetti accepted an impossible to refuse LinkedIn invitation to work for the Seabourn cruise line at Thomas Keller’s restaurants, “joining in Brisbane, sailing to New Zealand, New Caledonia and South America… opening lots of Californian wines and big Burgundies.” Back on terra-firma, he ultimately took vinous responsibility for Hélène Darroze and Jean-Georges at The Connaught, as well as the Coburg Bar and Connaught Bar.

You’re most likely to encounter him the restaurant of chef Hélène Darroze, who is the inspiration for Colette in Pixar’s “Ratatouille”, or three floors down at the clandestine sommelier’s table in the cellar, where he can provide a highly personalised experience. Representing 2,800 labels, 20,000 bottles slumber here, with further treasures encapsulated in 11 Eurocaves at street level. Besides the cellar is the micro-distillery of master mixologist, Agostino Perrone, whose 10th anniversary Connaught Bar gin stars wine as a botanical.

Manetti takes a “generous” approach to matching wine with Darroze’s French dishes, subtly accented with worldly yuzu, dashi and Tasmanian pepper, for example. “We go further, offering different tasting menus for the same table, choosing wines at that moment according to a guest’s preferences – a good way to interact.”

Running to 134 pages, Manetti’s list at Hélène Darroze aces in illustrious France, featuring bottles bought ex-cellar, “and never from brokers.” Expect a celebration of Burgundian domaines, Coche-Dury, Leflaive, Armand Rousseau, Comte Georges de Vogüe, Romanée-Conti and Prieuré Roch, as well as rare Bordeaux, like 1961 Latour in magnum, and – coming soon! – d’Yquem from 1927, 1935, 1945, 1947 and 1975. “We’re constantly asking for back vintages from Bordeaux châteaux,” pleads Manetti. There’s a lot of Krug, too, a bounty of Beaucastel, a coveted collection of the work of the late Gianfranco Soldera, and from Spain, Vega Sicilia dating to the early 1940s.

Although rich pickings abound in London’s most affluent postcode, it isn’t Manetti’s aim to “scare people”, hence if you’re in the market for a bottle of Albariño in the mid-£40s, then that is an option.

Entries on the often text rich list are collaborative, being co-written with producers, with some, such as Roagna of Piedmont, going so far as to stamp their entry with approval.

The hotel has privileged access to rare Armagnac bottled by Hélène Darroze’s brother, Marc, dating to 1918. “We sold all the 1900 which was perfect: very pure, very classic, with all components in the right place,” recalls Manetti.

Despite a lighter look, the standard of service at Hélène Darroze’s recently relaunched Connaught Hotel restaurant remains elevated. “The only little difference is we now offer a consommé at the start to prepare the palate,” says Tuscan-born bartender turned sommelier, Daniel Manetti, who, during the lockdown, began studying Cornell University’s Food & Beverage Management certificate online.

Manetti previously worked for Thomas Keller aboard the Seabourn cruise line. On terra-firma, he takes vinous responsibility for restaurants, Hélène Darroze, Jean-Georges and the new Grill, as well as the destination Coburg and Connaught bars and an exclusive cellar table three floors underground. Here, a good portion of the hotel’s 20,000 bottles (3,000 labels) slumber, supplemented by 11 Eurocaves at street level, with a minimum 500 more labels in bond. Beside the cellar is the micro-distillery of mixologist, Agostino Perrone, whose 10th anniversary Connaught Bar gin stars wine as a botanical.

Manetti takes a “generous” approach to matching wine with the cuisine of Helen Darroze, who inspired protagonist, Colette in Pixar’s “Ratatouille”. Her French dishes might be subtly accented with worldly yuzu, dashi and Tasmanian pepper. A “simply delicious” match comprised “savoury, strongly flavoured, medium-fat meat in a creamy sauce with 60-year-old dry Oloroso.”

While Manetti’s list, featuring bottles bought ex-cellar, but “never from brokers,” includes a celebration of Burgundian domaines, Coche-Dury, Leflaive, Armand Rousseau, Comte Georges de Vogüe, Romanée-Conti and Prieuré Roch, as well as rare Bordeaux, like 1961 Latour in magnum, and d’Yquem from 1937, the New World has become increasingly meaningful for Manetti and his guests. “I was impressed by newcomer producers on my recent visit to South Africa’s Hemel-en-Aarde and the Swartland,” he says. And for guests wishing to “experiment with new food pairings,” Manetti introduced four pages of craft beer and sake.

Although the prices of hallowed bottles here in London’s most affluent postcode often read like telephone numbers, it isn’t Manetti’s aim to “scare people”, hence the new Sommelier’s Selection of the Month, offering “great wines” like Silex and Hermitage Blanc “at an even greater value.”

The hotel has privileged access to Armagnac bottled by Hélène Darroze’s brother, Marc. “We’ve just introduced the Darroze Luxe Gascon 1888, matured for 77 years and bottled in carafe on April 19th, 1965. We have Carafe No. 1 of six…”

During the lockdown, Manetti galvanised relationships with producers via Zoom. “We did training with old world icons, Kracher, Leflaive, Latour, Montevertine, Egon Muller, Palmer, Roagna, Szepsy and Sassicaia, and, from the New World, Kelley Fox, David Sadie and Storm.” With assistant head sommelier, Lupo Thoenes, he also performed “deep analysis” on past sales, “to understand which wine regions, grapes and producers to enhance and remove.”  And now in fruition at the restaurant, “which is almost always fully booked” is the newly devised dedicated, at-table decanting trolley.

When not at The Connaught, Manetti is working towards his dream of obtaining a Private Pilots’ License.

Hélène Darroze at The Connaught