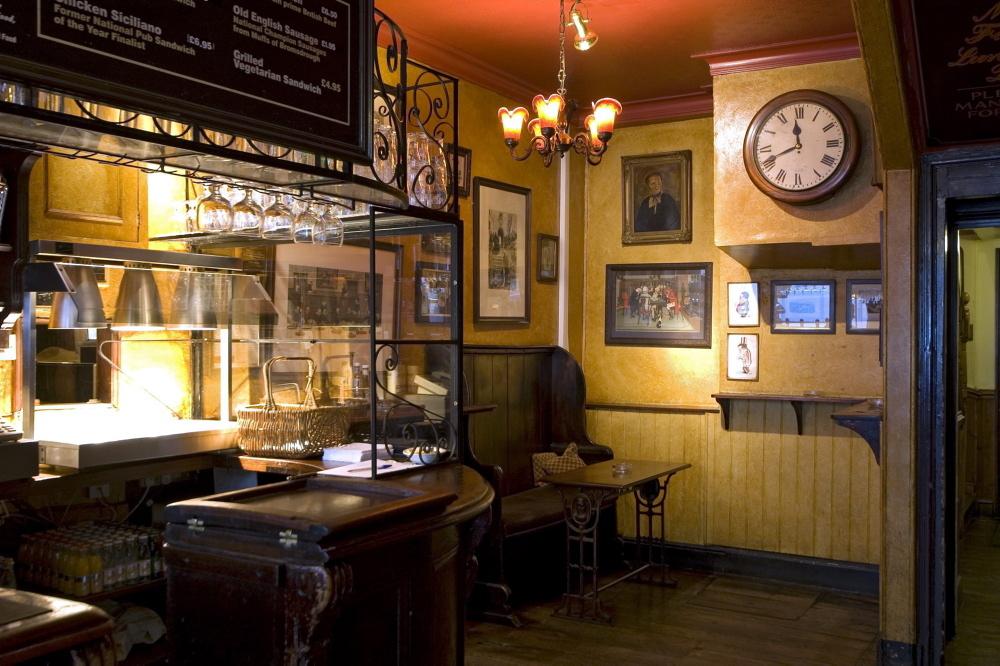 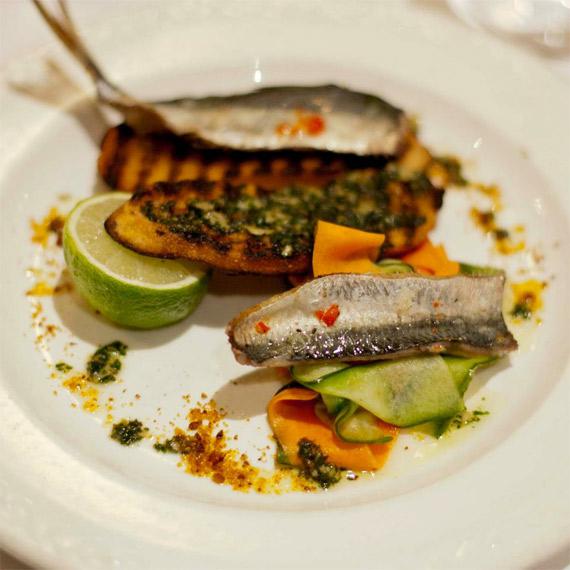 The flagship inn of Young's serves arguably the very best steaks in the capital with excellent vinous accompaniments.

A gloriously retro neon script wraps the bay window of Mayfair’s Guinea Grill, under which, in top hat and gold-edged green tails, doorman and restaurant writer, Dominic Rowntree emerges to welcome in diners. Legend has it an inn stood here on Bruton Place since 1423, when The Pound, named after an animal pen, looked over fields. It is charismatically run by the realisation of the ideal landlord, Oisin Rogers, an exacting, sharply dressed, eccentric Irishman with an angelic singing voice, who maintains a sharp wine list and sublime Guinness as well as ales from Young’s who are proud of their flagship pub. Complete with tall toque, Rodgers proved his adeptness, too, in the venue’s small kitchen on my visit.

Beyond the cosy bar is a counter previewing meat from Northumberland and Scotland on the bone cared for by butchers Godfreys, who have maintained a dry ageing room for The Guinea for decades, and a warren of tartan carpeted dining rooms.

Begin with Scottish native oysters and ozone-scented Manzanilla (Barbiana Selecta), or devilled kidneys on toast, perhaps with Tuscan Syrah, La Braccesca (Achelo), and follow on with a 16oz rib on the bone with a lamb cutlet on the side, as well as and garlic and parmesan courgettes. The main meaty act, which is cooked simply without char to preserve its flavour, will work with one of the many maturing Clarets from the large cellar, a posh Portuguese (Chryseia, Prats & Symington) or serious Spanish producer (Contador Rioja). Guado al Tasso’s Il Bruciato and Château Musar are often favoured by the many regulars. There are big guns too from the Americas (Almaviva and Opus One) and fine-tuned sweeties, such as Château Suduiraut to accompany Roquefort, which Rodgers doesn’t want to blight with crackers. For pudding, head chef Nathan Richardson realises such homely pleasures as Christmas pudding, available, it seems, well into the new year – made to Rodger’s grandma’s recipe. The only omission for the venerable British institution is English wine.

Service is fine-tuned, glassware is Riedel, and the ample steaks are arguably London’s best.

An inn stood on Bruton Place since 1423 when The Pound looked over fields. Today, a slightly Raymond Revuebar-esque neon script wraps the bay window of Young’s flagship, The Guinea Grill, under which a commissionaire, in top hat and gold-accented green tails beckons in diners for oysters, steak, ales and generally classic, rested wines. It is charismatically run by Oisin Rogers, an Irishman characterised by hair approximating that of a Lagotto Romagnolos dog and a surprisingly angelic singing voice. Twice a week, the excellent mine host dons a tall toque to help head chef, Nathan Richardson cook the famous bone-in rib-eyes, dry-aged by butchers, Godfreys. He also finds time to oversee The Windmill nearby.

Assisting Rogers on both pubs is sommelier, Vladimir Olaru who grew up in a vinous family. “My grandfather had a huge vineyard in Moldova, and my uncles still grow indigenous Rkatsiteli and Feteasca, as well as Pinot Noir.” Olaru came to The Guinea by accident and got stuck. “After a decade working for Marriot, I opted to take a year off to appraise matters,” he says. “I did some agency work to fill my weekends, and although I never wanted to work in a pub, one day they sent me to The Guinea where I met publican, Carl Smith who asked me to stick around for a week and see if I liked it…” Olaru recalls back then the pub, “felt like an unofficial men’s club – and we still don’t see many ladies today.” It’s a busier venue today, though, with the upstairs private room often serving as “an overspill for restaurant diners.”

In the cellar, wines vie for space beside Guinness kegs, while exclusive supplier, Berkmann holds younger vintages until deemed ready. “It’s a hard process to hunt older bottles, and I give our supplier a wish list,” says Olaru.

Begin with Scottish native oysters and New Hall Essex Pinot Grigio, or devilled kidneys on toast, perhaps with Cabernet Franc, which Olaru notes is increasingly popular with guests, such as that of Morande Adventure El Padre (Maipo), and follow on with a 16oz rib on the bone with lamb cutlet on the side, as well as garlic and parmesan courgettes. The main meaty act, cooked simply without char to preserve its wholesomeness, works with one of the many maturing Clarets or a magnum of Château Musar, noting this was one of the first London restaurants to showcase the Lebanese winery. There are big guns too from the USA (Insignia, Opus One) and finely-tuned sweeties, ranging from retro Muscat de Beaumes-de-Venise to Château Suduiraut to accompany Roquefort, which Rogers doesn’t wish to spoil with crackers.

Of his role, Olaru notes guests nowadays arrive with a substantially increased wine knowledge, “not like 10 years ago when everyone asked your opinion.” On seeing the feature counter, abrim with meat, few guests order white wines, which only account for “10-12% of sales.”

Aside from wine, Olaru is a fanatic of Bourbons which he saves for sipping on Sundays at home. And, during the lockdown, Olaru finally had time to ride the Harley Davidson he gifted himself for Christmas. Of the industry post-lockdown, he predicts, “it will be some time but it will recover. People will always want to eat with a nice glass of wine and we’ll be here to help them achieve that.”