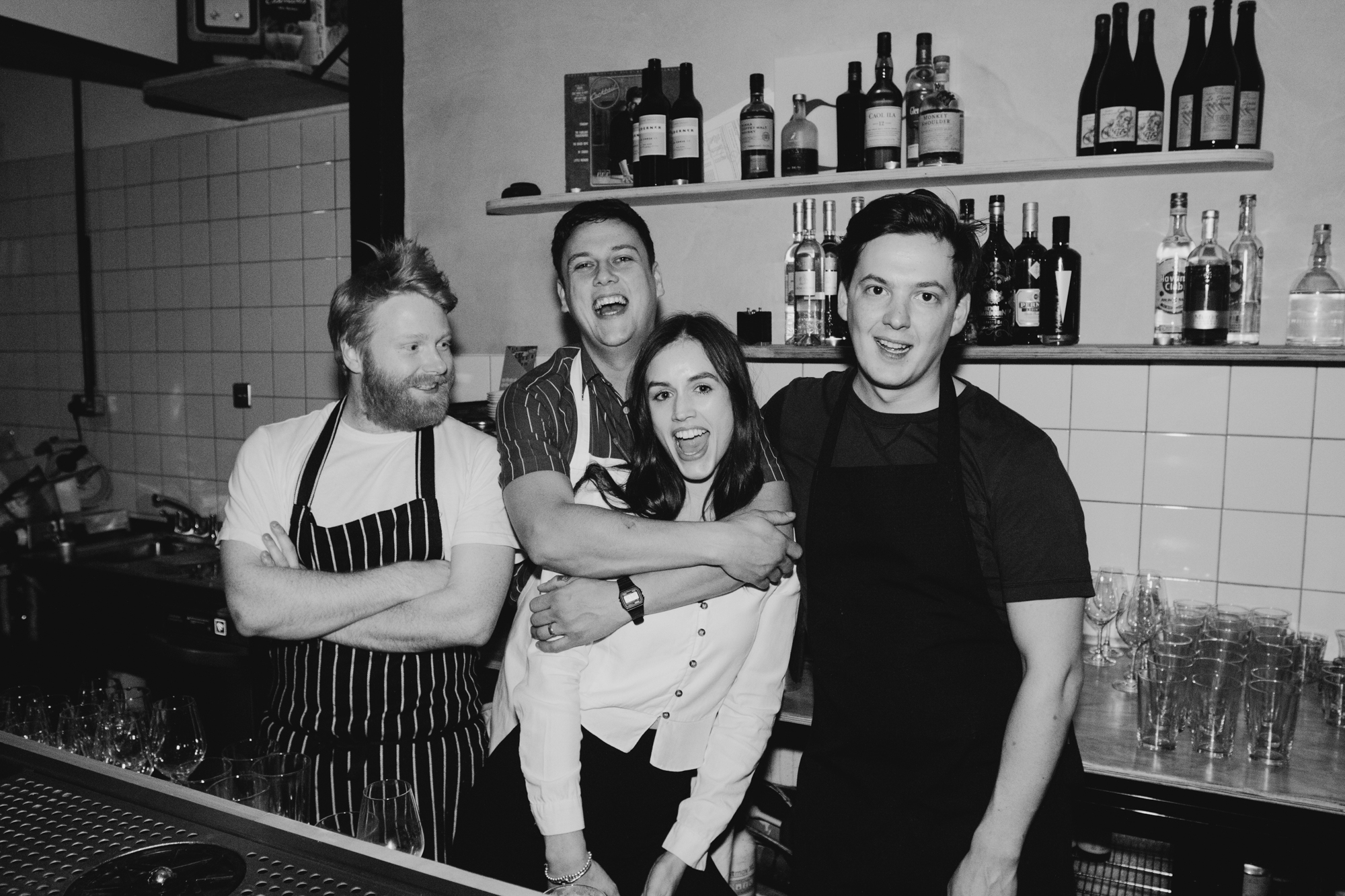 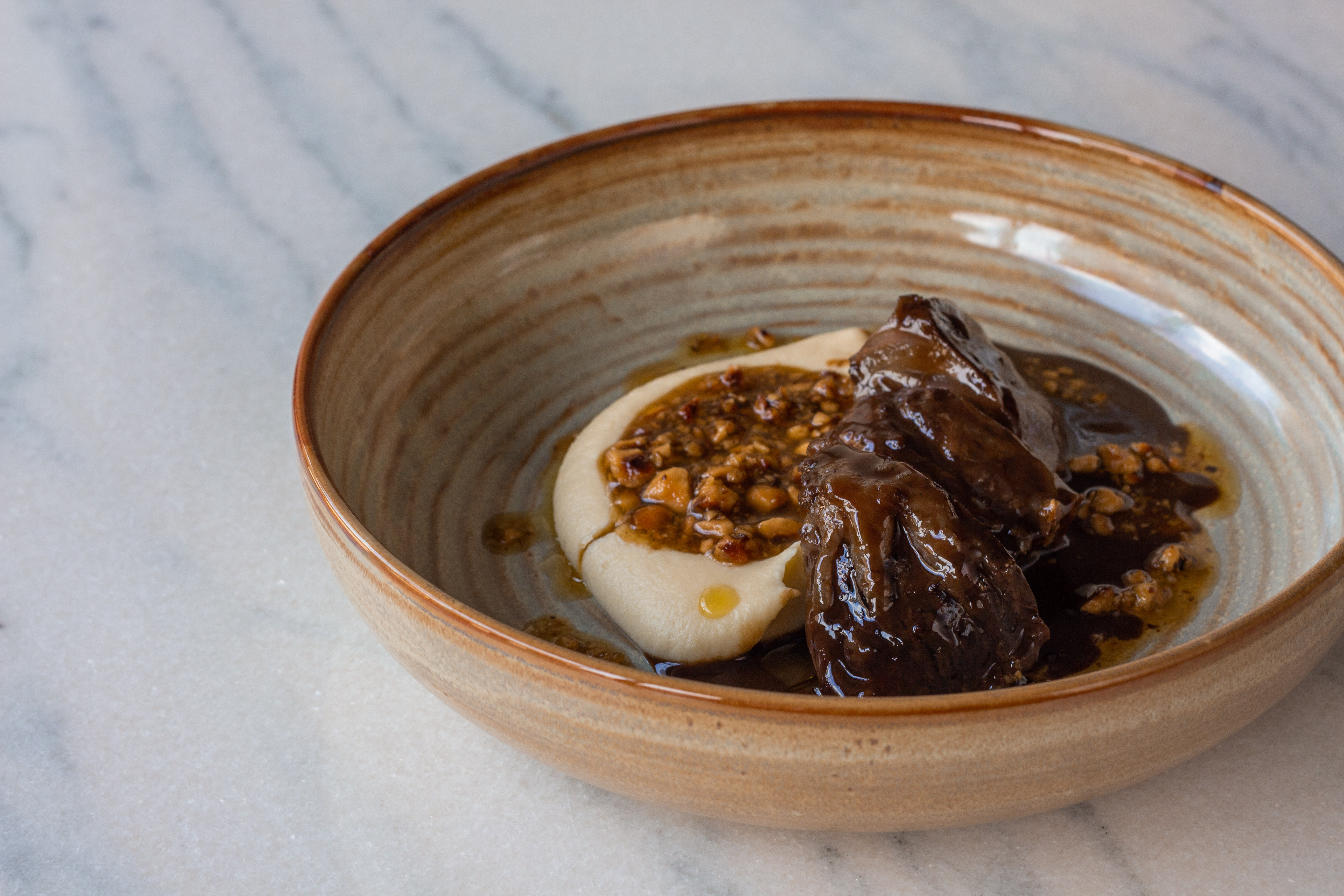 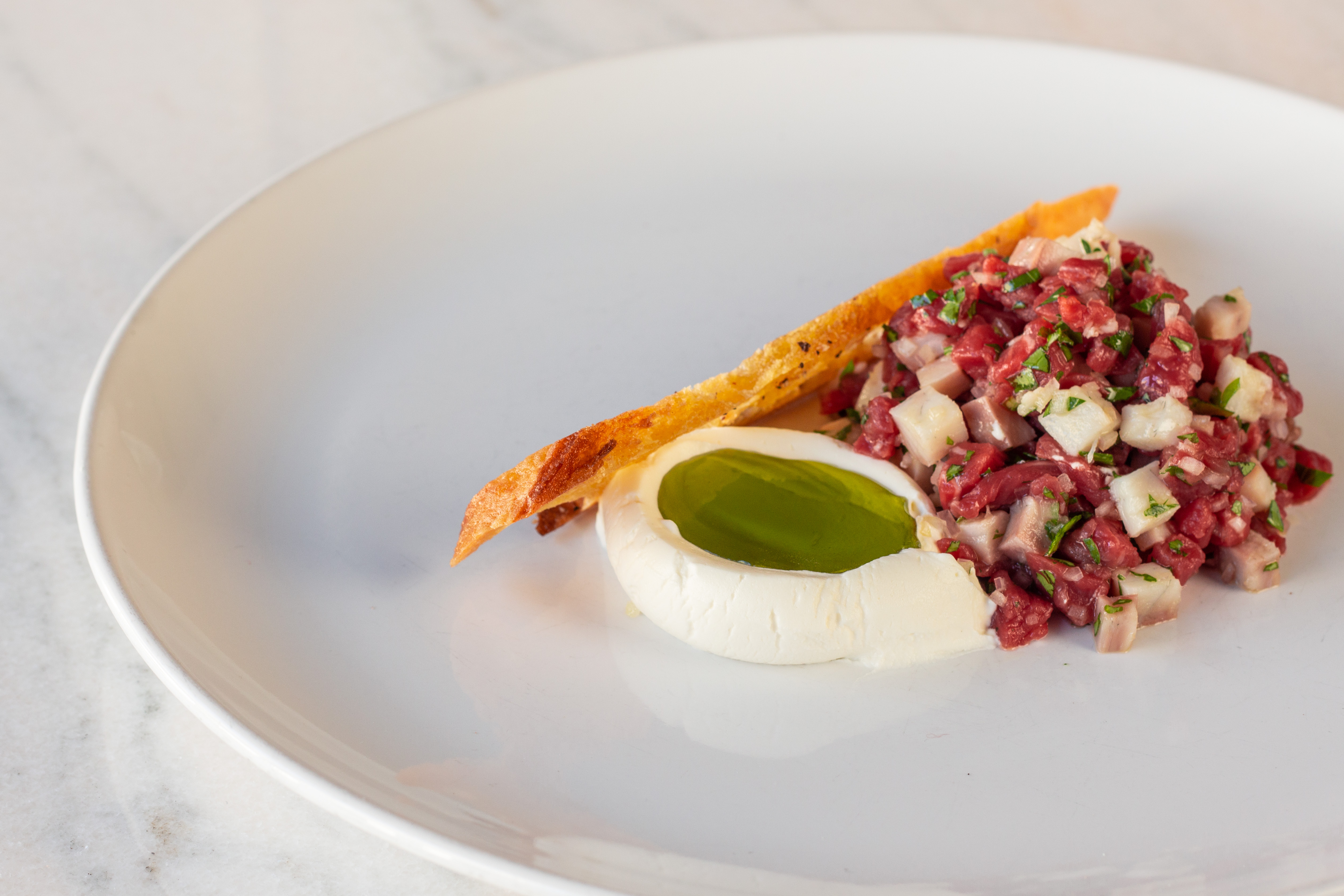 A deceptively humble bar and brasserie brought to you by a young team with extremely well-endowed CVs.

“None of us ever worked anywhere with such a friendly customer base,” says Top Cuvée’s co-founder, Brodie Meah of the clientele at the bijou, former Greek restaurant. This he transformed into a buzzing wine bar with make-up artist wife, Erin and her handy father who welded the tall tables, as well as co-founders, Max and Noel Venning of the acclaimed Three Sheets bar, Dalston.

Meah chose a crossover food and music artist to design Top Cuvée’s cartoon-like lettering. “Our name could be construed as relating to a fancy French place, but we don’t take ourselves too seriously,” he says.

Meah, from North Wales, cut his teeth in Manchester’s cocktail bars, founding a rum bar, before helping launch Dinner by Heston Blumenthal, Melbourne (RIP), a city with “a big coffee culture” which, going by the Assembly blend at Top Cuvée, he dearly cares about.

With exposed steels, a colourful wall concealing a cellar space, and plainly tiled open kitchen, Top Cuvée is located opposite The Arsenal Tavern. “I don’t know anything about football,” admits Meah when asked about match day clientele, although the supporters he met turned out to be “chilled.” The rest of the time sees people who enjoy, “hanging around their neighbourhood” come to dine, while on Sundays, Top Cuvée has a hospitality “industry vibe” catering to the area’s “mad brunch game.”

Meah and team, including chef, Graziano Pagliarulo spend on what counts for their guests, with wine-friendly dishes such as Brixham crab on soda bread with samphire and amaranth featuring, “not too many ingredients.” Retro but delicious, people phone up to check the crème caramel finale is available, “which I thought was a prank at first,” says Meah.

Featuring white Testalonga from Liguria, Loire Capitalism Rouge from Brendan Tracey and Domaine Chevassu-Fassenet Château-Chalon from Jura, the one-page list, “pushes people to try new things.” Picks such as Sam Vinciullo’s Sauvignon Blanc from Margaret River, described as, “expressive with the skin contact giving a massive hit of tropical aromatics” arise from “meetings all the time with new suppliers, fitting a wine on the list if it’s cool afterwards.” These can be taken away at 30% off – “we want to be an amenity.”

During lockdown, Meah and Venning quickly established “Shop Cuvée”, turning the restaurant into a bottle shop and grocers. As well as natural wines from the likes of Italy and Greece, shoppers could escape lockdown via French Comte cheese, and the scent of fresh bread, delivered by bicycle courier. And more recently, Top Cuvée joined forces with Yard Sale Pizza, curating the wine lists across all five sites, including natural Prosecco from Casa Belfi. “We’ve also got a brilliant new T-Shirt designed by Tubo Island, and a new tote bag coming soon,” notes Meah.

Aside from ABV, the playlist is a binding agent. “Still lots of American and British indie/garage/psych and increasingly sneaking in some lo-fi house after dark. Keep your eyes peeled on https://www.topcuvee.com/sounds as we finally catalogue our playlists and make them public!”

“There’s been more plate smashing since I’ve been here,” jokes Top Cuvée’s founder, Brodie Meah of the former Greek restaurant he transformed into a buzzing wine bar with make-up artist wife Erin and her handy father who welded the bases for marble tables, as well as creative co-founders, Max and Noel Venning of the acclaimed Three Sheets bar in Dalston.

With exposed steels, one colourful wall concealing a large cellar space, and an enticing oyster countdown penned on the otherwise plain tiles of the open kitchen, Top Cuvée briefly extends behind the armour of rolled shutters opposite the Arsenal Tavern pub and hostel. “I was a bit nervous – I don’t know anything about football,” admits Meah when asked about match day clientele, although the supporters he met turned out to be “chilled”, wanting “a speedier service.” The rest of the time sees people who enjoy “hanging around in their neighbourhood” squeeze in to dine at the counter, while on Sundays, Top Cuvée has a hospitality “industry vibe,” says Meah, adding, “this area has a mad brunch game.”

Meah, from North Wales, cut his teeth in many of Manchester’s cocktail bars, including his own rum bar, before helping launch Dinner by Heston Blumenthal in Melbourne, a city with “a big coffee culture” which, going by the Dark Arts roasters he uses at Top Cuvée, he clearly cares about.

Meah and team, including head chef, Dan Miller (formerly of Naughty Piglets and 1251) spend money on what counts for their guests, principally, “good food and no pretence”. He seems embarrassed when explaining how the menu ploughs the furrow of “the small sharing plates mantra” although dishes do have a certain “spin”, as demonstrated in the “relatable, wonderful” beef tartare with smoked eel “running through”, while pork terrine with lardo, chicken livers, pistachio and pickles is served with classic country style rustic bread.” Expect, too, the “best burrata with winter tomatoes and dukkah.” Retro but delicious, the crème caramel finale has proved so desirable that people phoned up to gauge its availability, “which I thought was a prank at first,” says Meah.

Meah chose to spell the venue’s name in cartoon-like lettering devised by a Bristol crossover food and music artist. “Our name could be construed as relating to a fancy French place, but we don’t take ourselves too seriously,” he says.

The wine list rarely runs to more than one page, “pushing people to try new things including some of the stuff I assumed would be challenging, but because the list is so small, they will try it.” Picks such as Okro’s Georgian kwevri-raised Mtsvane, and schist-sown biodynamic Loire Chenin Blanc from Le Berceau des Fées are a result of “meetings all the time with new suppliers, doing a tasting, setting up an account and fitting a wine on the list if it’s cool afterwards,” says Meah. Rather than magnums, look out for litre formats. All are available at 30% cheaper to take away – “we want to be an amenity.”

Also, expect a range of 500ml bottled cocktails including vodka martinis featuring Victory vodka and biodynamic floral vermouth from the Burgenland, and, unsurprisingly given the acclaim of the Venning brothers, a genuinely considered Sangria. There are a few curios on display from Meah’s private collection, too, such as the “tongue-in-cheek” Superior High Wine 69% Guyana rum.

Aside from the ABV, the playlist is Top Cuvée’s other binding agent, being “pretty loud – louder than most restaurants, lively and personal,” and perhaps featuring the recently acquired “amazing record” I was allowed to handle, Trouble Is a Lonesome Town (Lee Hazelwood).