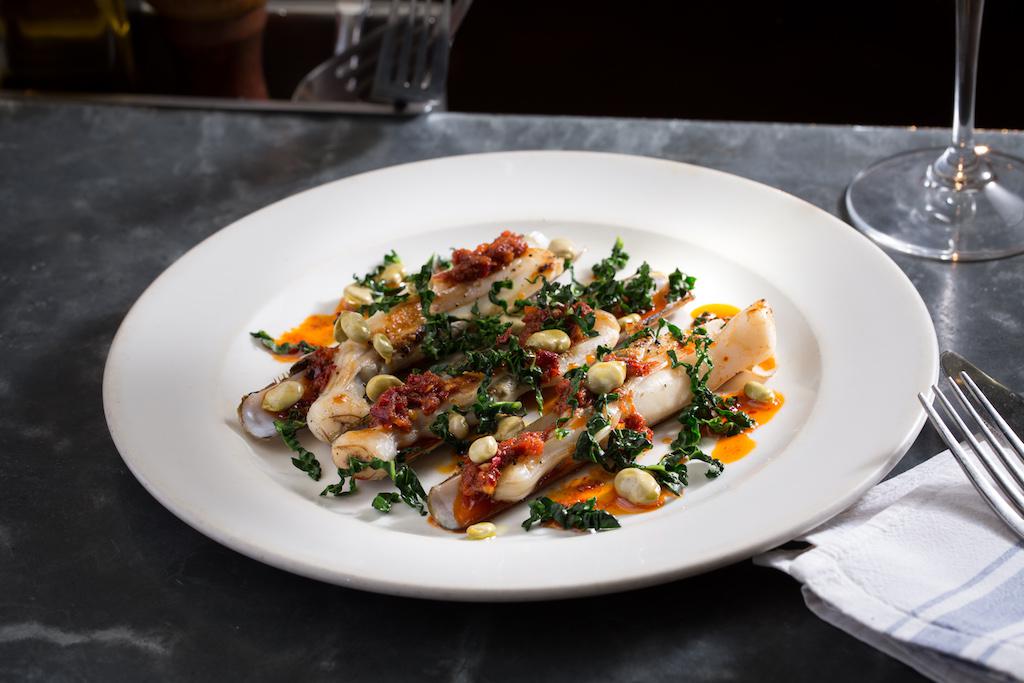 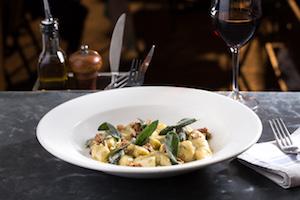 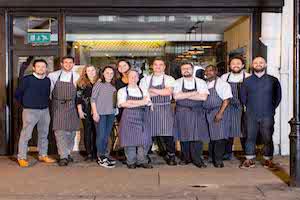 The meek Soho staple has a cheap, cheerful and very considered wine and beer list, supplemented by a little black book of aged and dazzling goodies.

Restaurateur and brewer, Luke Wilson was born to literary parents: Charles Wilson, the marine without a degree who edited The Times, Independent and Daily Mail, and, “doyenne of the glossies”, Sally O’Sullivan, who ran Good Housekeeping, Ideal Home and Options. Prior to 10 Greek Street, the graduate of Biological Sciences worked at The Zetter and The Ambassador, and for importer, Liberty Wines, serving the City.

In recent years, inspired by a seventeenth-century brewery in Bamberg, Bavaria, Wilson has reaped much respect amid his peers and patrons for his line of Braybrooke beers, crafted at the former grain store of his family’s farm in Market Harborough. These include slightly tropical New Zealand Pils in homage to 10 Greek Street’s Kiwi head chef and investor in the project, Cameron Emirali, a lighter Session lager, chocolatey Keller lager, and deep Cold Brew lager scented with coffee roasted near the brewery. Seasonal specials include a smoked lager, “which goes very well with grilled or roasted meats,” he says. Look out, too, for the “Smash”, i.e. “single malt and single hop.”

Wines within the avocado-coloured dining room must be driven by purity of fruit and a sense of freshness to earn a place on Wilson’s core list, with Greek wines being a recent addition, endorsed by bar manager, George Symillides (formerly of Heist Bank). These “are included not just because of our address, but because they’re very good,” says Wilson. Note the special relationship with Nyetimber vineyard, with the odd bottle of library stock featured in the Little Black Book. Being one of London’s first such supplementary lists of its kind, the stock is neatly written in pencil and might include below market price Château Lafite 1983, near incomprehensibly reasonably priced Ornellaia, and Montes Taita as well as toothsome stickies. These are often sourced from trusted private collectors.

Dishes by co-owner and chef, Cameron Emirali (previously of Wapping Project RIP) may include the small plate of fried cuttlefish and n’duja mayonnaise, and Roman-style pizzas such as the tomato, burrata, butternut squash and kale Trapanese, followed by orange financier and stem ginger ice cream. Emirali has strong form also in preparing exceptional feasting menus, perhaps themed around black and white truffles, for those wishing to take advantage of the private room downstairs.

When not at 10 Greek Street or brewing in Leicestershire, Wilson continues to work on a book about the restaurant.

Co-owner, Luke Wilson is always keen to rise to the challenge to satisfy guests seeking “anything new and interesting,” with sips of far-reaching finds including the Zivania brandy which recently promoted bar manager, George Symillides (formerly of Heist Bank) brought back from his native Cyprus. He also showcases an expanding range of lagers bottled at the Braybrooke Beer Co, Market Harborough which he is closely involved with. Brewed in a former grain drying store to what Wilson terms, “exacting German principles,” renditions may include Keller Lager, Session Lager, New Zealand Pils, a Cold Brew Coffee lager, and smoked lager, which he says works exceptionally well with food such as Herefordshire rib eye with cardoncelli mushrooms, kale and horseradish from the kitchen of 10 Greek Street’s co-owner and chef, Cameron Emirali.

Other dishes by Emirali (previously of The Wapping Project) may include lamb tartare and anchovy, then trout, blood orange, puntarelle, chilli and squid ink aioli, and the final icy kiss that is the pear sorbet and vodka.

A graduate in Biological Sciences, with previous hospitality roles including The Zetter and The Ambassador, as well as experience serving the City via importer, Liberty Wines, Wilson recently enjoyed a behind-the-scenes tour of Nyetimber during harvest, “and had an amazing lunch sitting in the vineyards!”

Wines must be delicious to earn a place on Wilson’s main list, with choices driven by purity of fruit and a sense of freshness. He also implores guests to ask to see his Little Black Book, where, neatly scribed in pencil along with the remaining tally of bottles, labels might include Liquid Farm, Four Chardonnay from Santa Rita Hills, Felsina, mature Fontalloro from Tuscany, and Clos des Papes Châteauneuf-du-Pape. “These wines are sourced from private cellars, auctions, and fine wine lists,” Wilson reveals.

When not at 10 Greek Street or boiling beer in Leicestershire, you may find Wilson on vinous reconnaissance at Albertine, Shepherds Bush. He is also contemplating a book about 10 Greek Street.

Co-owner, Luke Wilson, a graduate in Biological Sciences, has been inextricably linked with restaurants for the past 12 years, with previous roles at The Zetter and The Ambassador. Prior to opening the Spartan of décor, but cosy of welcome, or functional but fun, 10 Greek Street, he worked for importer, Liberty Wines, looking after accounts throughout the City.

‘Our main list is concise and constantly evolving with a range of grapes, styles and regions,’ he says, modestly. ‘We try to make it as accessible as possible, with bottle prices ranging from £20 to £60.’ Wines must be delicious to earn a place on the list, he adds, with choices apparently driven by purity of fruit and a sense of freshness. By the glass, there are rich pickings, including a flute of Nyetimber for well below £10.

Guests should also ask to see the ‘little black book’ in this dining room, as well as at sister site, the Refectory at Whitechapel Gallery. Neatly scribed in pencil along with the remaining tally of bottles, this lists such treasures as the beautifully illustrated Liquid Farm Golden Slope Chardonnay, pre-2000 Haut-Brion, vibrant vintages of Tignanello and single-vineyard Ports. ‘These wines are sourced from private cellars, auctions, and fine wine lists,’ says Wilson.

Wilson recalls memorable winemaker dinners at 10 Greek Street, which has a characterful private room, including Barolo producer, GD Vajra (Piedmont) and Jeffrey Grosset from Clare Valley, Australia. ‘I remember listening with great interest to Jeffrey Grosset as he talked about screwcaps. As one of the original proponents of the closure, he made what might be considered a somewhat mundane subject quite fascinating!’

Built to be wine-friendly, dishes by co-owner and head chef, Cameron Emirali (previously of The Wapping Project), chalked on the blackboard, may include starter of whole quail with n’duja and lentils, followed by Barnsley chop, celeriac, sprouting broccoli and anchovy, or chateaubriand with duck fat potatoes, cavolo nero and horseradish, culminating in pudding of pear sorbet and Strega (indeed there are plentiful postprandial drinks to choose from).

Also look out for the Northamptonshire made, unfiltered and unpasteurised amber kellerbier lager, brewed by Wilson and Emirali – Braybrooke Beer Co.