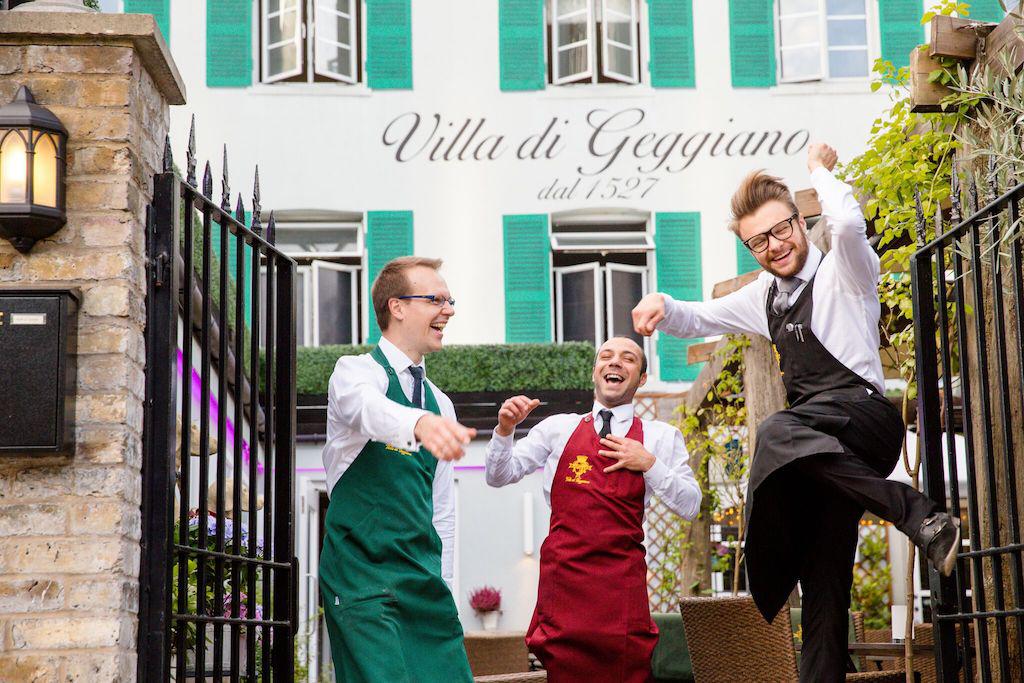 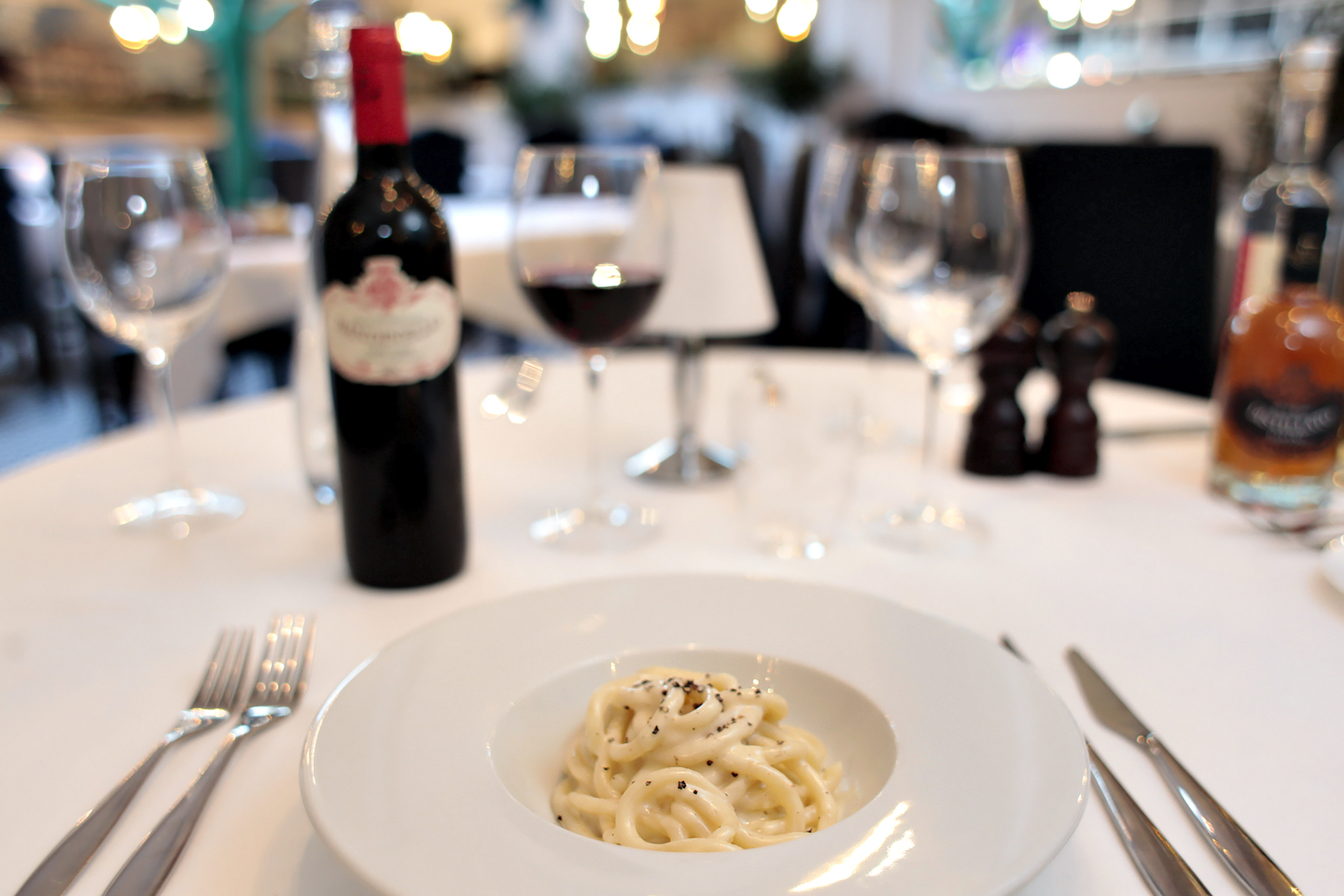 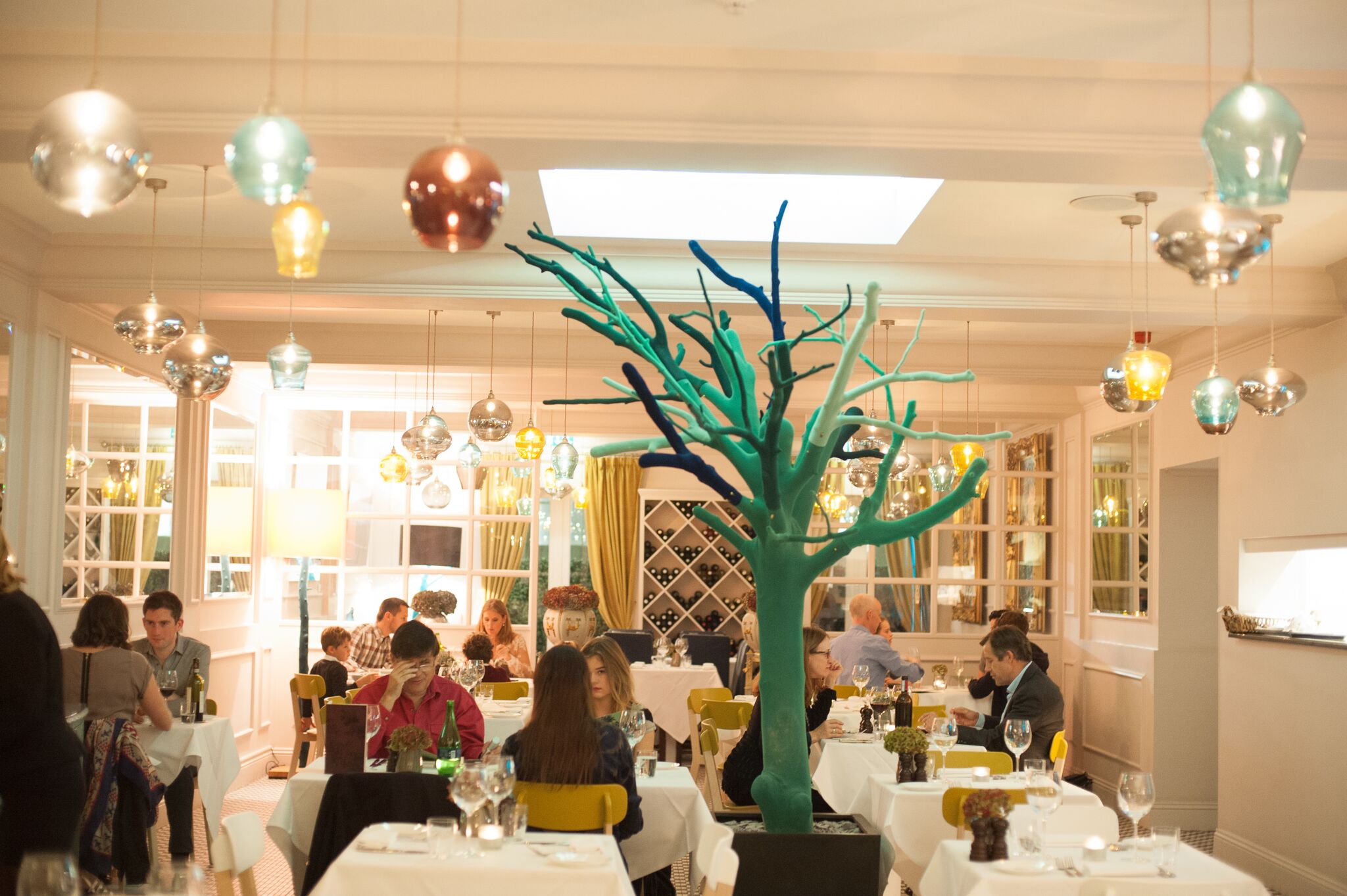 Glitter balls featured during the eight-year tenure of Frankie Dettori MBE and Marco Pierre White when this traded as Frankie’s Cocktail Bar and Grill. Only the mosaic floors remain from that era at what is now Chiswick’s Villa di Geggiano, its name homage to the fourteenth-century palazzo, winery and outdoor theatre of custodians, the Bianchi Bandinelli family. This dynasty was the first producer to export Chianti to Britain in 1752; they also raised Pope Alexander III. The picture-postcard Tuscan estate has, more recently, been recorded on the silver screen, including Liv Tyler’s debut, Stealing Beauty, while their wooden boat featured in the Talented Mr. Ripley.

With jaunty trompe l’oeil shutters, the number of windows within the street-facing aspect of the glamorous restaurant mimics the number of windows at the Italian palazzo. Stunning spaces filled with art chosen by operator, Ilona Pacia, as well as family photos unravels off the large terrace, shaded by grapevines. These include private dining rooms and cosy lounges, with the main restaurant featuring a tree, and, through glass doors, a piano room. Indeed, musicians from the Metropolis Recording studios opposite have ventured in through a private gate to tinkle the ivories of the in-house Steinway.

The draw to wine lovers is the cellar of often organic and biodynamic producers including those from the original Villa di Geggiano in Castelnuovo Berardenga, which produces just 40,000 bottles yearly. A few of the treasured, distinctive purple bottles from the eighteenth century are on display.

In charge of matters vinous is Sardinian born Alex Medis, who left the Italian army after five years, jolted by the September 11 attacks. He says: “in hospitality, we may make mistakes, but no one tries to kill us!”

Medis previously worked with mentor, Sara Bachiorri at Chez Bruce, “and I still call her for advice because she is now my account manager at supplier, WoodWinters.” He also worked at Rick Stein, Barnes, “to learn about shellfish.”

Begin with excellent Conegliano fizz from Sommariva with slender grissini before entering the menu proper of Head Chef, Emanuele Morisi (formerly of Assaggi), who imports meats and cheeses direct from Tuscany and makes his own pasta. Dishes may include black tempura of tiger prawn and monkfish with samphire and wasabi mayonnaise, perhaps partnered with tense, crisp, Villa di Geggiano Rosato Sangiovese. Follow on with saddle of venison with crispy polenta and blueberry sauce with Super Tuscan, Sister Moon from Il Palaggio, the estate of Sting and Trudie. Villa di Geggiano is the exclusive distributor of the prodigious couple’s range. Follow on with brandy-esque distillate, Divino crafted by Geggiano’s neighbour, with peach tart with cocoa and amaretti crumble.

In addition to considered sections on the well-known regions of Barolo, Barbaresco and Bolgheri, Medis loves seeking out quirky wines, replacing, for example a Riesling with an Incrocio Manzoni. “There’s space for wine from every region of Italy on my list,” he says.

During the lockdown, Medis quit smoking. “As a sommelier, my palate is my weapon and I must do everything to keep it in good shape.”

When not at Villa di Geggiano, as well as being a collector of Marvel comics, Medis is magnetised by technology, including “how radio waves work.”

Thankfully consigned to the past is the formerly muddy paint job miring the frontage, and hideous glitter balls within, featuring during the eight-year tenure of Frankie Dettori MBE and Marco Pierre White when this traded as Frankie’s Cocktail Bar and Grill. The mansion also, arguably more nobly, saw service as a school and working men’s club. Only the now immaculate mosaic floor remains from the era of MPW at what is now Chiswick’s Villa di Geggiano, its name homage to the fourteenth-century palazzo, winery and outdoor theatre of custodians, the Bianchi Bandinelli family. Their influential tapestry of history saw their dynasty become the first producers to export Chianti to Britain in 1752; they also raised Pope Alexander III (elected 1159-81). Their picture-postcard Tuscan estate (and postcards are stacked on the bar) has, more recently, been recorded on numerous film reels, including Liv Tyler’s debut, ‘Stealing Beauty’, while their shiny wooden launch featured in the Talented Mr. Ripley.

The number of windows within the street-facing aspect of the glamorous restaurant serendipitously echoes the number of windows at the Italian palazzo, albeit Chiswick has jaunty trompe l’oeil shutters. Stunning spaces filled with work from seven artists as well as family photographs and trinkets unravel off the pergola-shaded terrace, including a private dining ‘art room’, cosy lounges, and the main restaurant with a tree, beside which is a private of acoustics but visible dining room, with club-like meeting rooms extending above, including one home to a humidor. These areas are as likely to magnetise A-list actors, the occasional politico seeking refuge from the fallout of their divisive stance on Brexit, and musicians from the Metropolis Recording studios opposite who may venture in through a special gate to potentially tinkle the ivories of the in-house Steinway, as they are customers bored of the stripped-down décor and single glazing of Hammersmith’s River Café. Because arguably, here, the food is better and the welcome warm.

The draw to wine lovers is the cellar of organic, biodynamic and small production (40,000 bottles yearly) wines of Villa di Geggiano. And a few of the mouth-blown, distinctively purple bottles from the eighteenth century are on display.

In charge of matters vinous is Veneto-born sommelier, Simone Zanibellato, who began his career in Tuscany at wine resort, Adler Thermae, replete with ‘Brunello wine baths’ before moving to London where he worked at Alloro, Mayfair (RIP) and Locanda Locatelli.

Of the concise list, over 30 bottles cost fewer than £50 with smarter bottles such as Fontodi, Conterno, Fuligni and Le Macchiole north of £100; corkage is fair.