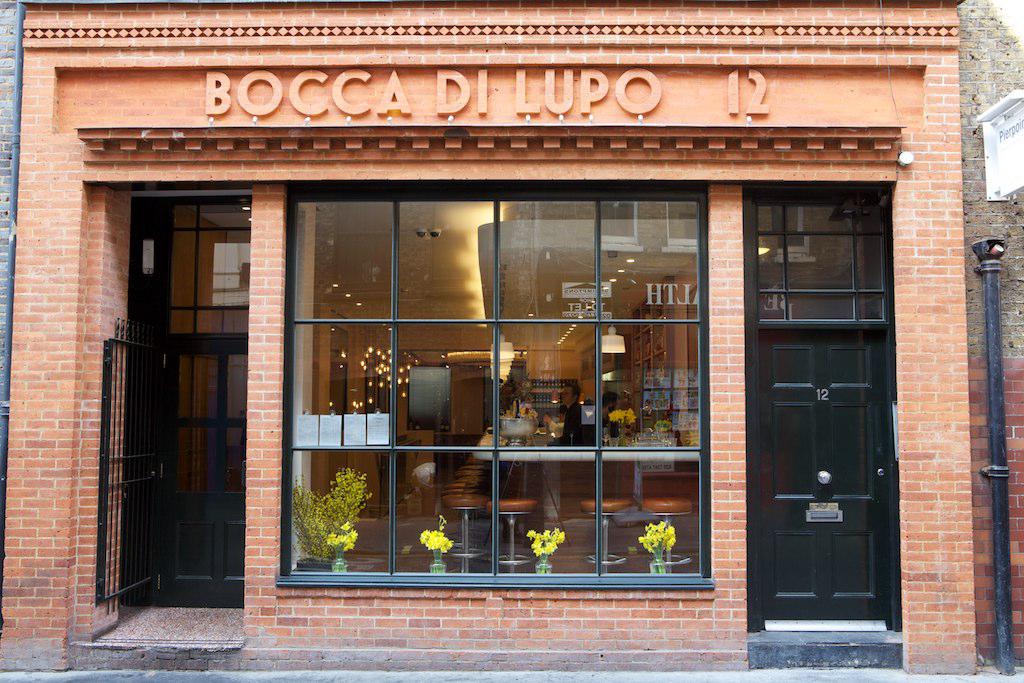 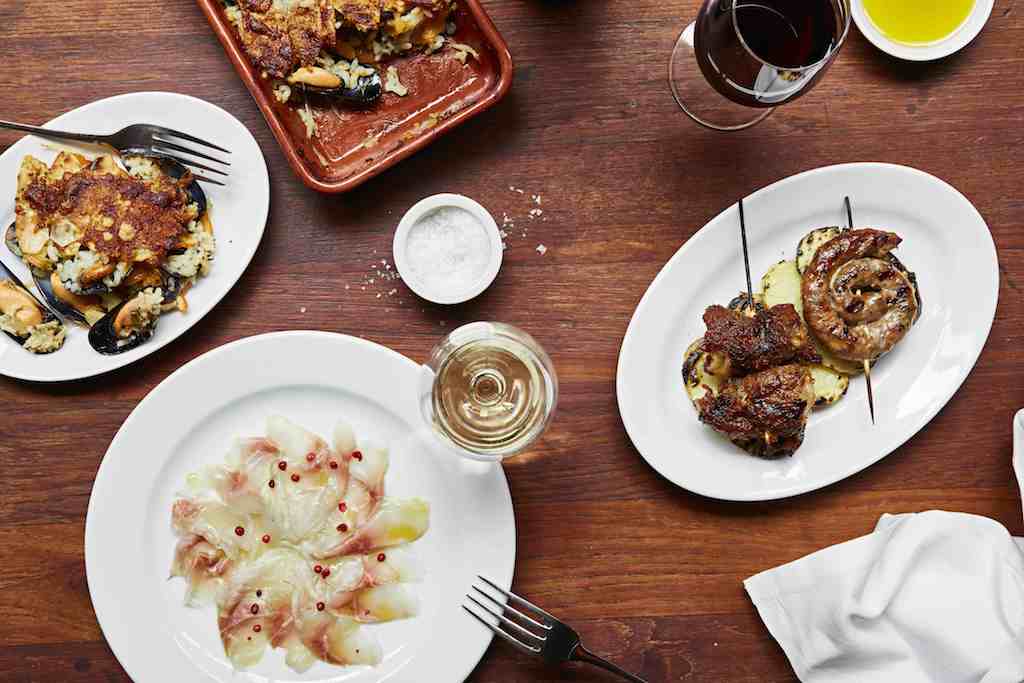 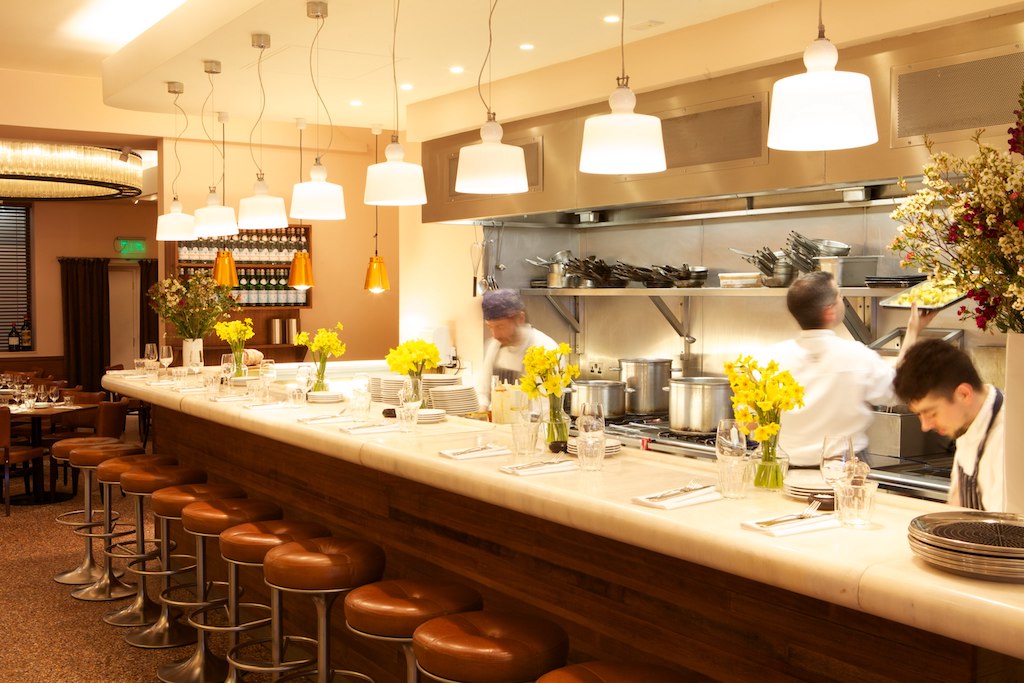 “When we can do nothing else, we can drink,” says Jacob Kenedy of the art-rich, pink and putty-coloured Soho staple specialising in “the obscure and the delicious highlights of food and wine from all across Italy's 20 regions.”

“We’re the same restaurant as when we opened, though the wine list has evolved,” says chef, writer and restaurateur, Jacob Kenedy of Soho staple, Bocca di Lupo, which he runs with fellow Moro alumnus, Victor Hugo.

Built to be “timeless”, beyond the signature brick lettering of the frontage the restaurant stars art by Kenedy’s mother, Haide Becker, including a slender pipefish beside the Turkish marble kitchen counter, and a portrait of sister, Rachel against the flattering putty-coloured walls which “makes people shine.” Meanwhile, the dramatic terrazzo floor is modelled on one appearing in Don’t Look Now. “Film director, Nicolas Roeg was the father of one of my school friends,” notes Kenedy.

Of the re-designed wine list which, arranged seasonally, “showcases traditional winemaking values,” Kenedy, who “grew up in an edible garden,” has bravely “cut off the fat,” having re-tasted the entire selection with sommeliers, Phil and Michael.

Devised by Kenedy, expect “direct – and some might say gritty” regionally-attributable dishes which could include filleted anchovies beneath “a sea of green” of micro-chopped parsley and garlic, “which I discovered in a Genoese wine bar.” This partners well with the example of smoky, rich, rediscovered Timorasso (La Colombera). Also worth trying for its masterful simplicity is the whole round lettuce, “served with its bum cut off” to allow leaves to fall away, and dressed with lemon. Follow on with stewed tripe with Pecorino and tomato, the latter of which Kenedy notes, “is a bitch to pair wine with even though everyone talks of artichokes being bad.” A sure-footed vinous collaborator with this is the rested, depthful, gripping Montepulciano d’Abruzzo Riserva from Praesidium, or Barbera Ottone San Silvestro. Culminate with the colourful Sicilian cassata cake with a duo of white and barrel-aged San Leonardo grappas.

Note, incidentally, the BYO truffle menu, perhaps including tagliolini al limone, or roast partridge with polenta and bagna cauda, for which you can either supply your own black or white diamonds of the earth or purchase them from the Gelupo gelateria opposite, which is also in Kenedy’s ownership.

Kenedy purposely avoided rolling out the Bocca di Lupo brand, “because I love this restaurant and didn’t want to spoil it.” He describes it as being, “from the heart” and indeed, “it’s rare we get a table where everyone is new to us… A table is made by the people at it.”

“For better and worse, I have I think never worked so hard,” says Jacob Kenedy of the lockdown, and the continuing Bocca di Lupo at home service which he hopes will become “a serious resource for people buying Italian wines in the future” with or without food, including “specific pairing suggestions.”

Kenedy is also a publican, running Islington’s Plaquemine Lock pub, rich in Bourbons and beers, such as Cosmic Warrior pale ale, wine, including Weingut Nelles Spätburgunder and Benedictine. “I went from being a wino to drinking too much beer with the jazzed-up Cajun/Creole dishes which brings great cheer…”

‘I am delighted the condemned man can enjoy his last meal, and so whilst the world teeters to neofascism and conflict and xenophobia, when we can do nothing else, we can drink,’ says restaurateur, Jacob Kenedy, a key supporter, with fellow Moro alumnus, Victor Hugo, of the band of small importers who help “bring new discoveries to our tables and to our mouths.”

At Soho’s Bocca di Lupo, plucky Kenedy (son of LA-born artist, Haidee Becker) tries his ‘damnedest’ to dispense fare which provides momentary transport to ‘some corner of Italy,’ although he admits to being doomed to fail in some measure. ‘Food and wine only make real sense when consumed under the sun that nurtured them,” he says. Hence, on recent travels around Italy, Kenedy was rewarded with “revelations” such as, “an Erbaluce (Orsolani) in Piedmont, with some acchiughe al verde (anchovies in parsley, also a revelation, and also now on the menu), an ice-cold Rossese di Dolceacqua (Terre Bianche) at Cantine Matteotti, Genoa (which was already on the list, and is now in the fridge), and every single wine Collemattoni make in Brunello (hot damn!)’

Both Kenedy’s often celebrity guests and eccentric team (I was once served by a part-time Burlesque dancer) has, he says, collectively decided light-to-medium-bodied, peppery reds are “the answer” alongside small plates to share. “And they aren’t wrong. From said Rossesse, to Schippettino and Etna Rosso: anything vaguely Pinot Noir in style does seem to go rather wonderfully with almost any food that isn’t mostly tomatoes. And with gelato – or anything frozen, which deadens most pud wines – effervescent Moscato d’Asti is the way to go – or a fine Umeshu if you’re daring…”

Towards the end of 2018, Kenedy and his sommeliers, Phill Morgan and Michael Perrucire, tasted the whole list with viciously critical eyes. “The result is more focus, more wines by the glass, a clearer layout, and a list almost halved to 150 bins. It feels (I hope) like what I always meant it to be – sometimes it takes effort to stand back and view in perspective.”

Kenedy describes himself as having moved, vinously, from being an enthusiastic amateur to amateur enthusiast. “I think I still like the same things but have come to know more of them. I also begun discovering regions I never understood before, and at home drink lots of Oregon Pinots, and German and Portuguese bottles. Also, through opening the Plaquemine Lock pub, I went from being a wino to drinking too much beer, which brings great cheer.”

What makes Kenedy sad, I ask? “Import duty and VAT,” he answers, conscious of the incredulity that VAT represents tax on tax. He also takes aim at some winemakers of natural wine. “I am really, really annoyed that natural and biodynamic, whilst emblems wonderful for the environment and championed by great makers, have become also a camouflage for bad winemaking, and that I fear tastes are resultantly sometimes miseducated to exalt sour grapes…”

Born in a frightful vintage for wine (1980), Jacob Kenedy trained at Clerkenwell’s Moro, contributing to the bestselling eponymous cookbooks, and Nancy Oakes’ Boulevard Restaurant in San Francisco.  In London, he opened Bocca di Lupo in 2008 with fellow Moro alumnus, Victor Hugo, followed by ‘Gelupo’, which, he promises, offers ‘the best gelato this side of the Alps’ in the same street, and, in 2017, the Islington pub, ‘Plaquemine Lock’, specialising in Cajun and Creole dishes.

‘Bocca di Lupo celebrates the regionality of Italian food and wine, specialising in obscure dishes, local winemaking styles and grapes,’ says Kenedy. Of the 220 bin list, Kenedy considers it important that, to sate the range of cravings which might arise, he would be happy to drink each of the selections at home. Fortunately, guests seem to agree with what they are prescribed in the bibulous sense. ‘Our customers have always been educated, adventurous, and Italophile – and grow more so, year-on-year. The demographic which passes through my door is turned on to once obscure regions, such as Etna, Le Marche, Puglia, Campania and the Alto Adige…’

Provenance of dishes, ideally savoured at the long Carrara marble counter in view of the grill, is marked on menus, and may include buffalo mozzarella bocconcini (Rome), sea bream Carpaccio with orange and rosemary (Veneto), spaghettini with sea urchin, butter and lemon (Puglia), and roast suckling pig with fennel, wine and bay (Emilia), ideally followed by a caffè alla nocciola (Neapolitan coffee with egg yolks and hazelnut) and then several scoops from Gelupo.

Incidentally, Kenedy used wine as a protest in 2013 when smashing five bottles from supplier, Fulvio Bressan in front of the restaurant to indicate his disgust at Bressan’s use of the epithet, ‘sporca scimmia nera’ about Italy’s recently appointed minister for integration, Cécile Kyenge.

Jacob Kenedy and Victor Hugo’s smart, art-festooned eatery celebrates, in their own words, ‘the obscure and the delicious highlights of food and wine from across Italy’s 20 regions’. The broad and sweeping tour of the wines of Italy offers plenty of choice, including at least 25 by the glass, including a quartet of fine wines, such as Barbaresco Rabja (Luisini). At the very top end, there are intriguing magnums, including Barolo Monfortino Riserva Giacomo Conterno, which sees a relatively modest mark-up applied. The size and breadth of the food menu, including home-cured beef, home-salted cod, and the perhaps more polarising, but no doubt authentic, milk-fed lamb’s intestines braised with tomato, deserves an in-depth look at Italy, and that’s exactly what we have here. A list that rewards repeated visits, either positioned at the gorgeous marble counter for ringside culinary action, or at a table deeper inside the venue. Also check out sister restaurant Vico, a Southern-Italian themed trattoria.