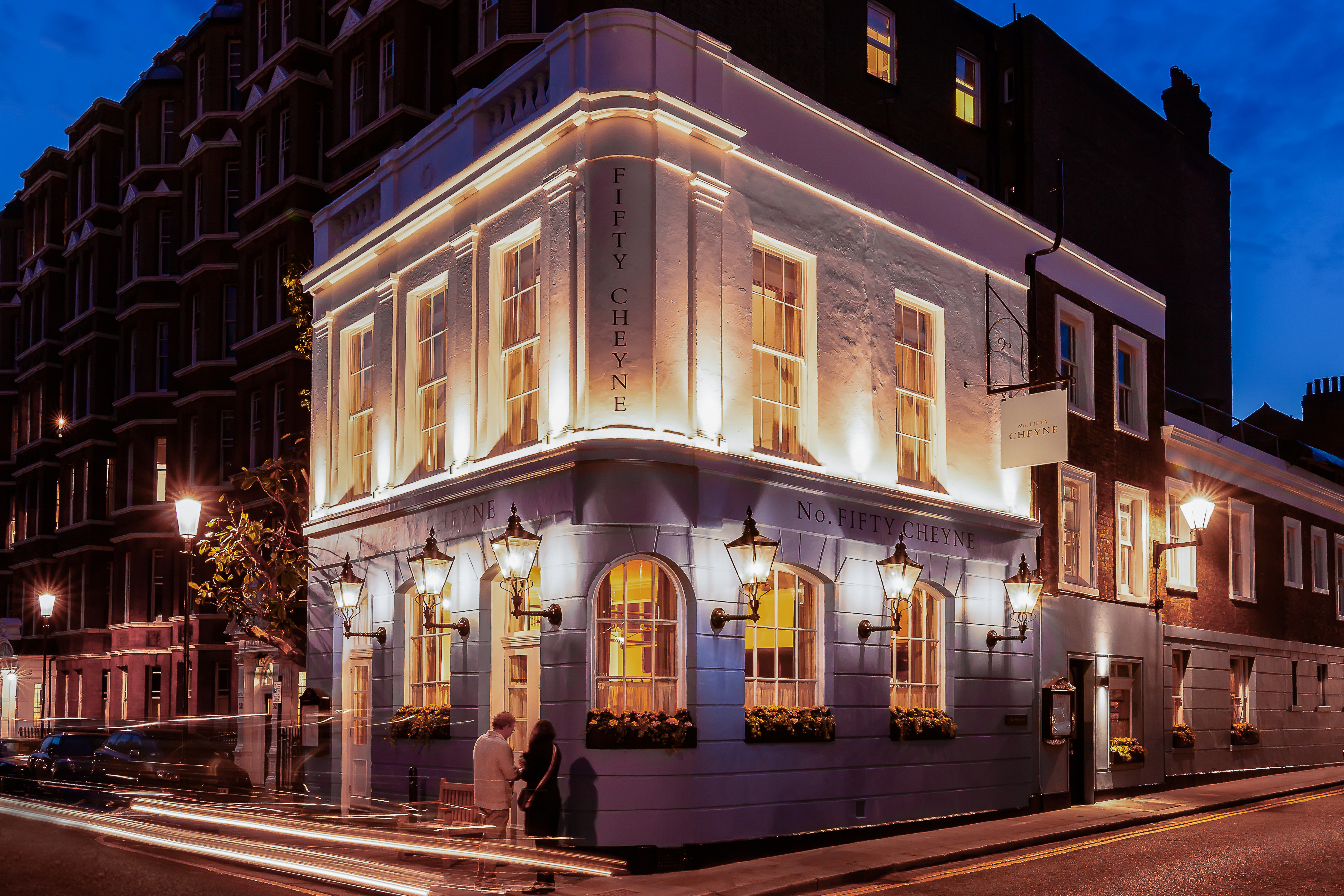 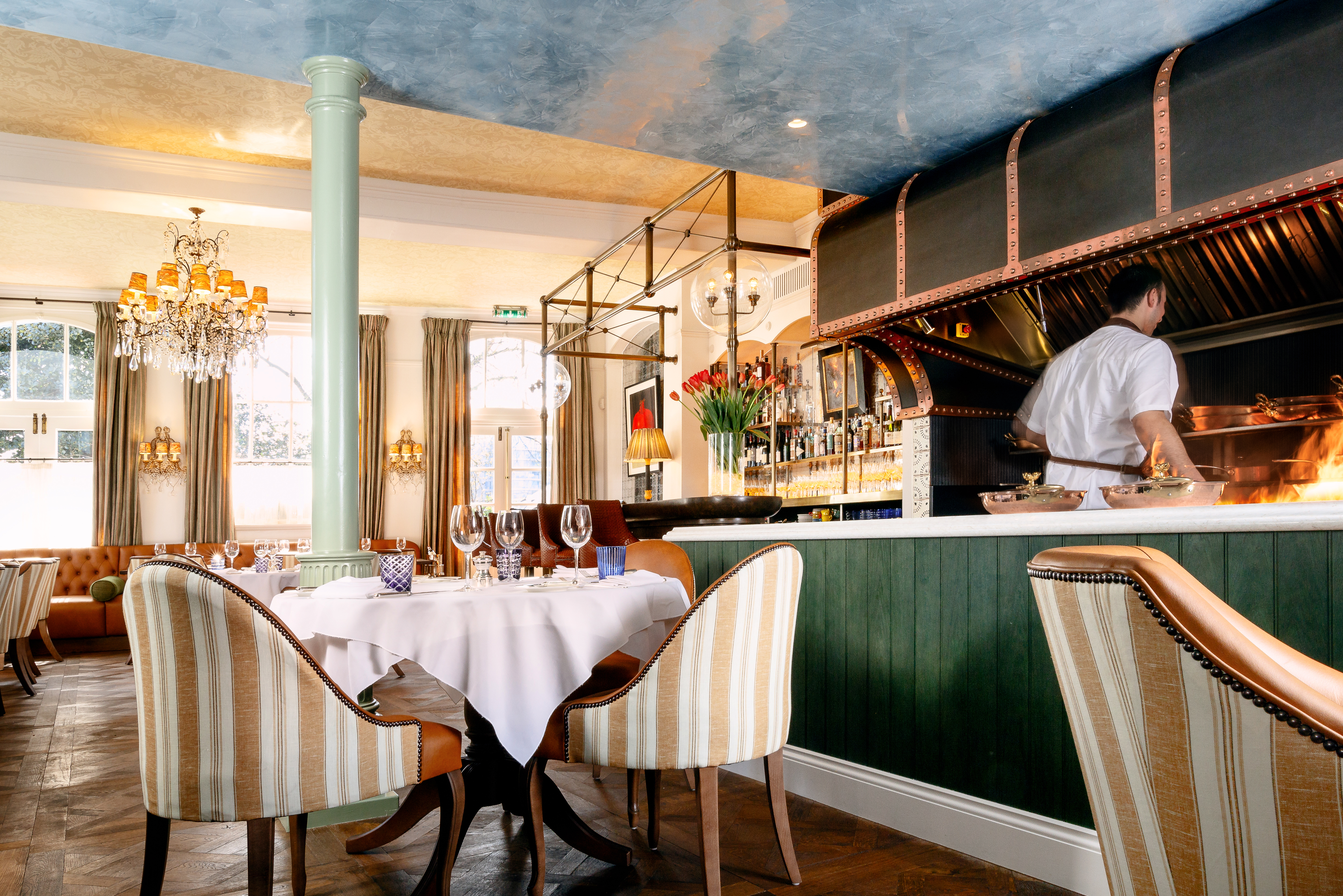 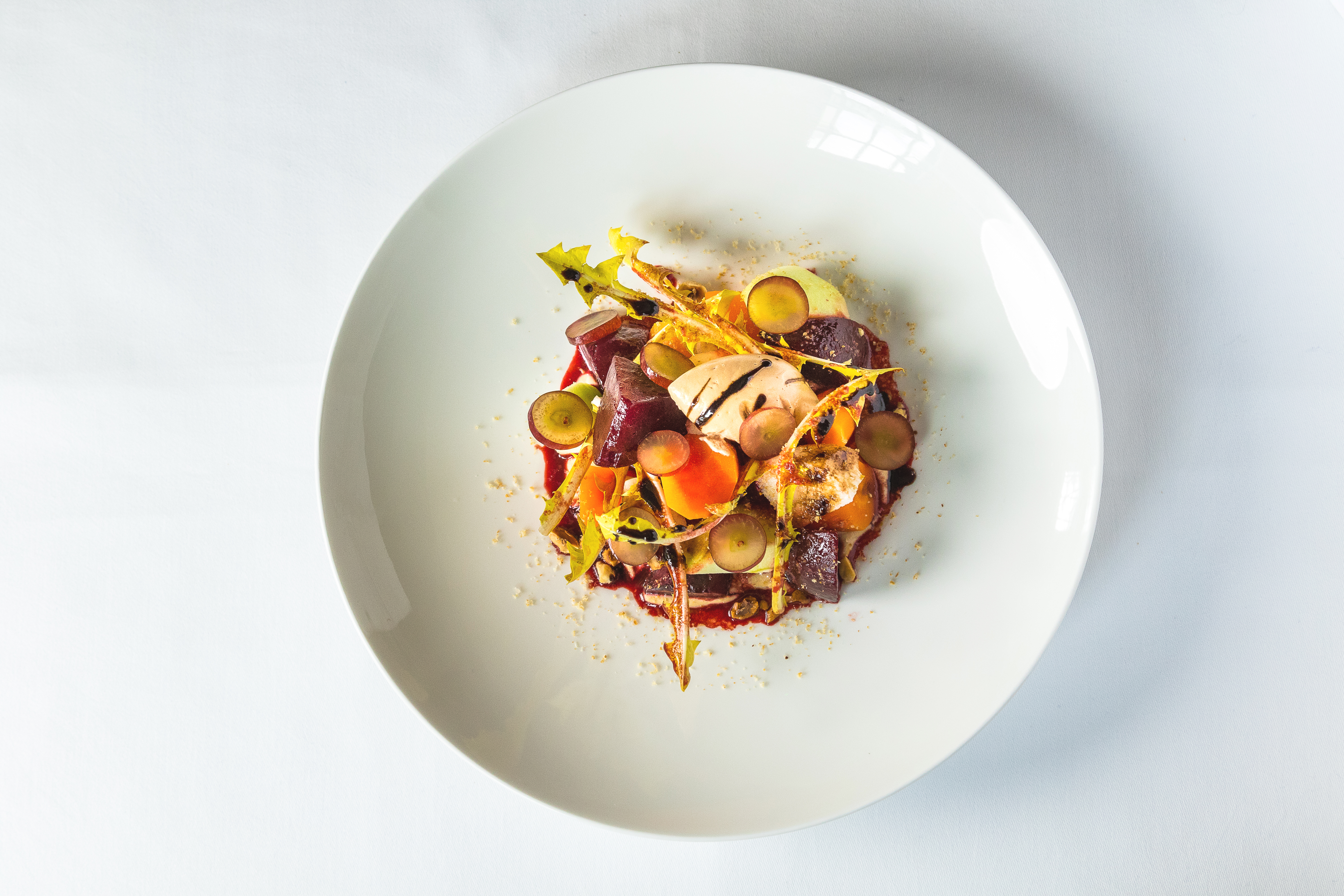 Reimagined and revived, No. Fifty Chelsea offers a riverside haven for a long lunch for wine lovers mindful of value as well as cocktail aficionados.

While Nantes-born maître d’, Benoit Auenau remains from the previous incarnation and doesn’t appear to age, Cheyne Walk Brasserie has reopened as No. Fifty Cheyne after far more than a skin-deep rebrand. The dining rooms and bars reaching across the bones of two long-gone pubs, The Kings Head and Eight Bells, have been beautifully rejuvenated with soft banquettes at the right height and handpainted lampshades evoking bookbinding paper. Those inns once “captured the trade of eighteenth-century seamen when the Thames was wider and busier,” says likeable food and beverage director, Peter Horton, who was GM of The Dorchester’s China Tang for seven years, making many memories with the late, brilliantly abrasive, Sir David Tang.

Entrepreneur owner, Sally Greene lives in the vicinity, and is also founder-director of the Old Vic Theatre and proprietor of The Criterion, Queen Skate Dine Bowl and Ronnie Scott’s – which puts together the vitalising playlist here on the riverfront.

After good bread from Hedone, expect reassuring, memorable dishes with clear focus from the kitchen and slightly relocated grill (housed under an almost steamer trunk like awning) of Iain Smith, previously of Jason Atherton’s Social Eating House, Berner’s Tavern and Sosharu, as well as The Square and The Goring. “Vol-au-vents are back,” says Horton of the redux pastries of snail, black pudding and parsley, well matched with bold, buttery Truchard Californian Chardonnay (though the first Truchard winery was actually founded in Texas). On my visit, the meat suppliers were also dining, audibly pleased with Smith’s treatment of their Herdwick lamb rump with celeriac, pistachio pesto and hotpot, and cob chicken breast and croquette with wild mushrooms and parsley. “If two cows don’t get along, they put them in different fields,” notes Horton. Fish doesn’t flounder, either, with halibut, baby turnip, potato straw, and an albeit face for radio roast chicken broth working in tune with a carafe of Gevrey-Chambertin (Combe d’Or) and side of chips with apparently aged beef fat.

Horton’s main list doesn’t exceed £100 a bottle for still wines. He is still allowing Prosecco, “albeit zero-dosage Folador,” although Charles Heidsieck Champagne is also available by the glass, and Dom Pérignon in magnum comes close to retail price. “And I’ve gone to fine wine suppliers for the Library List with reduced margins, for wines bought in smaller quantities which are meant to be drunk,” he says. There is much to like here, from rested Rhônes with a pedigree which would cost considerably more in the City, to good value first-growths. Prices across the board on both Library List and list proper are sane, given Horton understands the local clientele’s grasp of “the value of fine wine.”

Upstairs is “a great place for illicit affairs,” half-jokes Horton. The cosy drawing room and cocktail bar have views of the Thames, while a separate apartment with private dining options may be booked for naughty or nice liaisons.

Served on coasters depicting a winking version of the painter Turner, “saying bottoms up”, says Horton, cocktails are devised by smart of waistcoat, Max Barrington, formerly of one of Copenhagen’s most applauded bars, Brønnum. These may include a take on the Bloody Mary blended from homemade passata, Kew horseradish vodka, English honey, jalapeño, shallot, black garlic, smoked salt and rosemary. Meanwhile, guests who order the Pavilion Sour, homage to the Chelsea Flower Show, receive a Roja Dove perfumed handkerchief as a memento. A whisky-pepped espresso martini, meanwhile, might work with the blissful crème brûlée. “Chelsea hasn’t got many cocktail bars,” says Horton, rightfully hopefully.

Horton is an impassioned believer in hospitality, believing there is nothing more satisfying than seeing a full restaurant of people enjoying themselves. “All you have to do is enjoy yourself and we will help that happen,” he says. “It doesn’t have to be complicated.” He also loves to see people “having long afternoon lunches.” Horton recalls the time he took Westminster Kingsway students to a taste-led tour of China Tang, telling one, who had never before tried a scallop, “if you work in this industry, you eat in this industry…”

Cheyne Walk Brasserie was reborn as No. Fifty Cheyne after a deep refurbishment. The dining rooms and clubby bar reach across the bones of two former inns, The Kings Head and Eight Bells which once captured the trade of eighteenth-century seamen when the Thames was wider and busier. It is owned by local, Sally Greene who is the founder-director of the Old Vic Theatre and proprietor of The Criterion, Queen Skate Dine Bowl and Ronnie Scott’s – which supplies the playlist.

Nantes-born maître d’, Benoit Auenau remains from the previous incarnation and doesn’t appear to age. “We were overwhelmed by how popular it quickly became, and, during the lockdown, had time to refine our service style and support our waiting staff with online WSET courses,” he says.

After bread from Hedone, expect reassuring, memorable plates emerging from the kitchen and the grill which is housed under a steamer trunk like awning. Previously of Jason Atherton’s Social Eating House, Berner’s Tavern and Sosharu, as well as The Square and The Goring, dishes by head chef, Iain Smith could include a starter of roast Orkney scallop with pea purée, confit fennel and Champagne sauce, then Herdwick lamb rump and confit belly with violet artichokes, roast garlic and broad bean croquette with minted jellies, perhaps with a side order of Tuscan olive oil creamed potatoes. Or opt for the grilled Dover sole.

The main wine list seldom peeks over £100 a bottle for still wines, including Listan Blanco from the Canary Islands, Grossett Clare Valley Riesling, and THALìA Etna Rosso. “We’ve been working closely with one of our favourite suppliers, Christophe Jeandeau at Battersea’s Champagne & Chateaux to refine our lists while making margins as slim as we can bear,” says Auenau. And to keep our entry prices as easy as possible, Aueneau added Prosecco including a clay-filtered version from the Delevingne sisters. And then there is the “Library List” with reduced margins. There is much to like here, including rested first-growths such as Haut-Brion, as well as Penfolds Grange, and, in magnum, Hermitage La Chapelle – all close to the retail price.

Upstairs is a cosy drawing room and cocktail bar with views of the Thames, with a separate apartment with private dining options. Cocktails are devised by Max Barrington, formerly of one of Copenhagen’s famous Brønnum bar. These may include a take on the Bloody Mary blended from homemade passata, Kew horseradish vodka,  honey, jalapeño, shallot, black garlic, smoked salt and rosemary. Meanwhile, guests who order the Pavilion Sour, an homage to the Chelsea Flower Show, receive a Roja Dove perfumed handkerchief as a memento.

During the lockdown, Auenau pivoted the business towards an off-premises offer of bottled cocktails and cook-at-home dishes. “I learnt how to ride a bike as a local-delivery courier,” he recalls.