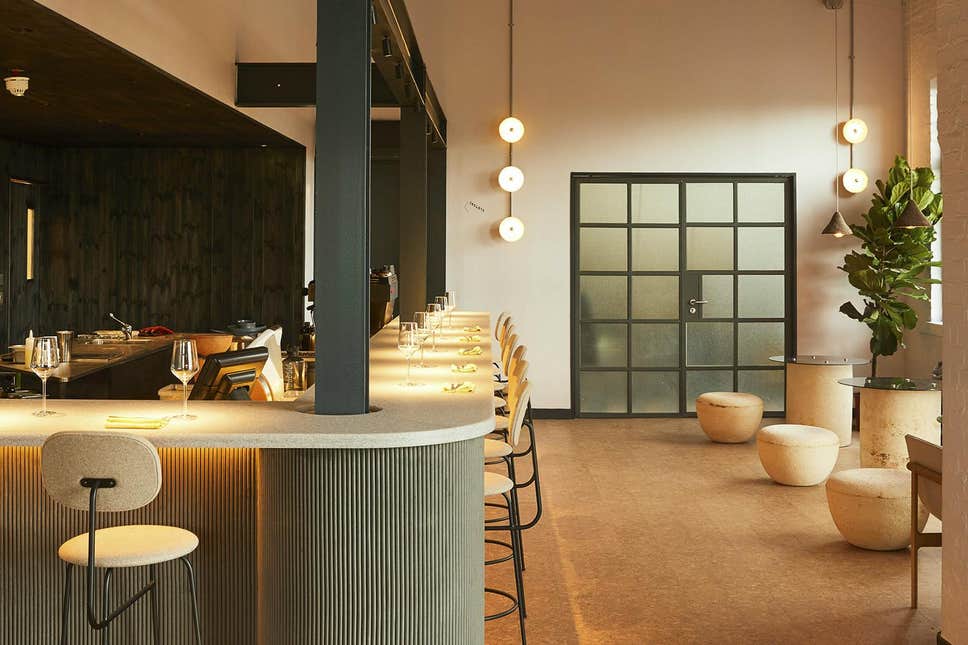 Aiming to deliver a primitive food system which doesn’t cost the earth, in so doing reducing food miles and boosting nutrients, the idea for Silo crystallised in Australia when artist, Joost Bakker proposed the idea of “not having a bin.” The restaurant opened in Brighton before moving to the albeit hard-to-find, classy loft above the Crate brewery overlooking the Queen Elizabeth Olympic Park.

Waste is most resourcefully banished hence food not consumed by guests or the team is quickly composted in an aerobic digester, while packaging, including wine boxes are immediately unpacked on arrival and sent back to the supplier. There is also an impressive on-site flour mill and butter churn. Menus are printed on paper formed from used single-use coffee cups and lampshades are created from bottles crushed on-site or textured mycelium grown on spent brewing grains from the brewery. The kitchen makes its own miso from sourdough at the fermentation station.

Venturesome guests should seek the advice of the cohesive front-of-house team when matching drinks with dishes served on plates beautifully upcycled from plastic bags on tables made of reconstituted food packaging. Smelskaya, who also lived in Sweden, proclaims cider is the new wine, hence the no added sugar cider from Devon’s Find and Foster, “who find and foster old orchards” may be paired with small plates and snacks including “Siloaf” and aged butter, Koji quavers and dip, and a soy egg with lava salt. Then, perhaps unfiltered, biodynamic rosé Rondo from Rye (Tillingham) with the “Hot 4 u” spring onion pancake, or grilled cuttlefish kebab with umami dipping sauce. With a dish from the original restaurant menu, poached artichoke and fermented “punched-up” kimchi-like artichoke, Smelskaya enjoyed prescribing a naturally sparkling Cahors Malbec poured from a bottle featuring come hither or stay clear cats eyes depending on your perception. (La Calmette Nycia Lope).

Expect significant attention devoted to orange wines, which, being “structured and versatile can go with the whole menu,” says Smelskaya. These range from light and “un-scary” to perhaps surprisingly popular, “full-on, ‘skinsy’ ones” including the rust-coloured Assyrtiko from a brother and sister team at Greece’s Domaine Ligas.

Smelskaya’s darling region is the Jura, and picks include the grappa-like Chardonnay, Macvin du Jura (Domaine de la Tournelle) which smells brutal but tastes smooth with an almond paste-like flavour spectrum which persists on the palate to the next day. It is best enjoyed overlooking the embers of the open kitchen with buttermilk dulce de leche and pumpkin seed ice cream.

Smelskaya, who, post the lockdown, has time to “do events and pop-ups here and there” also enjoys P. Franco’s “fun French ambience and art – they have nice wines and know my taste.” Over time, expect plans for a weekend market outside Silo.