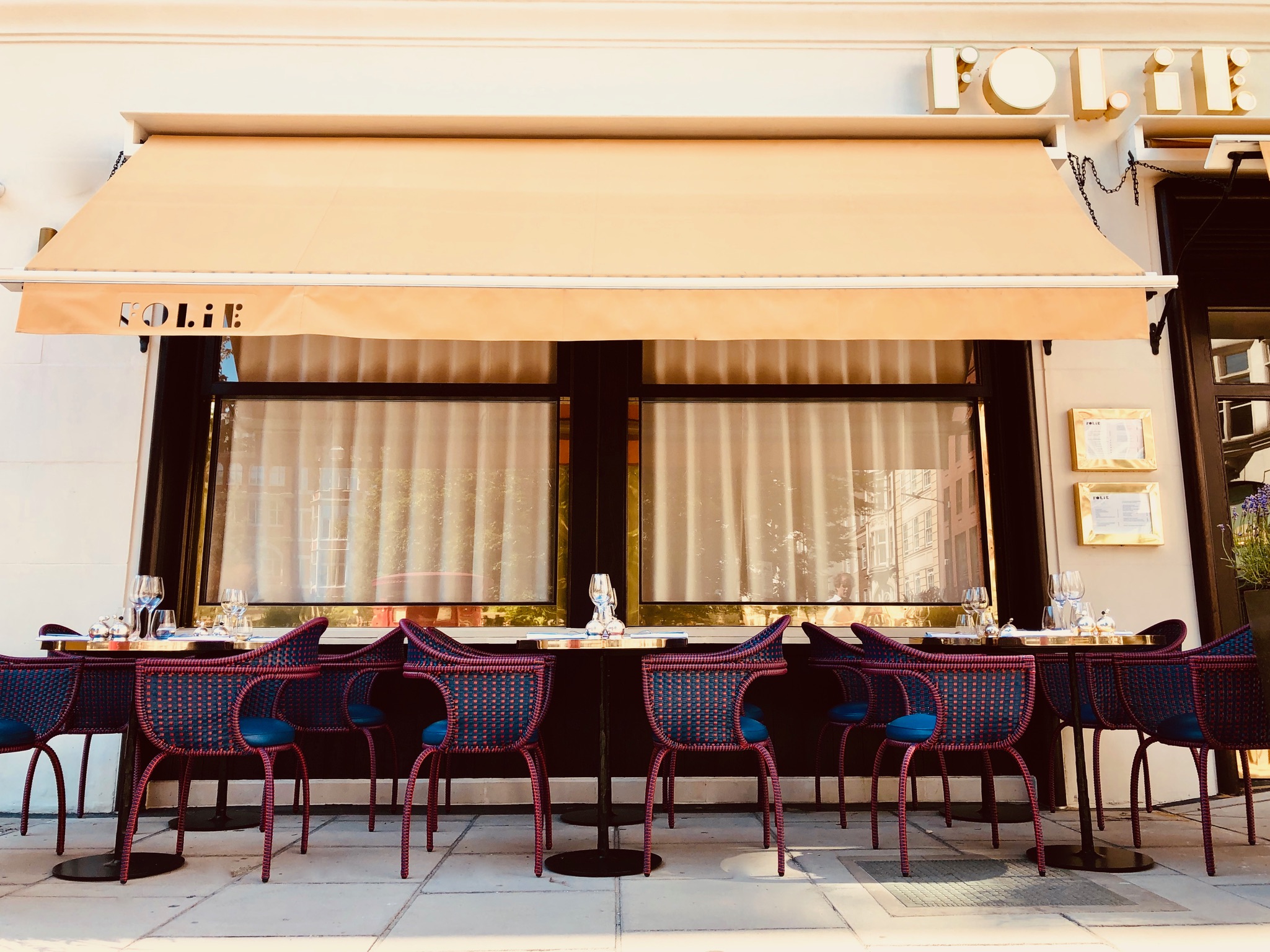 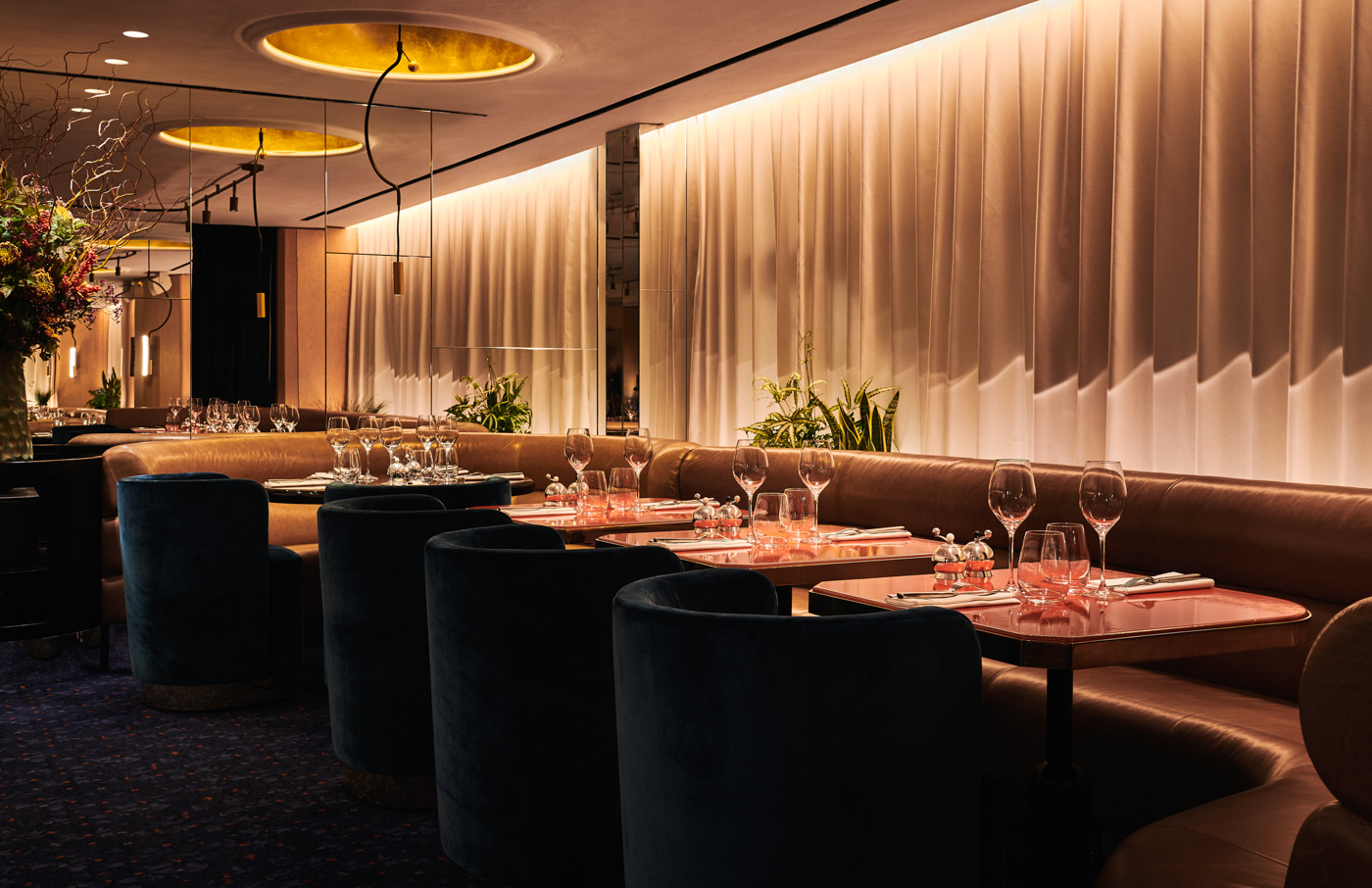 Diagonal to Bob Bob Ricard on the Soho/Mayfair confluence that is Golden Square, and encompassing a former Gregg’s and part of a Pizza Express, Folie came to life to capture the glamour of the French Riviera. The first solo project from Guillaume Depoix, former operations manager of Boundary, Shoreditch and GM of Casa Cruz opened the same week as his child was born. Depoix’s vision for a workably retro, brassy, carefully lit brasserie with curved corners and particularly good acoustics (to help keep the conversation alive alongside night-time sets from the Parisian DJ) is realised by Studio KO, whose work includes Musée Yves Saint Laurent, Marrakech and London’s Chiltern Firehouse. Only the slightly cruise ship pattern carpet lets the otherwise considered scheme down.

Harry Ballmann, who is the holder of two degrees on normative democracy and legislative aspects of the EU, admitted to being surprised by “how bling the project turned out to be.” The couth chap came from Wilton’s to take up his first head sommelier role and clearly relished forming the identity of the wine list which has fast doubled and then some from the initial brief of 100 bins. Mirroring the clientele, 75% of bins are French, with a specialisation on Provence with rosé by the region’s only black winemaker, Donae Burston, the Riviera and the Mediterranean including Bandol, with Chateau Montus back to 1994, and Cassis, with remaining bottles being a celebration of the “best of the rest” including Assyrtiko from the increasingly listed T-Oinos. Ballmann mentioned he originally wrote, using the usefully slim Folie font, producer first on his list, “which didn’t work in Soho,” hence listings now open with emboldened regions.

With flavoursome but not always conventionally attractive dishes by Christophe Marleix (ex Annabel’s and The Dorchester), Ballmann favoured the slight abrasion of Southern, skin contact Torracia Vermentino from high above Porto Vecchio with a starter of shaved raw artichoke and a hidden soft-boiled egg. And, when asked to be brave with the match, he selected perky, juicy, ever-so-slightly frothy “Roussillon Nouveau” in the form of the frisky Syrah-led “Octobre” (des Foulards) with squid and celeriac carbonara. Finally, with the fruity Folie “chichi” doughnut, Ballmann chose high-altitude Muscat from the opposite end of Corsica (Pieretti), “which we’d have referred to as a sticky at Wilton’s!”

Ballman is also evangelical about Beaujolais, personally preferring it to Burgundy, listing more than half a dozen examples including white incarnation.

During the lockdown, Folie was one of the first of the new-wave of London restaurants to join Deliveroo, also supplying the serviced apartments above the restaurant, with a juicy discount for wine. Of the downtime, Ballmann says, “it’s been nice to have a few months to recuperate, though for some it’s difficult to get back”.

Leaving Folie in good shape, after working the harvest at England’s Langham winery, Ballmann continues to run “Blind Taste” with co-founder, Beatrice Morris. Via strikingly wrapped single bottles and indeed flights of not only wine but gin, whisky and agave, customers are challenged to a game of deduction – and for this reviewer, attempts at identifying a pre-phylloxera Bordeaux bottled in a Burgundy bottle proved fruitless! And over time, expect Blind Taste to turn into an “experiential wine bar,” says Ballmann, who plans to start his own import business to feed Blind Taste.