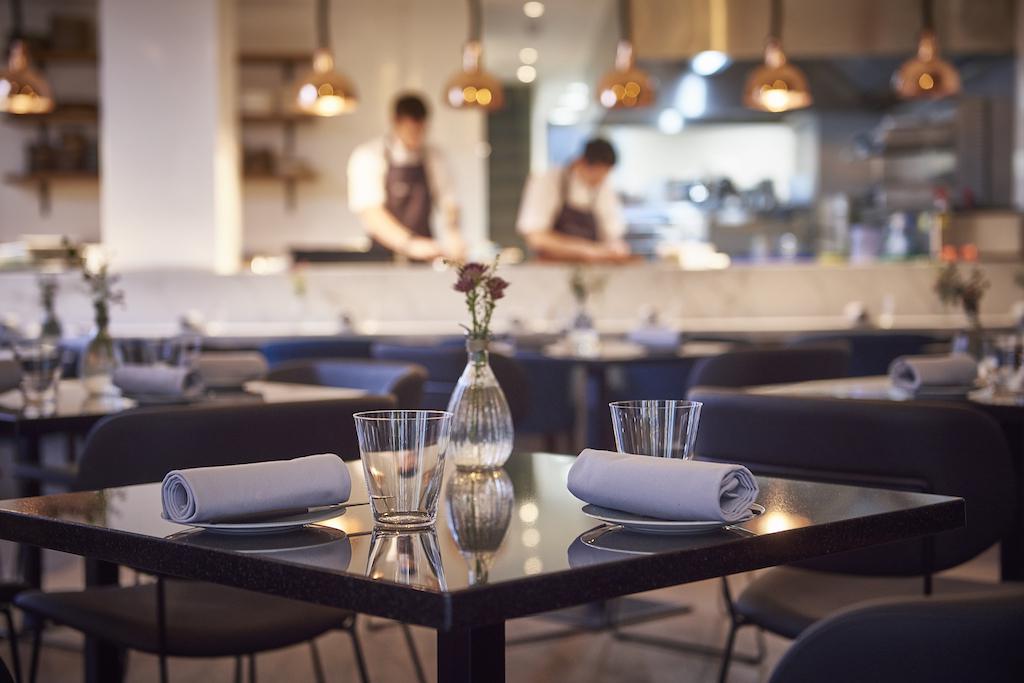 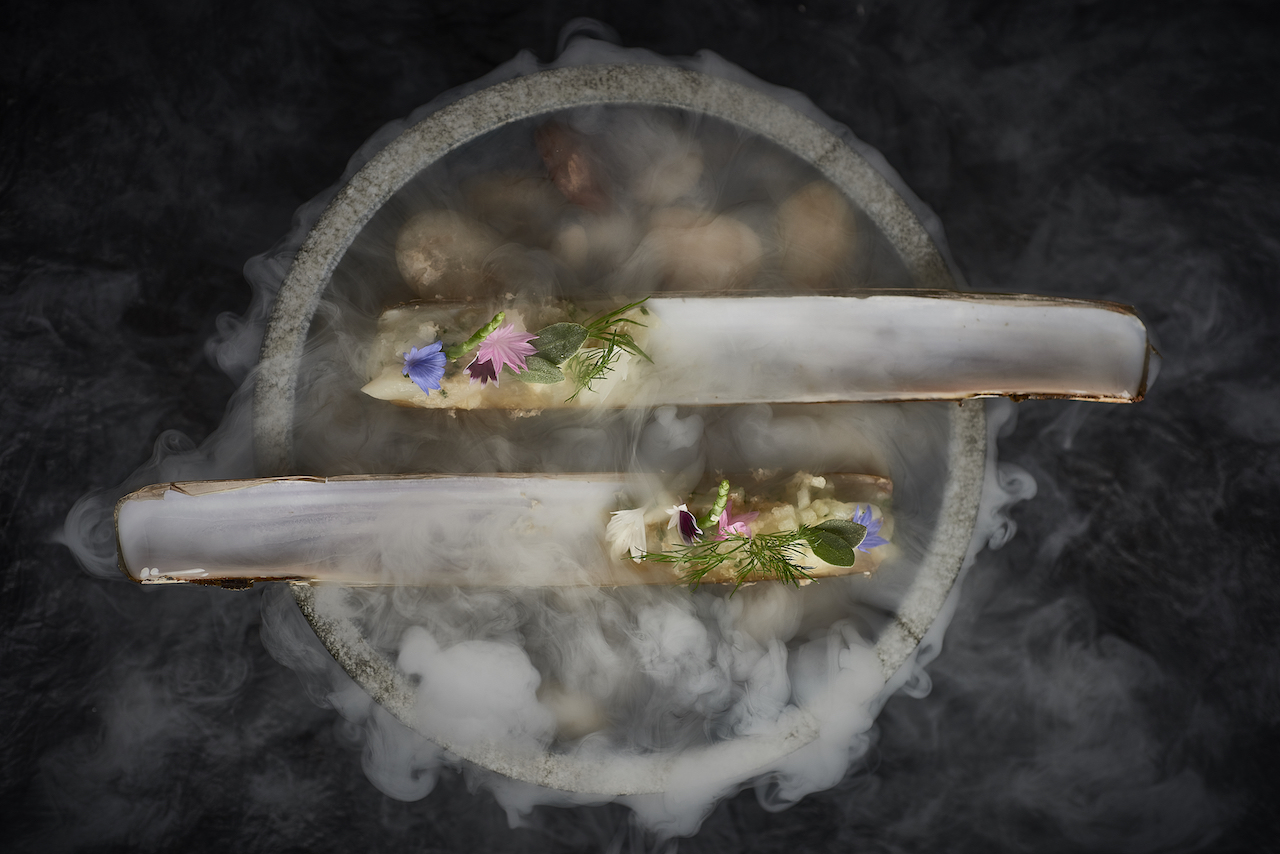 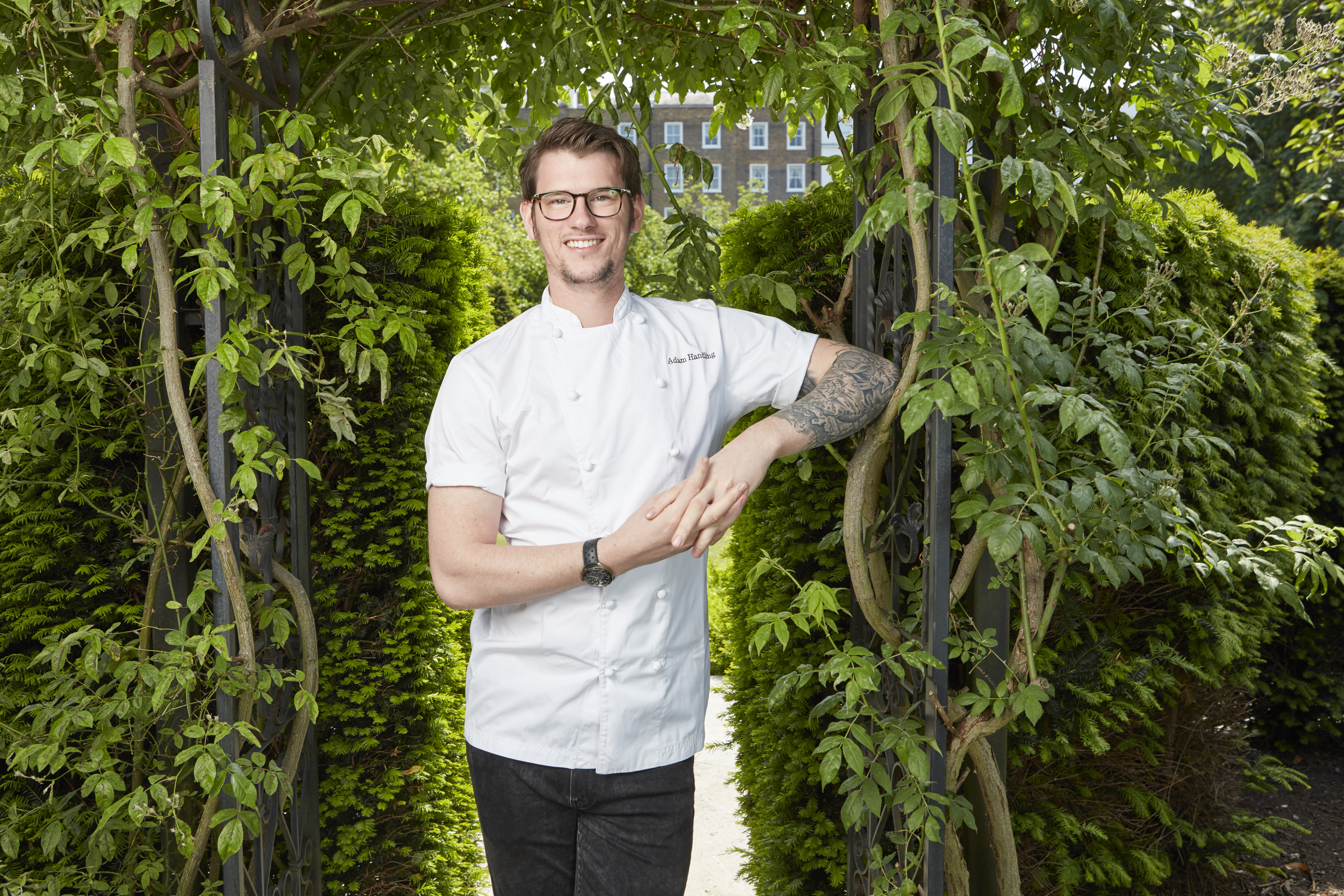 Wines at their perfect temperature
Dinner by a Masterchef finalist
An exciting, worldly list
Cocktails at the Eve Bar
Sake

With a new entrance, the venue still features a chef’s wall signed by visiting chefs and the odd restaurant critic, and beside the open kitchen, a long marble counter with decorative ferns selected and tended by the green-fingered McCabe. The art by Scottish artist JJ Adams is often large, shiny and provocative, including a dystopian graffitied Buckingham Palace, as well as different epochs of Piccadilly Circus – the latter image also appears on the labels of English sparkler Ambriel. This was finished with a specific dosage for the restaurant, and is also available in thirst-slaking cocktails on the St. Germain- sponsored terrace. You can also order zero-waste dishes here, picking up the concept of Handling’s Ugly Butterfly (RIP).

Composed of categories such as “esoteric – unusual and lesser-known varietals and regions”, “celestial – wines of organic and biodynamic principles”, “reflections – a homage to classic varietals in newer places”, “mavericks – producers who made a difference and dare to be different” and “no skool like the old skool – fine, rare and vintage”, McCabe’s non-discriminating list, poured in Nude Ion glassware, celebrates huge swathes of the vine-planted globe.

Formerly of Roka, where he “could list anything, there being no walls with Japanese cuisine”, Zuma, emblematic “for unicorn wines”, and Gilgamesh, which he helped open with Ian Pengelley, McCabe manages to shoehorn a substantial vinous collection into an eclectic collection of Eurocaves mushrooming under the Covent Garden pavement beside Handling’s revamped Eve Bar, which is home to display ladders of spirits and its own lab.

From the must-have tasting menu, a comforting bowl of enormously flavoursome turbot, mussels and butter leaf find compatibility with dry Jurançon in the form of freshly-squeezed lime and pineapple-scented biodynamic Meteore (Clos Larrouyat). Scottish lobster transformatively bathed in wagyu juices is a masterly signature dish, matched with Between Five Bells Chardonnay from Ray Nadeson’s Lethbridge label. Modestly titled, chicken and chips actually refers to a very “cheffy” tender breast cossetted in haggis meat with meticulously puffed pommes soufflés. This could be paired with arguably the inkiest, most meaningful Beaujolais ever produced (Domaine de Fa Beaujolais en Besset). And with a pre-dessert of cheese, apple and meadowsweet, a méthode ancestrale Gaillac brings a deluge of texture (Château de Rhodes).

But don’t mention the term “natural wine” to McCabe, incidentally, who believes grape ferment can only be natural if the grapes fall to the floor of their own accord and spontaneously ferment. Instead, he prefers the description, “minimal” for low-intervention wines.

When not here or at Adam Handling at Chelsea’s Cadogan, McCabe also authors the wine list for the bijou Lyon’s Seafood & Wine Bar in Crouch End, where miso-marinated fish collar might float your boat, alongside Grenache from Migliarina Wines, Wellington.

Adam Handling’s Covent Garden flagship Frog boasts an exhilarating, democratic, innovatively compiled list. “I was going to take a month off after working at Yauatcha, then saw Adam’s menu and thought ‘this is scary, outside my comfort zone, and what I need’,” says group head sommelier Kelvin McCabe, who created a gripping list at Adam Handling’s central London restaurant.

The venue features a chef’s wall signed by luminaries including chef Pierre Koffmann and critic Richard Vines, a long marble pass doubling as a counter with seats, ivy-garlanded pillars, and large, shiny artwork by mixed-media artist JJ Adams, showing different epochs of Piccadilly Circus. This image also features on the labels of English sparkler Ambriel, which is finished with a specific dosage for the restaurant.

Composed of categories such as ‘esoteric – unusual and lesser-known varietals and regions’, ‘celestial – wines of organic and biodynamic principles’, ‘reflections – a homage to classic varietals and regions in newer places’, ‘mavericks – producers who made a difference and dare to be different’ and ‘no skool like the old skool – fine, rare and vintage’, McCabe’s impeccable, non-discriminating list has massive personality, celebrating huge swathes of the globe.

Formerly of Roka, where he “could list anything, there being no walls with Japanese cuisine”, Zuma “for unicorn wines”, and Gilgamesh, which he helped open with Ian Pengelley, McCabe manages to shoehorn a substantial vinous collection into an eclectic collection of Eurocaves mushrooming in the dining room, with more stock held in arches under the pavement beside Handling’s Eve Bar, home to a fine antique Negroni.

From the tasting menu, signature celeriac, date, apple and truffle is a dish Handling created for his mother on his opening night when she announced she had turned vegetarian. This may be partnered with Brézème Blanc (Domaine Lombard), a Marsanne-forward Northern Rhône that McCabe calls “an icon, close in style to Hermitage Blanc”. This shouldn’t be served cold, notes McCabe, whose biggest gripe, after people standing on the left of Tube escalators, is encountering wine at an inappropriate temperature. Bright, silky Kovács Nimród Monopole Blues Kékfrankos could accompany mushroom agnolotti, bone marrow and black garlic – the definition of umami.

When not here, The Frog in Hoxton, or newly opened Adam Handling at Chelsea’s Cadogan Hotel, you are likely to find McCabe draining a bowl of ramen on a backstreet.

Adam Handling’s second restaurant to be named after the tail-free, largely carniverous amphibian (his first post St. Ermin’s Hotel is at the Old Truman Brewery) is located on Southampton Street, a hop from the former home of the inventor of the fire extinguisher…

One of London’s more imaginatively composed wine lists, the narrative of ‘Wines and Other Stories’ opens with a mission statement to deliver ‘a sublime customer experience’ and culminates with a quote from Oscar Wilde’s The Critic as Artist – ‘Yes: I am a dreamer. For a dreamer is one who can only find his way by moonlight, and his punishment is that he sees the dawn before the rest of the world…’

References to these words and the restaurant’s name appear in wines, such as Sugrue Pierre’s epic English fizz, ‘The Trouble with Dreams’, drawn from ‘Effervescence’, one of a dozen headings – as well as ‘Bionic Frog’ Syrah from Walla Walla, which, along with Joseph Phelps’ Insignia, Château Grillet, a suspiciously elderly Sancerre, and, for the price of the average domestic kitchen, a jeroboam of Petrus are categorised under ‘No Skool Like The Old Skool’, i.e. ‘fine, rare and vintage’.

‘We specialise in small producers making their mark,’ says sommelier, Shane McHugh, who, like chef Adam Handling, is devoted to their craft and clearly ambitious. Indeed, McHugh was Ireland’s representative for European Best Young Sommelier competition in 2017.

One way to foster discovery, the byword for this list, is, for those wishing to deplete a fattened piggy bank, to consider the by the glass selection of wines ‘normally only available by the bottle,’ including Jean-Louis Chave Hermitage and Haut-Brion.

Other sections include the fortunately not too frighteningly funky ‘Celestial’, ‘featuring wines of organic and biodynamic principles,’ says McHugh, including Le Soula Blanc and Pinot Noir from turf capital, Oregon, made by a winemaker actually allergic to grass (Johan Vineyards).

‘Quintessential’, meanwhile, is home to ‘quality classical and recognisable varietals and regions’, although it is perhaps a short debate whether oxidised white Rioja, Gravonia has become enough of a household name to warrant a mention here.  ‘Esoteric’ perhaps would be the better fit, therefore, celebrating the ‘unusual and lesser-known,’ including Txacoli and very likely unchartered by millennials, Hungarian Kékfrankos.

‘Reflections’ is ‘homage to classical varietals and regions in newer places’, including Seghesio’s Arneis and Andrew Will’s Two Blondes.

‘Producers who made a difference and dare to be different’ are categorised under ‘Mavericks’, including Crittenden’s Savagnin Zumma from Mornington Peninsula, and Rhône ranger, Tandem, sown in Morocco.

‘Dulcet tones’ is, of course, all about sweetly unctuous potions, and may include ‘Umelicious’ Umeshu from Hiroshima, as well as a Frizzante Frontignac/Gewurztraminer from Barossa’s Rude Mechanics – ‘Suck-It-And-See’.

‘We hand pick our wines based on accessibility, the quality of the winemaking, price (17 bottles cost fewer than £40) and most importantly, how our wines pair with Adam’s style of food,’ says McHugh. ‘We rotate our wine list as Adam rotates his menu. Seasonality is so important to our ethos.’

Tightly structured, attractive and saporous, dishes by Handling, a Scottish Young Chef of The Year and Masterchef finalist, are devoid of adjectives in their descriptions, and may not, apparently include frogs’ legs, but tartare of beef and tuna with kimchi, a rabbit toastie, or, from the vegetarian five course tasting menu, butternut agnolottie with trompettes and herbs instead, followed by an apple and pistacchio cheesecake.

Also note the ‘black and white’ cold pressed juice range by Handling, ‘made using handpicked and delicious fruit and vegetables that are slightly misshapen and so rejected by restaurants’, including ‘activated coconut, chargcoal, agave, lemon and lime.’

NB. No corkage charge on Mondays.