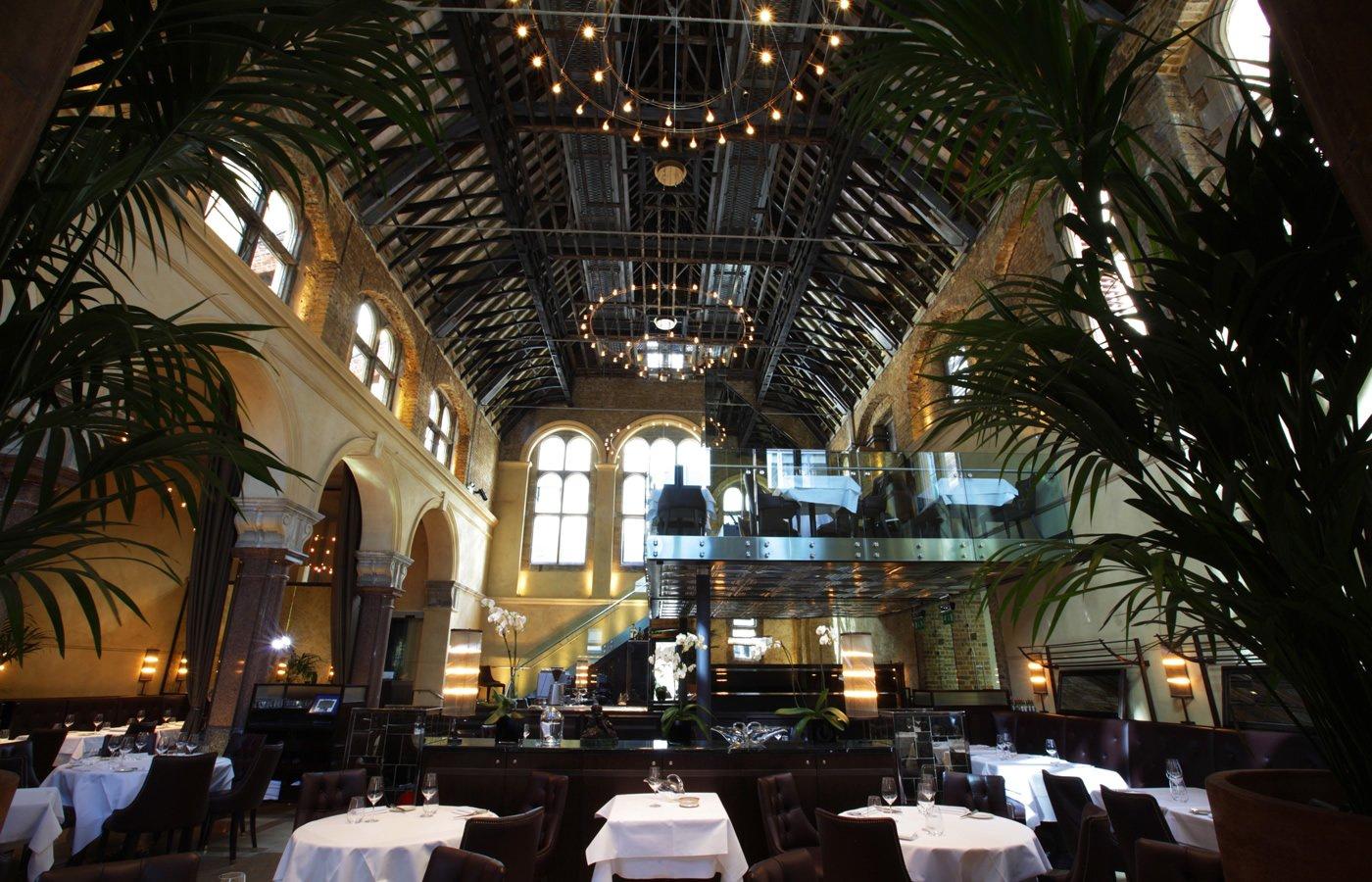 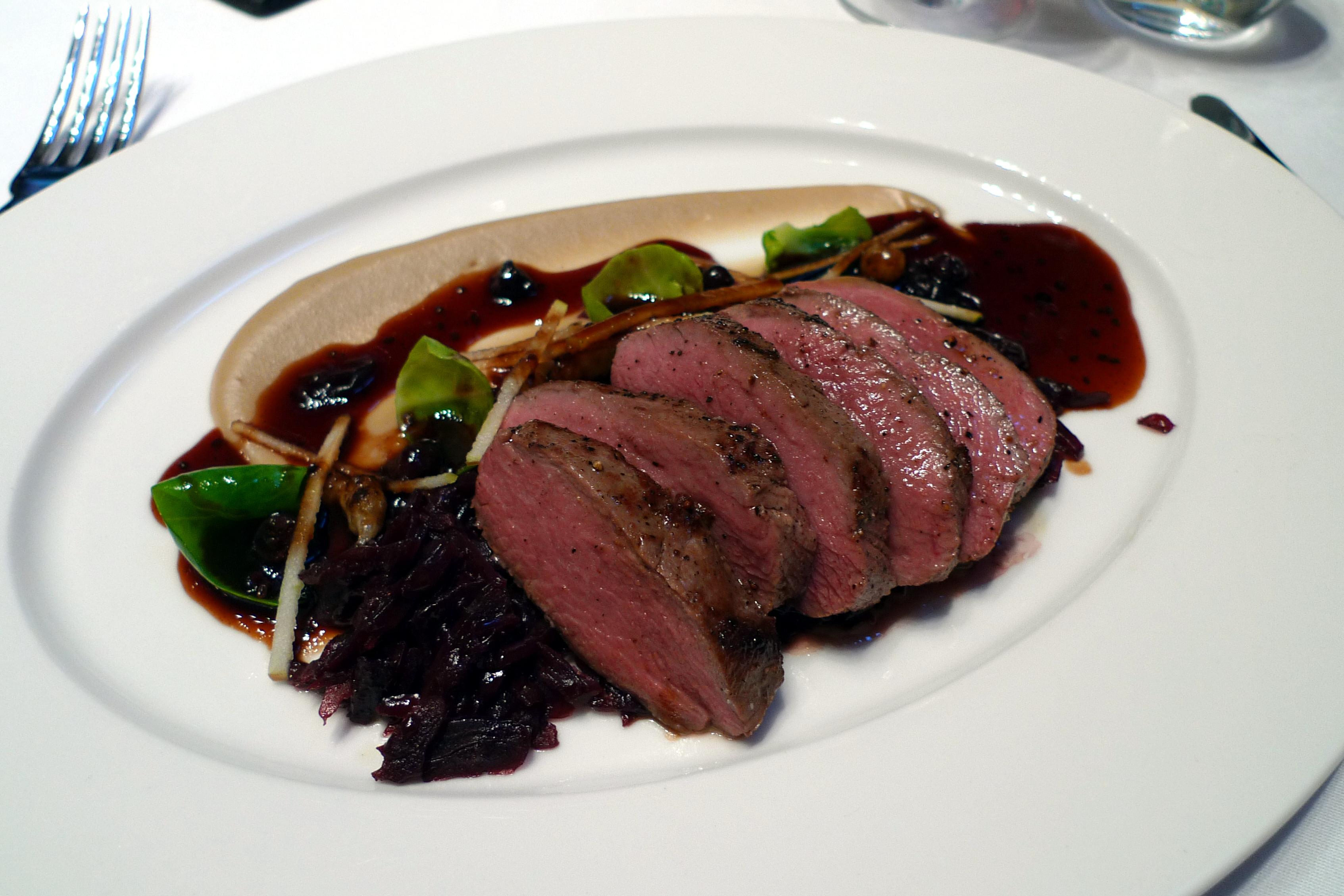 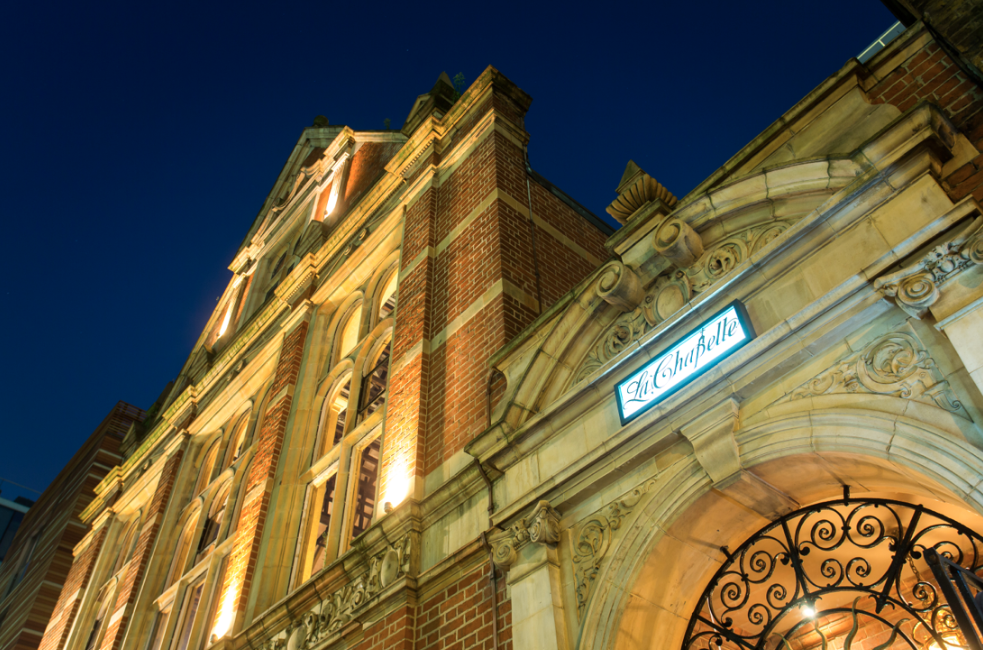 Come to the chapel-like former girls’ school, parish hall and gym for gastronomy and, should your budget stretch, exemplary wines from the northern Rhône.

Edinburgh-born, Stephen Nisbet worked at The Square, Pétrus, Green’s Oyster Bar and Aurora (Andaz) in London, and further afield, L’Ortolan, Lettonie and The Balmoral, “with a sojourn in Ulaan Baatar” from where his wife originates. He started at La Chapelle in summer 2018, “a hot year for English wine and Burgundy.”

Nisbet “got buckets done” during lockdown, adding a “Sommelier’s Selection” page to the landscape list, although he also went against convention at The Square, having devised an LP-like, square format. Featuring such choices as Horsmonden Sussex Brut and Basque Txacoli, this section serves as a testbed for new additions. “I get bored very easily and hope to use it to do the 10 Cases thing,” he says, referring to the Seven Dials bistrot.

Nisbet also added under-counter Eurocaves to the mezzanine during his tenure, bolstering the existing display cabinets dotted around the dining room. “Although our building looks like it has catacombs, the reality is there’s no corner free!”

Acknowledging Jeff Galvin’s vinous preference for the Northern Rhône, Nisbet looks after a prized vertical of Jaboulet’s Hermitage La Chapelle, from 1952 to 2006, including “the legendary 1961.” However, aside from such hallowed wines, Nisbet works hard to provide “good value bottles, increasingly from producers who farm sustainably,” believing, La Chapelle’s opulent surroundings, “elevates even the most honest wine.”

Nisbet’s devotion to gastronomy is apparent in the match with the dish of cod, cauliflower, raisin and pine nuts scented, “tandoor-like” with underlying “tingling sweet spices” and curry. “It may appear marmite initially, though, given air to subdue its tartness, Domaine Macle’s young Vin Jaune is astonishingly complex and rich alongside.” An alternative pairing is Gabrielskloof’s ripe, barrel-fermented Swartland Chenin Blanc – “just wonderful, with sweetness to back up the dish – you could do both glasses to see both sides.”

Nisbet enjoys working with the very much hands-on Galvin Brothers, Jeff and Chris, whose mother worked as pot washer at a local restaurant in Brentwood. “And I only beat Jeff in by about 10 minutes this morning,” he says.

Now taking its cues from the much-loved Bistrot de Luxe (RIP) on Baker Street, Galvin Bistrot & Bar neigbours La Chapelle, featuring gleaming tanks of unpasteurised Pilsner Urquell. On request, La Chapelle’s list is also available here, “for people who want to eat and sit more informally but still drink very well.” The Galvin empire comprises Galvin at Windows, too, atop the Park Lane Hilton, which gave rise to TV presenter, boxer and hospitality icon, Fred Sirieix, and The Green Man, Chelmsford, which has proved the busiest venue post-lockdown. “Galvin at Home” has also been a phenomenon. “Having started late at the end of May, we expected to do 20-30 meals a day but ended up closer to 400 – and it’s still all hands to the pumps.” says Nisbet.

During lockdown, Nisbet catalogued baking experiments using his auntie’s 10-year-old starter, tried his hand at golf, “pitching on Wanstead Flats,” and, through necessity, undertook “ad hoc plumbing” with “string and wine corks.” To mark his sixth wedding anniversary, he thought it “a fitting hello” to dine at his workplace.

Head Sommelier, Stephen Nisbet (whose CV includes, in London, The Square, Petrus, Green’s Oyster Bar and Aurora at what is now Andaz, and, further afield, L’Ortolan, Lettonie and The Balmoral further afield, believes La Chapelle’s ecclesiastical atmosphere, “helps elevate even the most honest bottle to a more sophisticated experience which winemakers can be very proud of.”

Chapel-like, the building was in fact intended as a girls’ school, later redeployed as a parish hall and a gym. In reference to the restaurant’s name and setting, as well as Jeff Galvin’s vinous preference for wines of the Northern Rhône, is the prized vertical of Jaboulet’s Hermitage La Chapelle, reaching from 1952 to 2006, including a bottle of “the legendary 1961,” offered at a mere £19,500 (plus service). This was rated, according to the descriptive page on the wine list, as one of the “twelve mythical wines of the 20th century.”

However, for those with less costly tastes, Nisbet takes pride in being able to offer, “good value bottles, increasingly from producers who farm sustainably,” such as Will Davenport’s Horsmonden from East Sussex, Domaine Goisot’s Exogyra Virgula (Saint-Bris) and COS Giusto Occhipinti Pithos Bianco (Sicily). Be sure to cast an eye over an intriguing selection of Bin Ends, too.

Dishes, refined by the globetrotting Galvin Brothers, Jeff and Chris, whose mother worked as a pot washer in a local restaurant in Brentwood, Essex, may include lasagne of Dorset crab with beurre Nantais, possibly served with Le Confluent Muscadet (Famille Lieubeau). Follow on with grilled Cornish red mullet with celeriac and wasabi and apple consommé (offered with Willunga 100 Grenache from McLaren Vale), then culminate with an apple tarte Tatin with Normandy crème fraîche, perhaps with a mature Rivesaltes Ambrė (Chez Jau).

Nisbet recalls the bravest food and wine match at the restaurant. “Mushroom risotto with slightly oxidised Jura Chardonnay: an amazingly rich, hearty match with the potent mushroom flavour.” He also fails to evict the memory of the worst combination, albeit encountered elsewhere. “Steak and béarnaise with South Australian Shiraz. The heavy red totally overpowered the delicate meat; I chose a rich Chardonnay instead which may not have been the most obvious choice, but was a perfect combination.”

As well as Galvin Hop next door, complete with gleaming tanks of unpasteurised Pilsner Urquell, the Galvin empire includes Galvin at Windows atop the Hilton, Park Lane, which helped give rise to the media career of GM, Fred Sirieix, Galvin at the Athenaeum, Piccadilly, Galvin at Tottenham Hotspur, and outside the M25, Galvin Green Man in Essex, and outside Britain, Galvin at City Walk, Dubai.

It was the childhood sip of his father’s homemade wine which first inspired Bari-born, Gaetano Giangaspero to become a Master Sommelier. His career highlights on land have included Home House, the Orrery and Quaglino’s in London, and the opening of eighteenth-century Veronese property, Villa Cordevigo by Lake Garda in Italy, as well as, afloat, the Miami based Oceania luxury cruise line.

At La Chapelle, which was actually built as a girls school, and also saw service as a parish hall and gym, expect a strong French offer in both dishes and wine, ‘with extra attention to Hermitage La Chapelle’ advises Giangaspero. Indeed, vintages reaped from the famous hill of Hermitage, whose landmark chapel was acquired by Maison Paul Jaboulet Aîné in 1919, reach back to the early 1950s, including, at a mere £19,500 a bottle, the legendary 1961. This was rated, according to the wine list, as one of the ‘twelve mythical wines of the 20th century…’

However, for those with less costly tastes, Giangaspero takes pride in being able to offer a wine ‘at a price point for every single occasion – from a quick business lunch to celebrations.’ Hence the presence of circa 40 wines at or under £50 per bottle, including Turkish Öküzgözü, Mourvèdre from the Swartland, and, with bottle age, Madiran by Château Bouscassé.

This is a list rich in sweet treasures, too, including the own label Galvin Tawny Port (Quinta de la Rosa) and Vin de Constance by the glass, and artisan Calvados, such as the 1979 Lemorton Vieux Calvados, which Giangaspero notes was ‘distilled in 1979, the same year that Fleetwood Mac’s Tusk was released’).

There’s a great Rhône selection, including, perhaps unsurprisingly given the name of the restaurant, a Hermitage ‘La Chapelle’ vertical selection reaching back to 1952 from Paul Jaboulet, if expense accounts or the mood to splash the cash takes a grip.

Devised by group wine buyer Andrea Briccarello, the landscape-format list, which begins with a quote from Paulo Coelho, boasts around 50 wines available by the glass, including Soave Classico ‘Calvarino’, Pieropan poured from magnum, as well as 14 available by the 475ml ‘Pot’ (475 ml).

A fascination for geography is clearly apparent, with titles including ‘The Eastern Borders – From Alsace to Mont Blanc’, and ‘Red Wines from Lyon to the Mediterranean Sea’.

Pristine French-influenced dishes using ingredients from our islands include starter of velouté of Roscoff onion and slow-cooked Burford brown egg and crisp shallots from chef’s menu, or, from the à la carte, Scottish lobster tartare with chilled granny smith consommé and oscietra caviar.