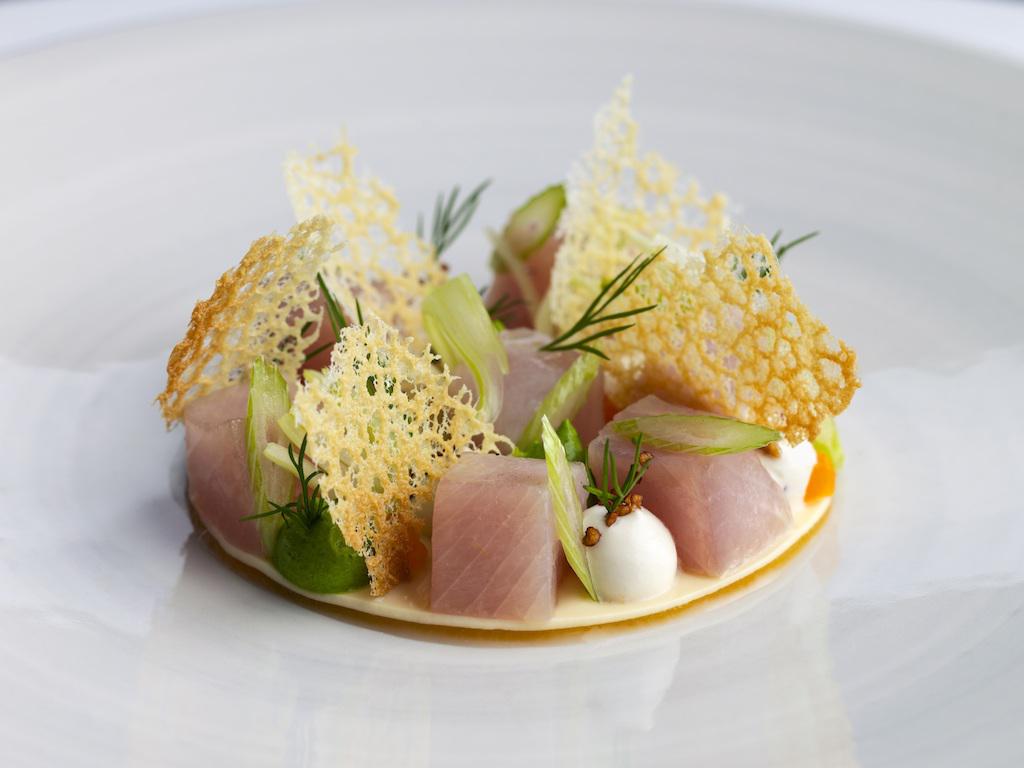 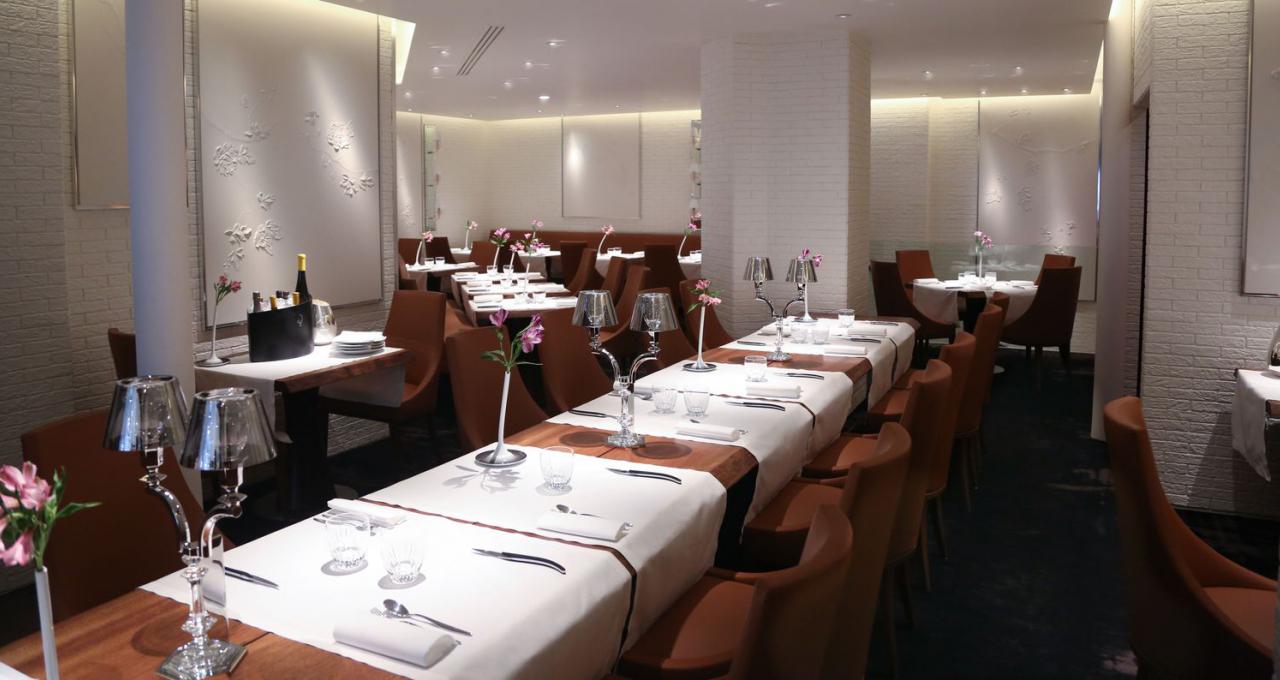 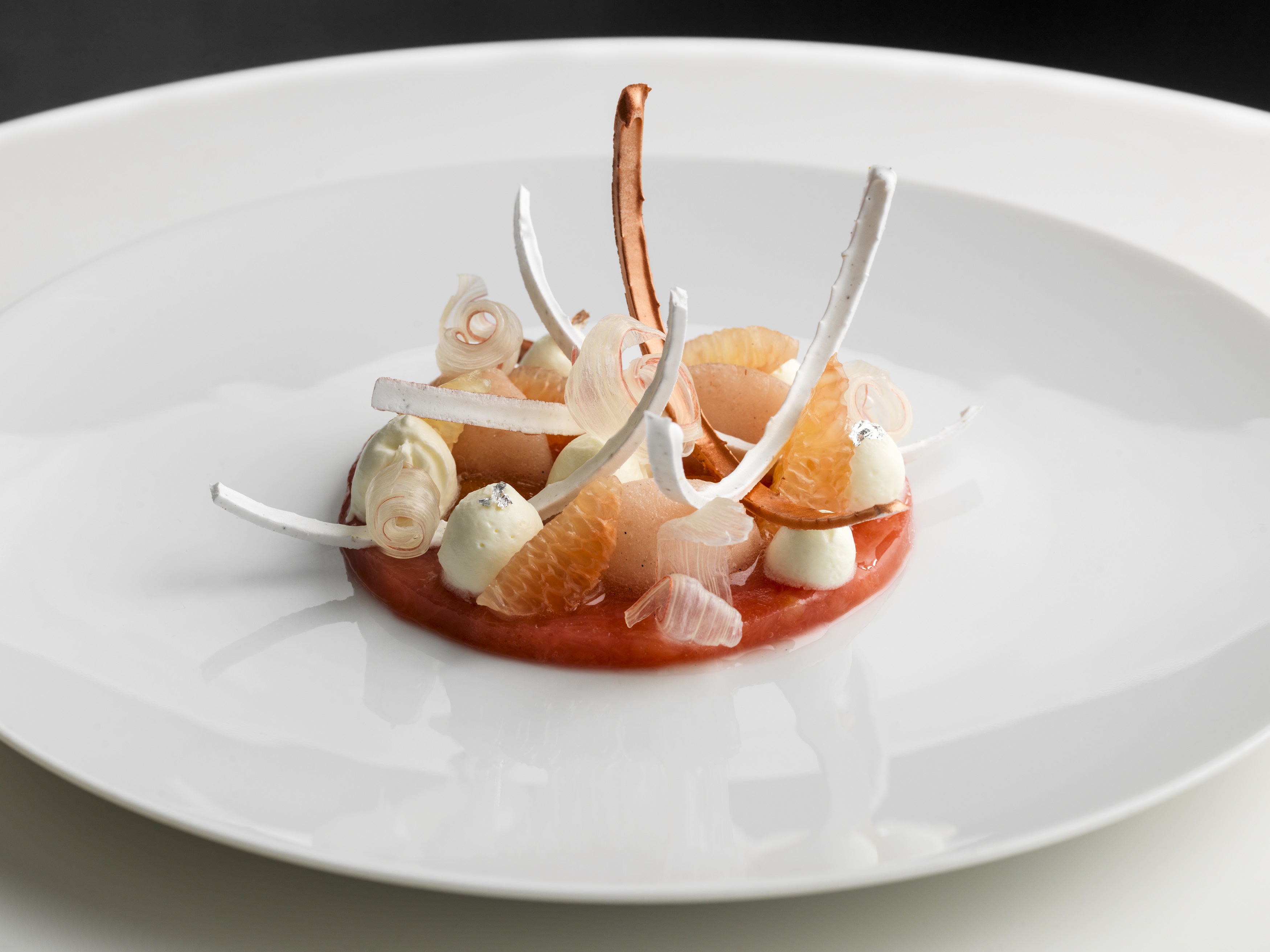 Wines of the Rhône and Château Latour
Pristine, umami-rich cooking by Anne-Sophie Pic
Soaring pillars in the spacious dining room
The expertise of Jan Konetzki

The triple Michelin-starred mothership of chef and restaurateur, Anne-Sophie Pic is located in gardens in Valence at the heart of the Rhône corridor, hence it seemed natural for Jan Konetzki, the sartorially noteworthy wine director of 10 Trinity Square, to focus on wines stemming from the mighty river’s banks at Pic’s elegant London outpost. “While I pondered the idea, a vast map of the river unfolded in my mind. From the glaciers to the Mediterranean sea, there is so much to discover.” Konetzki, who feels, “we’re going to own the Rhône crown for the UK”, extols the diversity of what may be reaped. “There is everything from entry-level amazing value bargain finds such as Jacquère and Chasselas from the banks of Lake Geneva which are stunning and can replace a Chablis easily but cost half the price, to established, world-class, blue-chip wines such as Jean-Louis Chave Cuvée Cathelin Hermitage which can cost the same price as a bottle from Domaine de la Romanée-Conti.”

As well as offering plentiful Rhônes, Konetzki highlights of vinous “Cousins” on his list, hence one “cousin” of the Northern Rhone, a Grüner Veltliner by producer, Frank Hirtzberger, is portrayed thus: “if Arnold Schwarzenegger is the most famous person from Austria, then Grüner Veltliner is the most famous grape variety. This wine is produced from the best vineyards with the greatest attention to detail. It is complex and age-worthy; reminiscent of the most well-known whites in the Northern Rhône.” And at the top end is “glamorous cousin” Penfolds Grange, described as “one of a kind,” and “inspired by the great hermitage hill of the Rhône… giving Hermitage a run for their money!”

Konetzki believes sommeliers are foremost entertainers, there “to ensure people have a good day out,” which is why he enjoys introducing other factors to the investigation and appreciation of wine, such as offering a tasting of half bottles versus magnums at the restaurant, “which was a revelation for everyone, there being more intensity from a magnum, which is a slow burner, like a young artist compared to a neutral, soft half bottle.”

Although initially intended to cater for nearly 200 guests a day, the elevated cooking its clientele, which Konetzki describes as “gourmet tourists” have come to appreciate from this destination restaurant means it, in reality, treats, very well indeed, a maximum of half that number.

A well-known wine merchant described Jan Konetzki’s list at the graceful Dame de Pic as being ‘like a love poem for wine… Because there’s nothing missing. Because it’s not about having the longest list, but the most carefully chosen.’

La Dame de Pic’s home being Maison Pic in Valence, at the centre of the Rhône valley, it seemed natural to Konetzki to focus on the wines of the area, ‘especially as many others overlook the region,’ he says. ‘While I pondered the idea, a vast map of the river unfolded in my mind. From the glaciers to the Mediterranean sea, there is so much to discover. From hidden gems like aged Chassellas from Switzerland to ‘Grand Wines’ like Hermitage from J.L. Chave and Châteauneuf-du-Pape from Rayas. The Rhône has it all at different pinpoints.’ To make it ‘La version de Londres’, resembling the melting pot of countries and cultures, Konetzki and his couth team added a section of ‘cousins’ to offer international alternatives ‘in the vein of the Rhône style’. These may include biodynamic ‘Kalimera’ Biancolella from Itay’s volcanic island of Ischia close to Naples, described on the list as having the ‘perfume and richness of a great Viognier from the northern Rhône.’

While The Club at 10 Trinity Square is about classics, comfort ‘and a majestic old-world feeling’, La Dame de Pic is contemporary, elegantly aromatic and ‘so Frenchie’, notes Konetzki, full of familiar but perhaps ‘unexperienced’ flavours. ‘We speak to guests in either area and have something different to offer on the side. It is very special to be able to bid so different experiences under the same roof.’

Coffee, in both cup and cooking, as well as tea, are taken very seriously at La Dame de Pic incidentally, along with a neat sake selection both here and at Japan meets China restaurant, Mei Ume, nextdoor.

Anne-Sophie Pic is one of the most highly decorated chefs in France, with six Michelin stars to her name, including three at her flagship restaurant, Maison Pic, in Valance on the left bank of the Rhône. From a family of culinary whizzes, Pic is the third generation of her clan to have earned three stars, and did so with no formal training.

La Dame de Pic is a London spin-off of her more casual restaurant in Paris. Its wine list is curated by German-born head sommelier Jan Konetzki, who was plucked by The Four Seasons from the three-Michelin-starred Gordon Ramsay Royal Hospital Road.

The gargantuan list is spread over 43 pages with a focus on the Rhône, but not exclusively, showcasing regional classics and lesser-known whites alike. French classics are at home at Le Dame Pic, but hunt carefully and you will find some esoteric gems.

The soaring ceilings and intricate lattices of Anne-Sophie Pic’s London restaurant are best appreciated with Rare Rosé Champagne in hand, poured by head sommelier, Martyna Pawliczek. Under these adornments in an otherwise minimalist room, Pic collects and marries distinctive spices, herbs, coffee and tea in her unique, elegant dishes.

Her core, multi-generation, family-run restaurant being located in a garden at Valence at the heart of the Rhône corridor, it seemed natural for Lüneburg-born, Jan Konetzki, wine director of 10 Trinity Square and ambassador for Artemis domaines, to focus on wines stemming from the mighty river’s banks at the two Michelin-starred London sequel, located on the banks of another historic river – the Thames. Crucially, these are now subject to temptingly “sexy pricing,” and served only in Zaalto stemware, says Konetzki.

“A vast map of the river unfolded in my mind,” says Konetzki. “From the glaciers to the Mediterranean sea, there is so much to discover to help us own the Rhône crown for the UK.” Konetzki extols the diversity of what may be reaped, “from the entry-level amazing value Jacquère and Chasselas from the banks of Lake Geneva which can easily replace a Chablis, to world-class, blue-chip Jean-Louis Chave Cuvée Cathelin Hermitage.” Annually, Konetzki likes to show more modest renditions from big names, such as an older year of Coudoulet from Château de Beaucastel. “There is life beside the grand names!”

As well as offering plentiful Rhônes, Konetzki highlights vinous “Cousins” on his nicely-paced list, hence one “glamorous cousin of the Northern Rhône” is Penfolds Grange, “inspired by the great Hermitage hill of the Rhône.”

Although the list is clean-cut and helpful enough for diners to decide what wine they would like to enjoy unassisted – “a sommelier fairy dies when a guest prefers not to speak to a sommelier,” jokes Konetzki – his team are always on hand to help find the perfect match for a dish. They can also offer eye-opening experiments, too, such as a tasting of wine in a half bottle versus sometimes very boldly illustrated magnum, “there being more intensity from a magnum, which is a slow burner.”

Dishes, inspired by Pic and realised by newly-appointed head chef, Marc Mantovani, who rose the ranks of Maison Pic, may include signature starters of hat-like “berlingots” pasta parcels, possibly filled with soft Baron Bigod cheese from Sussex, foie gras dry-aged in beeswax shown first at the table under a glass cloche, then poached in mushroom consommé, and Scottish grouse marinated with Batak berries and whisky, served with a parsnip purée and chestnut. The bread and malt-enriched butter is arguably London’s best, too.

Meanwhile, Anne-Sophie Pic’s interest in cocktails sees a reinvigorated bar as well as a rising focus on novel spirit pairings. “We took on a new eau-de-vie producer from the Lake District,” notes Konetzki. “They distil the fruits of 1,000-year-old apple trees and make a crazy framboise, as well as an after-dinner chestnut barrel-aged gin.”

Although initially intended as an albeit upmarket brasserie, the elevated, celebrated cooking has attracted “gourmet tourists” and high profile collaborations, such as the four hands event with both Anne-Sophie Pic and Core’s Clare Smyth with whom Konetzki used to work at Royal Hospital Road, as well as the Chinese New Year banquet with the neighbouring Mei Ume.