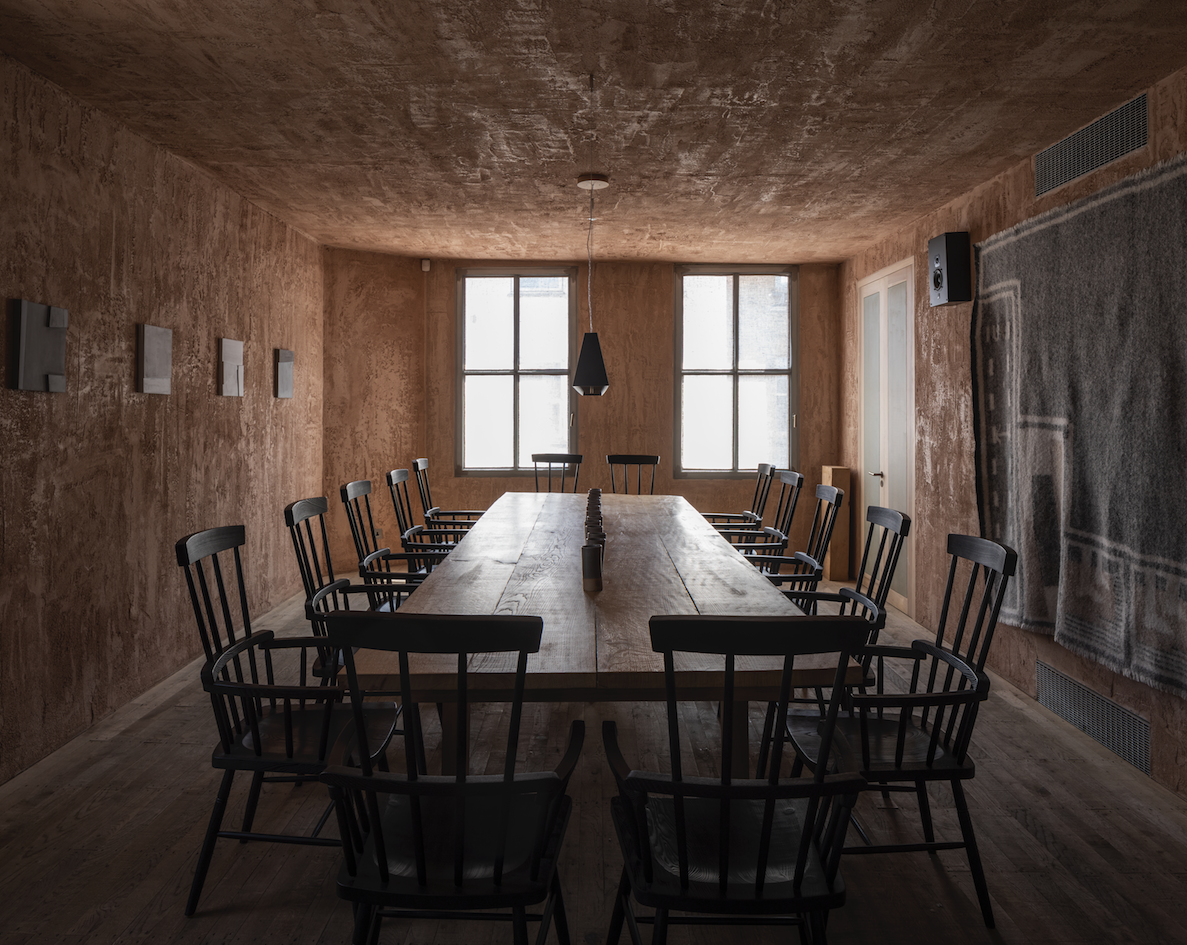 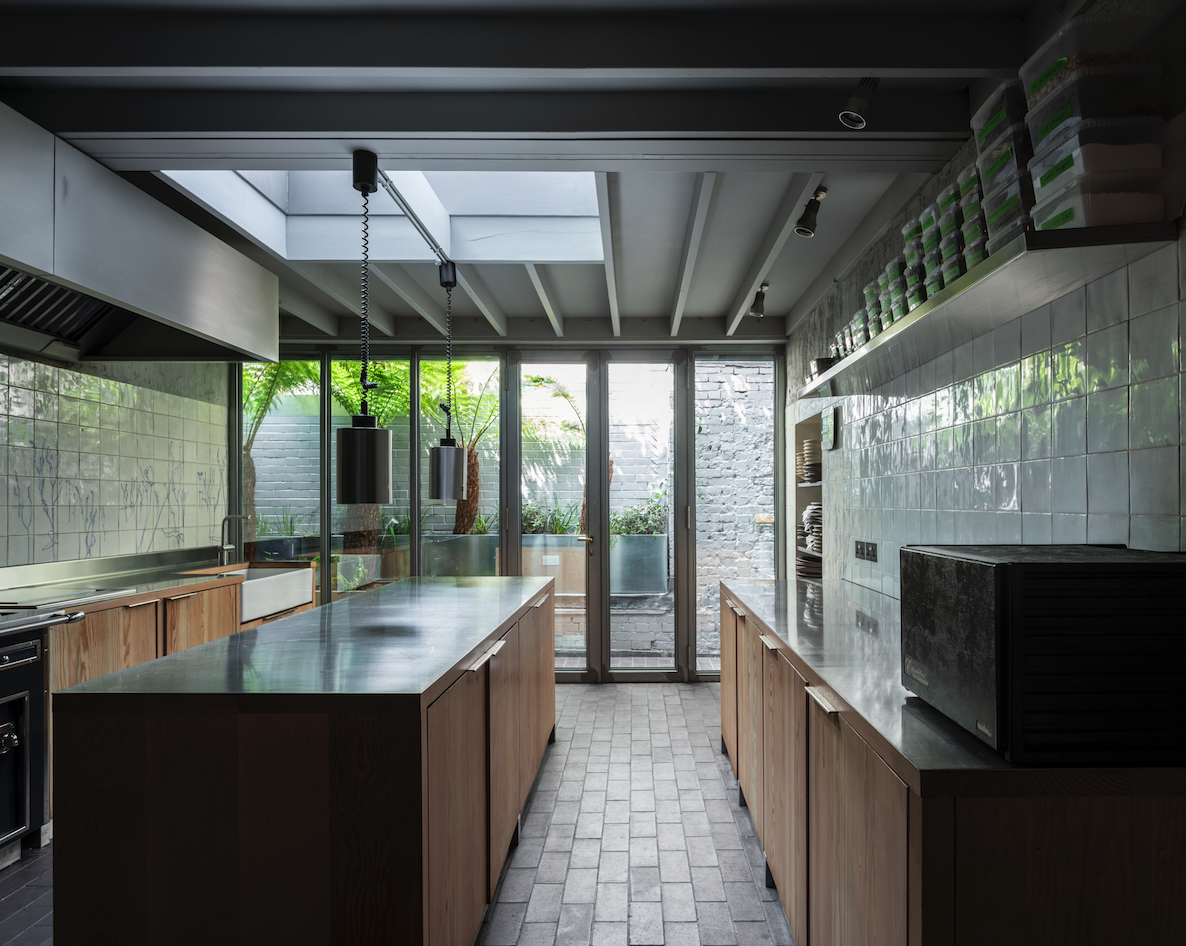 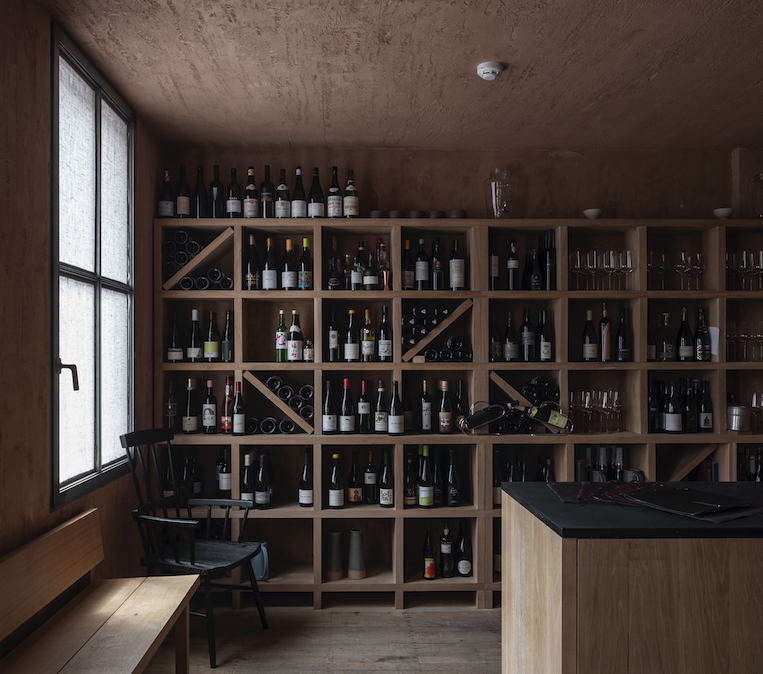 Chef Edoardo Pellicano’s collaboration with James Brown of the Blue Mountain School was born to refine the concept of the dinner party and boasts an adventurous cellar.

Four nights a week, guests are buzzed through a modest door off cobbled Redchurch Street to be greeted with a red prawn and caviar tart and a chilled, handmade clay cup containing a Northumberland gin martini scented with German vermouth and a dot of olive oil.

Mãos (Portuguese for “hands”) was conceived as a cocoon-like, one table dining room within the Blue Mountain School, an interdisciplinary environment dedicated to craft and cultural practices. The layout has subsequently made greater use of the six-storey building, including the private chef’s table in a lofty double-height room, the main, terracotta coloured dining room with views onto the beautifully-tiled kitchen led by Edoardo Pellicano, and, considered the venue’s “favourite seat in the house”, the solo dining spot at the chef’s pass. Reached at the top by a paddle staircase is the wisteria-scented terrace.

Taking over from Alex Casey is Charlie Sims, former restaurant manager of Noma in Copenhagen. His CV also includes Brunswick House and Jamie Oliver’s Fifteen (RIP) in London. Charlie helps oversee the wine selection, chosen from a leather-bound list, with particular focus given to farmers who first and foremost work with respect for the totality of the environment and make wines “full of life that paint an authentic picture of time and place,” he says.

The list runs to 120 bins, focusing predominantly on Europe, and alongside the bottle list, there is now a beverage pairing consisting of five-to-six serves to accompany Pellicano’s menu. Christian Tschida’s Cabernet Franc rosé provides a “deeply refreshing jolt of energy” alongside dishes of sweet beetroot with crisp goat’s milk and blackcurrant, followed by beef fat aged lobster tail with a deep, umami-rich sauce made from the heads, whilst highly-perfumed Cuvée Alexandria from Tom Lubbe of Domaine Matassa “riffs off sea buckthorn juice running through a rich turbot head stock and aged turbot main.”

Similar attention goes to a small selection of sakes where Sims’ preference leads towards those which are unpasteurised and unfiltered, being “more expressive than conventional styles.” There is also a considered selection of spirits including Neta and Hermógenes Vasquez’s deeply mineral Tepextate Mezcal which is Sims’ preferred way to “sign off” after the intricate menu.

Four nights a week, 16 guests are buzzed through a mysterious door off the cobbled Redchurch Street into a kitchen of hand-painted tiles with a shallow leafy terrace. Led by Edoardo Pellicano, one of four chefs may shuck them a scallop to begin, briefly poached in a warm broth, accompanied, perhaps by a pre-batched punchy Northumberland gin martini scented with German vermouth and seasoned with a dot of olive oil, served in a cool clay cup.

Mãos (Portuguese for “hands”) is a cocoon-like, earthily textured dining room with rune-like tablets and a tapestry on the walls deep within the Blue Mountain School. This mall of craft is a detailed, organic-seeming space with galleries of crafts and stock pieces from cult fashion label, Hostem, topped with a wisteria-scented terrace which guests dining on Saturday “matinees” visit in supplied slippers via an irregularly paddled staircase.

Mãos is the preserve of Nuno Mendes who is perhaps best-known for being the head chef of Chiltern Firehouse. However, Mãos’ roots run deeper to the point when Mendes ran an almost mythical supper-club from his Shoreditch flat called The Loft.

Guests are encouraged to choose wines within an almost ecclesiastical anteroom from a soft leather-bound list compiled by Alex Casey in a font designed specifically for the Blue Mountain School. Wines by the glass are chalked at an angle on the slate countertop.

Casey gives preference for “artisans who respect for the totality of the environment in which they produce.” He is particularly adept at plotting a seamless vinous path through the 17 courses, which may include smoked eel and maitake mushrooms, and cherry stone ice cream finished with yarrow flowers. “Normally, beverage pairing is death by 1,000 cuts where you wish for more goddamn wine without the explanations which should have a lid put on them,” he bemoans. “But we offer more ‘meaningful’ measures.” These are poured into Gabriel-Glas Gold and Zalto Universal glasses.

Of the sheer number of courses, Casey is keen to point out, “it’s not a marathon designed to destroy your waistline and, the following morning, your will to live!”

Looking at the trophy wall of spent bottles of icons by Silex, Raveneau, Gaja and Gravner, Casey notes, “it’s been a good first year.” Thankfully, their prices have an earth wire attached, too, Casey having learnt the importance of conscientiously offering value while working at the “nimble” Sager + Wilde for three years prior.

Guests are not tethered to the table. “They can keep us company in the cellar or hang out in the kitchen,” says Casey. “When a dish is ready, we’ll find them with cutlery. Our objective is to give a proprietary sense.”

Casey and his co-host, Sarah Papadimitriou, find it hard to describe the “magic” which happens around the table, which touches people on “a more personal level.” So as not to break the spell, guests’ credit cards are authorised in advance, avoiding the rude interruption of glowing PDQ machines and matters of mere finance.

Casey and Papadimitriou are proud of the rate of returning guests at Mãos, “being up-to 40% some weeks,” says Casey, including a noble prize-winning physicist, “and the lawyer of Julian Assange.”