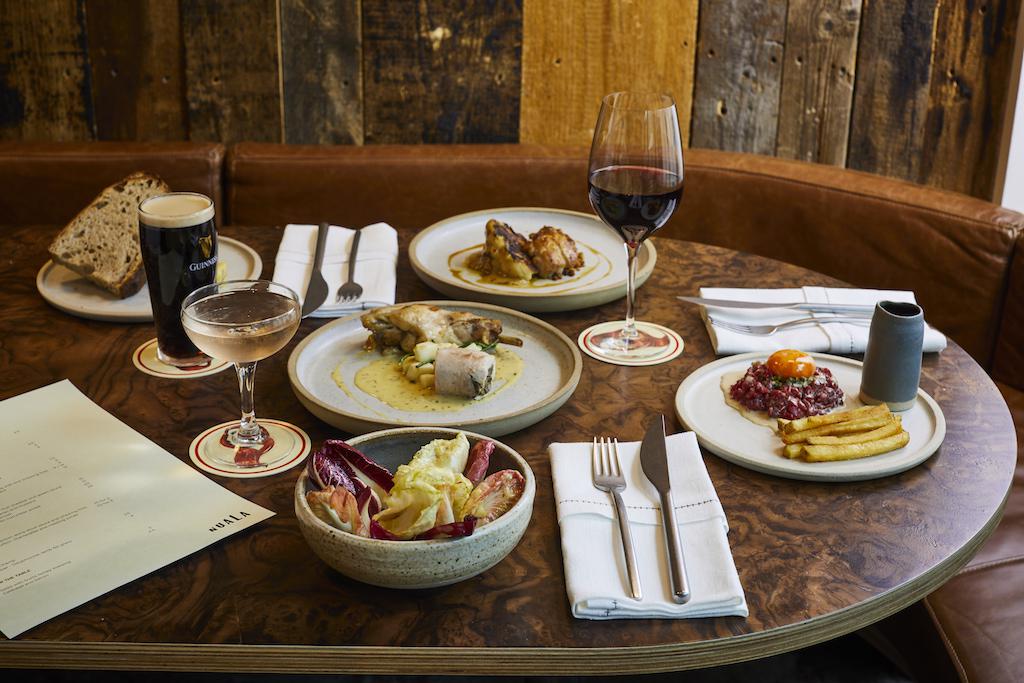 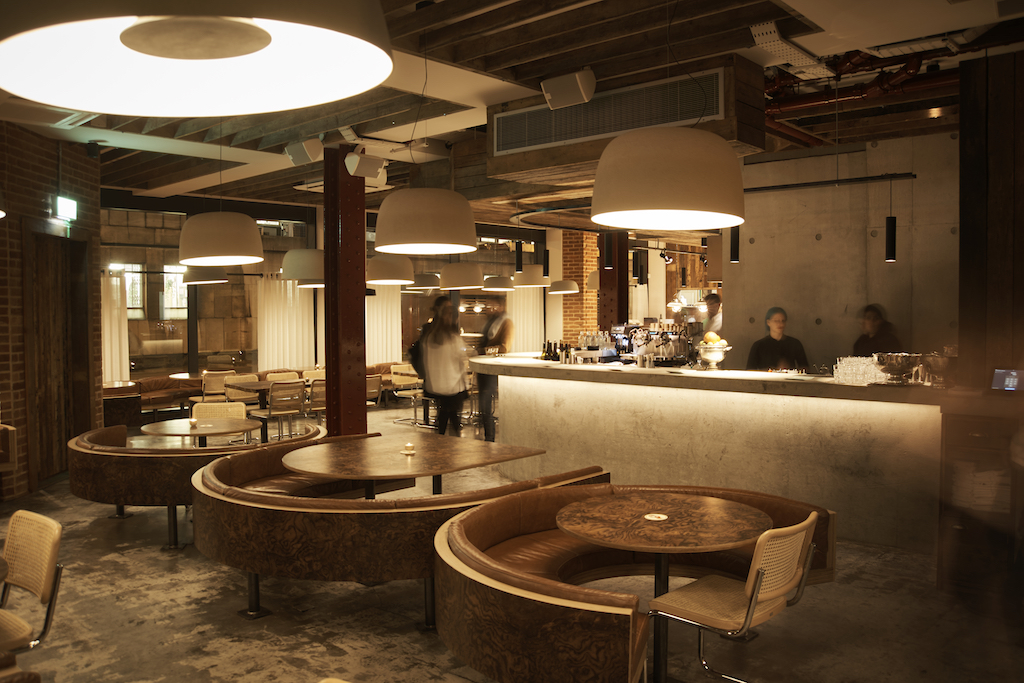 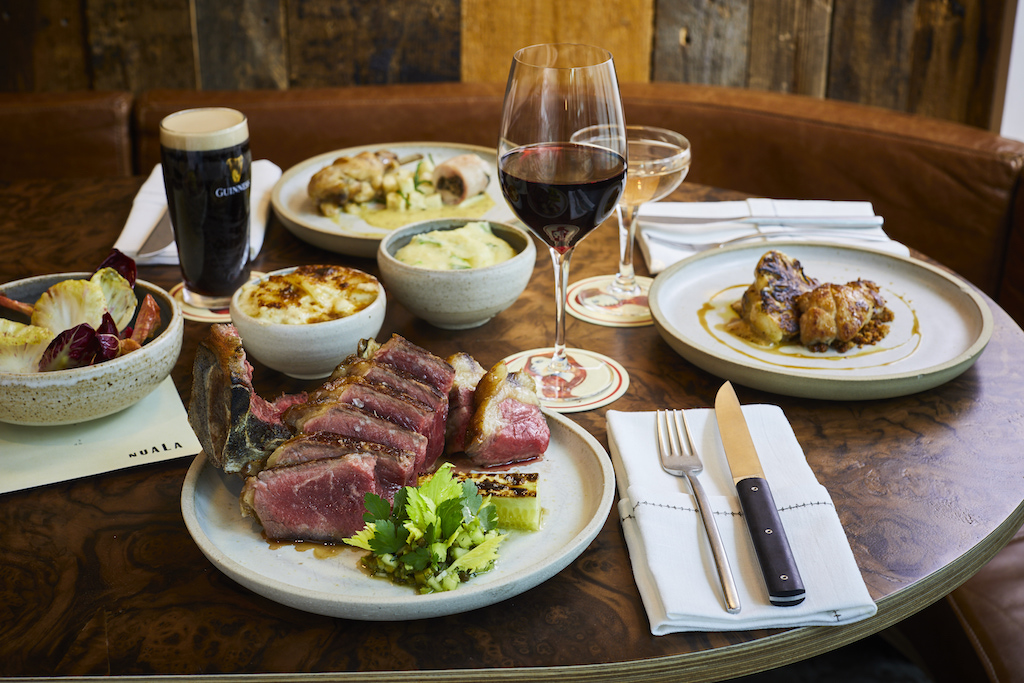 Wines may include ‘funky’ Garganega, ‘linear’ Trousseau and Zweigelt which, Spencer reveals, ‘is our most popular wine...’

Aromas of embers, a pleasing playlist and a team employed on positivity of personality help make Nuala, so-called after co-founder, Niall Davidson’s sister, and located moments from Old Street’s rebranded ‘Silicon roundabout’, one of London’s most greeting restaurants.

Nuala caters to a disparate clientele, including, says wine and comms manager, Honey Spencer, ‘techies working in the rest of the White Collar Factory building which features a running track on the fifteenth floor,  City workers who deplete our classics list, and, at weekends, the Essex army.’

From comfy leather banquettes or ergonomic Thonet chairs, guests may watch ingredients with surefooted UK provenance being slow cooked over coals and finished on grills beyond an architectural concrete kitchen counter.

‘I wouldn’t call myself a sommelier,’ says Spencer, sharing a birthday bottle gifted by Champagne supplier to Noma and indeed Nuala, Charles Dufour. Seeing six months skin contact, the alarmingly hued fizz is named ‘Honolulu’ after the gateway to Hawaii – a deliberately different landscape to northerly, chalky France. ‘I just like translating wine,’ she adds. ‘And when guests ask if I’m the sommelier, I say, “I drink the most here!”’

Spencer’s career took flight close by at Jamie Oliver’s Fifteen. Wanting to further her international business and marketing degree, she sought a relevant role at Jamie Oliver Ltd. However, with no position available, she opted to work the restaurant floor where on her potential was spotted and nurtured by then manager and drinks expert, Alex Thorp (co-founder, 161 Food+Drink and Wines Under the Bonnet). When an opening in marketing later transpired, Spencer beat off 200 applicants while continuing to work at Fifteen on weekends. Compared to the mundanities of office life, it was ‘liberating’ to speak to the plethora of pleasure-seeking guests.

Later, Spencer became ‘obsessed’ by Hackney’s Sager + Wilde wine bar, ‘where you could work in your own clothes and use your own jargon.’ On the subject of argot, one aspect Spencer constantly evaluates during team training is what to convey to customers. ‘Do we talk about flavours and textures, or how a wine makes you feel?’

Noting the risk of millennials ‘drying up,’ Berkshire-born Spencer recalls how Sager + Wilde succeeded in teaching wine to a new generation. ‘Young people weren’t exposed to wine unless they grew up in west London with a cellar.’ While working under mentor, Michael Sager, Spencer met two customers from Denmark who were impressed by the instances of natural wine. ‘But to really understand natural they told me to come to Copenhagen.’ Thus a summer exeat turned into two and a half years, working as GM at harbour-side wine bar, Den Vandrette, run by merchants, Rosforth and Rosforth. ‘The Gods of natural wine with world famous musicians and artists as their disciples! I learnt a huge amount from Sune Rosforth.’ The experience fortified Spencer to take on the challenge of irrigating the guests of Noma, Mexico.

At Irish-accented Nuala, replete with flame-haired lady as logo, Spencer’s circa 100 bins are drawn from 21 suppliers with a sliding cash margin. The list itself is tied with treasury tag and features a duck egg blue cover emblazoned in red with nine graphics and legends celebrating regions, producers, grape varieties and arguably the best Guinness in London. ‘We’re a casual bistro with a semi-ambitious wine list focusing on the organic but not overly provocative,’ she says, ‘although my field is natural wines.’ Indeed, Spencer helped establish a natural wine school with Noma alumni.

Wines may include ‘funky’ Garganega, ‘linear’ Trousseau and Zweigelt which, testament to her beliefs and infectious enthusasm, Spencer reveals, ‘is our most popular wine, which works when a table wants just one bottle to see them through dinner. It even satisfies fussy Americans.’

Also of note are pours from Claus Preisinger’s ‘space ship-like winery nestled by Lake Neusiedlerse.’ And of Christian Tschida’s ‘Himmel Auf Erden’, Spencer likens it to ‘a grown-ups version of Um Bongo!’ Spencer is also surprised by the ‘staggering amount of young men liking Fleurie.’

Dishes, devised by co-owner and exec chef, Niall Davidson (whose father also realised the interior design) and head chef, Colin McSherry may include gently warmed, slightly smoked beef tartare from Torloisk Highland cows pepped with sauce of reduced extra stout Guinness, and veal sweetbreads with almost aesthetically identical cauliflower rarebit to start, followed by tender black leg chicken with anchovy purée and chanterelles, and fireplace pumpkin with Isle of Mull Cheddar and juicy baby artichoke hearts.  Also order bread and butter spun with dulse, a sea lettuce described on the menu as ‘traditionally used in Ireland as a cure against hangovers – and we should know’ and gratin dauphinois with lamb fat gravy…

Beneath the restaurant, with long counter, comfy alcoves, a spirits safe, and over 50 bottles of Irish whiskey, is the bar preserve of Spencer Large, former custodian of Bourbon at Barbecoa. Here Teeling 33 year old may be sampled close to retail price, while cocktails could include the ‘Veshper’, spelt as Sean Connery would pronounce it in Casino Royale.

Nuala’s team is selected on the generosity of their personalities. Indeed, Spencer’s husband, Charlie, took inspiration following a meeting with New York restaurateur, Danny Meyer to pose prospective recruits this question – ‘what is the last gift you gave someone and why?’ to tactfully gauge their dispositions.

Spencer recently visited Ancre Hill, Wales, and, of the future, plans a pilgrimage to the Jura, ‘which is by all accounts breathtaking,’ and hopes to gradually divert Londoners, ‘who can’t get past rosé from Provence,’ into other territories for their next glass of pink…