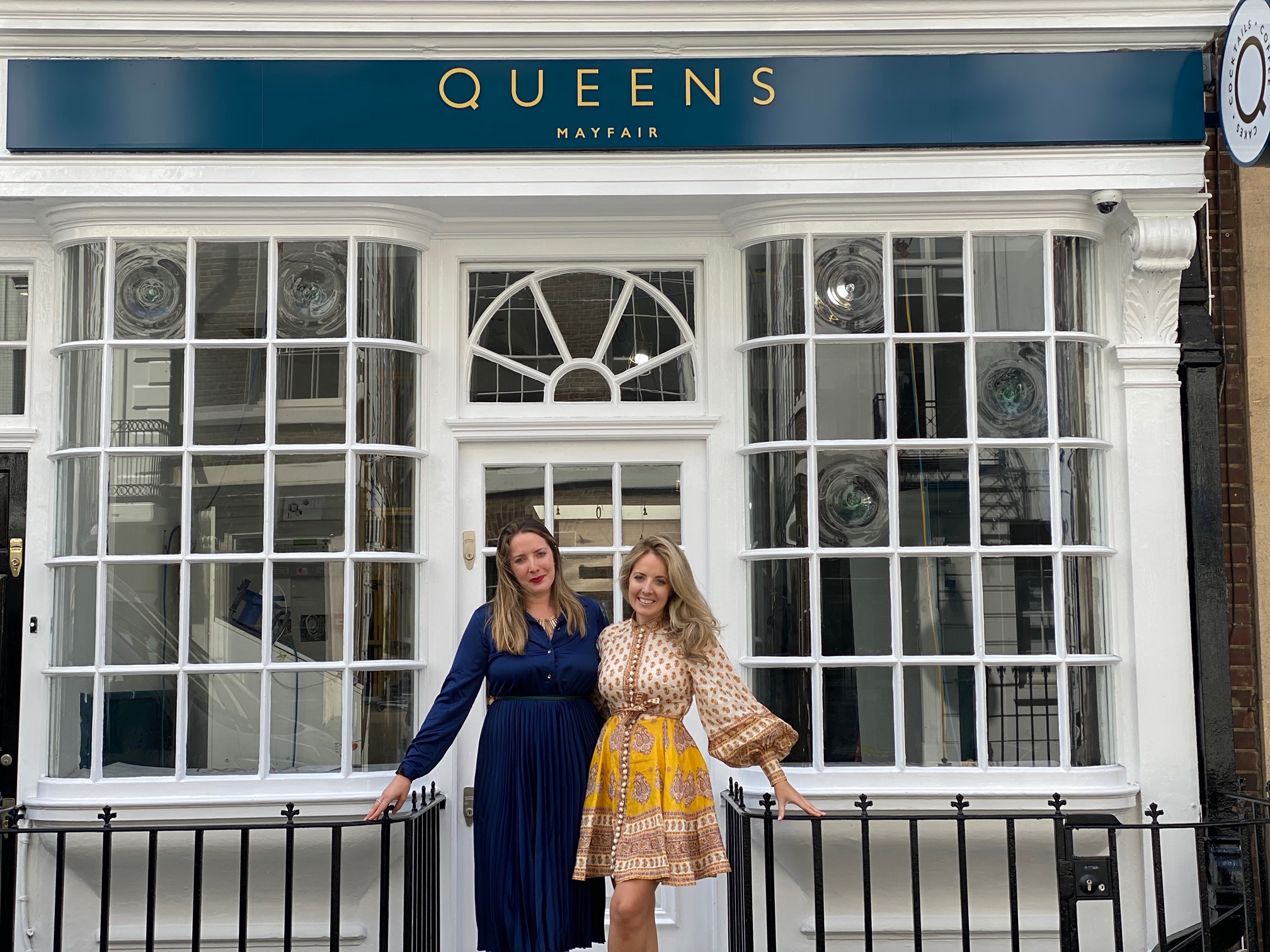 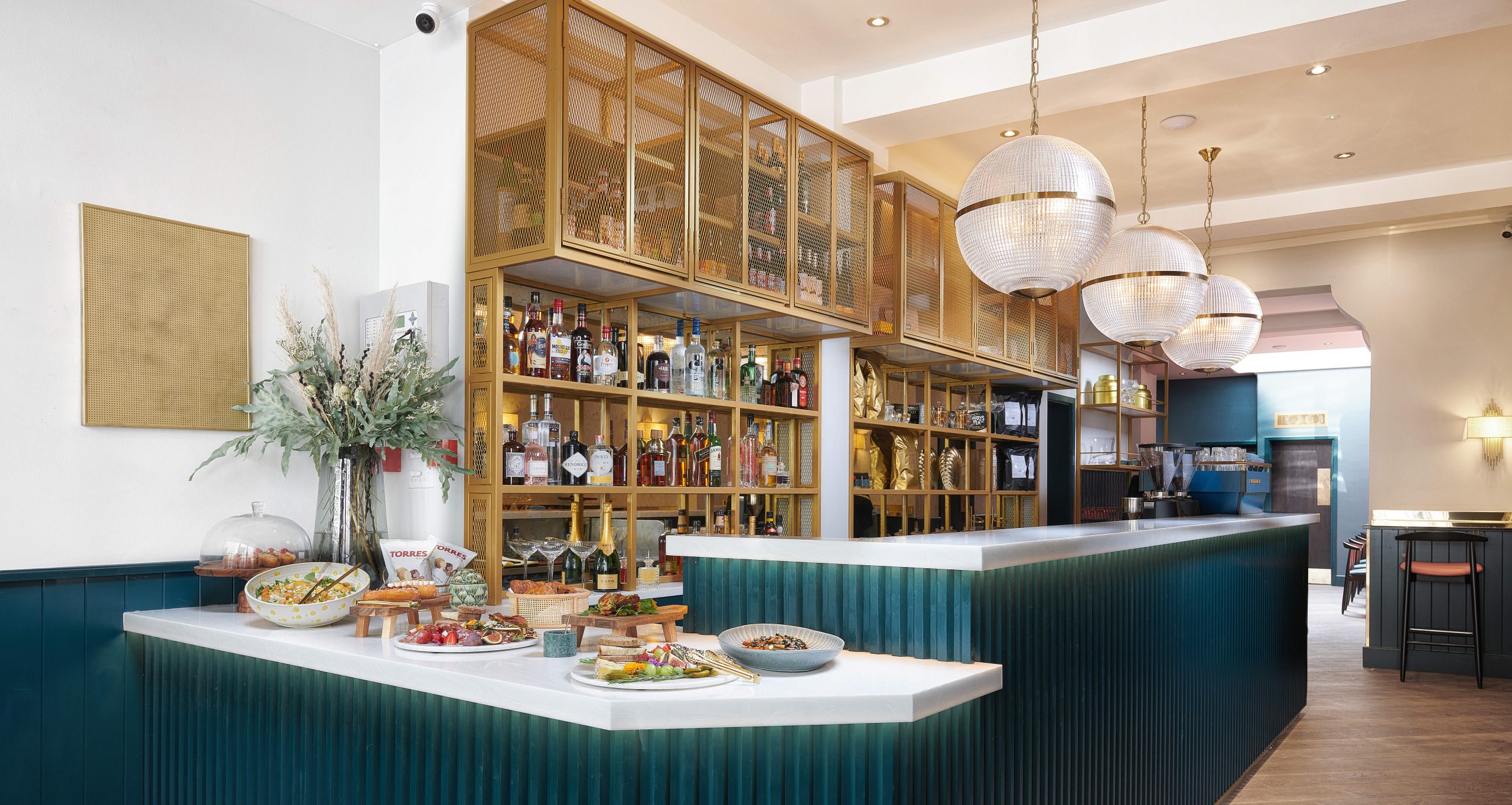 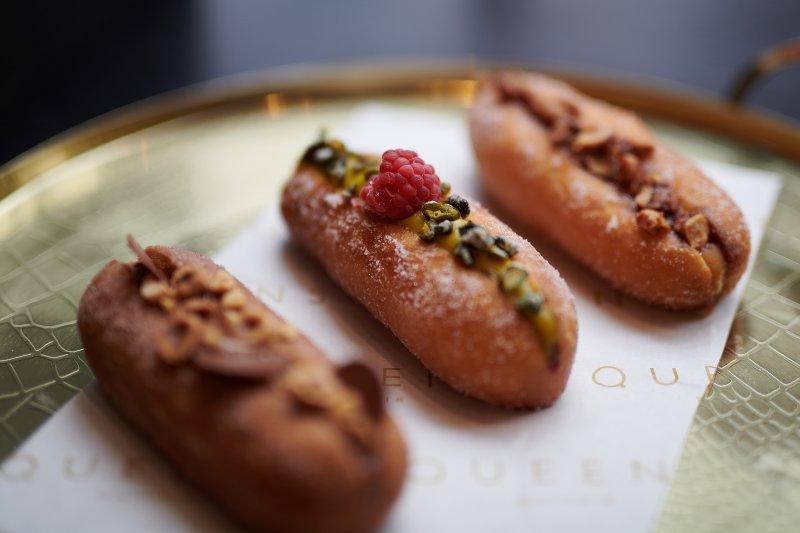 Terroir is not limited to wine alone. Combining excellent sourcing and precise equipment, Queens is a modern venue taking the pleasure of coffee seriously alongside grande marque Champagnes.

Located in a bijou Georgian building which previously saw service as a yacht broker, Queens is intended to bring something different to Mayfair beyond its chain coffee shops and at the other end, five-star hotels and private members clubs. Its forte is Specialty-grade coffee in partnership with Amir Gehl’s Difference Coffee Co., a supplier to some 60 Michelin-starred restaurants worldwide including 67 Pall Mall.

Queens is the debut hospitality venue of Dorset-raised sisters, Victoria Sheppard, a PR and marketing director recognised in the “30 under 30” list for hospitality marketing, and interior designer, Grace, who is responsible for the bright and bijou venue’s hand-painted silk wall coverings, bright orange banquettes, and private dining room for 12 lit by a Clive Christian chandelier.

Led by Specialty Coffee Association-accredited head barista, Sabrina Pastana (formerly of Soho House) expect rare parcels such as the much-anticipated arrival of the top-scoring beans from the Ethiopian Cup of Excellence which was limited to just 15 cups, and Panama Geisha by Hacienda La Esmeralda, once memorably described as “the Domaine de la Romanée-Conti of Coffee.” More modest versions include Brazilian Daterra, available as a Piccolo or even as an affogato with vanilla ice cream from Ice Cream Union.

Alcoholic coffee-based drinks include the “Creamy Cow” featuring coffee rum, Cocchi, and Campari foam, while, finished with soda and burnt lime, the “Prince Harry” blends spiced rum with ginger syrup and lime. “Our take on the Dark and Stormy,” says Victoria. Champagnes such as Krug 167 Ème Édition, Dom Pérignon and Ruinart are all served by the glass and preserved by the Genii system. There is also homegrown sparkling Pinot Noir from Camel Valley and still Bacchus from Chapel Down. Queens is also a stockist of the Munich-raised homage to Bavarian Helles, NOAM beer.

Dishes include smoked salmon from Somerset’s Brown and Forest Smokery with scrambled eggs and optional Wiltshire truffle, and the nectarine and fennel salad with smoked chicken. Other options include a sausage roll from the Hedone bakery, charcuterie boards featuring Islington Saucisson, and a “Longboy” doughnut in the guise of rose and tiramisu or salted caramel.

Come the evening, roses on tables are replaced by candles with sounds of popping corks rising above the hubbub.

In time, the sisters plan to open another London branch in Belgravia and then one in Monaco, where their father resides.