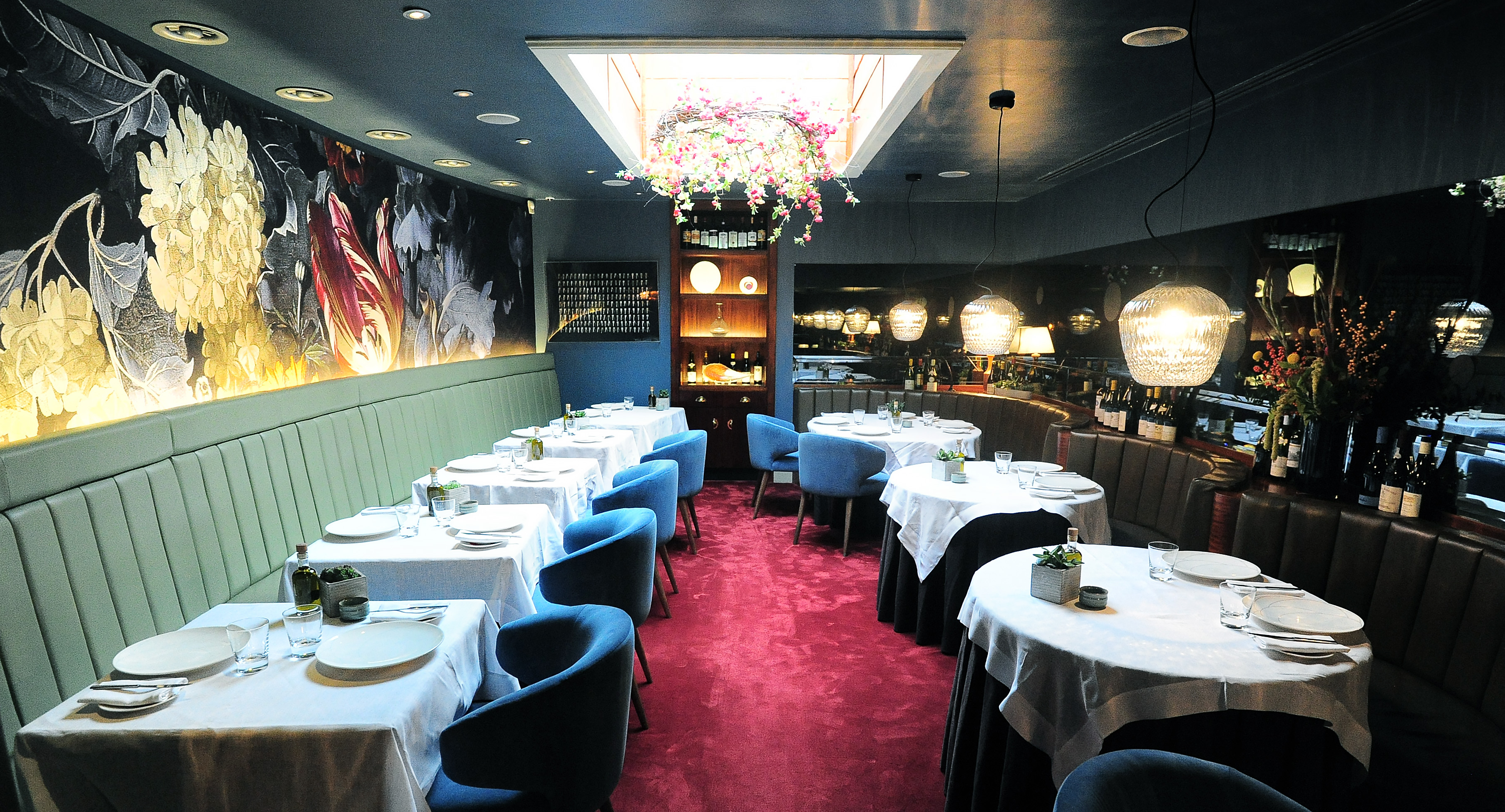 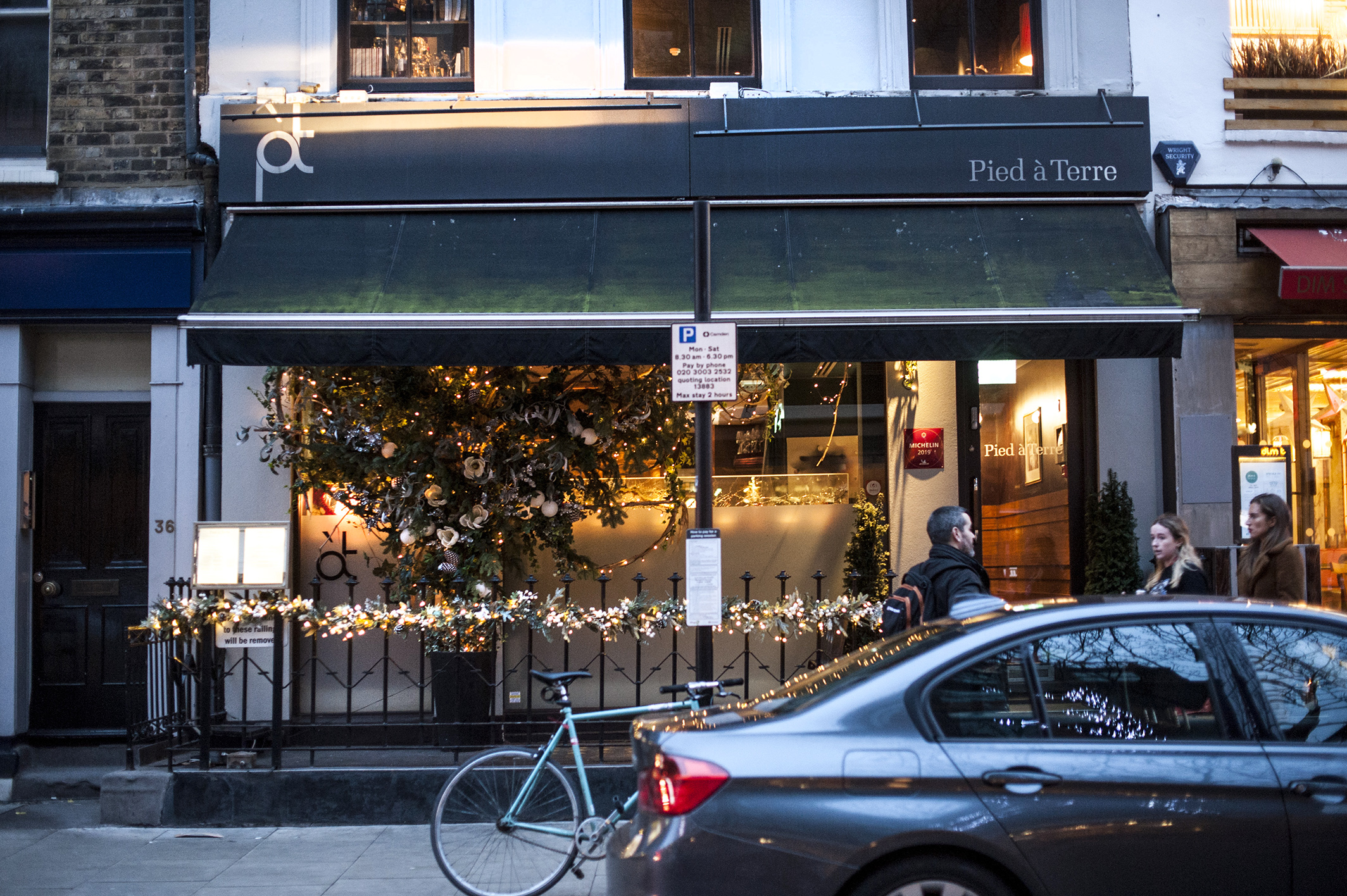 Yves Desmaris became a Master Sommelier in 1992 at 26 years old. “People say I must be an old man, but actually I’m quite youthful!” he remarks. Since gaining his first job at The Stafford Hotel, “tasting Bordeaux and Burgundy daily with Gino Nardella,” the Rhône-born, long-range cyclist and avid swimmer has been respectful of classic regions including Bordeaux and Burgundy. He subsequently worked with Gary Rhodes, “a perfectionist chef who really understood wine and food combinations,” as well as Hotel Café Royal, Lutyens (RIP) and The Arts Club, “where we sold a lot of fine wine like Penfolds Grange.”

At Fitzrovia’s tall townhouse, Pied à Terre, holder of Michelin accolades since 1993, Demarais enjoys supplying wines to the new kitchen table which replaces the bijou bar, built in collaboration with Martin Moore Design and Gaggenau. Here, a maximum of eight partakes in up-to 22 courses. Martin Moore is not incidentally a relation of Pied à Terre’s flamboyant, droll Irish restaurateur, David Moore. Born in County Monaghan Ireland, David Moore’s CV includes Le Manoir aux Quat’ Saisons and Le Louis XV. In addition to the restaurant, he is a founding partner of the multi-branch London Cocktail Club, a backer of the Treboom Brewery and publican of The Devereux at Temple, which is “flying as an old-fashioned boozer!” he gleefully reports.

Desmaris aims for “balance” in the 800-bin list, noting Pied à Terre’s dining room, “is not a place for orange wines.” Even at the lower end, wines must offer “outstanding value” and “balance” including the Bergerac Sec made by a producer he followed “for many years.” Those hundreds of bins are supplemented by a large reserve bought en primeur by restaurateur, David Moore, some of which feature in the novel 100 Club List in which wines such as Coche-Dury Aligoté and a well-rested Château Lagrange are all offered at £100, “giving it away in an anti-dry January drive,” says Moore.

Desmaris describes the cuisine of Athens-born head chef Asimakis Chaniotis as, “French-Greek” and has correspondingly discovered a fondness for Greek varieties such as Assyrtiko and Malagousia when in the hands of “a new generation of young winemakers.” Matches may include seared foie gras with carrot velouté, ginger and the supposedly beneficial for the gut, Greek Trahana with Irouleguy (Herri Mina), and bright Pouilly-Fuissé with skate wing, black curry, vanilla, seaweed and grapefruit. Culminate with arguably London’s finest cannelé de Bordeaux, a Panama Geisha coffee, and complimentary Greek Mastiha digestif.

Of Desmaris, Moore, who is a proven nurturer of, and investor in, talent says, “he is a very mature and solid character – a quiet man who doesn’t totally recognise his own talent.”

Fluent in Mandarin, French and Spanish, British born Thomas Baxter is the unnervingly clued-up first-time sommelier in charge of one of the most interesting and complete wine lists in London.

At Fitzrovia’s tall townhouse, Pied à Terre, a refined restaurant nearing three decades of trading, Baxter oversees a list of ready to drink bottles (with a supplementary substantial inventory in bond) ranging from a delicious Muscadet in the late £20s to over £8,000 for Petrus ‘82. There is also an open-minded approach to corkage.

Restaurateur, consultant and TV personality, David Moore takes a strong interest in the list, which arrives at the table boxed in volumes, but can be quickly decoded by Baxter, who can adhere to a guest’s budget and preferences – or happily surprise them. Moore rose from the role of head waiter of Le Manoir aux Quat’Saisons’ to become an inspector on BBC’s The Restaurant alongside Le Manoir’s Raymond Blanc OBE, and as a flamboyant shirt-wearing judge on Masterchef. As well as the Fitzrovia operation, he is a founding partner of the expanding London Cocktail Club collection, and Treboom Brewery.

The kitchens of Pied à Terre have launched an array of top chefs into international orbit, and are today overseen by thoroughly tattooed Greek head chef, Asimakis Chaniotis, who nicknames Moore his “British dad”. Chaniotis’ boldly beautiful plates are available via a range of menus including a wine inclusive set lunch rivalling the offer of that of Le Gavroche, as well as vegetarian and vegan tasting menus, and the seasonal tasting menu using micro suppliers who specialise in “singular ingredients.”

Begin with a cool flute of Sugrue Pierre’s The Trouble with Dreams from the South Downs, alongside irresistibly aromatic bread and Chaniotis’ family’s olive oil. Lunch follows with a leafy vegan salad woven with Turkish figs, caramelised walnuts and Greek verjus, possibly matched with a rested Chenin Blanc from Montlouis (Le Rocher des Violettes), then thyme honey glazed breast of duck from wetlands paradise, Challans with liquorice pepped by venerable, quintessential Bandol (Domaine Tempier). Finish with dynamic Tokaj made to the ‘Fordítás method, being enriched with the surpluses of greater wines, with a millefeuille of forced rhubarb with candied pistachios and elderflower mousse. End with arguably London’s finest cannelé de Bordeaux, a Kopi Luwak coffee, and complimentary Mastiha digestif.

There is also a chic bar with vinyl records such as Travelogue (Human League), and a private ‘Petite Chambre’ (once Moore’s bedroom) in which Baxter provides an intimate wine tasting package. There is the twice-monthly wine experience, too, looking at glass shapes, decanting, cellar creation, including a wine tasting and wine rinsed lunch.

Waiter turned dynamic restaurateur and TV personality, David Moore rose from the role of head waiter of Le Manoir aux Quat’Saisons’ (then unheard of as a Brit) to become a familiar face on TV’s The Restaurant. The kitchens of Pied a Terre, his flagship multi-level Fitzrovia restaurant, chic bar and private dining room (which was once his bedroom) have helped launch a gamut of great chefs into international orbit.

Personable sommelier, Oliver Christie, who resembles a younger version of Michael Mcintyre, and takes time to listen to guests, began his career not in the cellars, but kitchens of one and two Michelin-starred restaurants, ‘which gave me a greater understanding of flavour and perhaps just as importantly, continuity in a meal,’ he says.

At Pied a Terre, Christie has helped create one of the most diverse wine lists in London, with bottles ranging from the late £20s to more than £8,000 (Petrus ’82) from prominent estates over multiple vintages. ‘One of the advantages of being a restaurant with a 26-year history is we do not have to use brokers and suppliers to find fine wine on the second-hand market. The majority of our fine wines were bought straight from the châteaux on release and have been cellared by us in our purpose-built cellars, or off-premises in bond. By housing the bottles properly, we can be sure (as much as possible in the world of wine) that our wines are showing to their full potential.’

As well as high-end bottles, Christie delights in being able to offer more unusual finds, sometimes blind if you wish to play along, such as Slovenian Malvasia, Greek Viognier, Israeli Chardonnay, Quibia from Mallorca, an organic Serbian, and even Uruguayan Marselan. ‘Whether you are a professional, or just like a glass of wine, there will be something to surprise and excite.’

Acting as a global hub for wines, Christie believes the London wine market has never been stronger. ‘This is partly due to the city’s proactive approach to combating fraudulent wines as well as London-based buyers having a sole interest in good wine regardless of where it was produced.’

Despite what Christie terms the ‘inconvenience’ of Brexit, ‘leading to price increases throughout the industry’, he can see a silver lining. ‘Regions offering great value for money will see a surge in popularity and this can only make palettes more diverse and experienced…’

Suppliers are included on a credit roll in the food menu, which also, charmingly features a tracklist of the musical playlist.

Located in the heart of Fitzrovia, the Michelin-starred Pied à Terre was established in 1991, operating under the guidance of David Moore, and is part of Group Pied, which also includes Pied Consultancy and L’Autre Pied, its more relaxed, gastronomic sister restaurant in Marylebone.

Whether it’s a deep-rooted love for the classic French regions, or gems from around the New World, the depth here is outstanding. Service is among the best in town, complementing a beautiful list. In addition, the restaurant also offers set wine flights to complement a meal, from £62, and private wine tastings at its bar, from £55 a person. For £25 corkage, you can even bring your own wines with you. The list starts from a reasonable £27, rising to around £300, with an ample by-the-glass offer that rotates frequently.