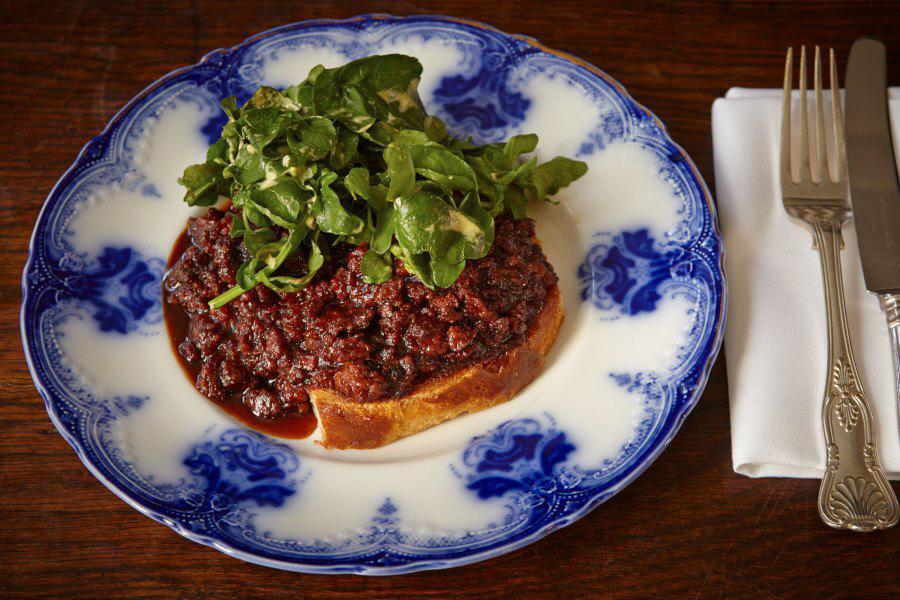 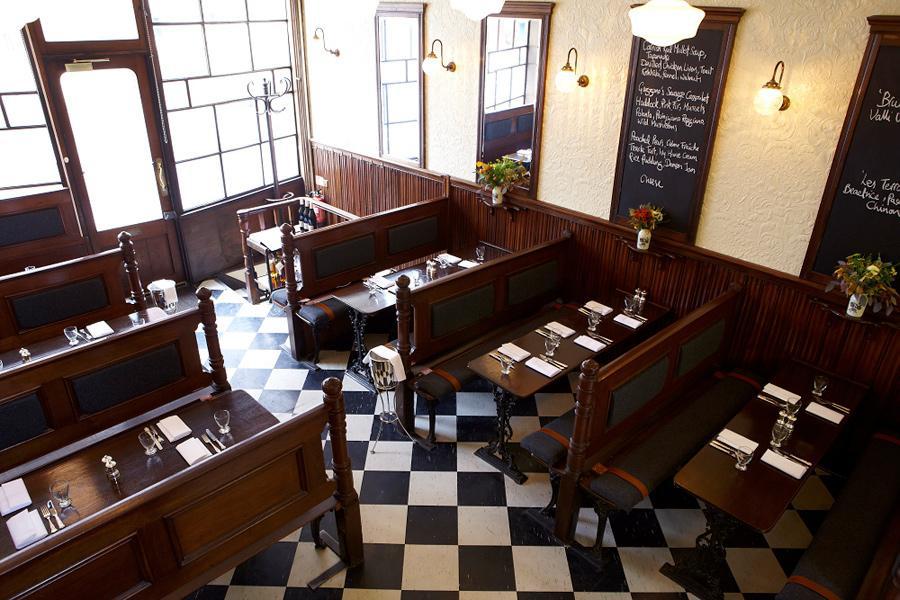 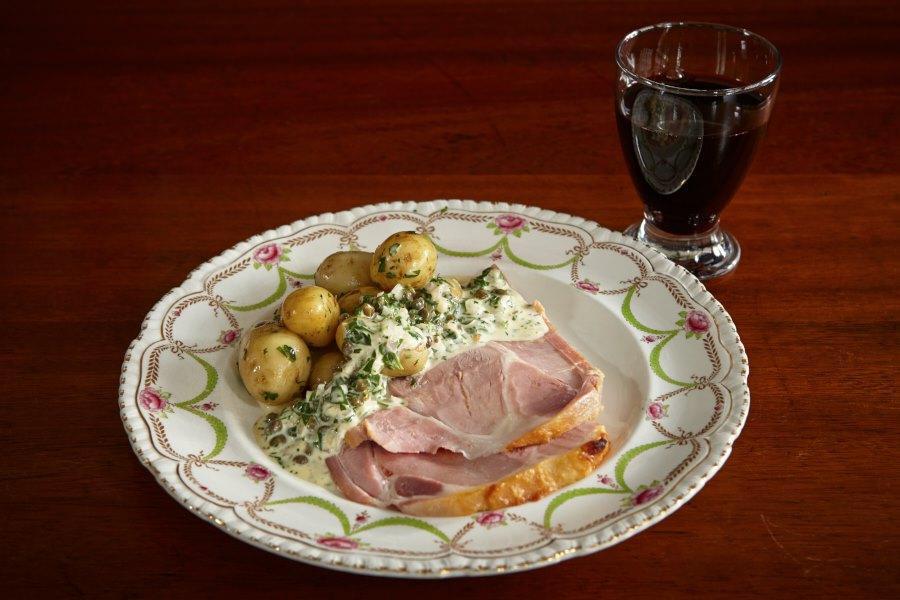 Chris Madden wants Quality Wines to appeal to people who don’t normally walk into wine places as much as to curious sommeliers.

Adjoining the Quality Chop House, a dining room famed for its booths and confit potatoes is Quality Wines. Don’t expect a formal, printed wine list here, advises Chris Madden. Instead, the latest vinous discoveries, numbering 250 options line the “living, breathing shelves” made from former palates. These are available to take home or, subject to a blanket £15 corkage, to drink-in. The light margin enables regular rotation of stock meaning the team can actually show several thousand wines throughout a year.

Madden, who describes 2020 as “the shortest, longest year of my life,” began “bartending, waiting… everything,” at the Quality Chop House before “naturally becoming more involved” at Quality Wines alongside Gus Cluck who recently left to pursue his own import business. The duo “played chicken” with each other when it came to making the often eclectic selection of wines, beers and spirits, “to see how unusual we could get.” Hence the presence of Armenian brandies, Sri Lankan Arak, “mega-retro” amaros, and sambuca “properly stirred down into milkiness”

Madden sources from 80 trade accounts, including Gluck who, in partnership with Richard Bray, boldly founded the “authoritative-sounding” GB Wine Shippers, at the time of lockdown.

Madden likes leading his increasingly inquisitive customers through wines with drama such as, from Slovakia, Slobodne’s La Rose and Le Vampire, a “nourishing” blend of Cabernet and Blaufränkisch which beckons with its “inviting, red hue.” Or Tetramythos’ Roditis from Patras, which is natural without being “weird.” At the other end of the spectrum, you may see Domaine Tempier La Migoua Bandol by-the-glass.

With the menu on Instagram (@qualitywinesfarringdon) dishes by Bramham, who ran street food business, PO Boys, has been “bulked out” in response to demand and may include lardo batutto (beaten) and pineapple crostino, pulpo a la gallego terrine, a truffle and butter sandwich, and pig fat cannolo with whipped ricotta, sour cherry and almond.

Of the appeal of Quality Wines, Madden says, “it’s definitely a unique place, not just about tomes of Burgundy and Bordeaux, but more about challenging and engaging clients and ourselves.”

Expect thoughtful tunes such as The Isley Brothers and Donny Hathaway. Indeed, customers who bought wines during the lockdown were invited to access Madden’s playlists alongside Instagram Live videos led by Gluck.

Before working with the Woodhead Group, which also includes Portland and Clipstone, Madden managed Petit Pois Bistro on Hoxton Square, operated by Happiness Forgets, “engineering their wine list, wine being a mystery to them” and worked at Jason Atherton’s Social Eating House.

When not at work, Madden enjoys visiting Peckham’s Levan and Forest Wine, Walthamstow  as well as undertaking reconnaissance to bars “to try cocktails and craft beers which helps keep the other parts of our offerings progressive.”

“The Quality Chop House list has taken on many forms over the last five years. From being a great destination for the classics of Burgundy, Bordeaux and the Rhône to being focused on natural and biodynamic wines,” says buyer, Rob Bramham, who also authors the lists for minimalist sister restaurants, Portland and Clipstone of Fitzrovia. “My aim is to create a balance where we may only have 15-20 wines by-the-glass, but in there is everything to suit a meal in our restaurant.”

To delight Bramham and earn a place on his lists, a wine must both pair with an item on our menu and have an interesting story. “We want to know all about the winemaker and why the particular cuvée or vintage is important to her/him.”

Bramham’s “lightbulb moment” with wine was the 1976 Riesling Auslese from Dr. Burklin-Wolf. “A guest brought this for a dinner and kindly shared a glass with staff. This was before I had even thought about doing my WSET. The wine was over 40years-old and still tasted vibrant.”

With no restaurant experience, Bramham moved to London four years ago from a small Yorkshire town, working for POLPO Group, “and I fell in love with the industry,” he says.

Finding small, like-minded importers is of prime importance. “We have a great relationship with companies like Cave de Pyrene, Vinetrail, and Howard Ripley. Because what they like, what I like, and what our guests like, all seem to align.”

Next door, Gus Gluck runs the 18 seat Quality Wines, featuring 16 wines by the glass (six via Coravin) with wines from the shelves subject to a modest supplement to drink in. Cluck cites his spiritual home as Australia’s Yarra Valley, “where I lived and worked with Mac Forbes,” though his favourite partner with food was Marco de Bartoli’s unfortified Marsala Vecchio Semperi. “A bottle for an entire meal. From nuts, to a parfait, then grilled meat, and sweet dessert. Drama at its best – could give Helen Mirren a run for her money!”

‘At Quality Chop House we’re still really defining our line-up,’ says James Fryer, who also authors the list for sister restaurants, Portland and Clipstone of Fitzrovia. ‘Of all three restaurants, it has a really interesting divide in tastes ranging from fairly classic (Bordeaux, Burgundy) to the completely left-field (fizzy Gamay and friends). It’s really interesting to see how these contrasting styles can occupy the same short format wine list and how we approach them in service…’

Begin with Fino or Amontillado from small sherry house, El Maestro Sierra, or sparkling Parellada, Muscat and Gewürztraminer, Vatua! by Colet (Penedès)sparkling Parellada, Muscat and Gewürztraminer, Vatua! by Colet, then choose from the section, ‘Today’s Favourites’, being ‘wines that suit the menu, the mood & the weather’, such as Heymann-Löwenstein’s Kirchberg Grosse Lage Mosel Riesling, described as ‘Diesel & grapefruit pith with serious mineral drive’, or, from ‘Leftfield’, a pink Calabrian (Acino, ‘Asor’). Alternatively, make very merry with ‘The Single Bottle List’ featuring ‘bin-ends, curiosities and mix-creants’ which could include, punching well above its Petit categorisation, Dauvissat Petit Chablis, aged Condrieu from 1999 (Rene Rostaing, La Bonnette) and lush 1998 Dalla Valle Napa Cabernet.

Fryer took his Damascus sip at Melbourne’s Florentino under the guidance of head sommelier, Mark Protheroe. ‘From there, I tried to immerse myself in the local wine scene and even managed to produce a couple of bottles – nothing of great note, I was always just happy to have not made vinegar!’ he says. He also worked at Hammersmith’s River Café ‘with the wonderful Katie Exton (now of Lorne).’

To delight Fryer and earn a place on the list, a wine must first excite him. ‘I understand that’s a very non-specific and un-definable thing to say, but there’s always that light-bulb moment.’ Secondly, a wine must sell. ‘There’s a lot of value to recognising your crowd. After all, it’s them who foots the bill after all!’

Early 2018 sees an expansion of the footprint including a café, incidentally.

Indeed, the value-quality ratio here is notably high, offering some seriously good drinking at very fair prices – which is what you might expect from a venue co-run by Will Lander, son of wine writer Jancis Robinson and restaurant critic Nick Lander. Numbering around 70 wines, the list is, in the restaurant’s words “a broad church”, without specific focus but ably reflecting some of “the world’s most interesting wine regions and styles” right now.

At the time of writing, a £21 per bottle of Château Thenac from Périgord may be the best red in town at that price point, helping tame chef Shaun Searley’s generous, protein- led dishes, which may include Hereford mince and dripping toast, as well as confit potatoes.

The list is simply laid out, easily navigated and unintimidating – despite comprising a collection of fairly serious producers – frequently refreshed and delivered in one of the most atmospheric and friendly places to dine in London: a potent combination.