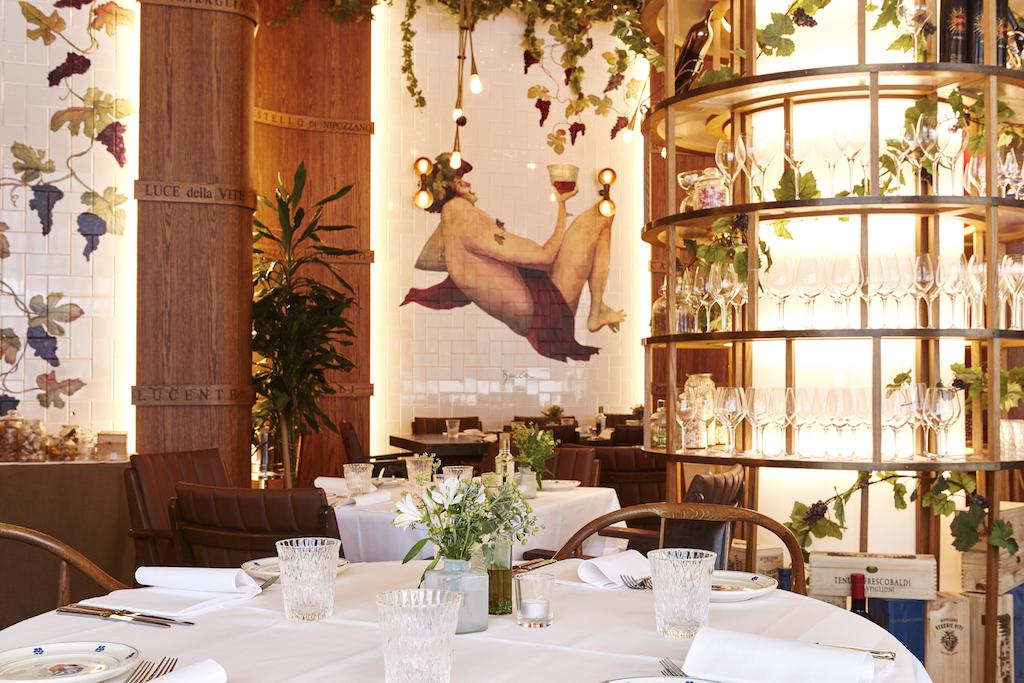 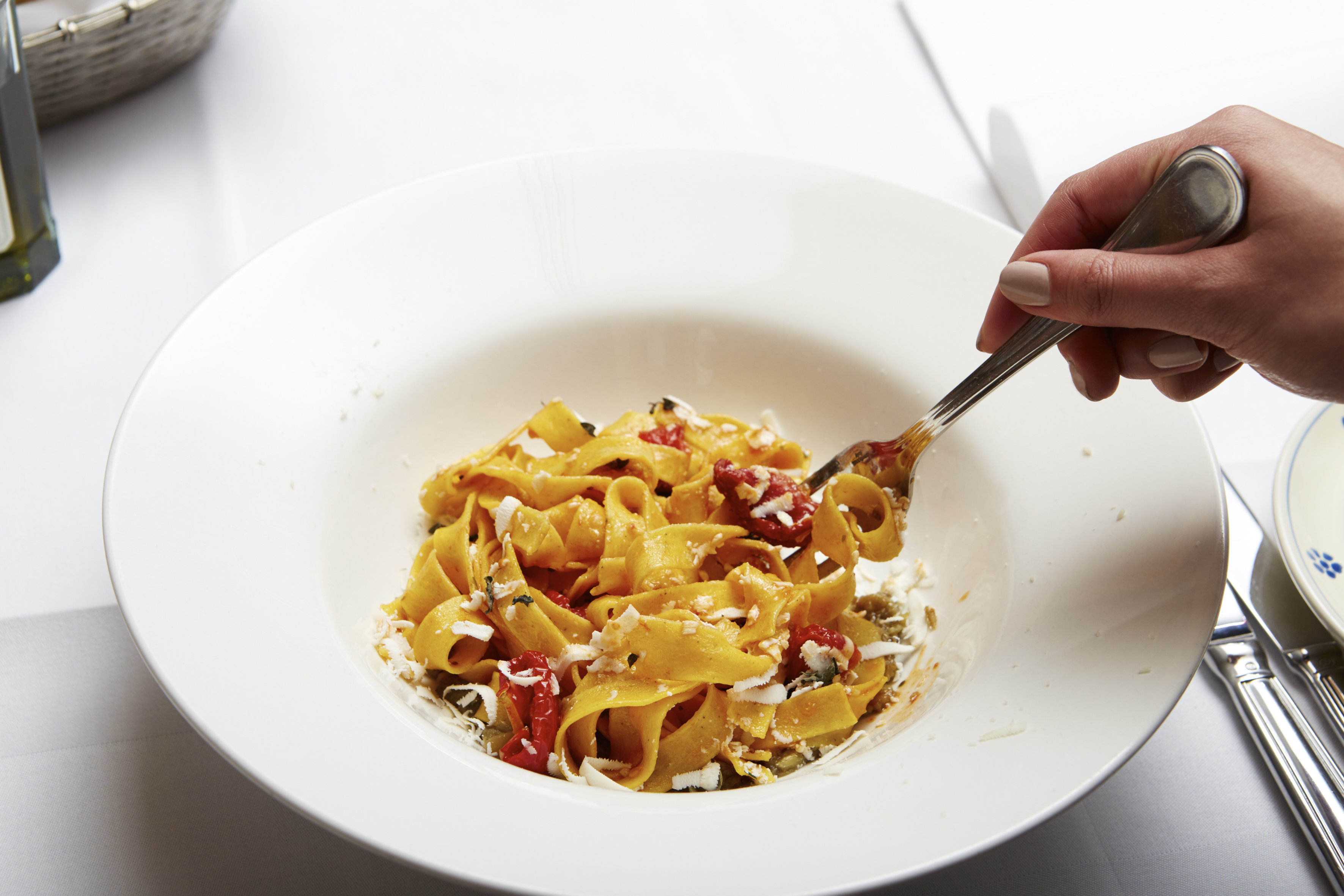 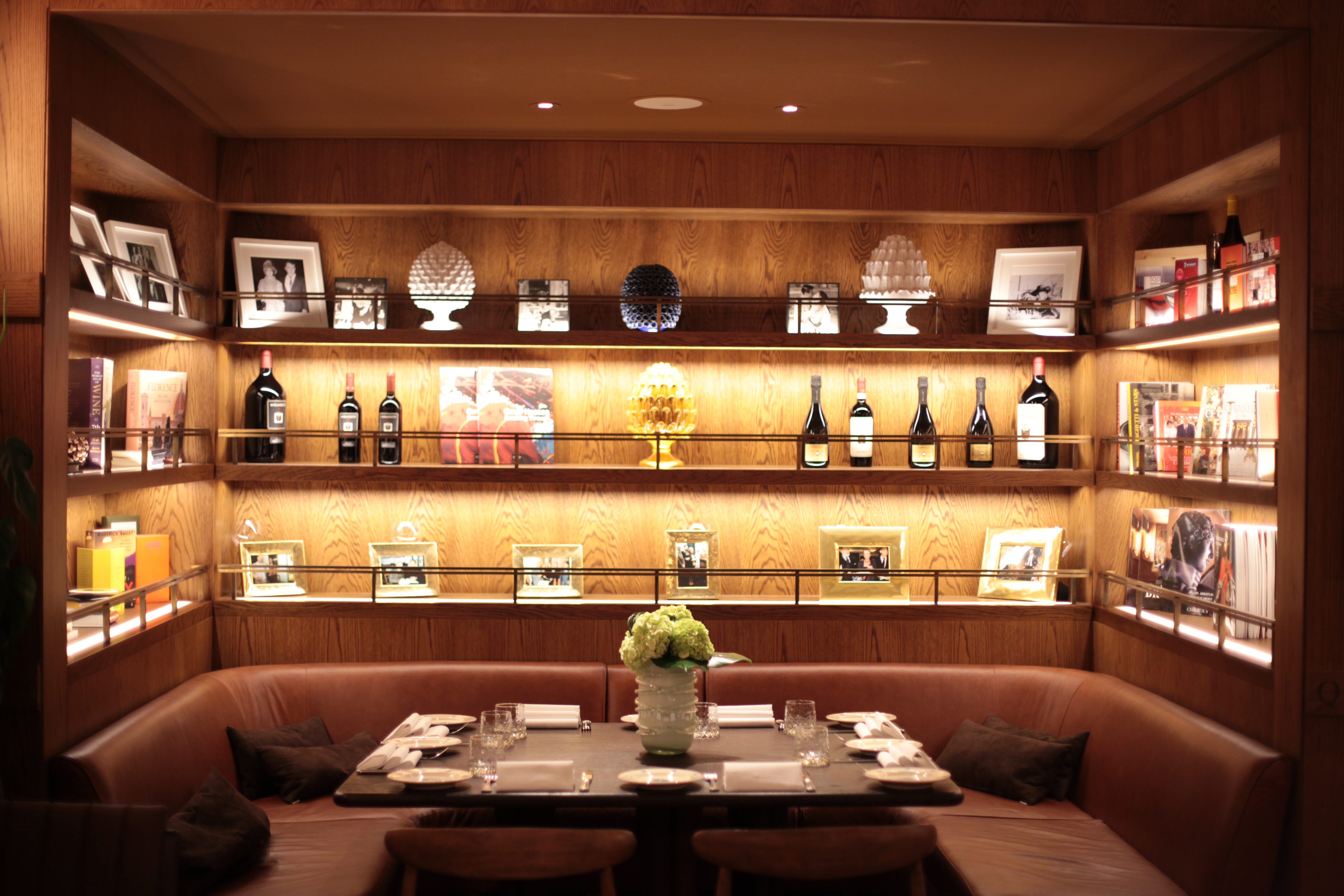 Launched in 2014, this is the first collaboration between the Frescobaldi family and operators, Good Food Society, who since opened a Florence sequel and also run, in London, Hovarda, Playa, Yosma and Caffè Cinquanta.

Despite its large and colourful frescos of Bacchus, Ristorante Frescobaldi offers a “quiet moment from the rush of Regent Street,” according to Madeira-born GM, Nelio de Abreu. It reopened with a new set lunch and tasting menu, available throughout the restaurant including the redesigned “sexy, jazzy” terrace.

Come for often rare formats from the estates of the Frescobaldi dynasty, often sourced directly from Diana Frescobaldi herself, such as Montesodi 1985, the second vintage of the single cru Sangiovese, safely secured within the glass-fronted cellar.

Indeed, the majority of wines are produced at Frescobaldi estates, including Nipozzano, Castelgiocondo, Castiglioni, Pomino and Ammiraglia, as well as collaborations such as Gorgona, a white wine made in collaboration with the prison on the Tuscan island to help provide skills to prisoners towards the end of their sentence for an easier reintegration into society.

Initially fascinated by “electronics” de Abreu made hospitality his lifelong career from age 16, with highlights including George Club which he managed, 34 which he helped open, as well as Bonds at Threadneedles, The Ritz in London and, separately operated, The Ritz in Madeira and its then sister hotel Bishopstrow Hotel & Spa in Warminster, The Berkeley, Mandarin Oriental Hyde Park, The Landmark under “man of many personalities” John Burton-Race, Auberge du Lac, Chewton Glen and The Grove. Given such an illustrious CV, de Abreu does now wish he had written his “memoirs” during the lockdown.

Widely used in the restaurant, Frescobaldi’s Laudemio olive oil can be so fresh that it has an emerald colour, tasting “like biting into newly-picked olives,” says de Abreu. Both this and some 30 wines are available to purchase from the restaurant’s website or in person.

De Abreu, who benefits from “daily meditation” believes “running a restaurant is not like running another company,” especially given the need, more than ever, to “multitask.” A “big football fan” de Abreu compares restaurants to the beautiful game. “Once you play in the premier league, don’t want to play in the championship; it’s harder but more rewarding.”

Tucked away off Regent Street, this – despite the omnipresent garish frescos of Bacchus – refined restaurant, bar and terrace offers often rare formats from the Frescobaldi dynasty, sometimes sourced directly from the estates, such as the first bottle of 1985 Montesodi single cru Sangiovese, which may be seen in the glass-fronted cellar.

The family’s presence through history is reinforced in the introduction to sommelier, Fabrizio de Fenzo’s 20-page list: ‘1,000 years of history, 11 estates, more than 80 importers, the Frescobaldi Family has been narrating the history of Tuscany for over 1,000 years. Their wines were welcomed into the prestigious Renaissance and Papal Courts and the English court of Henry VIII…’

Up-to 80% of wines are procured from under the Frescobaldi mantel, including Castelgiocondo, Luce della Vite, Castiglioni, Ornellaia and Masseto. Note the white wine born out of a collaboration between Frescobaldi and the prison on the Tuscan island of Gorgona, ‘teaching prisoners important skills which may be used at the end of their detention for an easier reintegration into society’ says de Fenzo.

Downstairs, the softly-lit, clubby bar and tasting zone below with wine label art on the walls by the late, great Valentino Monticello, features a shiny cocktail list, including the ‘Amare’ (Amaretto, bourbon, camomile and lemon juice).