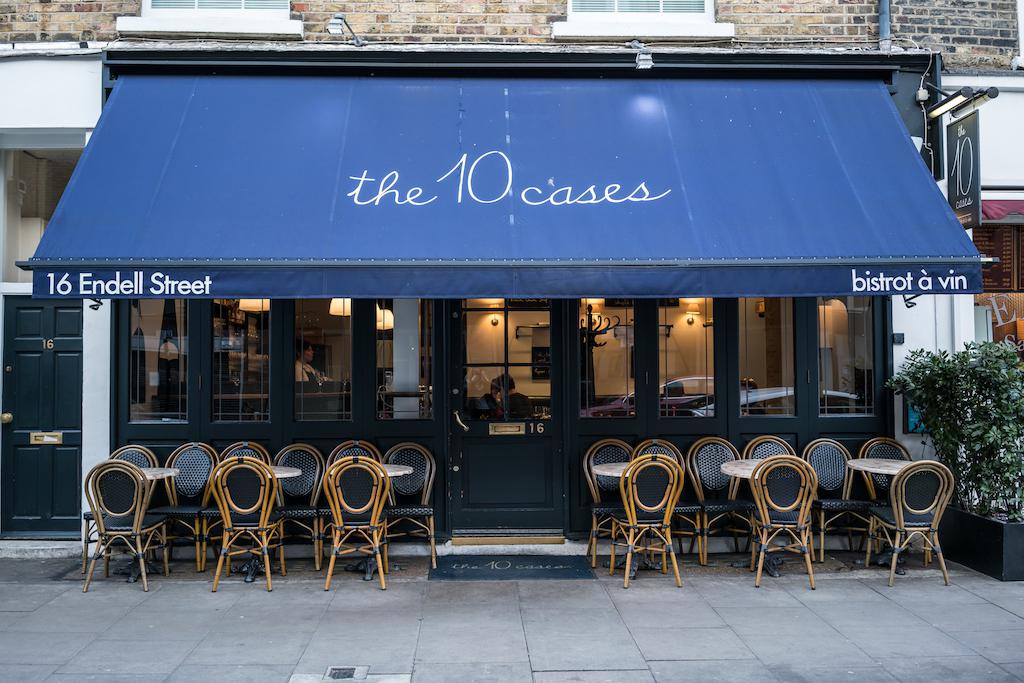 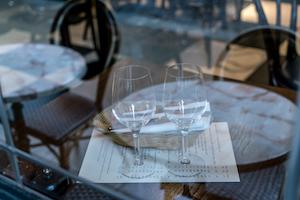 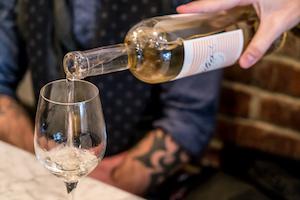 Bustling, The 10 Cases Bistrot serves an ever-changing selection of wines bought in 10 case permutations, while the Cave á Vin wine shop and bar next door has a more voluminous list.

Pitt is joint wine manager for the Bistrot à Vin and adjacent Cave á Vin. These were opened by friends, Will Palmer and Ian Campbell to challenge the observed formality and excessive mark-ups they encountered elsewhere in London.

Neatly, the Bistrot’s list highlights 10 white wines, such as the Muscat/Assyrtiko Greek Connection (J. Ligas), 10 reds (Cabernet Franc “Seaside” Geyer Wine Co. Barossa), plus fizz, rosé, sweet wines and the odd sake, all available by the glass, carafe and bottle. The USP being, wines are only every purchased in 10 case orders. “It’s a fantastic, huge challenge to compile that list,” notes Pitt, recalling the purchase of old vine Tempranillo from Pisa-proximate vineyards which “vanished” after just two weeks on the list. “Before I happened upon that wine, I’d met a customer who was convinced Tempranillo came from Italy and, in disbelief, I’d tried my hardest to keep a straight face…”

Alongside, dishes by head chef, Chris Mathias, who earned his spurs in France and Canada, show “simple plating” says Pitt, being “French in style and really flavour-focused.” These might include snail and roast garlic feuillant, smoked Morteau sausage with Puy lentils, and a brilliant coq au vin, followed, perhaps by espresso trifle with mascarpone and honeycomb.

Opened two years after the Bistrot in 2013, the Cave á Vin wine bar, shop and cellar offer the same plates as the Bistrot, albeit on a walk-in only basis come evenings. Here, the list is, at 300 bins, more voluminous and offered at retail price to take-away or subject to a modest £15 corkage to drink within.

Bottles are often matured in the venue’s substantial cellars, “and a lot of stuff won’t see the list for quite a while,” says Pitt. Preference is given to low intervention producers. “When I first started in restaurants, I wasn’t focused on sustainable viticulture, but The Typing Room proved to be an eye-opener, being very focused on natural wines.” Pitt insists he has “learnt to identify wine faults – and if something sticks out, I can’t buy it.”

Before lockdown, Pitt visited Eastern Austria’s Burgenland. The trip, “organised off my own back,” revealed how much he “really liked Blaufränkisch” as well as the country’s minute production of Furmint.

Be sure to visit sister seafood restaurant, Parsons, over the road for happy hour oysters at the window counter.

When not working, you may find studious Pitt reading wine books, or enjoying the spoils of “buzzing” Shoreditch.

To his relief, during the lockdown, Drop, which is the venue’s wine delivery arm, was “going great guns,” says co-founder, Will Palmer.

“Being a trusted institution, we are very lucky to have guests who are open to trying new things. In fact, the question we are asked most often is, ‘What do you like at the moment?’”

Richard Davis is Wine Buyer and GM at Covent Garden’s The 10 Cases Bistrot and terrace, and Cave á Vin next door, opened in 2011 by friends, Will Palmer and Ian Campbell to challenge the perceived formality and excessive mark-ups they encountered elsewhere in London. Straightforwardly, the Bistrot’s list features 10 white wines (such as Malvasia Puntinata, Marko Cerqua) and 10 reds (Field Blend, Fred #1, Strekov, Slovakia NV), plus fizz (Australian Glera), pink and sweet wines and the odd sake, all available by the glass, carafe and bottle. The USP is wines are only every purchased in 10 case orders.

Alongside, dishes by head chef, Cathal O’Malley may include pigeon with wild mushrooms and pappardelle to begin, followed by fillet of cod and brandade with quail’s egg and kohlrabi, then bergamot pannacotta with the buttery, syrupy goodness that is Greek kataiﬁ. Davis prefers not to place excessive emphasis on food and wine matching. “Nothing beats charcuterie with wine,” he says. Hence the selection of peppered pork, air-dried Cecina, Jamón de Teruel and Chorizo Ibérico.

Cave á Vin, a wine bar, shop and cellar, opened two years later, offering the same menu at The 10 Cases, albeit on a walk-in only basis come evening-time. Subject to a “more conventional buying program”, the list is more voluminous at more than 300 bins, offered at retail price to take-away or subject to a modest £12 corkage to drink in. Davis, Palmer and Campbell are fortunate to be able to raise wines in their own cellars.

Broadly speaking, both lists give preference to lower-intervention wines, says Davis. “I am very much from the school of working back from what’s in the glass, which more than likely comes from producers who respect their land and focus on representing their terroir.”

Davis mentions his favourite grape is Syrah, with expressions at the Cave á Vin from Australia, New Zealand, South Africa, Spain, the USA, and the Northern Rhône, “where my heart lies,” he says.

Of his suppliers, Davis favours Uncharted, “who are bringing in some incredible gear and have a clear, perfectly executed vision.” He also found the visit to Tuscany with Bibendum “fascinating” an opportunity “to get under the skin of a region I hadn’t been to before.”

When not at The 10 Cases, find Davis at his “old stomping ground”, Sager + Wilde which he describes as “like a candy shop”, or Levan, for its “stunning selection of Jurassic wines.”

Be sure to visit sister seafood restaurant, Parsons, across the road for oysters at the window sill counter and people watching.

Wine Buyer and GM, Gus Pollard, gives context to Covent Garden’s 10 Cases Bistrot and Cave a Vin, opened in 2011 by friends, Will Palmer and Ian Campbell. ‘Fed up by static, predictable and overpriced wine lists, they decided to open a place with a fairly priced, constantly changing, unpretentious and fun wine offering.’ The result is a ‘buzzing and unpretentious little restaurant, built around a list of ten white, ten red, sparkling, rosé and sweet wines, all of which is available by the glass, carafe and bottle, and purchased always in 10 Case orders.’

In seven years of trading, the same wine has not been listed twice, Pollard confirms, ‘even with vintage changes, which makes the wine buying role a lot of fun.’

The food menu also shows an enquiring mind, built around three starters, such a prawn and jamón risotto with puntarella, three mains, such as tandoori cauliflower with quinoa and smoked cheese, or rack of lamb with Dauphinoise gratin, and three puddings, as well as a range of wine-inclined tapas type dishes and daily specials ‘with a vast and broad European influence.’

In 2013, the team undertook the logical expansion of opening the Cave a Vin wine bar, shop and cellar next door. ‘Offering the same menu but on a walk-in only basis, the wine list is what sets the Cave distinctly apart from the Bistrot.’ Here, another 16+ regularly changing fine wines are offered by the glass as well as 300+ listings by the bottle, offered at retail price to take-away or to drink in with an additional £12 corkage. ‘We may be located in Covent Garden but we aim to offer the best value drinking in London.’

Pollard, Palmer and Campbell are fortunate to be able to raise wines in their cellars. ‘We are conscious of not wanting to only list current vintages and really appreciate great wines with a bit of bottle age so lay down products – in 10 Case parcels or smaller.’

Be sure to check out sister restaurant, Parsons, too.

A lovingly put together wine list in an enclave of good drinking on the edge of Covent Garden. Something of a wine geek destination, 10 Cases is a two-sided affair consisting of a ‘Bistrot à Vin’ and a ‘Cave à Vin’.

The Bistrot à Vin is a small restaurant ( a monthly changing menu of modern European fare) with a short wine list: 10 white, 10 red, one sparkling, one rosé and two sweet wines. As the company name suggests, they only purchase 10 Cases of any one wine. Once a wine has sold through, the list changes – so the same wine will never be listed twice. Everything is available by the glass, carafe and bottle. As well as an eclectic range of fine artisanal drops, there’s an eyebrow-raising selection of magnums and an excellent range of sweet stuff. In short: something for everyone to discover.

The Cave a Vin is a wine bar and shop with a dynamic 150+ selection of great wines from all over the world at all price points, aiming to offer the best value wine list in London available to drink in or take away. The overall aim here is to give guests access to incredible wine at the best price in a relaxed, fun atmosphere. And it’s true that, for such a central location, the feel of the place is like a homely neighbourhood hangout. Retail sales at the wine bar ensure the fun can continue once you leave.

Sommelier: Will Palmer and Ian Campbell