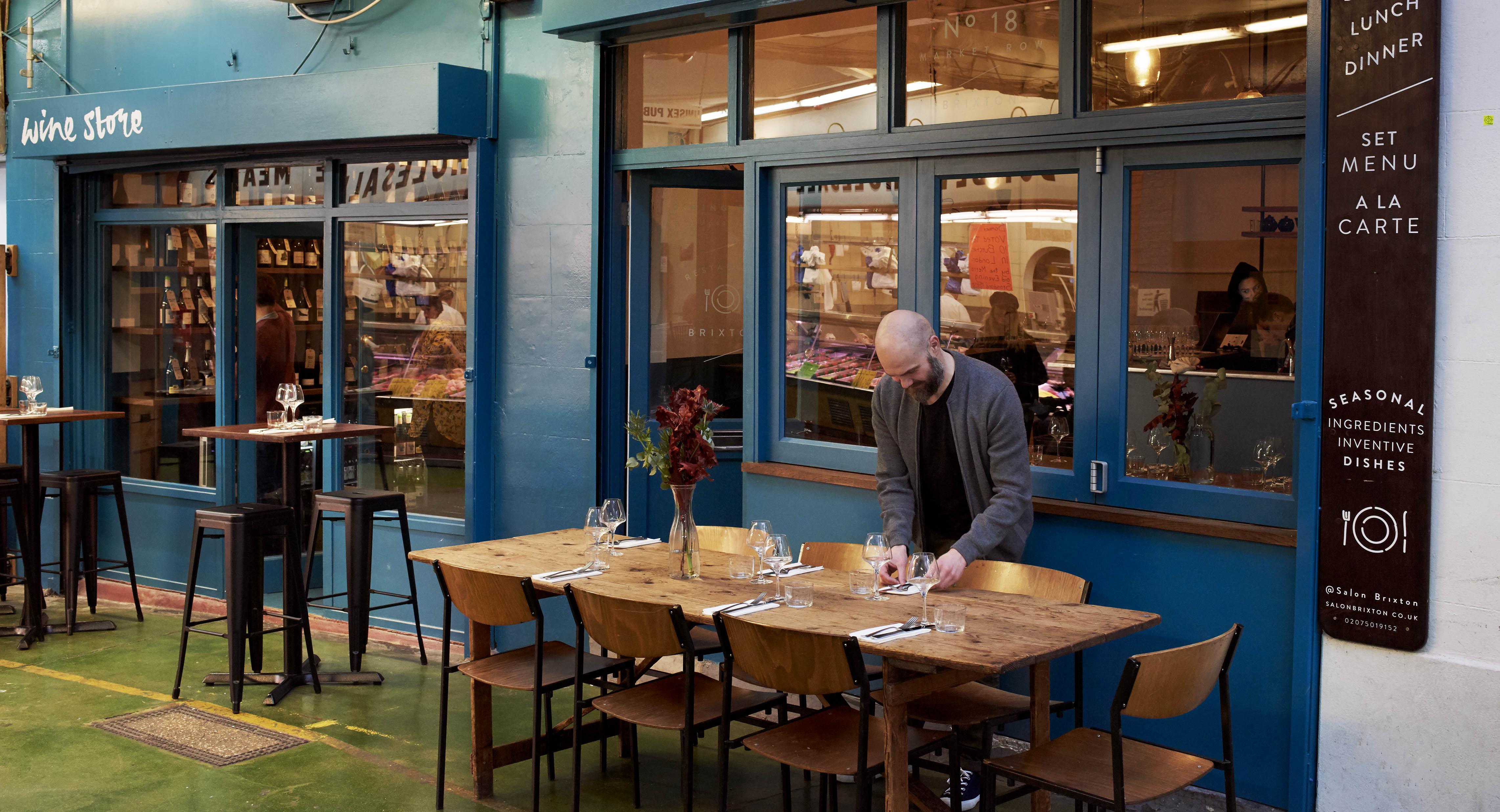 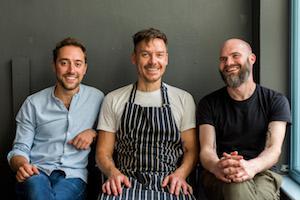 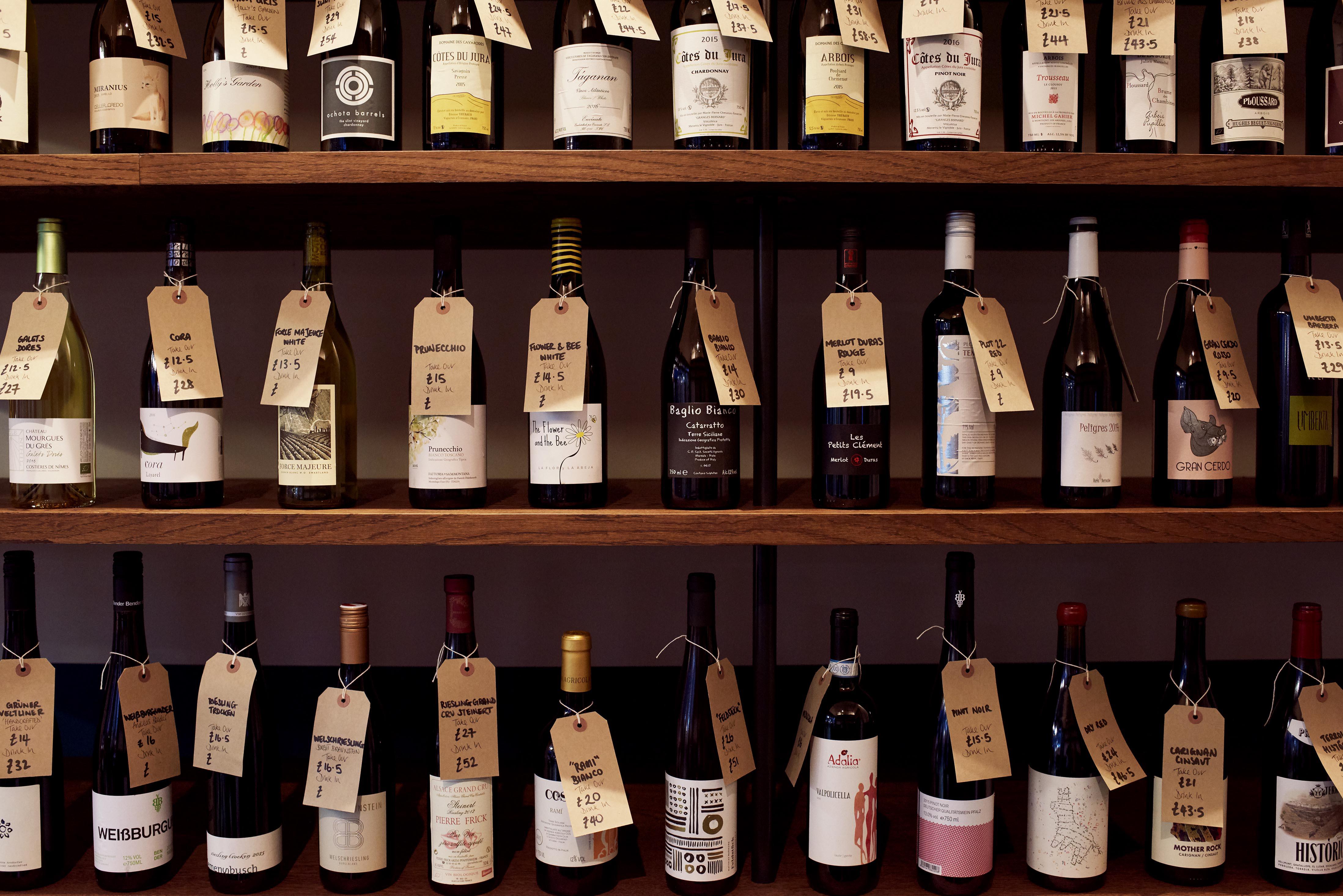 An inspiringly exciting approach is taken to low-intervention wines at Salon, often over a buzzing series of events in the adjacent Wine Store.

“Like a good vintage, Salon is getting better and better,” says Mark Gurney of the now seven-year-old excellent date spot in the heart of Brixton’s Market Row. Gurney, who describes himself if pushed as “a wine cherub” rather than sommelier co-founded Salon, which began life as a pop-up over a cheesemonger in Brixton’s Market Row, with Matt Bushnell (formerly of Oklava, Shoreditch) and chef, Nicholas Balfe (who worked under Isaac McHale at the initial Clove Club at the Ten Bells). Previously, Gurney switched to hospitality from music consultancy marketing, becoming general manager at Café Murano under Angela Hartnett who fostered his interest in the wine list.

Predilection is for low-intervention wines, echoing what Gurney notes is his guests’ increasing curiosity into orange and natural ferments. This results in listings of finds such as the litre of bright pink skin-fermented Falanghina (Progetto Calcarius).

Salon’s “global” approach “works nicely in tandem with the adjacent, now bedded-in, Wine Store’s selection,” notes Gurney. Memorable events in included the “Wine Up” session where a range of bottles, perhaps including the punt-free, richly petrol-scented Domaine Bohn’s Les Copains d’Abord Sylvaner, hitherto unavailable to lips outside of those of the producer’s family, are uncorked for a modest entry fee. Of the wine, Gurney says he recently, “fell in love with Alsace area and its fascinating, crazy microclimate and limestone, clay, schist and granite terroirs heading down the mountain range.” Meanwhile, the “South London institution” that is Strictly Bangers is a “far-from-stiff” cult celebration of wine and vinyl for “friends, peers and colleagues.” Pre the lockdown, Gurney started the “Familia” series. Held in Salon’s dining room and kitchen, an eager front-of-house team member partners with a chef to create and explain a four-course menu bravely matched with such delights as a British beer drawn from an authentic Lambic tank and local Gosnell’s special edition gastronomic mead.

Wholesome dishes may include fried peppers with mint, tahini and grated hazelnut, then Sussex cross lamb with winter tomatoes and goat’s curd, as well as outstanding gougéres, and baked from toasted rye, some of London’s most irresistible bread.

Care too is given to aromatised wines, such as the keg of vermouth best served with soda and orange slice, and sustainably packaged spirits including Victory green coffee enriched vodka, a hopped gin and also bitters crafted by indie infuser/blender and friend to Salon, Max Chater.

For a depthful focus on wines from the geology of the Jura, head to Salon’s sequel, Levan a short bike or train ride away at Peckham station.

During the lockdown, Gurney says he “dusted off old tricks,” becoming “a wine delivery maestro. Much fun!”

Beginning as a pop-up over a cheesemonger in Brixton’s Market Row, Salon grew into a permanent restaurant, bar and adjoining wine shop, purchases from which may be liberated within Salon subject to modest corkage. Predilection is for low intervention, organic, biodynamic wines, echoing what co-founder, Mark Gurney notes is his guests’ inquisitiveness about orange wine and “natural” wine, “which has been bubbling through gently.”

He adds: “An openness to wines that aren’t typical of the style or grape, effervescence, volatile acidity and reduction are all things that some customers are getting less afraid of and learning to appreciate in a wine context.” This results in listings such as skin-fermented Sauvignon Blanc from The Hermit Ram, “which is as far from a supermarket Sav B as you can get. It’s wild and has attractive notes of cat piss. And every time I sell one, I tell the customers this. They love it!”

And then there is “the little black book”. Gurney explains: “I’ve never been a fan of the quite exclusive term Fine Wine, but still love to offer interesting producers with older vintages who are, broadly, more classic in their style and approach.” Hence this “Extras” list, “full of more classic wines – Burgundy, Bordeaux, Rhône, Alsace – with a little bit of age and at honest prices. For example, we have a stunning Super Tuscan 2004 Ornellaia on for a bargain third of the price compared to most central London restaurants!”

Compared to Levan, Salon’s “more global” approach, “works nicely in tandem with the Wine Store’s selection.” Selections are ideally encountered through Salon’s wine flights, with one of Gurney’s favourites been El Maestro Sierra PX sherry with goats milk cheesecake, blueberry and oats dressed in blueberry vinegar. “A nightmare to pair with most dessert wines because of the vinegar’s acidity. But it works on a number of levels: the PX is beautifully cut by it, the raisiny elements on the PX echoed the blueberries and the rich syrupy mouthfeel layered on top of the creamy goats’ cheese. Banger!”

Gurney co-founded Salon, then Peckham sequel, Levan with Matt Bushnell (formerly of Oklava) and chef, Nicholas Balfe (who worked under Isaac McHale at Clove Club at the Ten Bells). He switched to hospitality from music consultancy marketing six years ago, rising fast from waiter to GM under Angela Hartnett, who fostered his interest in the wine list. I realised the best way to understand it was to drink a lot of the stuff…”

Nestled in the heart of Brixton’s market row is Salon restaurant and Wine Store, the project of Matt Bushnell (fomerly of Oklava), chef, Nicholas Balfe (who worked under Isaac McHale at the Clove Club at the Ten Bells) and Mark Gurney, who switched careers from music consultancy marketing five years ago. ‘I got my first job in hospitality with Angela Hartnett as a waiter and was lucky enough to rise through the ranks pretty quickly, leaving as GM three years later,’ he recalls. ‘I was keenly involved in the wine list over that time, and realised quickly that the best way to understand it was to drink a lot of the stuff.’

Salon is built on three pillars of quality, approachability and fun, says Gurney. ‘We won’t put things on the list which are wild, funky or natural just for the cool factor – my customers don’t care if it’s whole bunch carbonic bloody maceration. They just want to know it’s delicious, or will their mum like it over Sunday lunch. Then there has to be balance in the offering; light and crisp to full and rich etc. This is as much for the customer as for our team who can help them navigate the list easily.’

Gurney and his team give preference to low-intervention, ‘natural’, organic and biodynamic winemakers. ‘We’re big fans of producers. Angiolino Maule, Meinklang, Commando G and Le Coste – with a smattering of classics, like Isole e Olena, Dujac Fils et Père and Château Branaire-Ducru who pop up on our small, but perfectly-formed classics list. ‘

Salon’s by-the-glass list is intended to be approachable and affordable. ‘Value for money is key in Brixton Market surrounded by fast food outlets, all between £5-8. Then we have something a bit more special via Coravin upwards of £12 per glass,’ says Gurney. ‘Recently, we’ve had things from Le Grappin ,Tom Shobbrook and Bow & Arrow.’ Of Bow & Arrow, Gurney mentions he has ‘fallen in love’ with its region, Oregon, ‘including Kelley Fox – and it was great to strengthen the list with some wonderful skin contact Sauvignon Blanc from Minimus.’

Such wines may be savoured alongside Nicholas Balfe’s dishes, which may include duck tortellini in a broth, Mrs. Butler’s mutton with potato cakes and Savoy cabbage, and rhubarb, almonds and hay ice cream.

Gurney enjoys wine trips, including the mountain range of Sierra De Gredos, ‘to see the Commando G guys,’ a mini tour of the Loire ‘with Wines Under the Bonnet’, and reconnaissance to Paris ‘for wine bar/ shop inspiration from those suave Parisians – and to drink some killer grower Champagne.’

In terms of literature, Gurney recommends Robert Walter’s ‘brilliant’ Bursting Bubbles book on Champagne. ‘A true eye-opener. And I’ve been dipping in and out of Dr. Jamie Goode’s Wine Science. I’m also halfway through Bianca Bosker’s both hilarious and fascinating Cork Dork.’ He also subscribes to Noble Rot Magazine, ‘and dream one day of writing something for them about how my addiction to buying vinyl has permeated my approach to discovering and enjoying wine.’ On that note, ‘Strictly Bangers’ occurs every first Thursday of the month at Salon. ‘We invite friends with both restaurants and a vinyl collection to crack open their favourite wines and play their records. Guests can taste any of the wines being poured for free. And then buy a glass for £5 (bargain!)’

The adjacent Wine Store, featuring events such as volcanic wine versus those from high altitude, has enabled Gurney to expand the offer in the restaurant, subject to a modest corkage.