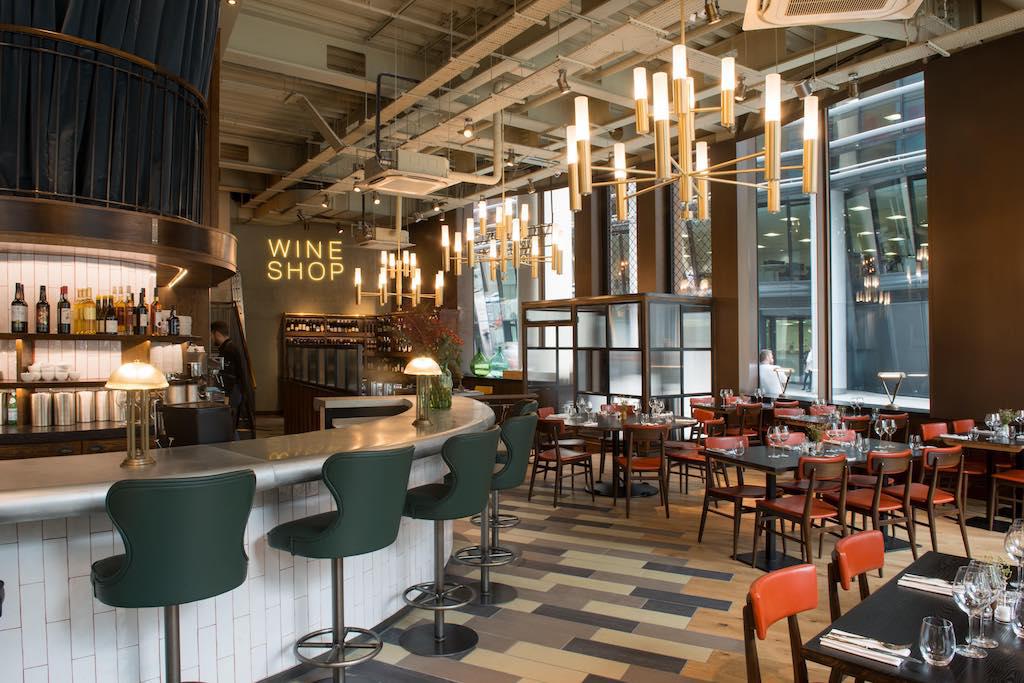 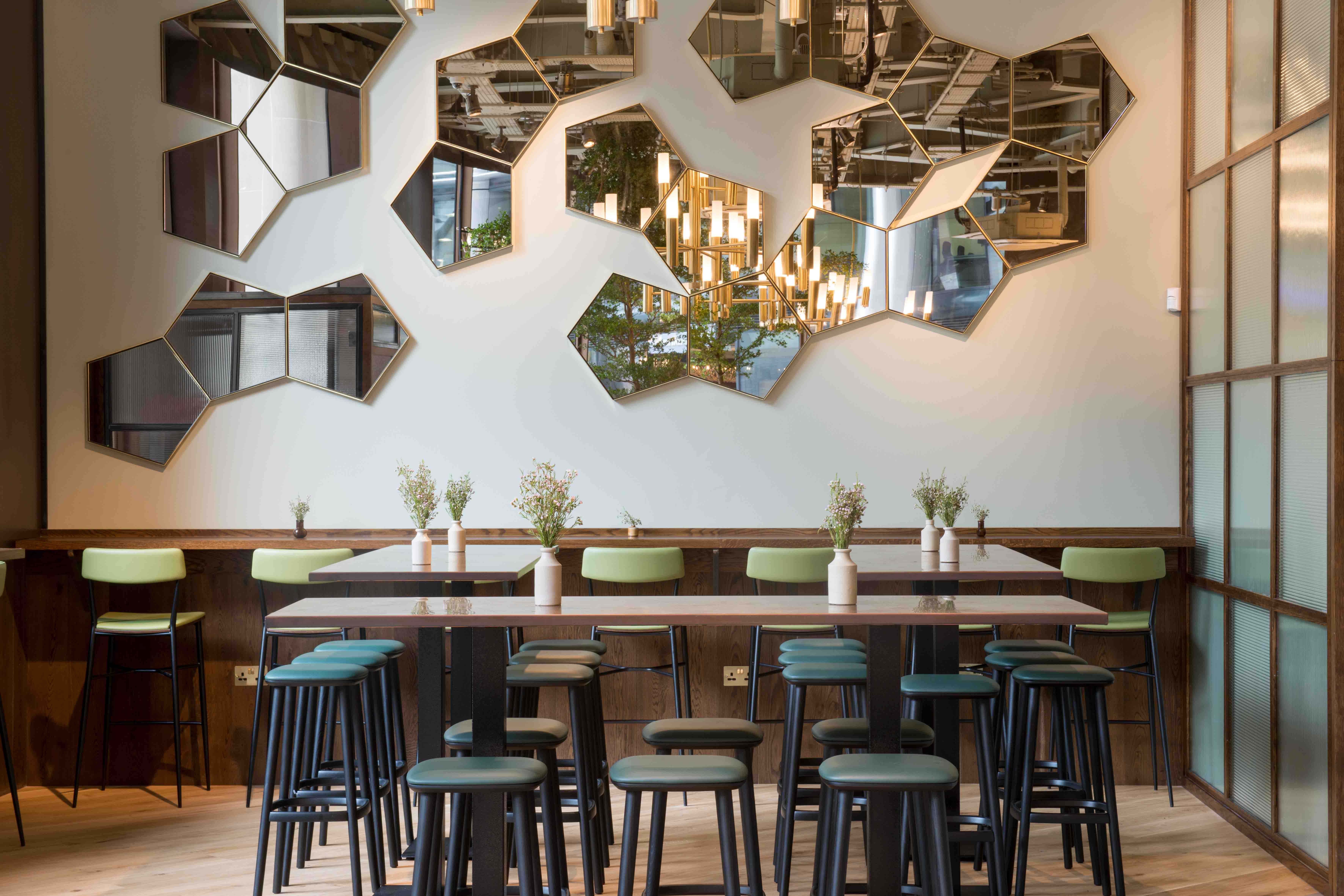 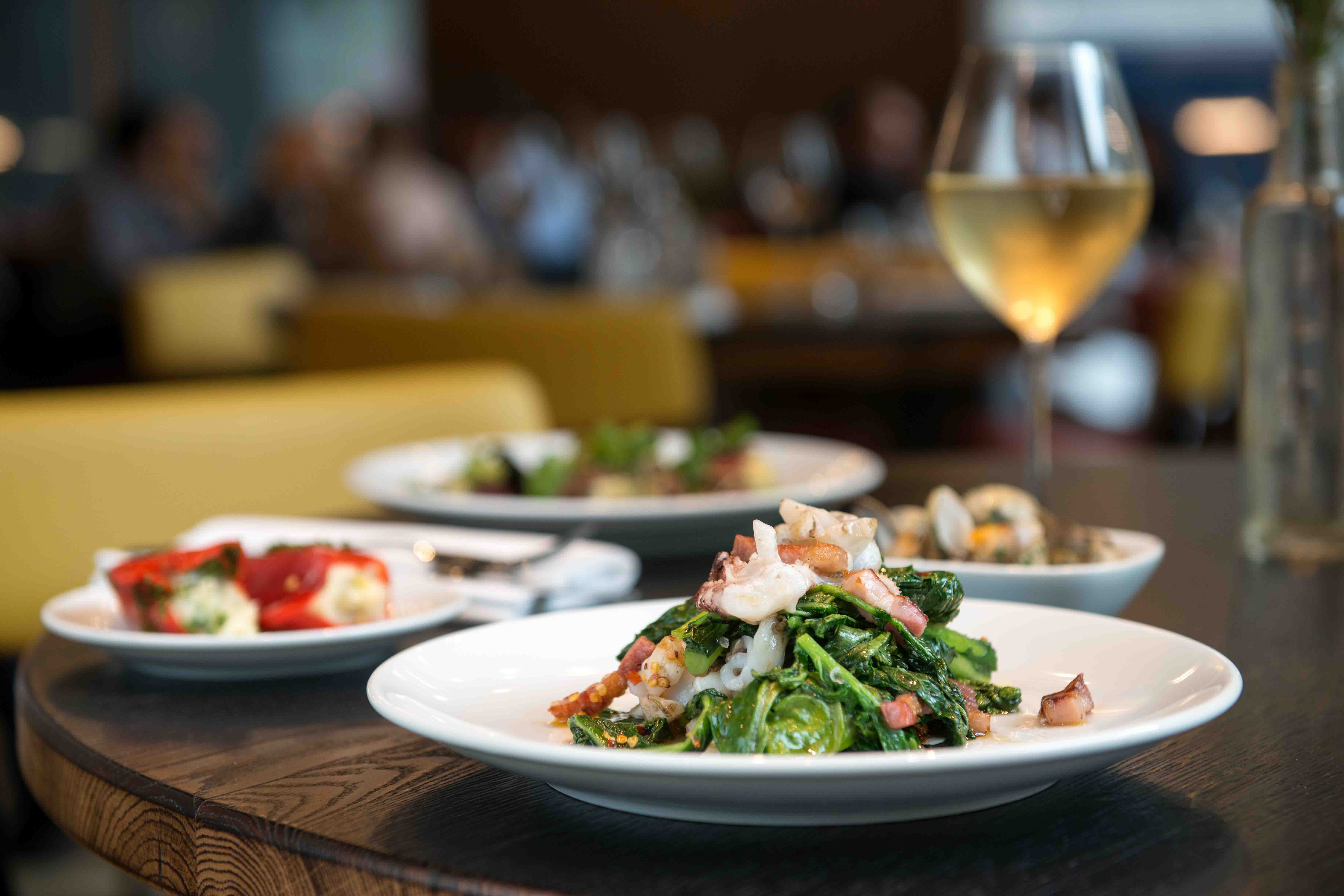 Brett Woonton and Charlie Young met at Liberty Wines, opening their first Vinoteca wine bar and shop diagonally opposite to St. John restaurant five years later, brim-full of wines “with personality.” It took a further five years for the second site to materialise in Marylebone. “Having such a long hiatus gives you a chance to build resources and skills at your own speed, including quality staff, business knowledge and funds,” says Woonton. Each of today’s five branches has its distinct personality, with “breakfast wine” doing well at the Kings Cross site, for example. “People love a little glass of breakfast Champagne to start their holidays before getting onto Eurostar,” says Woonton. Featuring foilage and curvy of frontage Vinoteca City at the Bloomberg Arcade was one of 10 operators selected by Bloomberg’s food writer, Richard Vines and consultant, Nick Lander.

Although guests still request “the classics,” particularly in the Square Mile, Woonton and Young introduced a monthly “wine paddle” foregrounding three 50ml tasters which, says Woonton, “convert nicely into a glass or even a bottle to take away of a wine which would have never have been on their wine radar, like Mestizaje Blanco, a wild yeast blend of Merseguera, Viognier and Malvasia from Valencia (Bodega Mustiguillo).” Of natural wines, Woonton specifies, “as long as all the fault funk is in check and the characteristics of the grape varieties are on show, then, Christ can join us.”

Particular consideration is given to the playlists within the micro-empire of Woonton and Young. “There’s nothing worse than having a glass of nervy Riesling with a shrieking bit of jazz in the background which brings out the acidity even more, making you drink swiftly and leave,” says Woonton.

Wine-focused dinners often unravel in the private rooms, including City’s mezzanine, such as the series with The River Café’s Avinash Shashidhara, “who does a regular Indian supper club,” says Woonton. “We matched Averekal Rasam braised octopus and fried curry leaves with young Rueda Verdejo (Duquesa de Valladolid, Castilla y Leon),” he recalls. “Surprisingly, the minerality and salinity of the wine with a hint of residual sugar held up well to the light heat of the dish.”

Woonton describes another event he worked at, albeit not at a Vinoteca. “We were at the end of the show when some very drunk and obnoxious wine know-it-alls were hassling us for left-over wines. We had magnum bottles on the counter for spittoons – you guess it, they took them…”

Alongside the wine bar/brasserie, Vinoteca’s retail list has been constantly building over the past 14 years, “and we still have people discovering that they can take their wine home,” says Woonton. The monthly Vinoteca Wine Club also proved a popular initiative, “where punters have six wines delivered to their door with loads of restaurant perks as part of the club.”

When not at a Vinoteca, you might Woonton aboard the London Shell Co’s Price Regent barge, depleting its “small but perfectly formed wine and spirit list.”

Co-creator of Vinoteca, Charlie Young has spent ‘a lifetime’ working in bars, restaurants and hotels, he says, ‘starting as a glass collector in a cocktail bar in Sheffield.’ Bitten by the wine bug in his early twenties, Young studied through the WSET, spending seven years in France and Australia before meeting business partner, Brett Woonton in 2000 while working at Liberty Wines. ‘Five years later, we opened Vinoteca, Farringdon.’ With the format honed, the restaurant, bar and retail concept subsequently mushroomed in Marylebone, Soho, Chiswick and King’s Cross, with Vinoteca at the Bloomberg Arcade, complete with prominent bar and private mezzanine, being the latest chapter.

‘Rather than having particular regional specialities, we tend to champion wines from lesser-known corners of their respective countries,’ says Young. These may include, from the Loire, Fiefs Vendeens and Cour-Cheverny, Rousillon (Collioure) and Burgundy (Ladoix); in Italy’s Piedmont (Ruche and Colli Tortonesi), Lombardy (Oltropo Pavese) and Tuscany (Suvereto). ‘But anything can earn its place if it truly well made, great value, and simply delicious.’

Following an importer hosted trip to South Africa ‘and in particular a brilliant tasting at BLANKbottle,’ Young and Woonton tasted an un-bottled Semillon-based blend which blew their minds ‘but divided opinions as to whether it was the ultimate finished article.’ With the separate components of that blend still in barrel, Young and Woonton tweaked, slurped, discussed and finally agreed on the final blend. ‘We’ve now just taken delivery of a pallet of wine which will only be found at the Tate and Vinoteca, the brilliantly named 2017 Young Dander The Sea Shark in recognition of the ‘master blenders’ behind it: Charlie Young (me!), Hamish Anderson from The Tate and Seamus Sharkey from The Ledbury. Damon Quinlan, like the 5th Beatle, receives no credit for his involvement.’

Young particularly enjoys the wine ledger. ‘It’s not a fine wine list, but rather an opportunity to list rare and/or unusual wines with a bit of age but which are in limited supply. The quantities are updated every day, and once something’s gone it’s gone. Current favourite is Huet’s 1989 Vouvray Sec ‘Haut-Lieu’ in half bottles.’

Vinoteca proudly runs a WSET course in-house, ‘hosted by the brilliant Tom Forrest. And everyone that we recruit sits level one as part of their induction, including chefs.’

Of the pricing at Vinoteca, Young has always believed in transparency. ‘We make sure we can source our wines at the keenest prices (including shipping direct from France, Spain, Italy, Germany and Australia – and storing in a Bermondsey warehouse – so we can sell them from our shops and online at proper retail prices and then apply a sensible mark-up for the drink-in price, which decreases as the price of the wine increases.’

The various Vinoteca sites have held ‘countless’ winemaker dinners over the years, ‘most of which were truly memorable, such as Paulo de Marchi from Isole e Olena and Eben Sadie – but actually a recent dinner with Alex and John from Birichino, California was genuinely hard to beat.’

Regarding corkage, Young will always consider it, ‘just make a good case for the wine you’re bringing. But the wines on our list are great value!’

Brett Woonton and Charlie Young met at Liberty Wines five years before launching, with huge care, their first Vinoteca wine bar/wine shop hybrid diagonally opposite St. John restaurant. It features vintage aromatised wine posters from Alfie’s antiques market, Marylebone. “What is exciting for us as Vinoteca turns 15 is that this neighbourhood is about to pop with the opening of Crossrail, relocation of the Museum of London and the Live Nations head office moving into the renovated Farmiloe building, meaning new punters to seduce with our well-sourced, entertaining wines and food!” says Woonton.

Further Vinotecas opened at Marylebone, Chiswick, King’s Cross and the City, the latter of which “gives punters the chance to enjoy wines we collected over the years, subject to a cash margin,” advises Woonton.

Both Woonton and Young remain fully committed to the day-to-day running of the business, “with the help of our talented team.” Indeed, the seasonal updates of the wine list remain “one of the highlights of what we do,” shares Woonton, who relishes taking to the shop floor when the opportunity arises. “Actually, I’ve still got the sales knack.”

Of that olive oil, Woonton recalls taking 10 of his team to Monstant to do the olive harvest and discover the region’s wines, including the Vi Negre from Celler El Masroig. “Such good understated wines that are amazing value for cash.” On the vein of discovery, each Vinoteca has its own regularly updated “wine paddle” featuring such wines as the best-selling Clare Valley, Rodney and the Horse Shiraz. “Great to see its evolution over three vintages.” Vinoteca also runs “wine labs” with much-loved wine educator, Tom Forrest, “giving punters the chance to try wines that they wouldn’t normally.”

Particular consideration is given to the playlists within the micro-empire. “There’s nothing worse than having a glass of nervy Riesling with a shrieking bit of jazz in the background which brings out the acidity even more, making you drink swiftly and leave,” says Woonton.

Of the various copy-cats of Vinoteca’s winning format, Woonton says, kindly, “it’s great to see such fine wine bars with shops opening meaning, at last, that punters will start to understand that you can buy wines from your local wine bar rather than just the supermarket or shoddy off-licence.”

Despite lockdown woes, expect more of the considered Vinoteca formula imminently, with the duo working on an opening outside of London, at 2 Chamberlain Square, Birmingham.