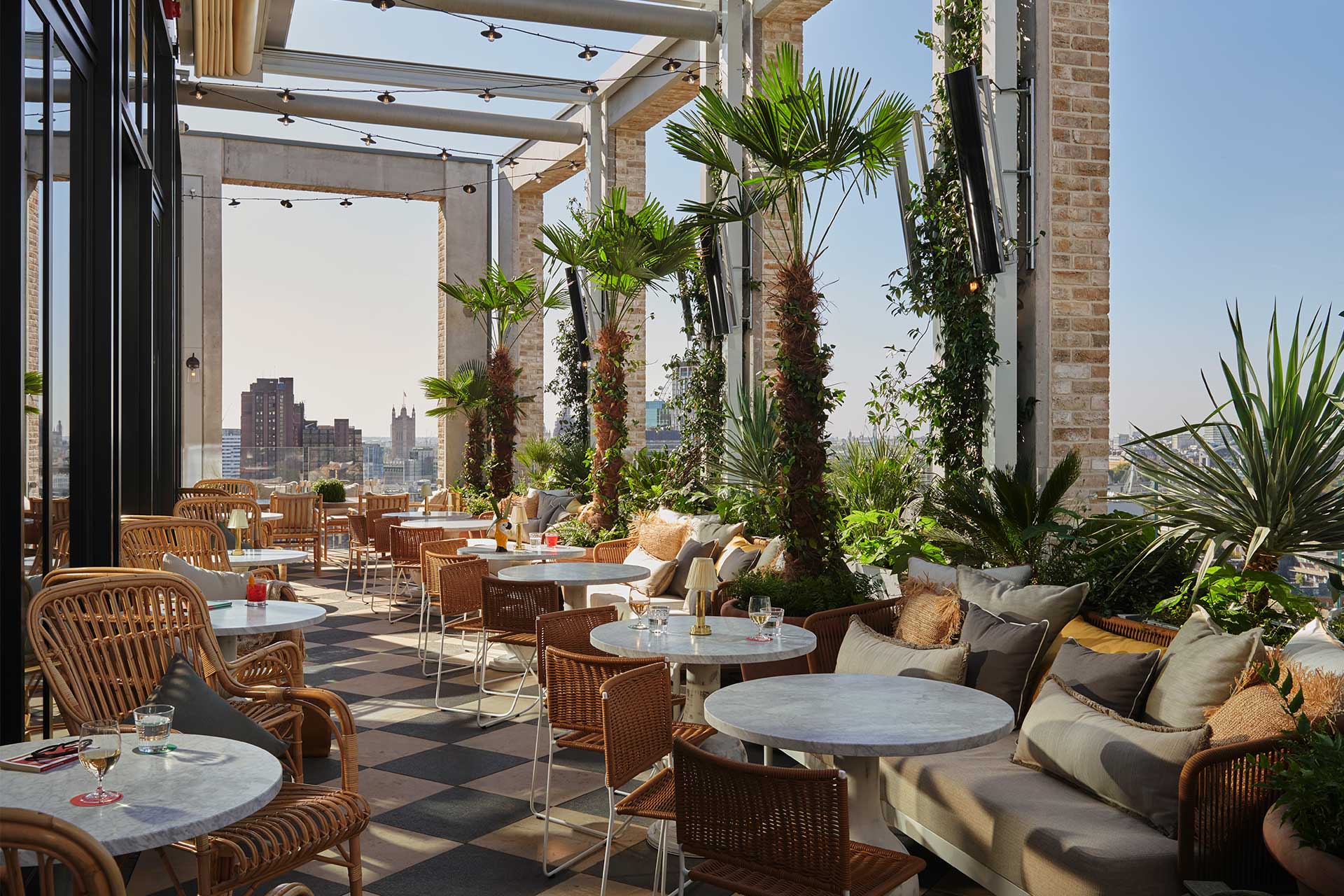 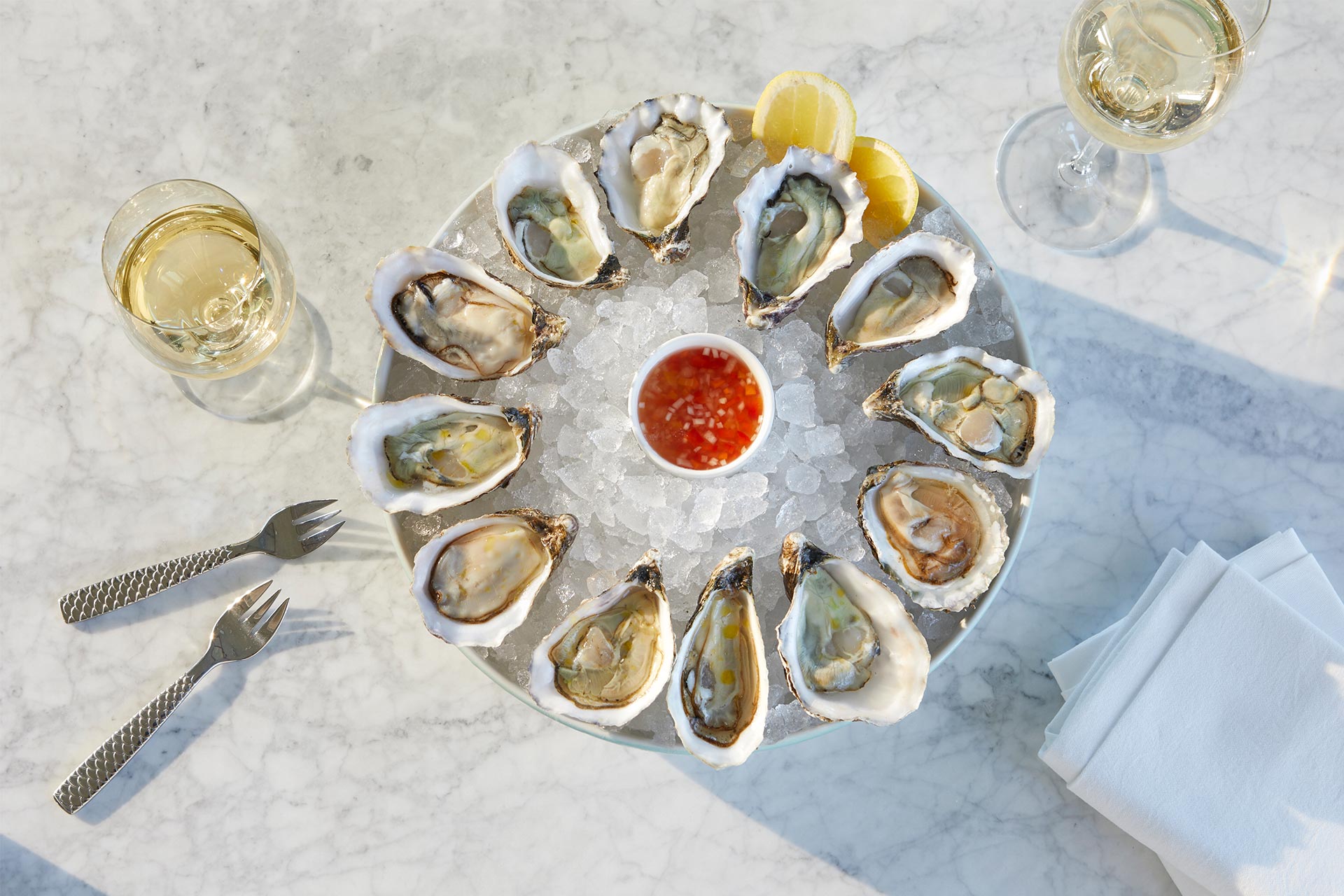 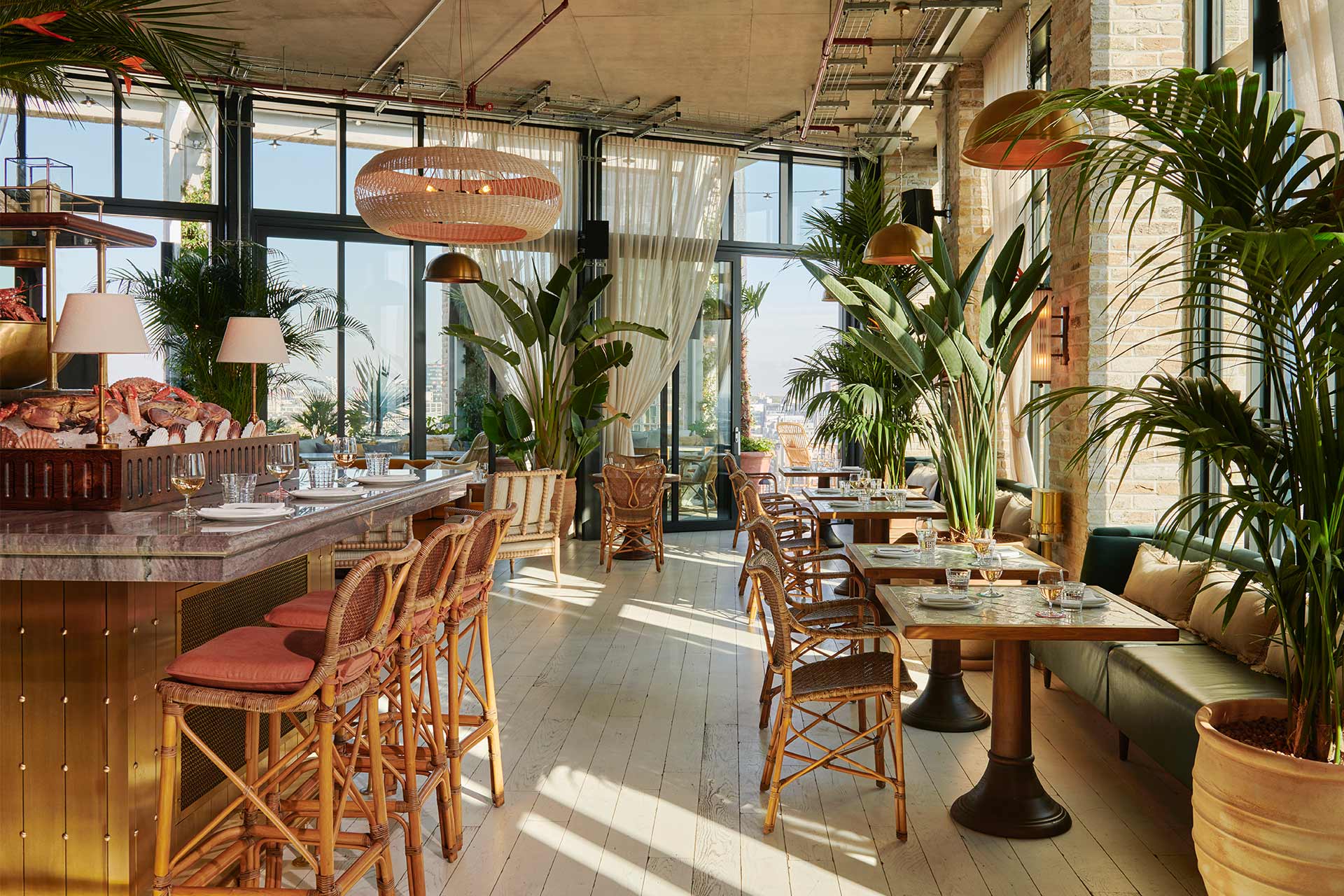 Seabird combines Stateside cool and ambition with Iberian flair in the kitchen atop the latest Hoxton hotel in Southwark.

The glamorous Seabird was founded by Krystof Zizka and Joshua Boissy, the minds behind Brooklyn’s celebrated oyster bar and absinthe café, Maison Premiere (RIP). Reached via its own lift, the open-plan kitchen, bar counter, marble seafood display including oysters from the UK, France Holland and Portugal, a surprise foliage-adorned atrium and extensive terrace feels shiny and haven-like, even on a grey day.

Fourteen is Zizka’s lucky number. He draws from fourteen wine suppliers here on the fourteenth floor of the latest in the Hoxton hotel range, perks of which include free international calls for guests. He has been a wine buyer for fourteen years, with his first role in hospitality occurring at age fourteen, “later on to support my way through college while studying filmmaking.” He subsequently found himself working in the recording industry, “until finally owning my own place, Maison Premiere.”

Being based in New York, Zizka consulted Michael Sager (Sager + Wilde), Roman Pawar (Les Caves de Pyrène) and Rupert Taylor (Uncharted Wines) to help realise his vision “and answer my silly questions.” To harmonise with dishes realised by head chef, Javier Duarte (previously at Barrafina), Zizka was “particularly excited to push towards Iberian producers.” Zizka describes one of the most satisfying listings. “We have a very special Canary Island Wine called Artifice (Borja Perez). Grown in volcanic soils, with citrus, honey, almond and oxidative characteristics, it’s definitely not a safe wine and takes you somewhere else. Perhaps because of the Brits love of sherry, many people love this food wine which goes with raw oysters, charcoal-grilled New Haven whole John Dory for two with mojo verde and lemon, and Iberico Pork Presa with celeriac, apple and king oyster mushrooms.”

Bottles are stored on the floor below the restaurant, “which we were able to claim in its entirety. Here we employ Eurocaves and a large walk-in refrigeration box. It’s not the glamorous part, but having facilities to care for the list is so important.”

Sommelier, Alexandre Durand oversees daily wine service. “Having joined Seabird as a floor manager, I quickly realised Alexandre was an avid wine drinker. We have the same tastes in producers and he has a bright future ahead of him in his field.”

Zizka recalls being bit by the wine bug. “I was inspired by a retail shop in New York City called Chamber Street Wines, and the distributor Louis Dressner. After some time, I learnt to be a fan of wine producers, their style, and the wines they make, rather than an individual wine itself.”

British wine culture has impressed Zizka. “There are a lot of trending wines in the States that are allocated and hard to find, but much easier to get in the UK.” When in town, you may well find him at 40 Maltby Street, “where the food and wine are divine and the staff are amazing.”

Meanwhile, cocktails at Seabird are devised by James Beard Foundation winner, William Elliot and include The Spalding, a bold, beautiful blend of hard-to-find white rhum agricole from Martinique, yoghurt, pineapple, Oloroso and abundant mint, served in a flamboyant peacock-shaped vase.