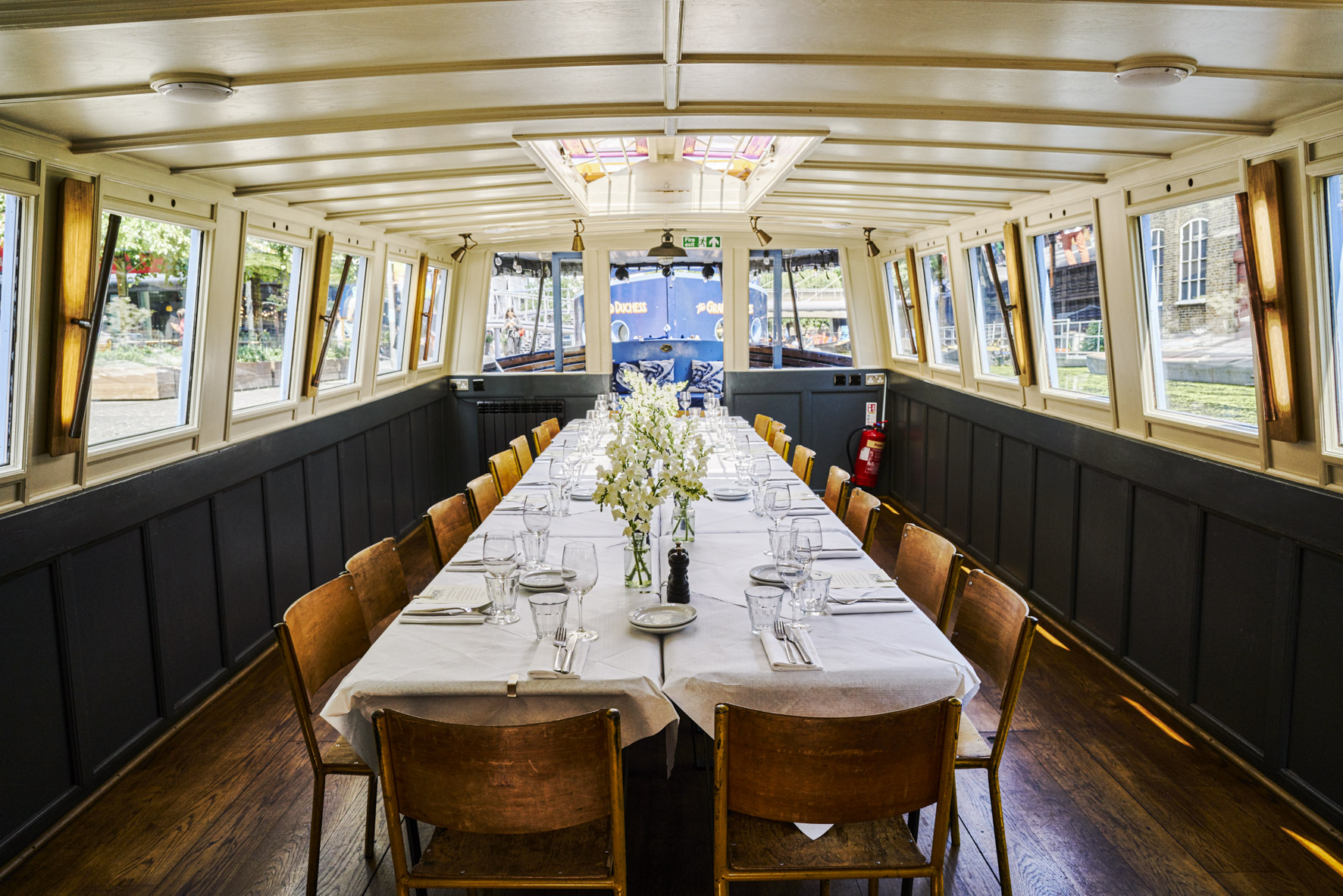 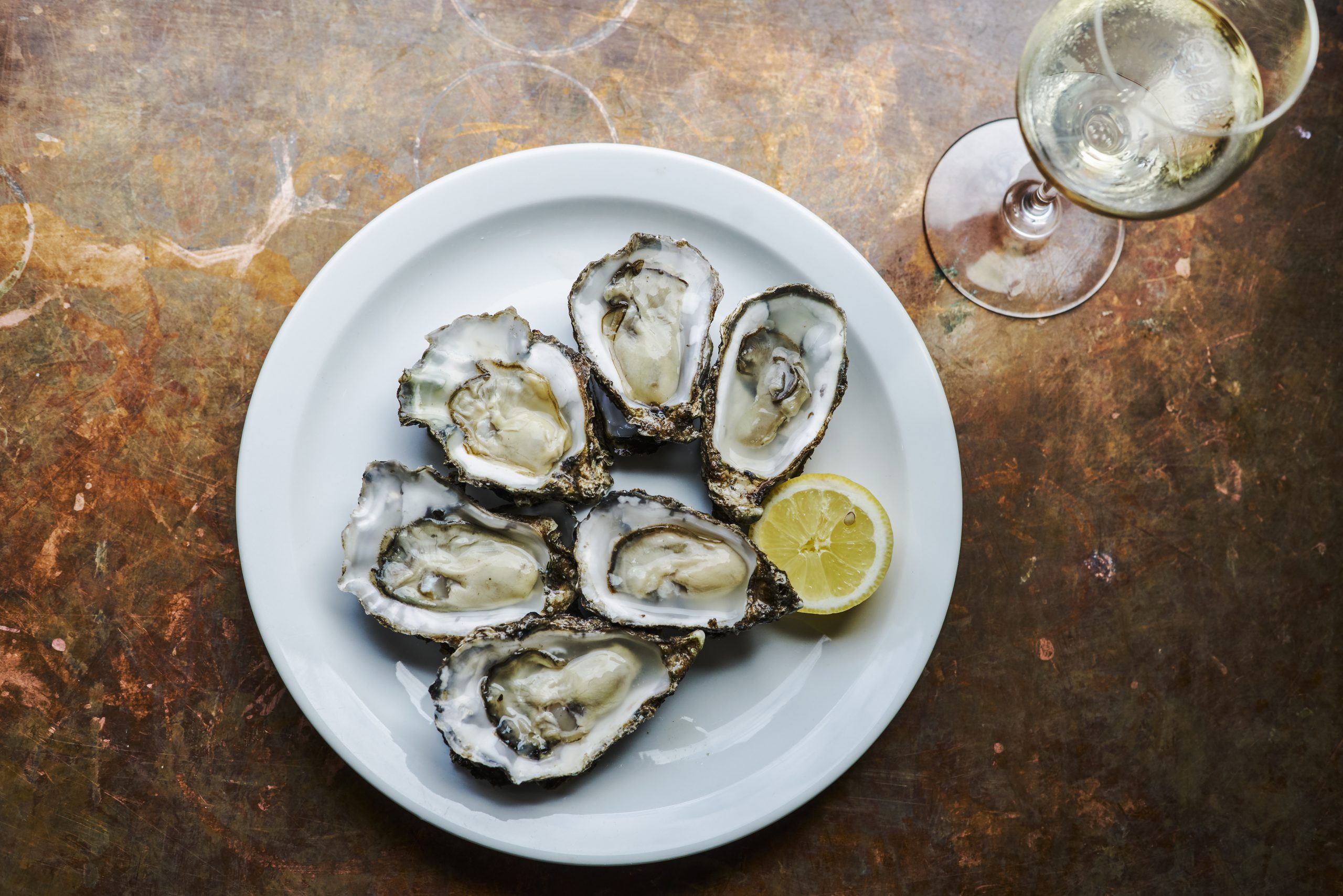 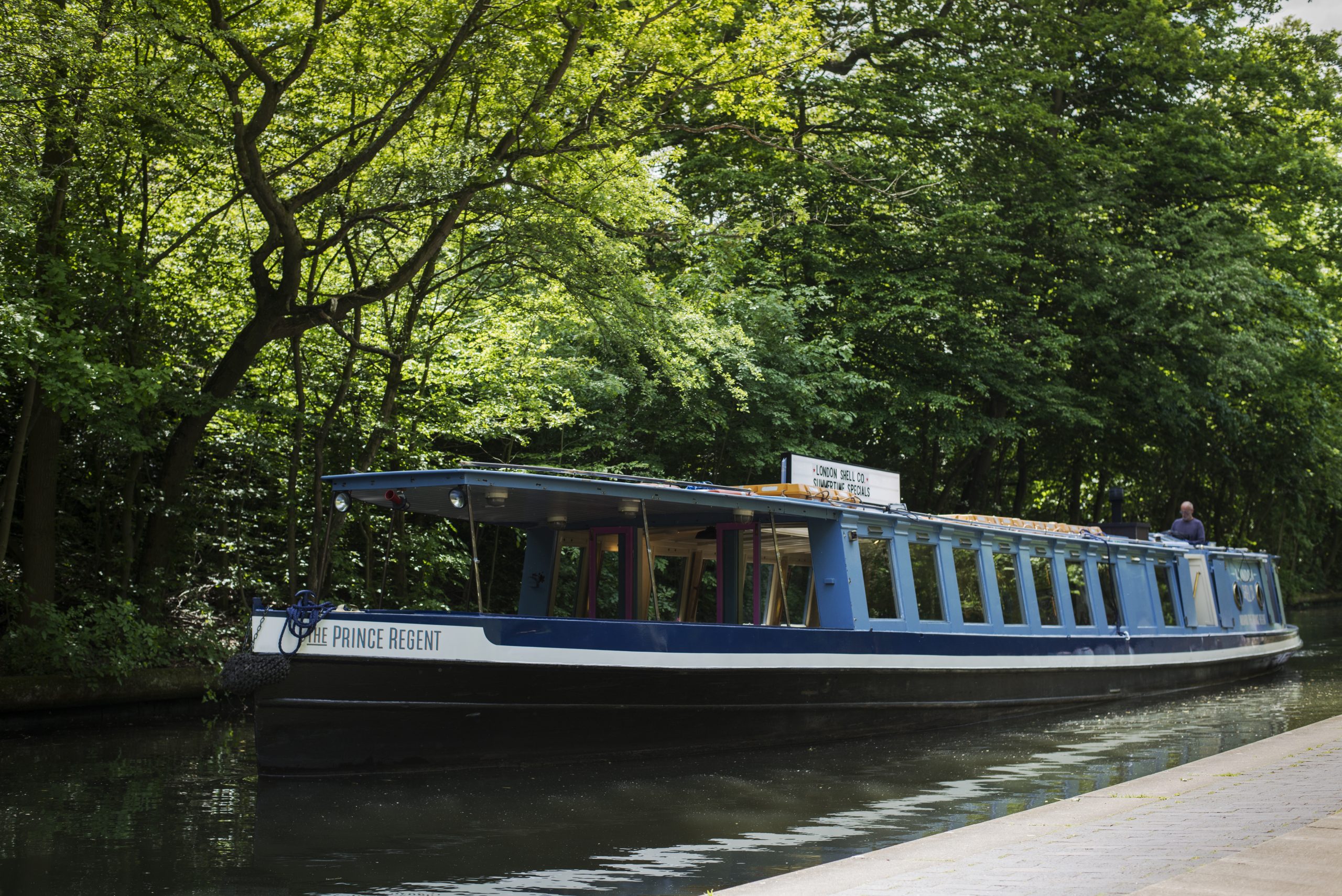 A haven from London’s hustle
Wines on tap, bespoke fizz and original choices
Colourful, sustainably inclined dishes
The semi-private room in the bow

Given the popularity of their cruising vessel, The Prince Regent, Harry Lobek and his sister, Leah needed a bigger boat. Cue the launch of larger vessel, The Grand Duchess, a static craft previously serving as the marketing suite for Paddington penthouses. Given the absence of an engine, this vessel is capacious enough to feature a semi-private “Captain’s Table”.

Opening with John Masefield’s 1902 “Sea Fever”, the list aboard The Grand Duchess is themed around noble fish. Hence, under “A Pint of Prawns” expect reds “light enough for drinking but still plenty to make a meal of”, such as aromatic “Experimental Batch” EB42 Summer Lovin’ Pinot Meunier (Mac Forbes). And honouring the mighty “Turbot” expect “decadent wines to impress your friends…” such as thickly-textured Langhe Bianco (Solea Roagna). Other sections include “Mackerel”, starring an Australian Petit Manseng (Symphonia) described as “Savennières in style”, and “Departures”, where Austrian Beerenauslese (Umathum) is offered by-the-glass. “When you dine with us, you will most likely ask yourself if today is a Mackerel or a Turbot day?” says Lobek. “Tongue in cheek, the most important thing to us is that our wines have character and integrity.”

The Lobeks love the Loire, particularly, “bulletproof Chenin” and “chic” Melon de Bourgogne. “Vincent Caillé, Monnières-Saint Fiacre has me as happy as a clam at high tide,” says Lobek.  Rich, complex and with “racy acidity”, aged Verdejo has proved a wonderful discovery, especially the single vineyard, micro-production, Vidal Soblechero Finca Buenavista. “It’s completely unrecognisable from the entry-level, mass-produced aromatic Rueda bottlings that sometimes crop up at large weddings of the past.”

Dishes by head chef, Stuart Kilpatrick may include Devon crab and Guinness rarebit, and cod with curried mussels, cauliflower and kale. Blending Bacchus and Pinot Gris, house bubbles are produced in collaboration with Hampshire’s Hattingley Valley – a nifty fit with oysters. “In our opinion the best value English Sparkling Wine you can buy; winemaker, Emma Rice is smashing it every year.”

The Lobeks dispense considerably more reds aboard the Grand Duchess compared to The Prince Regent. “Post-Christmas, we had to buy in a lot of big-boy reds, such as Dal Forno Valpolicella 2005 over Christmas. Some of our guests will always go big.”

Meanwhile, with ever-changing scenery, The Prince Regent gently slips its mooring come the evening, navigating to Little Venice with passengers kept “entertained and surprised” with sherry, including those bottled by progressive Spanish wine and sherry collective, Equipo Navazos, magnums of transcendant Provence rosé (Clos Cibonne) and mature wines. “Under Old Bangers we list a selection with bottle age.”

To crew both craft, the Lobeks team rose from 12 to 34, although a pause on hiring post-lockdown has meant the albeit happy crew can feel the pain of fatigue more keenly.

Of the first weeks of Lockdown, Lobek jokes he was indulging in three, three-course meals a day with a bountiful cheese board “permanently resting in the kitchen and fortified wines to give a final shove into oblivion.” However, matters soon changed when he begun implementing the delivery side of the business via hired fridge vans. “It was great to actually see customers.”

Keep an eye open for the London Shell Co’s own wine club, and having listed Tidal Rum for Jersey, they will be hosting a rum cruise.

Given the popularity of their first craft, the Prince Regent – home to London Shell Co – siblings, Harry and Leah Lobek were always going to need a bigger boat. Cue then the launch of sequel craft, The Grand Duchess, which previously acted as the unconventional marketing suite for adjacent penthouses. Unlike the Prince Regent, the Grand Duchess is permanently moored at Sheldon Square. And given the absence of an engine, the vessel feels especially spacious, boasting in the “Captain’s Table” to the fore, a semi-private room beyond a floor-to-ceiling wine display. Dining there on my visit was Lobek’s father, part of an intrepid crew who undertook a sailing sortie in another craft from Antigua to the Balearics – and will next embark on an around the world mission in four parts.

Quirkily, the wine list, which opens with John Masefield’s 1902 poem, “Sea Fever”, is organised by fish and crustaceans – although the concept goes beyond mere literal wine and food matching. Hence, under “A Pint of Prawns” expect “reds for passing the time” which are “light enough for drinking but still plenty to make a meal of”, such as nervy, ruby Vinho Verde (Anselmo Mendes) or the aromatic “Experimental Batch” EB42 Summer Lovin’ Pinot Meunier, Mac Forbes, Yarra Valley). And, honouring the mighty specimens of “Turbot” which are caught in Cornwall and reach up-to seven kilograms, expect “serious, decadent wines to impress your friends…” being “big boned with structure.” These may include thickly textured, expressive White Hill Chardonnay from Liquid Farm, and Solea Roagna. Other sections include “Cockles & Clams”, featuring Banyuls Blanc (Coume del Mas, Collioure) and “Departures”, where a 1990 Madeira is offered by-the-glass (H.M. Borges Sercial).

Dishes by head chef, Stuart Kilpatrick may include hake with borlotti beans, whitebait, which is best enjoyed with a “session-able Tourraine”, and an imposing surf and turf platter featuring half a juicy lobster and beef on the bone. Of biting at those bones, Harry says, “it’s the manliest thing to do!”

Blending Bacchus and Pinot Gris, house bubbles are produced in collaboration with Hampshire’s Hattingley Valley, which works niftily with oysters, served throughout the day.