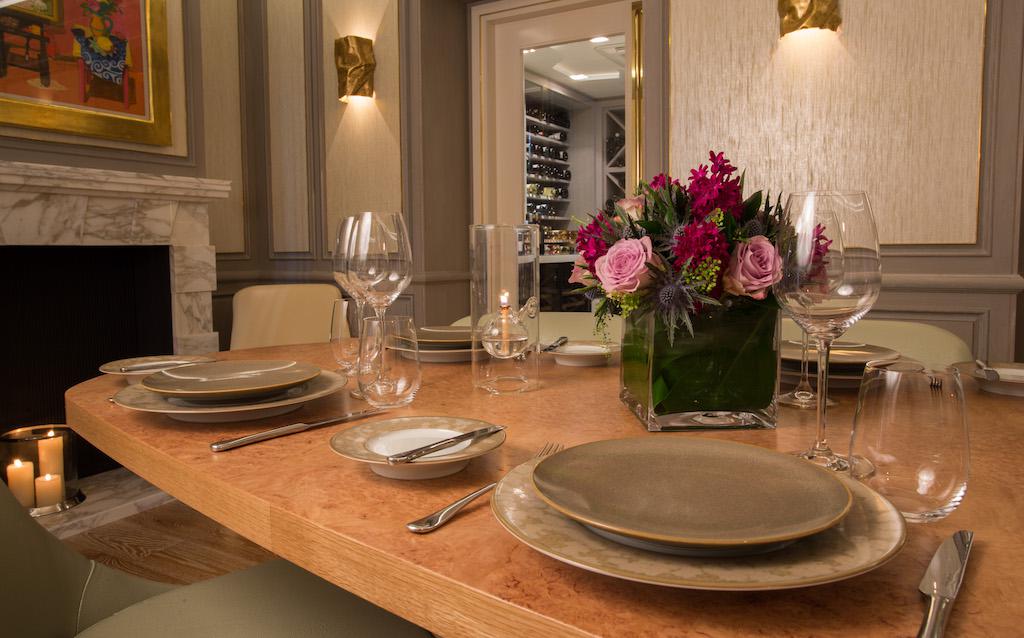 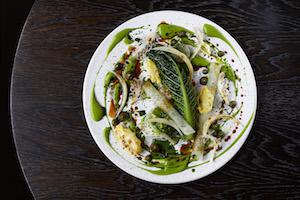 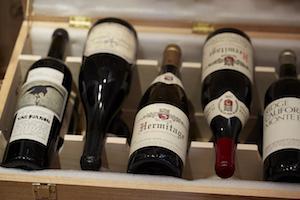 The haven-like, Chelsea restaurant replete with its own Sussex farm is run by chef and wine collector, Taylor Bonnyman.

The comely Chelsea eatery is named after the “five fields” recorded by eighteenth-century cartographer, John Rocque bisecting this once pastoral setting.

“From Vienne to Avignon, my native region, the Rhône, is the perfect region, with its diversity of terroirs, landscapes and grape varieties which, in terms of price and style, can suit everyone,” says Solène Bonhumeau, head sommelier at Chelsea’s The Five Fields.

Formerly of Ten Trinity Square Private Club by the Tower of London, Quay Restaurant, Sydney (a regular on The World’s 50 Best Restaurants list), and Cheval Blanc’s Courchevel grand chalet, Bonhumeau aims to create a list which reflects her personality. “A good bottle of wine must have a good level of drinkability,” she says. “And it’s necessary for the list to be equitable with young and mature wines, to suit my guests’ preferences.”

Bonhumeau’s current favourite wine and food match is Chignin Bergeron Les Filles (Gilles Berlioz) with the native lobster with ground garlic and curry realised by chefs, Taylor Bonnyman (formerly of Corton in Tribeca, New York) and Marguerite Keogh (Marcus Wareing at The Berkeley). “The Roussanne’s fresh, silky palate beautifully compliments the fleshy texture of our roasted lobster, and the complex aromas of white flowers, ripe peach, quince and almond in the wine combine with the savoury yellow curry sauce creating an explosion of flavours!”

In the interlude between Ten Trinity Square and The Five Fields, Bonhumeau refreshed her palate in Champagne, the Loire and of course, the Rhône. “I am planning to visit the Douro, Santorini, and Italy next.” She also enjoys discovering thought-provoking ferment at Sager + Wilde, Compagnie des Vins Surnaturels and Cabotte.

The bijou Chelsea restaurant with cosy, panelled bar and uplifting private room beside the cellar, replaced Spanish restaurant, El Blason, and is named after the ‘five fields’ recorded by 18th-century cartographer, John Rocque.

Anna Botting, former group Head Sommelier and wine buyer for Angela Hartnett of Murano fame, replaced a Moët UK Sommelier of the Year, Mathias Camilleri. Botting, who also worked as assistant Head Sommelier to Jan Konetzki at Restaurant Gordon Ramsay, as sommelier de rang at Le Manoir aux Quat’Saisons, and for Sat Bains and Marlon Abela, is ‘a big fan’ of the wines of Sicily. ‘Expect new, exciting editions coming up from producers I recently visited,’ she says.

The list at The Five Fields is composed of 500 bins, ‘based on wines made by small producers from all around the world,’ says Botting. These may include fizz from Hampshire’s Cottonworth as well as Austrian Sekt, and deeply satisfyingly rich red, Psi from Ribera del Duero. Also note the magnums of Sassicaia, arguably too many Sancerres, the swathe of red Burgundy, sometimes rare Rhônes, and curios such as the still Pinot Meunier from Australia (Lethbridge), as well as Chinese wines from the hand of Lenz Moser (Château Changyu), a Slovakian Riesling (Château Belá by Egon Müller) and, from Jerusalem, ‘C’ Blanc du Castel. You need not wait until payday to visit, with many sapid bins rolling in at £50 or under.

Attractive, sparsely explained dishes, such as starter of morels with chervil, wasabi and calf’s head, main of Orkney scallops with asparagus, turmeric and dried scallop, and pudding of rhubarb with lime and Timut (Nepalese) pepper are authored by Taylor Bonnyman, (formerly of Corton in Tribeca, New York) and Marguerite Keogh (Marcus Wareing at The Berkeley) and are likely to include ingredients raised by the restaurant’s own Sussex-based kitchen gardener, Heather Young.

Head sommelier Mathias Camilleri (who used to work under 28o-50o’s Clement Robert at Medlar) leads an enthusiastic and knowledgeable wine team who will be able to give you the lowdown on 500-or-so bins.

Burgundy and Bordeaux lovers will find plenty to titillate them here. It’s a sign of the wine credentials of Michelin-starred The Five Fields that it benefits from a private storage cellar for laying down bottles bought en primeur and for extended storage. That doesn’t mean that the list remains static, however; far from it – Camilleri works hard to keep things dynamic, with a pretty high turnover of listings and always a new and interesting vintage to enjoy of cult wines from the Cote D’Or, and left- and right-bank claret.

By-the-glass listings run to about 20 or so and are considerately priced – whites £8-£21, reds £10-£21, with a small selection of icons available by Coravin (at the time of writing, the mighty fine Château-Chalon vin jaune from Domaine Jean Bourdy, 1992 vintage, priced at £40 for 100ml and, for the same price, Philip Togni 1998 Cabernet Sauvignon). Camilleri professes a love for New World Cabs and Syrahs, and German Rieslings, of course. The by-the-glass list changes every three months.

A bit of an ambassador for Champagne, Camilleri also has a special side list of wines from Champagne Lanson – sample Père et Fils, Rosé Label, Noble Cuvée Blanc de Blancs 2000 or Ivory Label Demi-Sec by the glass, or Gold Label spanning 1989 to 2002 vintage by the bottle. The demi-sec is a winner with the foie gras parfait with celeriac and walnut.

The tasting menu would be a great way to work your way through this elegant list – for £150, pairings such as brill, rhubarb and oyster with Stag’s Leap Karia Chardonnay or cod, cockles and clams with Bernhard Huber Malterdinger Spätburgunder are yours to revel in.

One of the key areas Camilleri has sought to expand during his year at the restaurants is the Italian section, which boasts a lovely selection of Piedmontese and Tuscan reds from a good spread of vintages. A Giovanni Rosso Langhe Nebbiolo 2014, at just £55, would be a nice choice if you wanted something a bit classical that wasn’t going to give you a cold sweat when the bill arrived.

As far as glassware is concerned, it’s Riedel as standard with Zaltos for the finer wines. Novelties such as the Jeroboam of Graham’s 10-year-old Port, brought to the table, also add amusement. This is a list well worth delving into.

The appealing, fine dining, Chelsea staple is named after the “five fields” which bisected this once pastoral setting, mapped by eighteenth-century cartographer, John Rocque.

“I can’t stress how important teamwork is in our small, neighbourhood, family-owned restaurant,” says Polish-born head sommelier, Agnieszka Swiecka, who formerly ascended from commis to head sommelier at Pollen Street Social. A holder of the WSET Diploma and Advanced Sommelier Certificate (Court of Master Sommeliers), Swiecka is now preparing for the Master Sommelier exam.

Running to 500 references, Swiecka describes her list, implemented with “knowledgeable assistant, Andrea Boscolo Cremondin,” as “a world journey from France and Italy via Austria, Germany, Greece and England to South Africa, China, Brazil and the USA…”

As well as on-site storage, including cabinets in the naturally-lit private dining room, Swiecka has reserves outside London, including cases bought en-primeur, “with Burgundies from Cathiard, Bernard Moreau, Roumier and Arnaud Ente, Italian legends, Sassicaia and Montevertine Le Pergole Torte, and, from the New World, Diamond Creek Cabernets. This means, when their drinking window opens, I can offer wines some bottle age and iconic producers, such as Coche-Dury 2013 Meursault, closer to cost price.”

As a “vital part” of her wine education, and to ensure all her guests’ taste profiles are “covered”, Swiecka ordinarily travels to as many wine regions as time allows. “It’s important to have wines to suit every palate, whether you like Marlborough Sauvignon Blanc, Swiss Fendant with ten years of bottle age, or Grand Cru Burgundy – you’ll find it on my list.”

Swiecka mentions that menus star produce from the restaurant’s own gardens in Frant, East Sussex, including woodruff, meadowsweet and beetroots, the latter being celebrated in her favourite dish. “An explosion of textures, roast red and yellow beetroots, lemon verbena, nori and foie gras is served over three plates including elderflower gel and tangy goat’s cheese ice cream, rich foie gras in crispy nori with cherries, and palate-cleansing, frozen beetroot ball with lemon verbena oil and beetroot tartare.” Here, Swiecka partners Weinland Family Reunion Rosé from Austria’s Gut Oggau, uniting Blaufränkisch, Zweigelt and Roesler, “which helps show the earthy notes of beetroot followed by sweet cherries and raspberry to amplify flavours then cleanse with its acidity.”

It is Swiecka’s goal to raise the profile of sweet pours, including venerable, fortified renditions of Madeira, “which offers the perfect finish to a meal and should be promoted more. They are our heritage.”

Swiecka also offers sake by-the-glass, “which doesn’t get into fights with food.” And, when not savouring wine or sake, Swiecka is keen on a trio of green drinks, being “mate, matcha and green Chartreuse.”