George Barson is the executive chef of Mayfair hotspot Kitty Fisher’s and newcomer Cora Pearl, a restaurant inspired by the nineteenth century courtesan famed for her glamorous lifestyle, that opened in Covent Garden in June. 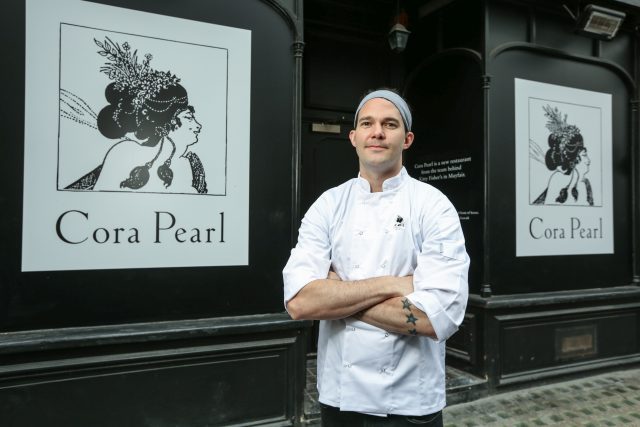 The 60-cover Henrietta Street site will be led by Barson, who will continue to head up both sites as executive chef.

His menu combines simple classics with more decadent dishes that pay homage to Pearl’s British roots and the time she spend as a courtesan to pleasure seekers in 19th century Paris. Among the dishes on the debut menu are shrimp Newburg; leek heart with smoked eel; fish stew; confit pork belly with smoked quince; and wild strawberry and Earl Grey ice cream.

What/who influenced your decision to become a chef?

My grandad was a great cook, always making traditional British dishes from amazing local ingredients – it was very inspiring. Also, my mum worked in a restaurant when I was a kid. I’d sit in the kitchen watching the chef whilst she was working and I remember being so impressed by his work.

Can you remember/describe your first shift in a kitchen?

My first shift in a kitchen was in a pub in Devon, near where I grew up. I had to pluck about 100 pheasants!

What is your earliest wine memory?

It’s probably actually a dessert wine. My aunt took me out for lunch for my birthday and we had Elysium Black Muscat.

What has been your most memorable meal?

Oaxen Slip in Stockholm. We stumbled across it on the last day of a long weekend in the city. Beautiful setting and great food, but it’s the grilled king crab claws with curried butter that particularly stick in my mind.

How important is wine to a meal, from a chef’s point of view?

Wine is often the first thing you taste when you go to a restaurant, and therefore responsible for that all important first impression. A perfect glass of wine brought swiftly to the table can be the perfect way to relax into a meal, take in your surroundings and whet your appetite. Beyond that, a skilled sommelier can also really enhance a chef’s food through the wines they match with a meal.

What would be your ultimate food and wine pairing?

I have a sweet tooth so it would probably be something like an ice wine alongside an apple tarte tatin with vanilla ice cream. That said, I was recently in Tuscany, and drinking a local Vino Nobile di Montepulciano alongside a dish of pici with rich tomato ragu was one of the best pairing I’ve ever had.

Who is your inspiration in the winemaking and gastronomic world and why?

I recently visited Fonterutoli in Tuscany, which has been run by the Mazzei family since 1435. Incredible history, but they have also always driven innovation to keep themselves relevant and hugely successful in winemaking to this day.

This has happened at various points in my career, but it tends to involve the extraction going down and the gas shutting down, always moments before a busy service.

If you could give your younger self advice starting out as a chef, what would it be?

As a young chef, you look up to people, try to emulate others, and get swept up in following trends. Actually, I think it’s important to cook how you would like to eat, and be true to yourself.

If you weren’t a chef, what would you be doing?

I can’t imagine my life away from restaurants – it’s what I’ve always done. Perhaps a mixologist?!

Besides cooking, which talent would you most like to have?

This may sound ridiculous, but I’ve always wanted to be able to play the panpipes.

What would be your best piece of culinary advice for an aspiring home cook?

Invest in some really good knives and learn how to use and look after them properly.

If you could only eat at one restaurant for the rest of your life, where would you choose?

The Hand & Flowers – food you want to eat whilst also being gastronomically interesting.

What else would you like to achieve in life?

I’d love to run a restaurant with rooms in the countryside.

And finally, what is your life motto?

It’s only cooking – my grandad always used to say this to me when I was getting stressed about work, and I think it’s a good principal to work by. It doesn’t mean I care any less, but it can be very grounding when things are getting on top of you.