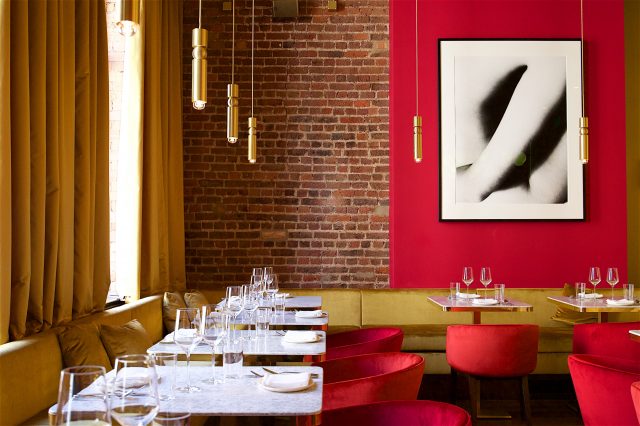 The concept: Much in the same way as master mixer Ryan Chetiyawardana’s Cub in Shoredich blurred the lines between bar and restaurant until the two were indecipherable, one of London’s most creative mixologists, Tony Conigliaro, is hoping to do the same at Gazelle in Mayfair, where cocktails are shown as much reverence as dishes.

Teaming up with Conigliaro on the project is Botswana-born chef Rob Roy Cameron, who has learnt a trick or three from Ferran Adrià’s brother Albert while working as head chef at his Mexican-themed Michelin-starred Barcelona site Hoja Santa.

The décor: Set across the second and third floors of an Edwardian townhouse connected by a spiral staircase, going against the grain of the current trend for minimalist industrial décor, Gazelle doesn’t dress down.

While the bright colours may not serve to sooth, I loved its unashamedly brazen look – too many restaurants play it boringly safe in the design stakes so it’s refreshing to discover a place with enough balls to go a bit wild with the décor.

In a hat tip to Conigliaro’s love of contemporary art, adorning the walls of the restaurant and upstairs bar are arty monochrome prints of photographer Zachary Michael’s girlfriend shot so close up you have to play guess the body part.

The food: The affable and unassuming Rob Roy Cameron couldn’t be more serious about food. His time working alongside Albert Adrià and an earlier stint with Ferrán at El Bulli is evident in his dishes, some of which look deceptively simple but require a mammoth amount of work behind the scenes to prefect.

After service on a buzzing Thursday night, Cameron tells me that the Damien Hirst-like dot of salted carrot that appears alongside salt-flecked slices of impossibly soft presa Iberica (a tender, trendy cut of pork shoulder), takes over a week to create through a series of intricate technical procedures.

Keen to break down the barriers between bar and restaurant, Cameron has done away with the traditional menu format and instead offers an array of dishes designed to be shared and served in threes. Continuing with the triptych theme, each of the dishes is described in three ingredients.

Signature dishes: Almost everything we tried was delicious and different. Among the unmissable dishes was a humble-sounding plate of leeks bobbing like albino logs in a rich and creamy chicken broth dotted with green puddles of chive oil. While the flavour of the broth made the dish, the leeks had an appealing ghostly smokiness to them that made me look forward to autumn.

Another highlight was a playful dish of squid fashioned into pasta-like ribbons adorned with earthy girolles and gossamer-thin slivers of salty pork jowl. Its arrival proved so tempting for our neighbouring diner that he picked up my plate without asking, held it to his nose and took a deep breath.

The salty symphony of pork and mushroom coupled with the meaty smokiness of the squid was an inspired marriage of earth and sea.

Carnivores should also order the beef dish, which is served blanketed in a powdery layer of ruby red salted plum. As silky as waygu, the beef was bought to life by the fruity thread of the plum running through it.

The only miss of the evening was a slightly scary looking bowl of halibut, orange and elderflower, which sounded promising but the delicate flavour of the fish got lost amid an oil slick of squid ink, which made it slimy rather than sublime.

The drinks: With Conigliaro behind the cocktails, it’s worth starting the evening with a sharpener and some snacks in the upstairs bar. Cameron and Conigliaro work in tandem, and all of the bar snacks have been designed to pair with the drinks.

Among the most inspired combos was a lime-laced corn tostada served with the Serafin, a refreshing apéritif made with Tequila, pear liqueur, lime and ginger beer. The Liquorice Sour was wonderfully indulgent but better suited to the end of the evening.

Cameron’s El Bulli influence comes to the fore in his bar snacks. The ‘mushroom layers’ is a fascinating journey of tastes and textures taking in a mushroom jelly, earthy slivers of raw mushroom and which chocolate, which added wonderful creaminess.

The ‘frozen yeast’ meanwhile, looks like an ice cream sarnie but tasted like the super savoury cheesy innards of a Tuc biscuit. I’d bypass the ‘crispy leaves’, unless the idea of chomping on fallen foliage appeals.

As for the wines, the list is short but achingly hip, taking in all the recent wine trends from rosé, Greek whites and cru Beaujolais to orange wine.

The latter was an ‘amber’ Sauvignon Blanc from Cullen in Australia’s Margaret River, which our charming French sommelier described as an ideal introduction to orange wine, as it hovers on the safer side of funky and still has lovely fruit character.

Who to know: Tony C is a busy man, splitting his time between Gazelle, his flagship bar 69 Colebrooke Row, Untitled, Bar Termini and Luciole in Cognac, but it’s worth seeking him out if you’re lucky enough to find him behind the bar.

Don’t leave without: Sticking around for dessert. On our visit Cameron served us a salty, malty dish involving goat’s cheese, biscuit and peanut butter, which shouldn’t have worked but turned out to be the moreish pud I’ve enjoyed all year.

Last word: Gazelle is not the norm for Mayfair and therein lies its charm. With its wacky décor, playful bar snacks and clever cocktails, it brings a slice of Shoreditch cool to moneyed Mayfair with swagger and grace.

Gazelle has a sense of humour and wears its technical prowess lightly. While he may be modest, Rob Roy Cameron is an exceedingly talented young chef whose progress will be fascinating to follow.