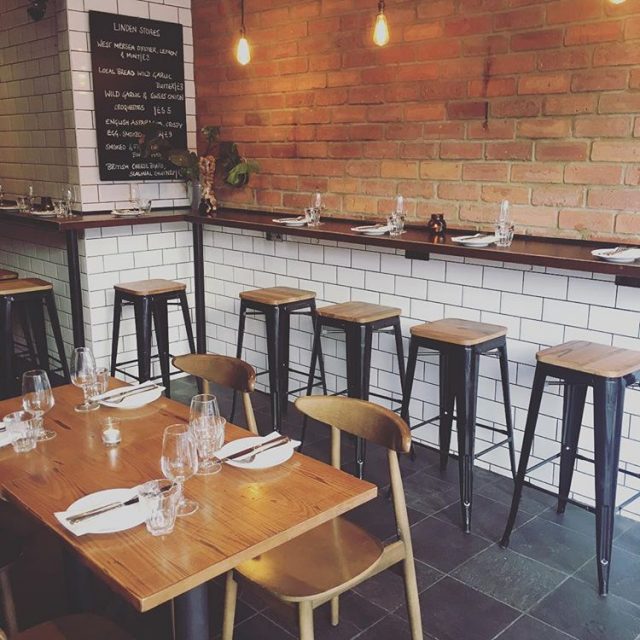 The concept: Slightly off Islington’s beaten track, neighbourhood wine bar and restaurant Linden stores is the product of food and wine power couple Laura Christie, co-founder of Oklava in Shoreditch and Kyseri in Covent Garden (alongside chef Selin Kiazim), and Chris Boustead, one half of pop dining duo Boustead & Bidois and who has also held roles at Opera Tavern, Ten Bells and James Cochran.

Growing up in Yorkshire, in the kitchen, Boustead brings the county’s produce to the streets of north London, devoting space on the menu to its cheese, black pudding and rhubarb.

With wines available to take away at £10 less than the list price, Linden Stores also doubles up as an events space, hosting monthly wine events with its suppliers and industry figures including Dr James Flewellen, a wine writer, educator and biophysicist.

A short stroll from Highbury and Islington station, it pairs informal, seasonal dining with a quirky eastern Mediterranean-dominated wine list for which Christie has become well-known. 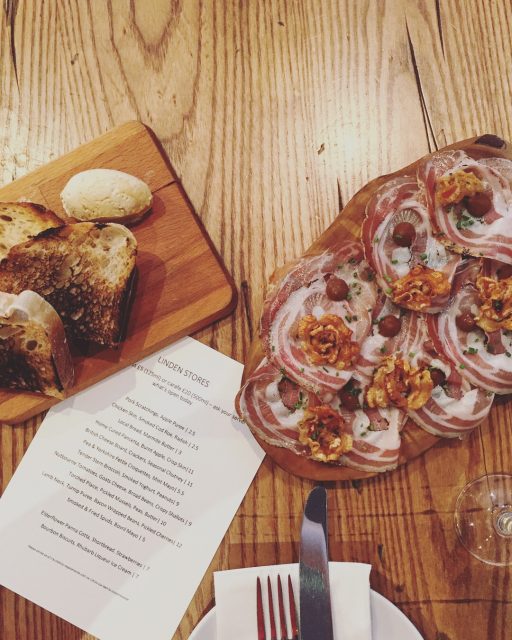 The décor: Originally launched at the end of 2017 as with a wine shop at street level and a restaurant below ground, Linden Stores has since changed tact for the summer months, with seating moved upstairs and the ground-floor area mostly reserved for private events.

The décor is simple and unfussy, with bare brick interposed with glazed cream tiles. Bar stools run along one side of the restaurant, while wine racks occupy the other, with stripped back suspending lighting emitting a welcoming glow.

The food: Boustead’s menu changes with the seasons with smoked beef stew and thyme dumplings warming the cockles in winter and West Mersea oysters with lemon and mint providing suitable refreshment in the spring.

With temperatures in excess of 30 degrees on my visit, cooling yet comforting was definitely the order of the day. A board filled with home cured salty pancetta was tempered by burnt apple purée and finished perfectly by crispy, yet light, crackling. Warm bread liberally spread with whipped marmite butter also went down a treat – they’re clearly a fan of their brown British condiments at this place.

On the lighter side, torched plaice fell apart into a lake of butter sauce lightened with sharp-yet-sweet pickled mussels and peas. 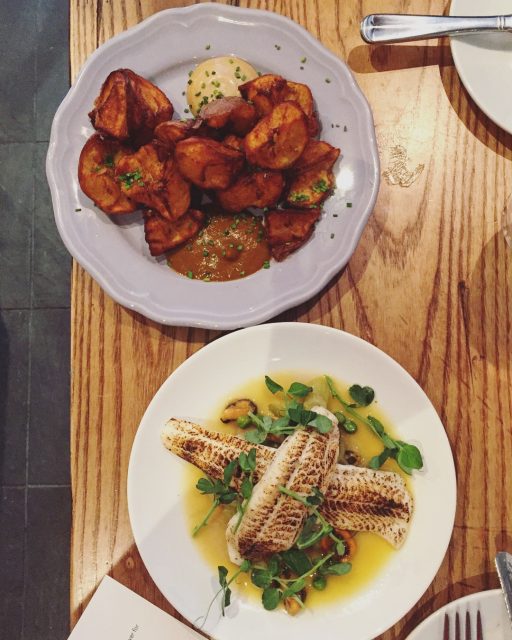 Moving to the puds, the homemade Bourbon biscuits with rhubarb liqueur ice cream stole the show, the latter sweet enough so as to complement rather than destroy the taste of the malted chocolate.

Signature dishes: You can’t go to Linden Stores without trying the Bovril mayo, I was reliably informed by the restaurant’s PR representative – and she was right. On the menu all year round, as they should be, are the smoked and fried spuds accompanied by a pleasingly large dollop of the flavoured mayonnaise – there’s no need to skimp on dipping.

Also worth seeking out are the croquettes, served at just the right temperature to reveal their oozy interior with pea and mint demonstrating exactly why they are put together so often.

The drinks: Christie was praised for her bravery in developing an all-Turkish wine list at her first outpost with friend and business partner Selin Kiazim. “I knew if we put other wines on there that people wouldn’t try them so we made the whole menu Turkish,” she said at the time. It’s no surprise, therefore, that the list at Linden Stores nods its head to the country on more than one occasion.

Aside from Turkey, Christie professes a love of wines from Greece, Cyprus, Lebanon and eastern Europe, with some new wave wines from Australia, Austria and South Africa thrown in for good measure.

We started off with a glass of Ferghettina Franciacorta Brut DOCG, a beautiful biscuity number bursting with hazelnut and white peach. Also on pour is Ca’ di Rajo’s Lemoss Prosecco col fondo, an unfiltered frizzante-style sparkler with notes of crisp apple and blossom sealed with a crown cap, a lighter alternative that’s a bit different.

Highlights also included Arcadia’s Odrysia Gris 2015 from the Thrace region of Turkey, composed of predominately Sauvignon Gris with a touch of Pinot Gris. Substantially riper and less aromatic than its cousin, Sauvignon Blanc, the Sauvignon Gris had notes of nectarine and lemon with a mouth-coating creaminess. 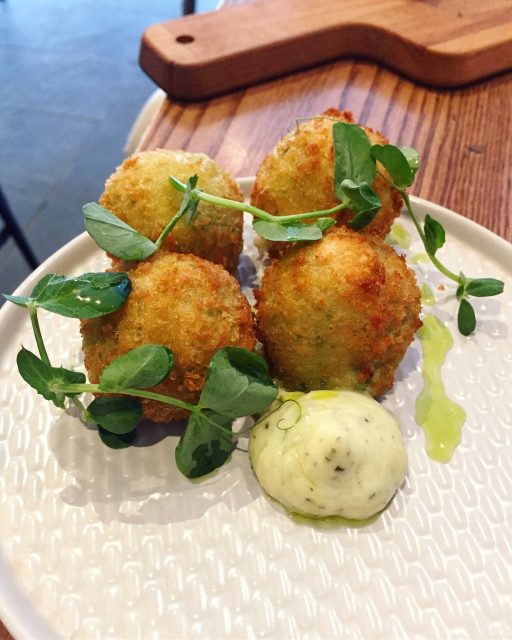 Other wines to look out for on the list include Rag & Bone’s Riesling from the Eden Valley, The Underworld’s Grenache Blanc from South Africa’s Western Cape, Paper Road’s New Zealand Pinot Noir and an unoaked red Tibouren blend from Clos Cibonne in the Côtes de Provence.

A selection of bottles will be open on the day for £5 per 125ml or £20 for a 500ml carafe. While it is wine-centred, beer from the likes of Beavertown and Kernel are also on pour.

Who to know: If you don’t get to meet Christie or Boustead, look out for Rebecca who will guide you through the wine list with aplomb.

Last word: Linden Stores is a neighbourhood restaurant and bar at its core, so one has to wonder whether its location – on the corner of Highbury Grove rather than on the busier, foodie Upper Street – is the best place for it. On my visit on a Thursday evening, there was a distinct lack of foot-fall. While this could well have been attributed to the scorching heat and punters opting for outdoor venues, in an area which has lost the likes of Cabana, Jamon Jamon, The Elk in the Woods, La Porchetta in recent months, coupled with the closures that have rocked the London restaurant scene as a whole, getting the right site becomes all the more important.

That said, I thoroughly enjoyed my experience and applaud the simple, seasonal yet inventive menu paired with the chance to try some rather more unusual wines. The staff were incredibly friendly and attentive and rather than cramming everything on the table at once, the sharing dishes arrived in correctly spaced intervals. So often in wine-focused venues the food is an afterthought, and here it definitely is not. Fingers crossed that as the heat begins to subside and London returns from its summer holidays, Linden Stores will receive the attention it deserves.

The restaurant will be closed for summer from 19 August and will reopen on 5 September 2018.