Kent-based Simpsons Wine Estate is expecting to harvest 200 tones of grapes this year, up from just 30 tones harvested in 2016 and 2017, as co-owners Charles and Ruth Simpson warn that the shortage of winery space will be a “big issue” for English wine producers in 2018.

The size and quality of this year’s grape harvest in England has already been widely documented. On a trip to Simpsons Wine Estate, near Canterbury in Kent, co-owners Charles and Ruth Simpson revealed that the volumes expected this year are almost seven times that harvested in the previous two years.

“We’re expecting 200 tones this year and that changes everything,” he added, stating that himself and Ruth had been speaking to Waitrose, Bibendum and Matthew Clark about possible deals.

As well as their soon-to-be launched sparkling wines, from the grapes this year, the Simpsons are planning to produce two still Chardonnays (they already produce one), a Provençal-style rosé “in a proper bottle” and a still red Pinot Noir.

The husband and wife team highlighted the fact that there will be a shortage in winery facilities, stating that they had relied on their contacts in France (they’ve been producing wine at Domaine Sainte Rose in the Languedoc for the past 16 years) in order to purchase tanks and borrow an extra press.

“The problem with England is that there’s a lot of vineyards but relatively few wineries,” said Simpson who added that at least three people have been in touch with him to ask if Simpsons could do contract winemaking this year. 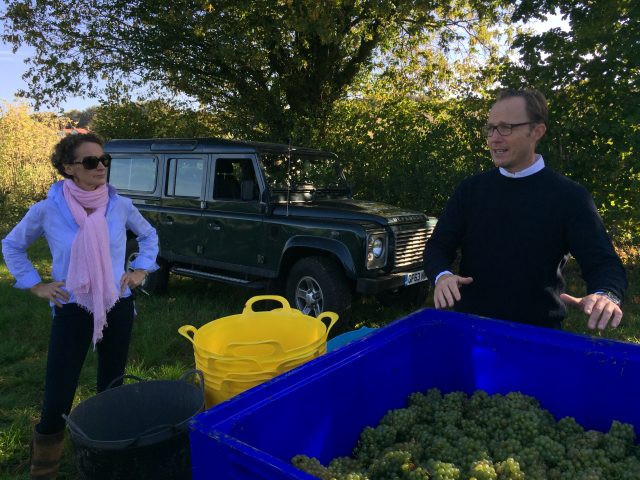 “The big issue this year is where the grapes are going to go. Even a 10 to 20% increase would be an issue, but this year it’s well over 100%. In July we were desperately trying to find some extra tanks, and when we contacted our English suppliers they simply told us to get in the line”.

Fortunately for the Kent producer, contacts in the Languedoc solved the problem and four 10,000 litre capacity tanks arrived the day before picking commenced. Simpsons already has permission to expand its winery to include a further press and additional tanks once its third plantation becomes commercial next year. However, due to the large volumes this year, it has had to bring forward its plans.

Ruth Simpson added: “It’s a good problem to have, but there has been a panic. I see a huge opportunity for contract winemakers in this country as the ones that do exist are already full, and there are very few places that people can take grapes”.

Simpsons already collaborates with other wineries in Kent, for example Westerham-based Squerryes, for procedures such as disgorgement, in order for there to be a sufficient volume of wine for specialists to process. 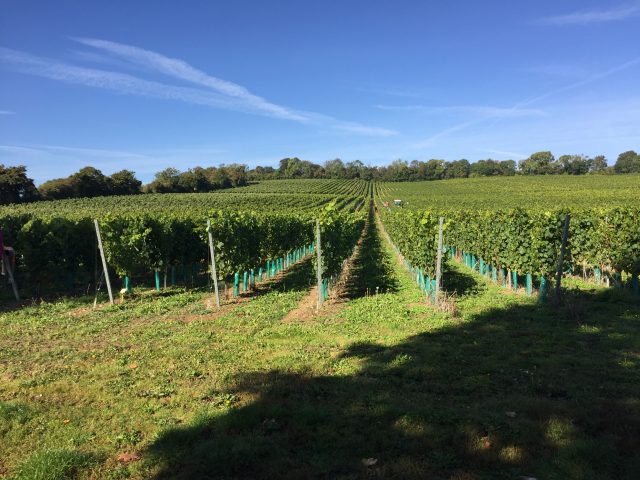 Do it our way

Speaking to WLC Charles Simpson said that 2018 was the first year that they’d been in charge of the harvest date.

“We’re taking longer to harvest this year as we have a larger crop which takes longer to ripen,” he said.

“The ‘Beast from the East’ earlier this year was actually really good for us as it kept things behind and meant we avoided early frost damage.

“The year before we had 20 degree days in March leading to an early bud burst, and when the frost came, we lost 60% of our crop.

“This year we can take in the grapes when we need to. There has always been some sort of pressure before, whether it’s disease or the weather. This is the first time that we’ve been able to properly decide when to do it.

“I liken it the different stages of ripeness of a banana – we can now pick at all stages of the grape’s ripeness to get the full flavour spectrum”.

“Our biggest concern is the supply of labourers and the free movement of people,” said Ruth Simpson.

“We mainly employ eastern European pickers which is a well-established tradition in Kent – the fruit garden of England. These workers have previously been picking in the orchards”.

While the producer is not yet facing any problems, once its other vineyard site matures and becomes commercial next year, it will require more than double its current workforce of pickers.

The owners of Simpsons are candid about how they have never planned to rely solely on the domestic market in order to sell their wine.

Having created the Wine Garden of Kent, which was unveiled earlier this year, the couple, along with six other Kent wine producers are planning to make an easy-to-navigate wine trail with accommodation and high-end food. This concept and its website will be marketed internationally with assistance from Visit Kent. The website will ultimately have the capacity to create an itinerary as well as provide transport links to and from the wineries.

“People are very enthusiastic about English wine and we need to make use of this and make it easy for them to visit wineries,” said Charles Simpson.

“Between us we have great facilities – the new tasting room at Hush Heath is the best in the country, it really is that good.

“Our goal is to create a Napa Valley-esque wine trail in Kent”.

At Simpsons itself, the couple have plans to create a ‘Pokemon Go-style’ app with a self-guided tour of the vineyard, while they also have what is thought to be the only winery equipped with a helter skelter.

The Simpsons told visitors to its winery last Friday that they had already been impressed with the knowledge of English wines overseas, particularly in the US.

“There’s a big opportunity to develop our export market and we’re already planning our launch in the States and have been talking to a Danish supplier too,” said Simpson.

“In the US they understand British luxury goods, which is what we’re marketing our wines as. When we traveled to America this year we were blown away by their knowledge of the product”.

It seems there’s plenty of demand too. Nyetimber may have thought they’d released the most expensive English wine (£175) last month, but a bottle of Simpsons still Chardonnay sold for $750 at a charity auction in Colorado Springs earlier this year.

SIMPSONS WINE: WHY DO BACCHUS WHEN WE CAN MAKE GREAT CHARDONNAY IN ENGLAND?

ENGLISH FIZZ SUPPLY IS SET TO DOUBLE – BUT WILL THE DEMAND FOLLOW?