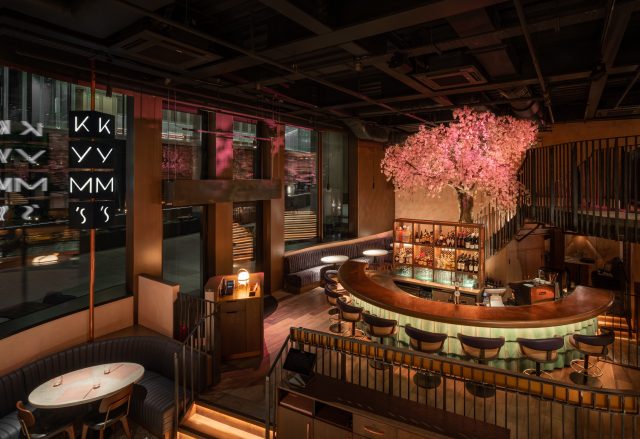 Riding high from a Michelin star at his Pimlico original, A. Wong, anthropology graduate Andrew’s innovative spirit is felt even more acutely here.

Named after Andrew’s beloved grandmother, who taught him how to cook, Kym’s bills itself as a ‘modern casual Chinese’, and makes a hero of Cantonese roast meats that are so painstakingly prepared, some of them take two days to make.

The décor: Set across two levels, the focal point of the restaurant is a horseshoe-shaped bar. Behind it is a giant cherry tree with an explosion of pale pink blossom that’s so abundant it reaches the ceiling and caresses the staircase.

The pale pink detailing stretches to the menus, which are printed on a single page of pink paper and double as tablemats to mop up rogue splashes of sweet chilli and soy. The high-ceilinged space was buzzing on my midweek visit with a mix of City suits, first dates and food fanatics.

Golden ducks hang from hooks in the open kitchen, where artfully inked chefs wield giant silver knives that could cut a kitten in two.

The food: Andrew first got the idea for the restaurant when gazing upon an ancient etching on a wall in China of a group of people roasting meats, which inspired him to master the sophisticated process, while adding his own playful twists to Chinese classics.

Divided up into small plates, sharing plates, ‘classics’, sides and sweets, there is so much to love on the menu it’s tempting to order the whole lot, particularly as the prices are so reasonable.

For just £3 you can order a rice cracker the size of a small planet, served with a pleasingly tangy ‘1908’ ketchup, which tasted more like HP, much to my delight. Flecked with poppy seeds and sprinkled with seaweed, the crispy cracker takes up the entire table, and is a meal in itself. It’s well worth ordering for the theatre alone.

One of the most joyful dishes I tried was a deceptively simple looking lemongrass salad loaded with peanuts, chilli and lime, which was so packed with salty, sweet, sour and umami flavours, I wanted to lick the plate clean. It’s a steal at just £5.50.

Equally divine were the sweet and sour pork ribs with sesame and star anise. Glossy with a treacle-sweet glaze, the sweet meat glided off the bone. I was happy to see Wong’s signature knife cut noodles with garlic and soy on the menu.

One of the surprise hits during dinner at A. Wong, the noodles luxuriate in a rich, salty, soy-laced sauce loaded with garlic, which is so moreish, I have to exercise super human levels of restraint not to upend the entire bowl into my mouth.

The only miss of the evening were the aubergine fritters with soy caramel and sesame, which were stodgy in the extreme and dripping with oil.

Signature dishes: Sure to become an Instagram hit are the wild mushroom steamed buns, which are cleverly fashioned to look like chestnut mushrooms. Inside, their fluffy innards mingle with the earthy woodiness of the shrooms.

Meat mavens mustn’t miss the Three Treasure bonanza; a holy trinity of crispy pork belly, soy chicken and Ibérico pork char sui served with honey mustard, ginger relish and honey soy. A word of warning – all three are so tasty you’ll be fighting your dining buddy for them.

While other critics have waxed lyrical about the soy chicken, which was indeed very good, particularly when dipped in its buttery ginger bath, the star of the show was the char sui and honey soy, which, in its smoky sweetness, reminded me of the divine union of maple and bacon.

One of the highlights of the evening was the pork and shrimp ‘bao bao’ – Wong’s playful Chinese twist on Middle Eastern brunch favourite shakshuka, which is fast becoming his signature dish.

Served in a cast iron skillet, nestled among the piping hot dumplings are gooey fried eggs with sunshine yellow yolks, spring onions and golden nuggets of crispy chilli. I loved the pleasing lick of fire running through it – this is hangover food at its finest.

The drinks: The cocktail list is worth exploring. Negroni lovers will enjoy Kym’s Asian twist with the addition of yuzu, while the Mandarin Collins sounds dangerously drinkable. My Sichuan Sour was pretty as a picture and the ideal apéritif with its gentle citrus flavours.

The wine offering is small and interesting, and includes a 2015 Zinfandel from Ridge and Rafael Palacios’ Louro Godello 2016 from Valdeorras – the man behind some of the best whites in Spain.

My Cretan Assyrtiko was as fresh and bright as I hoped, while a 2012 Monastrell from Alicante made by Telmo Rodriguez charmed with notes of raspberry, cherry, wild herbs and warming spices.

Who to know: The main man himself – Andrew Wong – who is currently dividing his time between Kym’s and his Pimlico mothership. A special mention must also go to our handsome waiter Lorne, who dealt with our every request with easy charm. If you’re lucky enough to have him look after you, ask him the story behind the fox and the geisha tattoos weaving up his arm.

Don’t leave without: Taking a photo of the cherry tree for your social media feed then ordering dessert. There are just two on offer. The Hong Kong pineapple bun is wonderfully indulgent – a light, fluffy, buttery, half moon-shaped cake dusted with flour and a dollop of custard.

The cake doesn’t contain any pineapple, but the flavour comes through powerfully from tiny cubes of the fruit served alongside it.

Last word: I’m not alone in being effusive in my praise for Kym’s, but it’s wholly justified as there’s so much to love about the place. It’s a joyful little space serving exciting, delicious dishes that zap your taste buds with punchy flavours.

While some places feel contrived, there’s an authenticity to Kym’s and an un-showy confidence that comes from cooking exactly the food you want to cook. The prices are very reasonable too, particularly for central London. Kym’s is an instant hit. Go now while you can still get a reservation.