Extract blurb: Tom Hawkins, legendary landlord and wine merchant, has built a micro-winery in the cellar beneath his London pub. On a whim, Felix Hart, our hero, persuades Hawkins to make a wine from the Pinot Noir vine growing in Hart’s garden, a jape that will prove to have quite astonishing consequences… 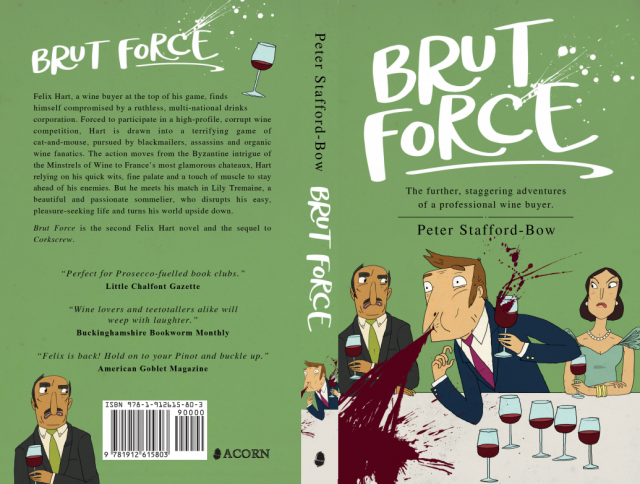 We parked in the courtyard of the Flag and Parrot and formed a conveyor belt, passing the crates of grapes to one another and down through the barrel hatch into the cellar. There, Hawkins’s winemaker inspected the harvest, tugging at his goatee as he prodded and turned the bunches, checking for rot. Every so often, he pulled off a grape and tasted it, before swallowing it down, pips and all. He even bit off a piece of stem, chewing the green twig and frowning.

“I’ll be blowed,” he muttered. “The fruit’s riper than a Barossa jam tart, but your stems are tender as new rosemary.”

The winemaker ignored me and began tipping the contents of each crate into a metal trough.

“I’m going to do whole bunch fermentation. No destemming. We’ll get a bit of carbonic maceration going first.”

Now, I knew this was pretty cutting-edge stuff, proper beards-and-sandals, non-interventionist winemaking. I felt a little pang of pride that a professional had rated my haul of rustic berries worthy of such treatment. The winemaker emptied the final crate into the tank, pushed the grapes down with a wooden paddle, and placed a lid over the vessel.

“I do declare that London’s first Pinot Noir vintage is undergoing fermentation,” said Hawkins from behind his pewter tankard. “That’s got to be worth a celebration.”

He turned to the upturned barrel beside him, on which sat a bottle of Champagne and a short, thick sword. I’d seen Hawkins do this a few times, it was his party trick. He took a few seconds to stuff his irregularly shaped hand into the sabre’s guard, swearing under his breath, then grasped the Champagne by its base.

I moved back a few feet. Hawkins had been drinking all day and I’d always felt his low finger-count was a poor advertisement for his swordsmanship. He scraped the back of the blade up and down the bottle a couple of times then, with a loud “Hoy!”, skimmed the sabre up and bumped it against the lip. The bottle made a loud clink and the neck remained completely intact.

“Oh, for God’s sake!” moaned Hawkins and thumped the bottle back down on the barrel, whereupon it exploded with a deafening bang. A spray of Champagne and broken glass filled the room and I closed my eyes as pieces of bottle ricocheted off the steel tanks.

“Everyone still got their eyes?” called Hawkins.

“You are officially bloody barred from your own pub, Hawkins,” growled the winemaker, gently dabbing his face with his apron.

“Ah, shut up, Bruce,” said Hawkins, “must have been a faulty one.” He peered at the barrel and triumphantly lifted the only recognisable remnant of the bottle, an inch-tall piece of the base.

“Waste not, want not. Cheers!” Hawkins took a sip from the jagged stump, screwed up his face and spat a piece of glass on to the floor.

“Glad we got the grapes in the press before you started celebrating,” said the winemaker. “I don’t think ground glass is an approved additive under EU law.”

“Bugger the EU,” growled Hawkins. “How long are you keeping it on the skins?”

“We’ll give it two weeks. I’ll add a tiny bit of sulphur but otherwise keep it completely natural.”

“Is it organic, man?” called Fistule, from underneath one of the tanks.

“You tell me,” replied the winemaker. “If the grapes are organic, so is the wine.”

“Those grapes are totally organic; I guarantee it.”

“Well, there you go. We’ve got very little volume here, so we may as well try something special. I’ll leave it on the lees through to malo, keep the filtration really gentle, no fining, nitro blanket…”

“It means he’s not going to muck it about, Fistule. It’ll be as natural a wine as possible.”

“I’ll rack it into barrel next month. It’s going to age faster in that funny little cask.” The winemaker nodded at the demi-rundlet balanced atop the wall of larger barrels. “We’ll taste it every few months to check it’s not spoiled but it’s up to you really. Give it a year. Two if you like.”

“Good things come to those who wait, Fistule. There’s plenty to drink in the meantime,” I said.

And thus, the first vintage of my Little Chalfont Pinot Noir was born. And if I’d known then what I know now, I’d have opened the tank’s valves that very second, drained the juice on to the cellar floor, taken old man Hawkins’s sabre and slashed that little barrel into a thousand pieces.

Brut Force is the sequel to Corkscrew: the highly improbable, but occasionally true, tale of a professional wine buyer – a picaresque, satirical tale drawing on the author’s early years working as an international wine buyer for some of the world’s largest retailers.

In Brut Force, Felix Hart, a wine buyer at the top of his game, finds himself compromised by a ruthless, multinational drinks corporation.

Forced to participate in a high-profile, corrupt wine tasting, Hart is drawn into a terrifying game of cat-and-mouse, pursued by blackmailers, assassins and organic wine fanatics.

The action moves from the Byzantine intrigue of the Minstrels of Wine to France’s most glamorous chateaux, Hart relying on his quick wits, fine palate and a touch of muscle to stay ahead of his enemies. But he meets his match in Lily Tremaine, a beautiful and passionate sommelier, who disrupts his easy, pleasure-seeking life and turns his world upside down.

Brut Force (£9.99, Acorn Independent Press) and Corkscrew (£10.99, Thistle Publishing) are available to order in bookshops and on Amazon here.

Peter Stafford-Bow is a novelist and wine consultant, based in London. He is a noted public speaker, wine educator and a regular on the literary festival circuit. He has been nominated for the People’s Book Prize for Corkscrew with the winner due to be announced in May 2019.