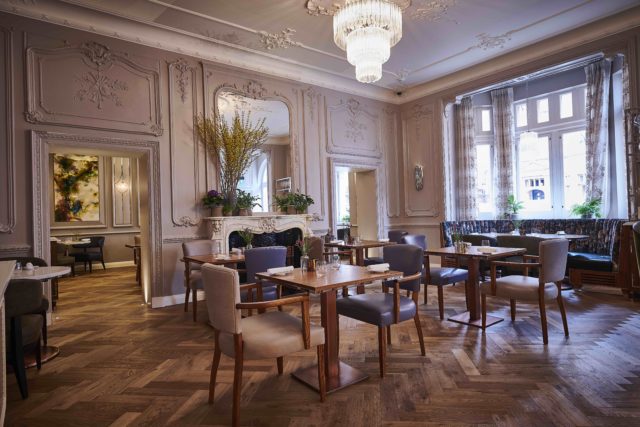 The concept: Having opened three restaurants in as many years, Adam Handling is one of the most ambitious young chefs working in London.

Named Scottish Young Chef of the Year in 2015, a year later Handling opened his first restaurant – The Frog – in Ely’s Yard behind the Truman Brewery in Spitalfields. A second Frog popped up in Covent Garden in 2017 and has become Adam’s flagship site with its own cocktail bar, Eve.

Having relocated his original Frog site to a larger space in Hoxton Square last summer, this February Handling opened his latest venture – an eponymous restaurant and destination bar within the recently reopened Belmond Cadogan Hotel in Chelsea.

The décor: Built in 1887 in the Queen Anne style, the hotel has a colourful past, having once been the home of King Edward VII’s mistress, actress Lillie Langtry, who courted the philandering royal prior to his coronation. It was also the location of Oscar Wilde’s arrest for “gross indecency” in April 1895.

The restaurant is set in what was once Lillie Langtry’s living room, and many of its original features have been faithfully maintained, from the stucco ceiling and the original fireplace to the intricate detailing on the walls.

While this is a fine dining venue, the buzzy atmosphere, modern music and lack of starched tablecloths immediately set the tone for the relaxing meal that followed.

Guests get to see Adam in action in the open kitchen lined with trendy low-hung copper lights at the restaurant’s entrance. There are four spots at the counter for diners keen to get close to the action, though we preferred our vantage point at a marble-topped table in the first of two intimate dining rooms.

The food: Handling’s ethos is simple – to work with fresh seasonal ingredients that show off both his technical flair and the best of local British produce. His plates are painterly in their precision, and are beautiful to look at.

Our meal began, as any fine feast should, with lashings of Handling’s famous chicken butter, which has proved so popular since his Spitalfields days that he now sells it at his deli, Bean & Wheat in Old Street.

The creamy quenelle is topped with salty slivers of chicken skin that add to the irresistible intensity of the chicken flavour. Its arrival at the table proved dangerous.

Having never had the pleasure of it before, my mother took to the butter with impish enthusiasm and polished off the entire scoop almost single-handedly. We asked for more and our wish was granted, the heavenly umami-rich creation threatening to annihilate our appetites.

While almost everything on the seven-course tasting menu looked appealing, we opted instead to go à la carte. My starter of confit foie gras with smoked eel, Pink Fir potatoes and hispi cabbage was served in a pretty sliver topped with feather-light potato puffs and tiny shards of crunchy cabbage.

Hidden beneath the potato puffs were tiny cubes of apple, which added welcome acidity to the decadent dish, where the creaminess of the foie gras and the smokiness of the eel were so complementary, it was hard to tell where one flavour finished and the other began.

Signature dishes: Adam Handling fans will be happy to hear that a number of his greatest hits are on the menu in Chelsea, including ‘Mother’, an earthy marriage of celeriac, truffle shavings, egg yolk and apple.

The highlight of the meal came early on in the form of butter-poached king crab with carrot and sorrel. The simple sounding dish delivered a divine combination of flavours, the sweetness of the crab echoed in the carrot, and offset by the freshness of the sorrel and the pleasing tang of the creamy ranch sauce loaded with dill, oregano and shallots.

While dishes will change depending on the season, one of the stars of the show at his Covent Garden flagship is Handling’s halibut, mostly due to the heavenly sauce it comes swimming in. His remix of the dish in Chelsea didn’t quite have the wow factor of the original but illustrated the power of a sublime sauce to elevate a dish from good to extraordinary.

The sides are well worth exploring too – crunchy shards of asparagus came with a vivid dollop of sprightly leek Béarnaise, while a piping-hot mound of truffle mash was as indulgent as it sounds.

The drinks: The libations are looked after by the energetic and endlessly entertaining group head sommelier, Kelvin McCabe, who dispenses nuggets of wine knowledge with such enthusiasm, it feels like he’s intimately acquainted with each and every grower.

It’s well worth beginning the evening with a cocktail in the destination bar at the front of the hotel. Menus are playfully presented within blue leather books. Each menu comes with its own apéritif – a refreshing mixture of gin, lip-smacking lime and orange curaçao designed to be sipped while you pick your next cocktail.

The wine list takes in the world’s key wine regions and prices reflect their Chelsea postcode, with glasses starting at £8.50. Among the liquid treasures currently offered via Coravin are Bollinger’s little-known red, La Côte Aux Enfants; Seña 2010 from magnum; and Château Pichon Comtesse 1995.

Among the wine highlights enjoyed during our visit were an elegant Granny Smith apple-laced glass of English fizz from Ambriel estate in West Sussex, and a super smashable Robert Oatley G-17 McLaren Vale Grenache loaded with juicy cherries and tart raspberries made by the ever brilliant Larry Cherubino.

Who to know: While Adam is a busy man splitting his time between three sites, you might be lucky enough to spot him at the pass on your visit. Wine nuts should seek out sommelier Kelvin McCabe and be left in his capable hands.

Don’t leave without: Swinging by the bar for a cocktail before or after your meal, or both if you’re feeling particularly louche.

Last word: I’ve been a big fan of Handling from the get-go and his food continues to shine at his most upmarket location to date. Handling’s understanding of how to cleverly marry flavours so that they become greater than the sum of their parts is impressive, as is his attention to detail and exquisite presentation, but perhaps it’s his mastery of sauces that really sets him apart.

Handling is reaching for a (Michelin) star here, and clearly deserves one. His exciting refined food has found a happy home in Cheslea, but the London dining scene is so fickle at the moment, he’ll need a loyal pool of regulars to flourish.