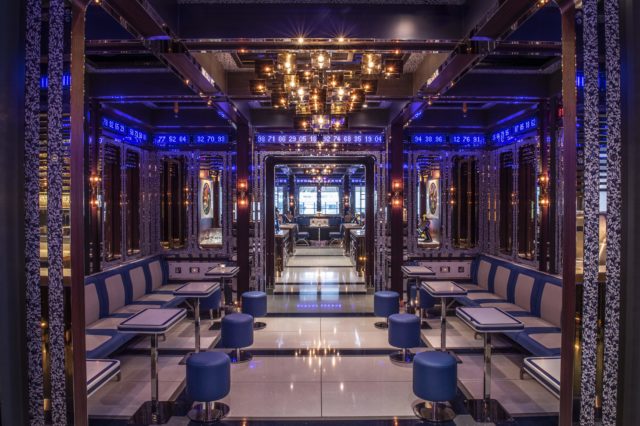 The concept: Bob Bob Cité is the long-awaited, much-hyped second act of Russian restaurateur Leonid Shutov. Five years in the planning and 16 months late to open, the restaurant resides on the third floor of the Leadenhall Building, affectionately known as the ‘Cheesegrater’, in the City’s beating heart, which is accessed via a shiny, Duck & Waffle-style great glass elevator.

Shutov’s original, Bob Bob Ricard, opened in Soho in 2008. Modelled on a vintage Orient Express train, with its royal blue velvet booths and ‘press for Champagne’ button, the restaurant offered much-needed whimsy during the dark days of the recession.

With Brexit looming, 2019 seems an apt moment for Shutov’s sequel, which cost in the region of £25 million to create – somewhere outlandish enough to make you temporarily forget that we’re hurtling towards political oblivion.

The décor: While Bob Bob Ricard feels very Murder on the Orient Express, Bob Bob Cité is inspired by the glamourous golden age of aviation.

The attention to detail at the venue is astounding, from the bursts of purple orchids ordered in by the bucket-load each week, to the immaculate Brooks Brothers blazers with shiny gold buttons sported by the waiters. Shutov even had a hand in designing the bespoke Wedgwood crockery.

More fantastical in feel than BBR, the main 180-cover restaurant is accessed via a glittering labyrinthine maze of mirror-polished steel that opens out into a retro futuristic bar, which feels part luxury train carriage part first class lounge.

Meeting a poet friend at the bar before dinner, he said the plush surroundings were bringing out his inner aristocrat and may well inspire a line or two. Inside the main restaurant, blue table numbers flash across the walls, Matrix style, like a ticker tape display on a trading floor, turning red when you press for Champagne.

All diners get their own booths, which feature phone charger and USB sockets – a detail I’m loath to like, as it encourages people to stay attached to their phones rather than switch off for a few hours and be present in the moment.

The booths’ blue and white leather banquettes, created by Brady Williams design studio, look like they belong on a Pan Am jet. A second adjoining dining room is almost an exact replica of the main room, only in red.

The food: While the décor may be a flight of fancy, the menu reads like a comforting roll call of French classics, from onion soup blanketed in gooey Comté, to a simple crab mayonnaise starter and indulgent île flottante pud.

In charge of the menu is Eric Chavot, last seen in London at his eponymous Brasserie Chavot in Mayfair. Inspired by his native Arcachon in southwest France, Chavot adds decadent twists to classic dishes – his Jersey rock oysters are baked with black truffle hollandaise (£18), while mac and cheese (£29.50) is given the gourmet treatment via the addition of grilled lobster and lashings of Gruyère.

Some of the most exciting dishes were the sides. The truffle mash (£10) was almost entirely made of butter, which is no bad thing in my book. Earthy, creamy and comforting in the extreme, it was incredibly hard to share. The virtuous sounding grilled hispi cabbage (£8) meanwhile, was a revelation, the char from the grill rendering it smoky and meat-like, but with wonderful crunch.

Chavot’s dessert game is also strong. My lemon tart (£13) came with a generous swoosh of zingy lemon curd, a scoop of tart lemon sorbet and delicate dollops of crunchy meringue resting on a buttery biscuit base. Though light on its feet, it packed a flavour punch.

Signature dishes: While not a fan of snails, having seen many a pretty picture of the dish on social media, I felt obliged to order the escargots en persillade (£14.50).

A joyous ensemble, each little snail lay hidden beneath clouds of potato foam flecked with crispy bacon crumbs and salty croutons amid a pond of assertive garlic and parsley butter.

Diving into one of the clouds, I wasn’t sure if I’d managed to snag a snail until I popped the mound of molten potato in my mouth and all the glorious flavours entwined.

The snails themselves were silky and delicious – a far cry from the chewy critters I’ve previously encountered. The dish made me fall back in love not only with snails, but classic French cooking.

Having enjoyed the best steak tartare of my life at Brasserie Chavot, hopes were high for Bob Bob Cité’s version (£15.50). A soft boiled duck egg rested daintily on top, its sunshine yellow yolk oozing onto the raw meat beneath, which was enlivened by salty capers and tangy cubes of gherkin.

I had the option of pimping my tartare with a generous quenelle of Siberian sturgeon caviar, but opted to enjoy it naked, worried the salty caviar may overpower the subtle flavour of the Scottish beef, which came into its own when slathered across hunks of salty, lightly-charred bread.

The drinks: Leonid is as mad about wine as he is about interior design, and his list is one to drool over. Formed of 150 bins, the offering is French accented, taking in the classic regions of Bordeaux, Burgundy and beyond.

We were treated to a grand tour of the cellars, which were heaving with imperials of Margaux, Mouton, Latour, Pichon and other Bordeaux heavyweights. Across the corridor, in the Champagne room we were greeted by glinting Jeroboams of Cristal, Dom Pérignon, Perrier-Jouët and Pol Roger – it was enough to make a wine lover weep.

The by the glass offering moves beyond the confines of France via the likes of Kaiken Malbec from Mendoza (£11), Tinpot Hut Pinot from Marlborough (£12) and La Giustiniana Gavi di Gavi from Piedmont (£10.50). I stayed in France with an exquisite glass of 2016 Domaine Sylvain Bzikot Puligny-Montrachet (£20), which charmed with notes of nectarine, peach, honeysuckle and citrus.

On the red front, a glass of 2010 Château Siran Margaux (£21.50) was incredibly elegant with its silky tannins and notes of cassis, blackberry, plum and pepper. The wine highlight however, came at the end of the night when I noticed that my vintage of Château Yquem – 1983 – was on pour by the glass (£65). Too good an opportunity to miss, if there had been a ‘press for Yquem’ button I would have pushed it.

A glorious amber hue, the nose was a complex symphony of marmalade, pineapple, coconut and caramel, the texture hedonistically unctuous. If God made wine it would taste like this.

Who to know: Impeccably mannered restaurant manager Marcel Cerulik will give you a tour of the cellars and private dining rooms if you ask him nicely.

Don’t leave without: Pressing for Champagne. No trip to Bob Bob Cité is complete without it. Feeling a little trigger happy, we pushed the button at the beginning and end of our meal, starting with a glorious glass of Billcart-Salmon rosé, which was a celebration of summer fruit flavours, and ending with a flute of Bollinger Special Cuvée, which was as bold and biscuity as I hoped it would be.

What could be done better: It’s hard to find fault with the venue, which is more of a special occasion spot than a regular haunt. While it’s easy to lunch like a lord, gorging on caviar and truffles and clocking up a hefty bill, many of the dishes are moderately priced given the spectacular setting.

Last word: Bob Bob Cité was worth the wait. Shutov is clearly a perfectionist who wanted all his ducks in a row before the grand opening. While there are elements of the original that will please BBR fans, the follow-up is very much its own beast, which will delight both City boys maxing out company credit cards and out-of-towners keen for a night of London glamour.

While wonderfully whimsical, the French cuisine is anchored to Arcachon, and is comfortingly classic without being clichéd. A night in its clutches feels like being in a Wes Anderson film. With its ample seating, you’re encouraged to linger late into the night and keep pressing for Champagne like an impatient oligarch.