db’s Eleanor Field heads to Big Mamma’s flamboyant Circolo Popolare in Fitzrovia for decadent servings of pesto burrata, truffle pasta and a Pecorino from Abruzzo described as the “Ryan Gosling of whites”. 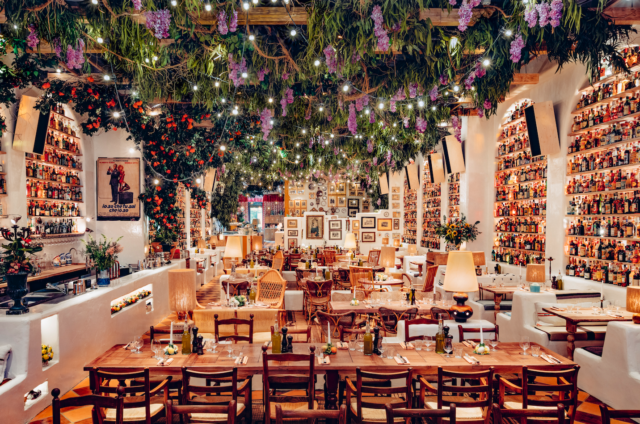 The concept: There are some restaurants that you depart with the knowledge that a snack or two may be required before bedtime but Fitzrovia’s Circolo Popolare certainly isn’t one of them. The latest venture from Parisian restaurant group Big Mamma and the little sister of Gloria, which opened in Shoreditch earlier this year with much furore, Circolo Popolare is about big, Honey I Blew Up the Kid, decadent versions of classic Italian dishes to be consumed in lavishly decorated interiors.

The décor: Once you have fought your way through the crowds bedecking the entrance, you are instantly met with the scent of the abundance of dried leaves and flowers which adorn the ceiling of the cavernous space. Every square inch of the 280-cover restaurant is festooned with knick-knacks, pictures and plants, while floor to ceiling shelves flanking each wall hold 50,000 bottles of alcohol, backlit and incandescent, which the manager explains took 15 days to put in place.

The music is a selection of 1980’s classics reminiscent of the soundtrack of Cocktail while dishes are served on mis-matching vibrant classic Italian ceramics, adding to the restaurant’s sense of unchecked fun. At around 9pm, the lights go down and flickering candles are placed on each table. 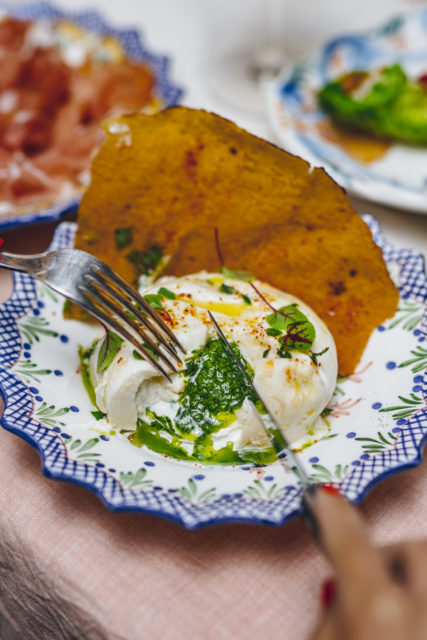 The food: Inspired by the Sicilian coast, the menu features Big Mamma creations from metre long pizzas designed for sharing to the ‘XXL Sundae’. As with the interiors, OTT is key here. Crescent shaped pork pastries resembling Cornish pasties are rich, hot and buttery and satisfyingly accompanied by a cooling yoghurt and dill sauce.

Perhaps most impressive is the gigantic ‘Burrata with pesto heart,’ egg-like and gleaming, ensconced in a crisp shell of pane carasau. Cutting into this burrata is quite an event, revealing garlicky pesto and dollops of glossy cream, perfect for dipping. Battered courgette flowers are chip-like in crispiness and perfectly salted.

Next came ‘Malfaldine al Tartufo’ with Molise truffle, mascarpone and button mushrooms. Rich and creamy, the perfectly al dente fronds are served in a miniature frying pan topped with luxurious shavings of truffle, the taste of this delicacy very apparent throughout the dish. ‘The One and Only Carpaccio Pizza’ is impressively crispy and contrasts with the wafer thin beef and ample slivers of parmesan. A nearby table orders the ‘La Gran Carbonara’ which, with lashings of cream, egg yolk and guiancale, arrives in a hollow wheel of cheese on its own trolley.

Each dish is so decadent, it can be hard to make a significant dent but despite the consistent queues outside, the waiters thankfully allow generous amounts of time between each course.

For dessert, a lemon meringue pie arrives like an iceberg and makes us wonder how two people could manage to finish it, let alone one. The zesty lemon tart base is delicious, the meringue evocative of toasted marshmallows in both flavour and texture. The tiramisu is served at the table in slices from a large patterned dish with guests informed to ‘say when’. Intensely creamy, it is perhaps lacking in coffee flavour for those who prefer the traditional version of the dessert, but this can be made up for by pairing with an espresso. 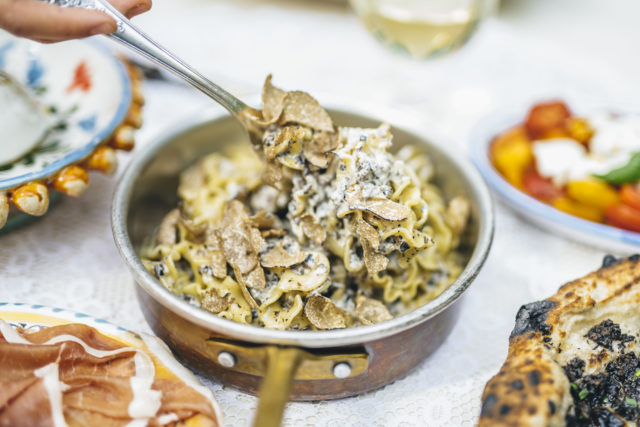 The wine: Bottles start at £27 and range up to £54 with glasses priced between £5 and £10 and the playful descriptions of each wine addressing the desires of individual guests. A sparkling rosé reads ‘Floral, rose, violet, vanilla, a pink sparkling delight for a girls’ night out’ while the most expensive white wine on the menu, a Pecorino from Abruzzo, is described as the ‘Ryan Gosling of whites’.

Priced at £33, a Montepulciano D’Abruzzo is spicy and fruity but with a flavour profile versatile enough to pair pleasingly with most of the dishes. Cocktails served in novelty ceramics are cause for frequent flurries of selfies throughout the restaurant while a selection of home-brewed craft beer, in partnership with Pig & Porter, range from £3 to £6.

Don’t leave without: Sampling a cocktail or two. An illustrated list printed on a laminated card in a 1950’s pink proffers tipples such as ‘The Little Mermaid’ consisting of blue spirulina, pear, coconut cream, lime and basil syrup; ‘The Kill-a’ with tequila, pink grapefruit, lime, lemongrass and salt; or the ‘Big Mamma’ made from vodka, lime cordial, Fever Tree Ginger Ale and fresh fruit.

Last word: With its eclectic interiors and decadent dishes, Circolo Popolare is certainly an experience and, if you can handle the queues, perfect for a date, celebration or simply a fun night out. The waiters are charming and appear unflustered by the continual bustle, perhaps due to the sense of excitement which each party exudes, having secured a table at one of the most hotly anticipated restaurants of the year. In a city where Italian cuisine has become the ‘It’ food of dining out, pasta could have got too serious. Circolo Popolare proves this won’t be the case any time soon.