Born in Germany, Michael Raebel started out in the food and drink industry in 1987 as an apprentice chef at restaurant Simon Boulevard in Berlin. Travelling to Austria and Israel, Raebel eventually became the head chef of Café Isaac in Tel Aviv. Having had some experience of bartender and waiting work, Raebel made the switch to front of house in 2006 with a stint as restaurant manager and sommelier in Restaurant Borchardt, Berlin. He moved to London to take up the role of assistant head sommelier at Pearl Restaurant, later moving to Rosewood London in 2013 and becoming head sommelier of on-site restaurant the Holborn Dining Room in 2014. 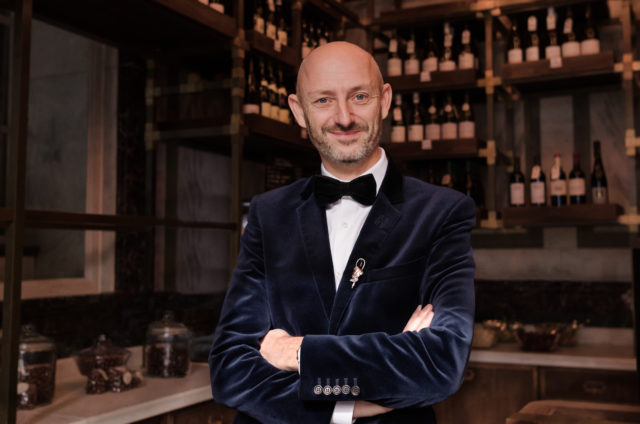 It was always my dream to work in a restaurant or pursue a career in the theatre. However, when I was 16, my parents decided that none of my desired careers were something they considered to be a “decent profession”. The closest I could get to my dream was starting an apprenticeship as a chef. I love cooking, but working in kitchens has none of the magic I found on the other side of the revolving door. By 21, I decided I was old enough to follow my own path, which led me to study theatre directing in Salzburg. To finance my studies, I worked as a waiter in a small family-owned hotel. That is where I had my first encounter with a sommelier. His skills seemed almost magical­ and I got completely hooked. After years of studying, I decided to leave the world of theatre and get professionally involved in restaurants. I never regretted my decision.

Sharing an experience. There is nothing like this feeling of immediate response when you hit the nerve by finding the right key and wine for the right guest. It’s almost an intimate moment, a moment of creating a friendship for a night or a lifetime.

Being a sommelier is not about drinking other peoples’ wine or selling the most expensive bottle possible. It is about creating a moment and let others experience the true meaning of hospitality. Behind the scenes there is a lot of administration communication, training and mentoring involved, especially at a big hotel like Rosewood London.

That depends on the day and varies from herbal tea to a glass of Condrieu or Pinot Gris from Alsace. If the day was really strenuous it would be a ‘Diplomatico Reserva’ and Coke.

There are probably a few, one that has stayed with me was during the opening of an old-timer car show in Berlin. I was part of a crew to serve some VIPs, among them was one of the members of the Chaplin family whom I was supposed to take special care of. The site was unfamiliar to me and the tables only knee-high. While bending down to serve the Champagne I lost balance of the tray, which tipped and showered my special VIP and I with it. She took it with good humour, but it was one of those moments where you wished desperately for a cloak of invisibility.

Travel, travel and travel: experience as many other restaurants in different cultures as possible. Try as much wine as possible, enjoy every minute of it and do not be intimidated by people who are pretending to have more knowledge than you.

It was an Austrian red wine blend by Andreas Gsellmann ‘Gabarinza’. The owner of the hotel I worked in Salzburg paired it with Parmesan. It was my first experience of a food and wine pairing where the umami flavours enhanced and highlighted the taste of the wine. I have never lost my fondness of Austrian red wines ever since.

There have been many but one that keeps coming back to me was an experience I had with my partner on one of our earliest camping tours.

We had a tiny tent and it was bucketing down with rain, we were stranded somewhere in Burgundy on a campsite drinking a bottle of Bourgogne Blanc by Domaine Leflaive. The wine was far too warm but I will never forget this moment shared intimacy with a loved one and the exploding flavours while the storm was raging around us.

Guests who turn their wine glass upside down to indicate that they do not want to drink, or turn their empty bottle upside down in an ice bucket. It is the lack of communication and trust in my abilities to anticipate my guests’ need that gets to me.

That would be Gunnar Tietz, former the chief sommelier of the Palace Hotel in Berlin. He came from a sports background and was the first one to show me the path of the sommelier.

I always liked Vin Jaune but the pairing which really opened my heart and eyes was Comté cheese with truffles, black walnuts and Vin Jaune.

It would be a Burgundian vineyard planted with Pinot Noir on the backdrop of the German Alps, overlooking the coastline of Barcelona.

I would be an actor on stage, because those professions are so similar.

I am sorry to admit this, but I believe that would be Pinotage. I’ve never understood the popularity of this crossing.

Hillary Clinton in Berlin. She was Senator at the time and on a state visit. She was so refined and humble and interested, and I still remember after all those years that she was eating roasted quail.

It is the professionalism and diversity of the industry. There is no place like London when it comes to the variety of wine available and London has few of the best wine schools in the world.

I really would like to try some old vintages of Silvaner which apparently ages very well but are impossible to find. Traveling to Jerez and try some single barrels of Sherry or discovering the vineyards of South Africa are on my to-do list along with more and more of Coche Dury and Armand Rousseau.

One of my favourite pairings is our steak and kidney pudding with Chåteau Musar 1999. A match made in heaven. The slow-roasted creamy ox-cheeks spiced with the gamey texture of the kidneys works so wonderfully well with those elegant tobacco and roasted chestnuts notes and the whiff of farmyard. The light and refreshing texture of the 1999 vintage cuts right through the rich gravy goodness that is served with this pudding.