This year’s record-breaking Michelin Guide saw the most number of stars awarded, Manchester gain its first Michelin star in over 40 years and the second restaurant with a vineyard to be featured in the guide. 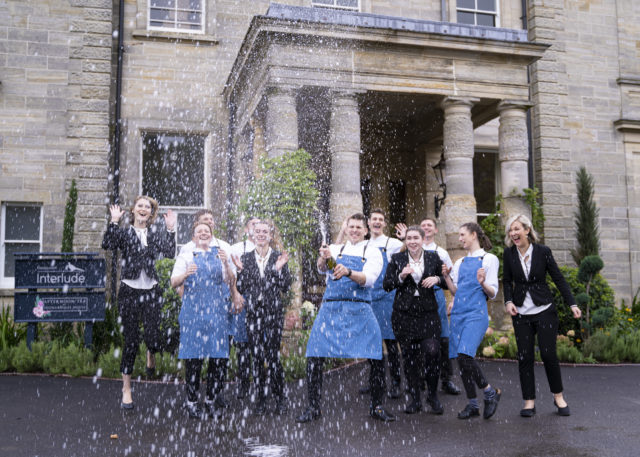 Interlude, set in the grounds of the recently restored Leonardslee Gardens in West Sussex, picked up its first star under the stewardship of South African-born executive chef Jean Delport. Interlude, which overlooks the UK’s first Pinotage vineyard planted in 2018, serves up tasting menus featuring ingredients foraged from the Grade I listed gardens and 240-acre Leonardslee estate.

It is the second UK restaurant with its own vineyard, alongside Lympstone Manor in Devon, to win a Michelin star. Chapel Down’s Swan Wine Kitchen in Tenterden picked up a Bib Gourmand last week.

Opened last October, the restaurant is open for dinner on Wednesday through to Saturday, with 10 tables.

Leonardslee is linked with nearby golf and wine estate Mannings Heath, with a total of 72,000 vines grown across both sites. The operation is owned by the Benguela Collection, which also operates properties in South Africa, and is owned by Penny Streeter OBE.

Speaking to the drinks business this morning, Delport, 31, who is only the second South African chef to be awarded a star for a restaurant, said he had achieved “his dream”.

“Winning a star has always been my goal but I didn’t expect it to come so soon,” he said, revealing that the restaurant has only been “properly trading” for 10 months following a soft launch period.

“Our concept of foraging has stayed the same, but we’ve refined it and it has got a bit more complicated.”

His achievement is all the more remarkable considering Delport arrived in England last year “during the Beast from the East”, and had just six months to get to grips with the ingredients, and set up his restaurant.

“This has all been a learning curve for me,” he continued. “The ingredients we use now are totally different to what I used to use in South Africa.

“Every course must have a link to the garden, so for the 21 dishes that we serve, 21 things must be taken from the garden.

“A star means the world to me. I know people say it shouldn’t as you should be cooking for other reasons, but I have sacrificed so much to be here.

“I uprooted my whole family to come to England where we knew no-one. My wife works along side me heading up the front-of-house. We don’t get Michelin stars in South Africa.

“The food and wine connection, however, has been a big thing in South Africa for some time, so it’s great to be able to bring this to the UK.”

Before coming to the UK, Delport worked for Streeter in her restaurant in Cape Town, having trained at Zevenwacht Chef School in South Africa. Also in the kitchen is Ruan Pretorius, who was the former head chef of Terroir in the Cape winelands before joining Delport at Interlude. 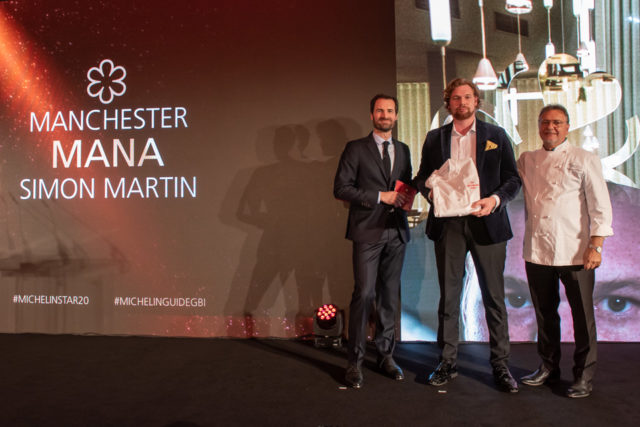 Moving north, the city of Manchester picked up is first Michelin star since 1975. The only other star that was awarded to a restaurant in the city centre in the past was to The French on Peter Street, which held one from 1974-1975, and is now headed up by chef Adam Reid. Juniper in Greater Manchester had a star until 2008.

This year Mana in Ancoats, run by 28-year-old chef Simon Martin, broke the city’s over 40-year stretch without a Michelin mention. Mana was among several restaurants in the city and Greater Manchester tipped for a star, including Where the Light Gets In, Adam Reid at The French, Enxaneta at Tast and Restaurant MCR.

Commenting on his achievement at the ceremony in at The Hurlingham Club in Fulham, London, Martin said: “It put quite a bit of pressure on. It’s something quite a lot of people expected from us from the start but it’s absolutely amazing to be here in front of all these people – it’s incredible.”

Rest of the UK and Ireland

As mentioned, a record number of stars were handed out to restaurants in the 2020 Michelin Guide. A total of 131 new establishments feature, including four new two-stars and 23 one-stars.

Sketch in London picked up the top three stars, while La Dame de Pic in the City of London, The Dining Room at Whatley Manor in Malmesbury, and The Greenhouse in Dublin were promoted from from one star to two. Ireland’s Aimsir in Celbridge went straight in at two stars, replicating Core by Clare Smyth’s feat last year.

Foodie hotspot the Lake District won big, with three restaurants awarded a star for the first time including Old Stamp House at Ambleside, Allium at Askham Hall in Askham and The Cottage in the Wood in Braithwaite.

The guide also noted that six of the new star winning restaurants were run by husband and wife teams.

In Wales the Beach House at Oxwich gained its first star, while in Northern Ireland, the Muddlers Club brought a third star to Belfast.

Scotland gained two new stars in the form of Condita in Edinburgh and the Isle of Eriska based on the island of the same name.

In Ireland three new restaurants were entered including Aimsir as well as Dublin’s Variety Jones and Bastion in Kinsale, both gaining one star.

High profile losses included London’s The Araki which lost all three stars, as well as Benares and Galvin at Windows (both London) that lost their stars. Outside London, losses included Gidleigh Park, West House, Fischer’s at Baslow Hall, Yorke Arms, and Samphire in England; 21212 in Edinburgh; and Tyddyn Llan in Llandrillo, Wales.

The UK and Ireland guide includes a total of 1,464 restaurants (187 awarded stars) including five three-star sites, 23 two-stars and 159 one stars. There were also 131 Bib Gourmands and 1,146 Michelin Plate restaurants.